Hat-trick: Le Normandie and Mezzaluna Have Received 2 MICHELIN Stars in Every Edition of The MICHELIN Guide Thailand

To absolutely nobody’s surprise, chef Arnaud Dunand Sauthier and chef Ryuki Kawasaki were back on stage at this year’s MICHELIN Star Revelation both accepting another two MICHELIN Stars for Le Normandie and Mezzaluna respectively. We sat down to chat with the two chefs about motivations and Alain Ducasse.

The landscape of Bangkok’s culinary world is ever-changing, but two places that are dependable in their excellence are Le Normandie and Mezzaluna, both of which have been recipients of double MICHELIN stars since the guide’s inaugural edition. Le Normandie, a restaurant whose name elicits reverential nods in all corners of the city, hardly needs an introduction—nor does chef de Cuisine Arnaud Dunand Sauthier. He’s been helming the kitchen of Le Normandie for over seven years and has been widely attributed as the reason it has become Bangkok’s premier destination for sophisticated French cuisine.

Chef Ryuki Kawasaki’s Japanese-inspired menu of Haute French cuisine holds equal allure. His sky-high restaurant on the 65th floor of lebua at State Tower was put on the map after the chef joined in 2015, and has continued to excite the culinary world since.

Both chefs were back on stage at the MICHELIN Revelation Thailand 2020 accepting their two stars for the third year in a row. We caught up with the two kitchen heroes to talk about motivations, culinary trends in Thailand, and whether Alain Ducasse is any sort of threat. 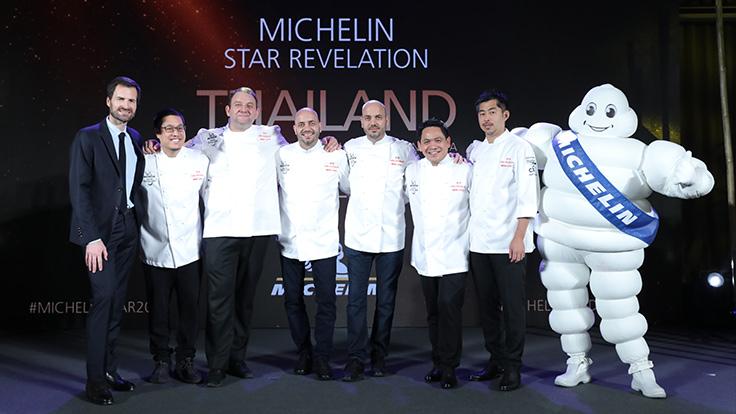 The full chefs line-up of 2 MICHELIN starred-restaurants at the MICHELIN Star Revelation Thailand 2020.

This is your third year receiving two MICHELIN Stars. What is your secret to maintaining the high standards?
Chef Arnaud: Consistency is everyday work. For my team and me, there isn’t much downtime. We use every day we have in the kitchen to improve, and with this, not only can we maintain what we’ve already achieved, but also work towards becoming even better.

Chef Ryuki: We are actually not trying to maintain what we have, we are trying to improve every day. It never just levels out, we need to always be striving for more.

Are you aiming for three MICHELIN Stars?
Chef Arnaud: Of course, we are aiming towards three MICHELIN stars. From the front of the house to the back of the house, the whole team at Le Normandie is working every day for it.
I guess if you are trying to get three stars, of course, you need to maintain two and just continue working to delight the guests.

Chef Ryuki: If you have one star, you’re going to want two. And if you have two stars, you’ll be shooting towards three. It never really ends. But I think we have a chance—Bangkok has the chance of having a three-starred restaurant, so at least we need to try. 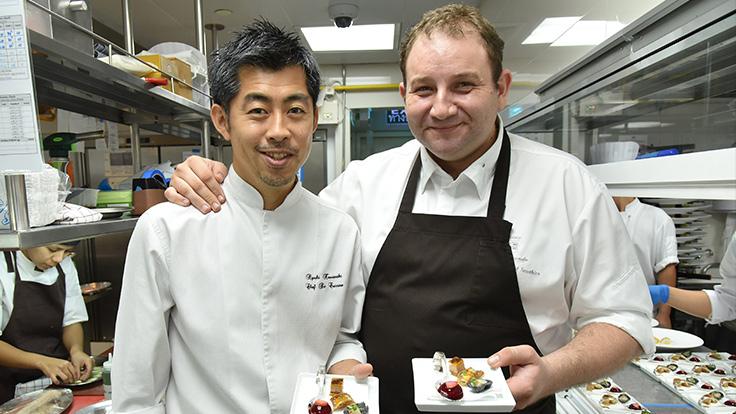 Chef Ryuki (left) and Chef Arnaud (right) have been friends for a long time. In 2018, they collaborated for the very first edition of the MICHELIN Guide Dining Series.

Are there any specific areas of improvement you’ll be focusing on?
Chef Arnaud: For me, it is always about consistency. Being consistent with your dishes and experience is the most complicated part, actually. But I am also working on more precision of flavours.

Chef Ryuki: The same as chef Arnaud. Precision and consistency are always something to work on improving. However, for me, I hone in on my specific unique style.

What are your plans for this upcoming year? Any big changes?
Chef Arnaud: This year we will continue to do what we’ve been trying to do from the start, delight our guests and be more precise about our identity and flavours. It’s really a continuation of our goal last year and the years before that: trying to improve and increase the value of the restaurant.

Chef Ryuki: My team has been strong for three years and every day we discuss our areas of improvement—things are always evolving. It doesn’t just happen in one day or one big change, it’s daily work, which, in my opinion, brings stronger results. So, no big plans, just small improvements that lead to big effects. 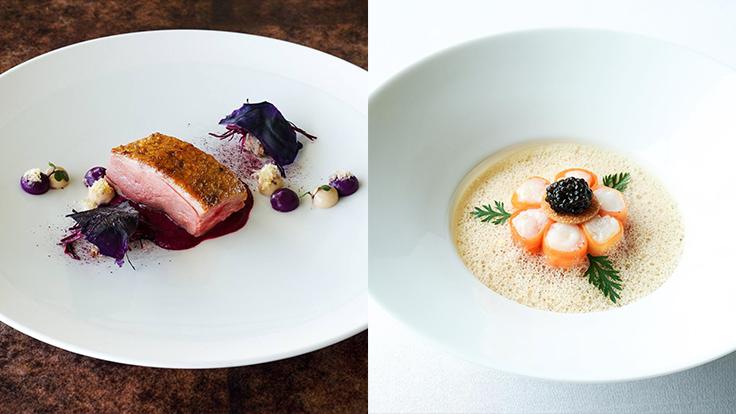 What culinary trends do you notice in Thailand today?
Chef Arnaud: More and more I see people going back to the roots of Thai cuisine. When I came here seven years ago, most of the chefs were catering towards tourists, but now I’m delighted to see an increasing amount of restaurants choosing to go back to authentic flavours. That is really interesting.

MICHELIN star-decorated French chef Alain Ducasse has opened his first restaurant in Thailand just across the river from Le Normandie. Do you have any opinions on his arrival?
Chef Arnaud: Not at all. The concept isn’t fine dining, and honestly, even if it was, it’s good to have competition. The more competition we have, the greater push we have to improve, and that’s never a bad thing.

Chef Ryuki: I think more importantly it’s about the food they’ll be cooking every day, not just the name behind the restaurant. It’s about the team. With French cuisine - you cannot cook by yourself. He has a good team, that’s what counts.