To Thai students, Lawo may sound familiar from a history class (for those who have been paying attention), as one of the major kingdoms that dates back to the Dvaravati Era. Later on during the Ayutthaya Era, King Ramathibodi I (Phrachao Uthong) sent his eldest son, Phra Ramesuan to reign over the city. However, after Phra Ramesuan became king of Ayutthaya, Lop Buri lost its significance until it was later resurrected as the second capital of Siam. Under the reign of King Narai the Great, a palace - Phra Narai Ratchaniwet - was ordered to be built on the east bank of the Lop Buri River, thus putting Lop Buri at the peak of its prosperity. To date, its status as the city of King Narai the Great still stands, as an annual national festival named King Narai the Great Reign Fair is held every February as a celebration and remembrance of King Narai the Great. Getting to this historic town is not difficult, with its short distance of only 160 kilometres, a mere two-hour drive, from Bangkok. 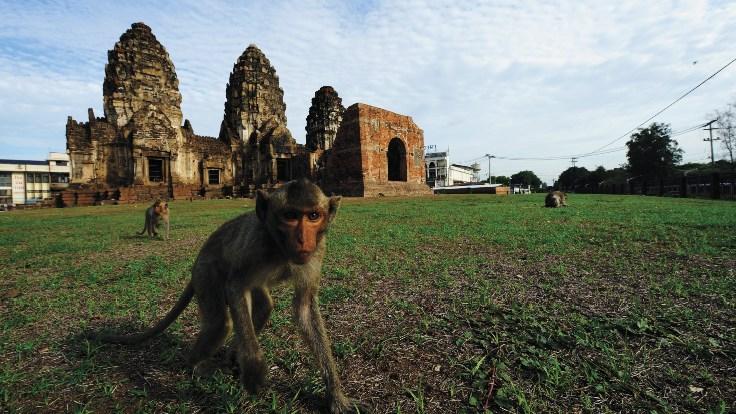 Lop Buri is the ‘Land of White Clay (Dinso Pong)’ and the ‘Land of Monkeys’, two legends that originated from the great epic of the Ramayana and one of its main characters, Hanuman. In the narrative, when Rama {Phra Ram) finally defeated Ravana (Tossakan), Rama rewarded Hanuman and made him the king of Lawo Thani. Hanuman, a monkey warrior general, brought over his troops of monkeys with him. Time passed, and the descendants of those monkeys began to fill the town, thus explaining the province’s abundance of monkeys today. Another legend has it that after defeating Ravana, Rama rewarded Hanuman by firing an arrow, and wherever the arrow landed that land would be Hanuman’s to reign. The magical arrow of Rama landed on Thung Phrommat (the current Lop Buri) and set fire to the land upon which Hanuman used his tail to put out the fire. From that day, the burnt land turned into white clay, or dinso pong. Today, dinso pong is a famous 5-star OTOP product of Lop Buri and plays a huge role in creating the province’s famous food - Khai Khem Dinso Pong, or white clay salted egg. Used to cover salted eggs helps the yolk to develop a creamy and rich, colourful yolk that is neither too oily nor salty. 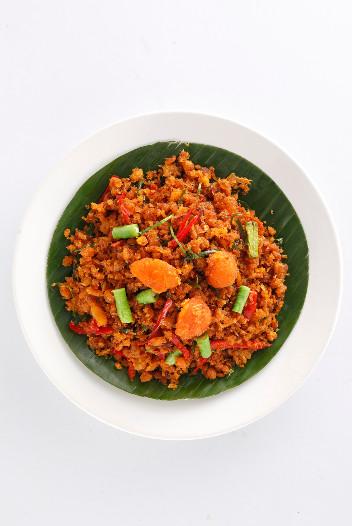 Khai Khem Dinso Pong can be used to make many scrumptious savoury dishes and desserts. For instance, the famous local offering of Khai Khem Dinso Pong Phat Phrik Lhing, or stir-fried salted egg with ginger-chilli curry paste, is not to be missed. The dish is often stir-fried with Pla Duk Fu, or crispy shredded catfish made by deep frying shredded catfish meat until golden brown before stir-frying them with phrik khing, sliced cowpea, and the protagonist- Khai Khem Dinso Pong. Add sliced kaffir leaves as a garnish before serving. This dish is the best combination of salty and sweet with a hint of spice. The creamy salted egg is perfectly balanced with the flavourful catfish meat. This dish is guaranteed to dazzle with its simple yet delicious combination of flavour and crispy texture

Currently, the province’s source of Dinso Pong comes from Muban Dinso Pong, or white clay village, where Dinso Pong production is the main source of income of every household. As the land of Muban Dinso Pong is filled with white clay, it is not fertile enough for agriculture. Thus, white clay production became the villagers’ major profession. Tourists visiting the village may also learn to make white clay. For those who are interested in making Khai Khem Dinso Pong, head to Ban Din Mot Daeng, which serves as an educational centre and museum where one can try making their own salted eggs. The centre also welcomes everyone with an interest in pottery, whether that be earthenware or clay sculptures. 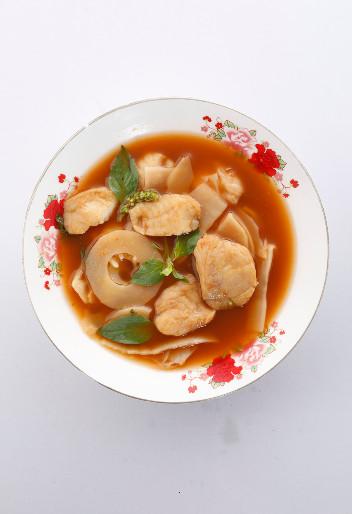 The local culinary scene of Lop Buri is inspired by many ethnicities and cultures, from Lao Puan to Mon and Thai Boeng. Migrating from the Lao People's Democratic Republic before settling down in Ban Mi district, the Lao Puan’s preservation of their culture and food has resulted in many interesting dishes, amongt which is Kaeng Som Puan, where Pla Ra or fermented fish serves as the key ingredient that distinguishes Kaeng Som Puan from any other kinds of Kaeng Som. The Lao Puan or Thai Puan has unique and charming cooking skills and dishes, and Kaeng Som Puan is one of them. The dish also features pickled bamboo shoots, which gives it a unique sour flavour. To make the most authentic Kaeng Som Puan, bamboo shoots from Khao Sam Yot is a must thanks to its sweet and crunchy meat.

Another ethnic group, Thai Boeng, originated from Nakhon Ratchasima and settled in Lawo approximately 3,000-4,000 years ago. The Thai Boeng people at Ban Khok Salung often eat freshly cooked seasonal food, which can be found locally; such as, fish and local vegetables - their dishes are cooked mostly without frying or using coconut milk. Thai Boeng cuisine is nutritious and features fresh and natural ingredients; such as, herbs, which provide numerous health benefits. 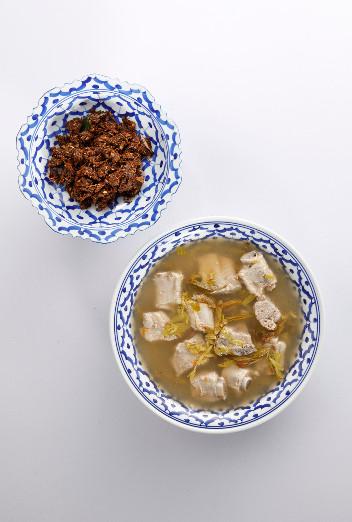 Thai Boeng locals prefer to pair almost every menu, especially Tom (boiled) and Lap menus with Khrueang Dam, a seasoning composed of dried chillies, lemongrass, kaffir lime leaves, garlic, galangal, Kam Chat or Mak Waen (from the same family as Sichuan pepper) - grounded and roasted until aromatic. Many may wonder what Kam Chat is. Simply put, it is a type of spice that carries a unique fragrance and is believed to help get rid of abnormalities caused by Khun Sai (dark magic). Kam Chat is dried and used as a spice. It is very hard to grow, and often one would have to venture deep into the forest to obtain it. The most recommended menu which features Khrueang Dam is Tom Kraduk Mu Bai Makham on Khrueang Dam or stewed pork ribs with young tamarind leaves soup.

The key to this menu’s sour taste is the young tamarind leaves with a hint of spicy and salty from the seasoning. The secret to this soup dish is how well the pork ribs are cooked. Khrueang Dam also helps to add extra depth to the soup with its unique fragrance and flavour. Other dishes cooked with Khrueang Dam can also be tried at theThai Boeng Ban Khok Salung Museum. Another attraction next to the village is Pasak Chonlasit Dam, the longest earthen dam in Thailand and a project initiated by the King Bhumibol Adulyadej the Great (Rama IX) that helps to conserve water and prevent flooding in Lop Buri. Don’t forget to visit the elevated railroad along the edge of the Dam, which gives the impression of a train running across the water’s surface. 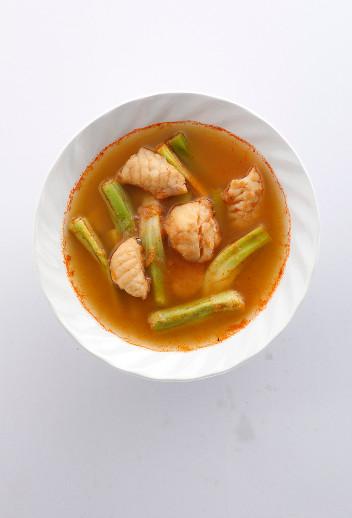 Another dish to try is a Mon-inherited menu - Kaeng Som Lai Phak Pot. The Mon village in Bang Khan Mak, the largest Mon community of the province, still picks fresh Phak Pot, or water hyacinth, in order to cook this dish. The locals would only pick water hyacinth from a reliable clean water source. The essential part of Phak Pot is the Lai, or its stem, which is then peeled and cleaned. To cook Kaeng Som Lai Phak Pot, mix Phrik Kaeng (curry paste) with minced fish into the pot. Season Phak Pot with fish sauce and tamarind paste, and the dish is ready to be enjoyed. To discover more about Mon culture and lifestyle, head to Talat Samon or Talat Mon Mueang Lawo. Here, visitors can enjoy Mon-style cuisine while shopping and watching local music and shows in a friendly environment. The market is open on every first weekend of the month, from 3 - 8 p.m. However, the best time to visit is 5 p.m. when most of the shops are already opened

Another attraction not to be missed is Phra Narai Ratchaniwet, the palace constructed under King Narai the Great’s order. After his death, Lop Buri and the palace became abandoned until King Rama IV of Rattanakosin ordered the restoration of this palace and renamed it Phra Narai Ratchaniwet. The former palace was turned into a museum during the reign of King Chulalongkorn the Great (Rama V) and serves as a good sample of the acculturation of Thai and Western architecture and city planning. 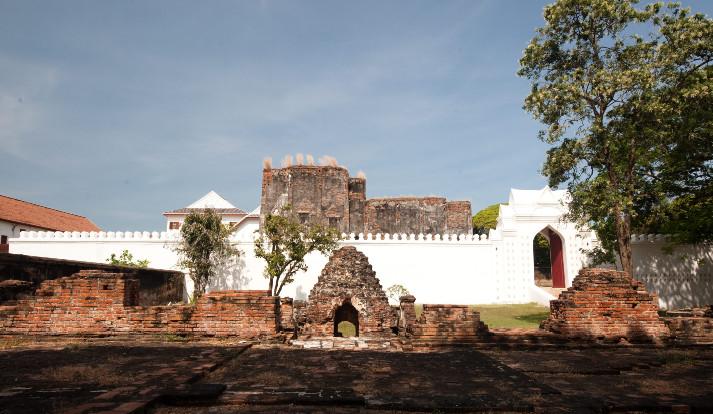 After visiting Phra Narai Ratchaniwet, head to Ban Wichayen nearby. Back in the days, the quarter formerly served as a residence for French envoys who were visiting the court of King Narai the Great in Lop Buri. It was also the former residence of Tao Thong Kip Ma and Chao Phraya Wichayen or Luang Surasakhon, with their residence located on the west of the compound. The compound within Ban Wichayen comprises 3 sections: the eastern part for the visiting French envoys, the western part that is the house of Chao Phraya Wichayen and Tao Thong Kip Ma, and the centre, which was used as a Christian church. Whether you are interested in architecture or history, Ban Wichayen is an intriguing site as its architecture was the first in Thailand and the first in the world to blend Eastern (Thai) with Western (Renaissance) design together. 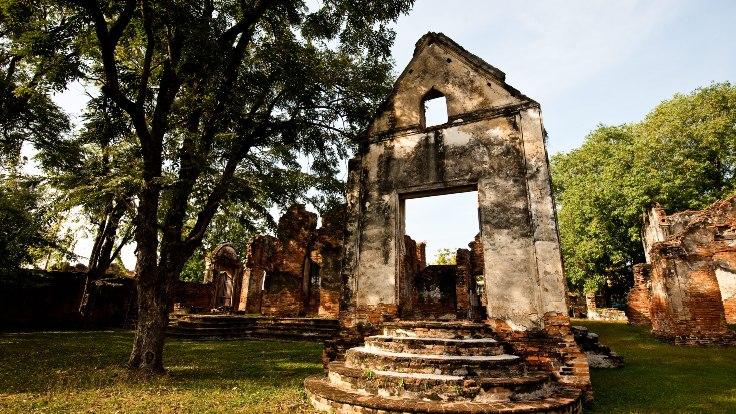 Feast your eyes on these next-level chicken creations from MICHELIN Star recipients.

No flight needed. Sate your wanderlust at these Bangkok hotels offering experiences like no other.

Miss Travelling? You Can Still See The World