Thai Durian Guide: How To Choose, Where To Buy And More

The world’s largest exporter of the thorny, pungent fruit, Thailand is the best place to try all 234 varieties of durian available.

The late Anthony Bourdain once said of the durian: “Your breath will smell as if you’ve been French kissing your dead grandmother.”

As it turns out, he was partially right. A durian lover would describe the same experience to relishing a spoonful of crème brulee. For in the same way that cheese has left a divisive trail in the West, so too has the durian been the topic of many a post-prandial debate in Asia. With the spiky and hard husk that renders it almost impossible to crack open, one might even wonder if it was meant for human consumption at all. But devotees would go out on a limb for their durian hit, some likening its taste to butterscotch, hazelnut or even chocolate. Detractors would be quick to disagree, comparing the notorious pungent odour to rotten carcass, blue cheese or even a combination of gym socks and onion. Like it or not, the durian (pronounced “turian” in Thai) is here to stay; its popularity hitting its peak as young entrepreneurs enthusiastically hatch inventive ways for consumers to enjoy them.

Durian — a Melayu term for “thorn” — is found in abundance in South-east Asia, including Malaysia, Indonesia, the Philippines and Thailand. There are countless ways this bittersweet fruit is savoured, but in the Land of Smiles, nothing beats having this fruit on the kitchen table where, like a bottle of fine Bordeaux, it’s enjoyed among a close circle of friends, paired with a warm conversation that goes on well into the night. 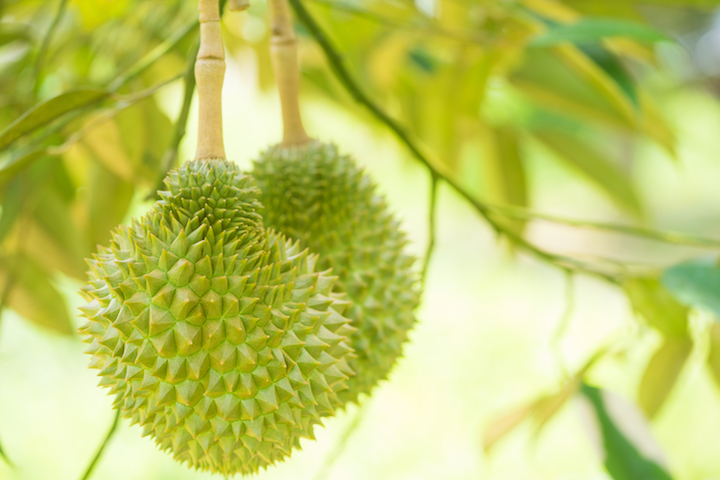 Fruit Of The Ages
As far back as 17th century, the fruit was already gaining fans among foreigners. Jacques de Bourges, one of the first missionaries to arrive in Ayutthaya (Siam’s former capital) in 1662, wrote of the durian: “The flesh is as white as snow, exceeds in delicacy of taste all our best European fruits, and none of ours can approach it.”

Simon de la Loubère, the French ambassador to the Kingdom of Siam, also wrote in 1687 how the “durion” or “tourien” is well known in the region and how he’d tasted a variety from one of the numerous orchards along the banks of the Chao Phraya River. In the 17th century, this part of Bangkok was the centre of durian cultivation. 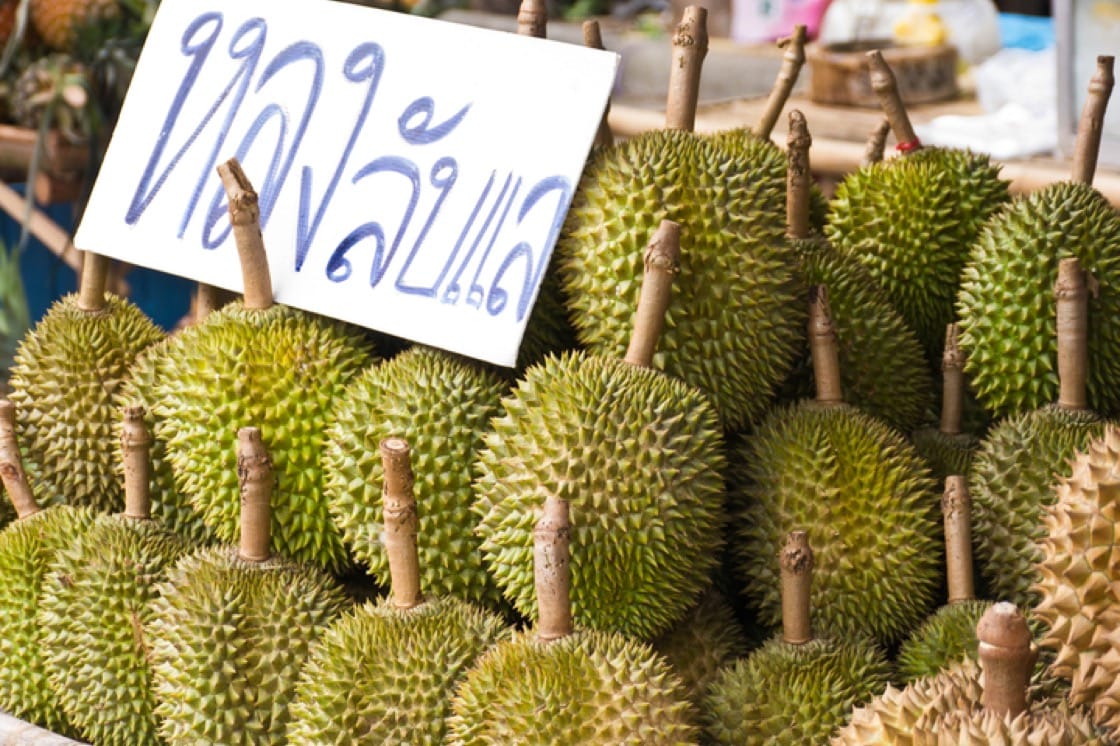 The Big Four
234. That’s how many known durian varieties there are in Thailand. It’s no wonder then that Thailandis the world’s largest exporter of these so-called “crème brulee on trees”. It would take years to taste them all, but for first-timers, start off with the big five.

Monthong literally means “golden pillow” in Thai, but this is one pillow you wouldn’t want to lay your head on. It’s the largest of the five most popular breeds in Thailand and is characterised by triangular spikes and pale yellow flesh that’s the sweetest of them all.

Gaan Yao or “long stem” durian is more rounded with smaller thorns and originates in Nonthaburi Province where the trees thrive in the lowlands by the river. It’s loved for the well-balanced flavours combining sweet and creaminess, and is the most expensive. A Gaan Yao recently fetched 270,000 Baht (US$8,400) at an auction. This variety is so favoured that it is even used as a durian bribe by ambitious Thai businessmen to sweeten deals.

The more circular Chanee variety, which means “gibbon” in Thai, is home to golden yellow segments of goodness that are less meaty than the Monthong, but definitely more fragrant and rich. Experts say the best way to choose which segment to put in your mouth is to find one that most resembles a smile.

It’s easy to guess the size of the Gradoomthong variety once you realise the name translates into Thai as “golden button”. Weighing an average of only 1kg, this variety is easy to consume, as the smaller segments aren’t as sloppy to eat as the more meaty varieties. 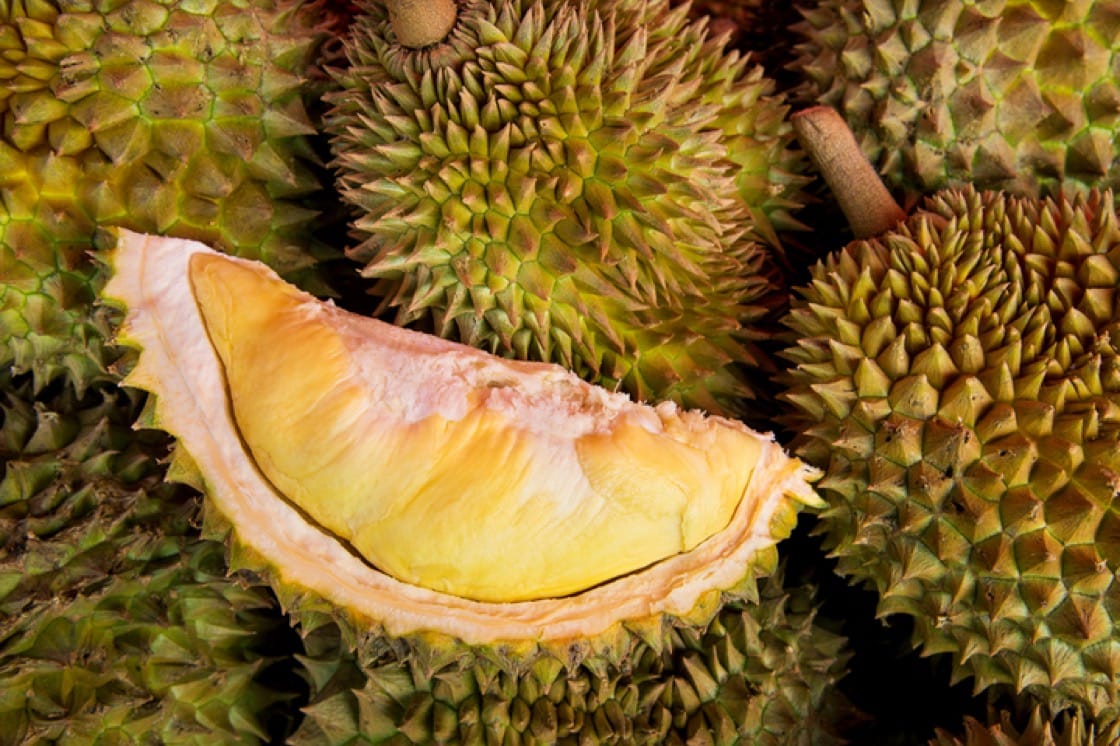 Monthong durians are the largest of the five main Thai varieties.

The Press Test
There’s no right or wrong when choosing which durian to purchase as long as you give it the press test. With permission from the vendor, place your finger on the durian and give it a gentle squeeze.

If it’s the pungent kind that rocks your socks, go for the softer segments which promise full and richer flavours. The firm ones are less intense in smell and taste, which make them more suitable for rookies. Just make sure kissing isn’t on your agenda for the day.

Durian season starts in May and tapers off around November, but orchard owners have managed to coax the fruit from trees throughout the year.

Cooking With Durian
Massamun — Thais love to cook with fruit and the durian is a favourite ingredient that adds a burst of umami to traditional dishes such as the massamun. The almond and buttery undertones of the durian add depth to the coconut milk and curry, creating what can only be described as a gastronomic orchestra on the palate. 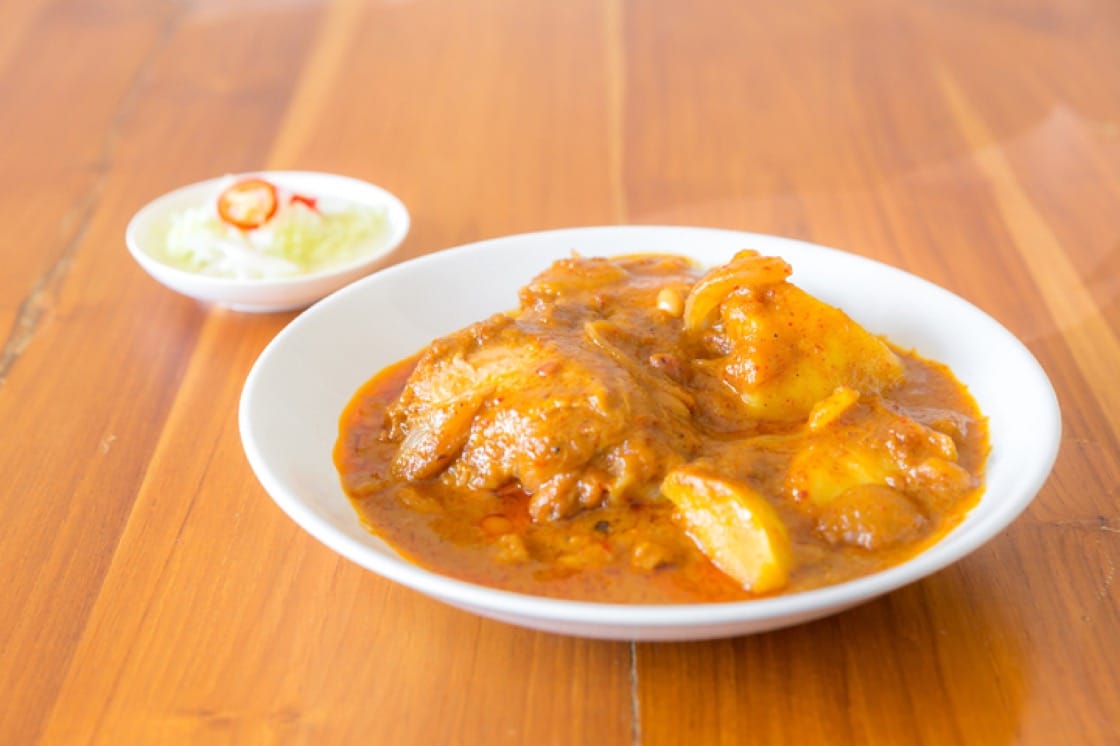 Durian chips — These thinly sliced durian chips pack a nutritional punch and are also very addictive. It’s advisable to share the packet rather than have your waistline bear the brunt of it all.

Durian coffee — What happens when you marry coffee with the world’s stinkiest fruit? A sharp caffeine hit. If the usual cup of Joe is proving to be somewhat monotonous, a durian frappe is definitely what you’ll need to turn a good day into a fantastic one.

Durian pizza — Here’s something to make the Italians recoil in horror. But fret not, the surprisingly mind-blowing combination of cheese and durian makes this topping the ultimate comfort food for durian enthusiasts.

Som tum durian — Hang on, isn’t som tum supposed to be made with papaya? Traditionally, yes, but the star of the new version of the popular Thai salad is, of course, the soft and crunchy unripe durian. If you’re a fan of som tum, you’re likely to go fruity over som tum durian.

Durian guan — Preserved durian or durian guan is popular in eastern and southern Thailand and the mouthfeel is like eating durian-flavoured sticky toothpaste. Very ripe Monthong is put into a large pan over a fire and stirred until it reaches golden-brown perfection.

Durian chuam — Thai desserts are usually heavy on sweet notes, which explains why durian chuam (slow-cooked in syrup) is quite a hit. What does it taste like? The classic French marron glacé (candied chestnuts) — but with oomph. 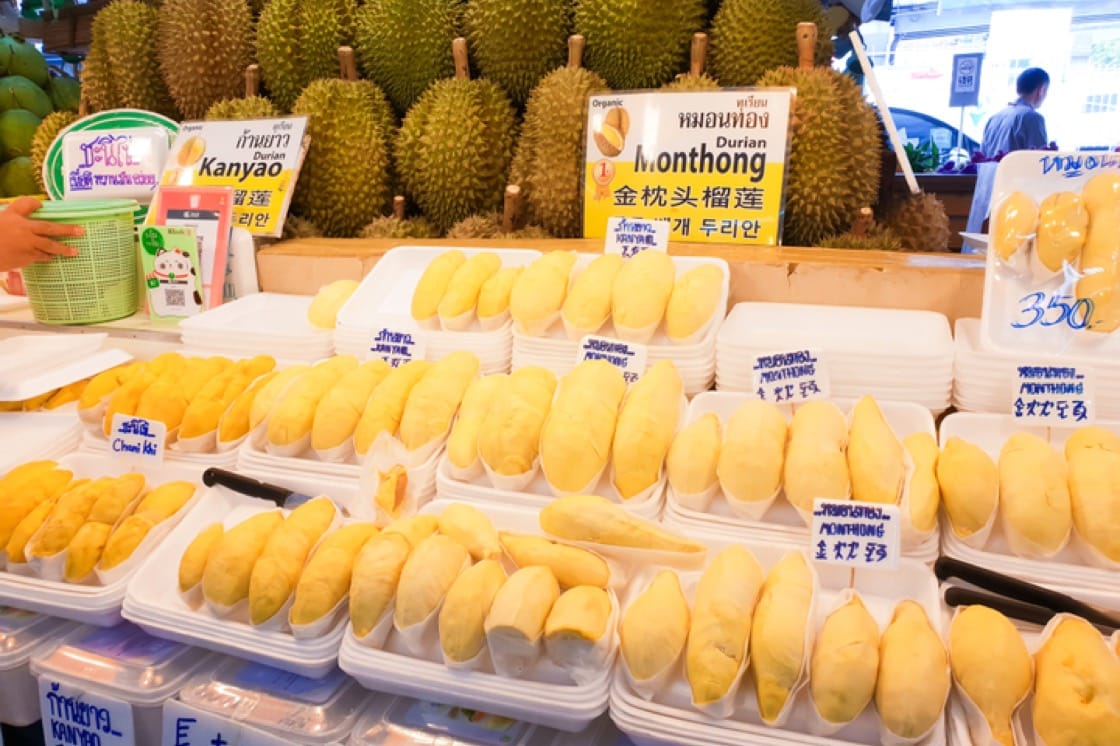 Durian packed for sale at Or Tor Kor Market.

Where To Get The Best Durian
Or Tor Kor market is Bangkok’s most high-end outdoor market favoured by the capital’s well-heeled. The finest-quality products are on offer here with lofty prices to match. But one thing is for sure — you’ll go home with the best durian money can buy.

I’m Durian Restaurant in Nonthaburi Province, just northwest of Bangkok, has nothing else on the menu except for durian. The durian-addicted owner has tasted over 100 varieties and stocks some of the rarest varieties although the ubiquitous Monthong, Chanee and Ganyao are also available.

At After You Durian, the philosophy seems to be “If it’s going to stink, might as well stink out the whole place”. This café dedicated entirely to the forbidden fruit serves desserts such as durian sticky rice honey toast, freeze-dried durian and durian frappe.

The foodies haven that is Bangkok’s Chinatown or Yaowarat is dotted with durian vendors that open until the wee hours of the night. Embark on a foodie tour and cap it off with durian for dessert. Prices are generally lower than anywhere else and bargaining is acceptable.

Dos And Don’ts
Do let the people at Thailand Durian Tour take you to the finest spots for durian. If you prefer to go hunting on your own, they can provide contacts with orchards as well as a map of their locations. 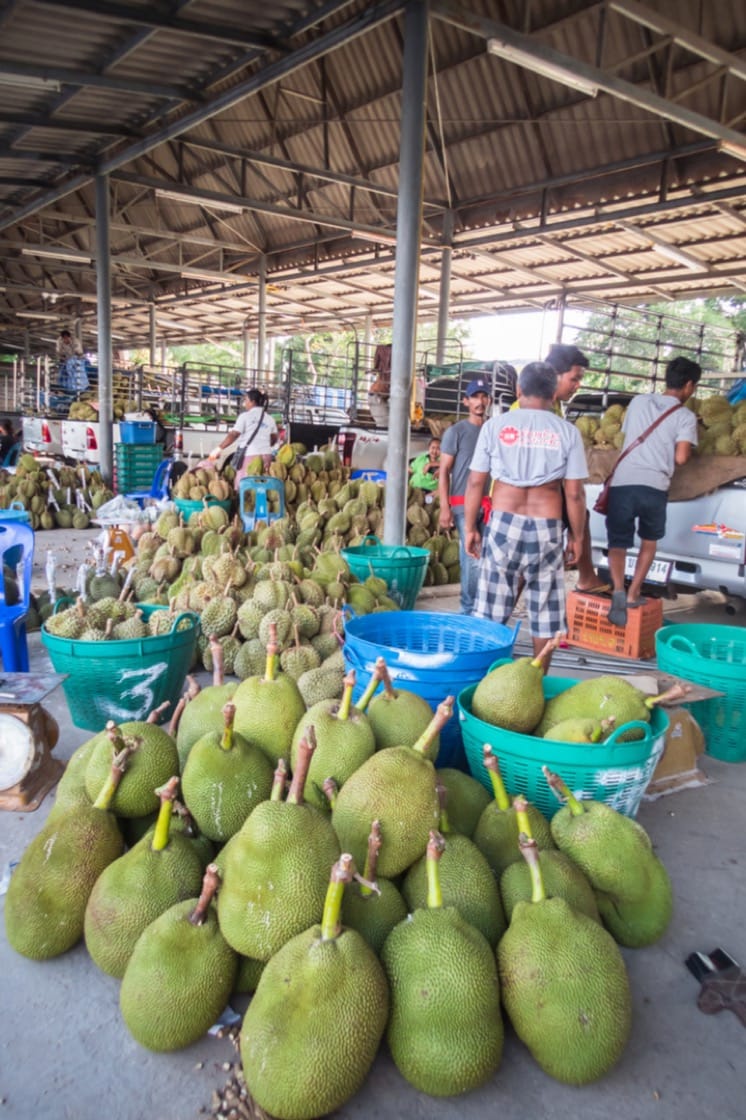 Do make plans to visit the annual Chanthaburi Fruit Festival (pictured right), usually held in May. Chanthaburi is the capital of tropical fruits and prices are usually much cheaper than in Bangkok.

Do try the durian buffet at Suan Supatra Land in Rayong Province. It’s a magical wonderland of all-you-can-eat tropical fruits, including durian all shelled and presented for you to feast on to your heart’s content.

Don’t eat too much durian while having alcohol. Death by durian is not a myth, even though there’s no scientific explanation for it. Durian heats up the body so its combination with alcohol could prove fatal. Reports of deaths from the overconsumption of durian and alcohol are all too common in Thailand, so take heed.

Don’t carry the pungent fruit in taxis, hotels and department stores, as most public facilities ban durian from their premises, probably due to its lingering smell.
Advertisement
Advertisement