Gastronomy Journey, The Series of Thailand Ep.2 The Taste of Chiang-Rai Province

Like the sun and the moon, Chiang Mai and Chiang Rai coexist in the minds of Thais like two sides of a coin - both important and with unique characteristics of its own - but also similar in spirit. Located in the northernmost part of Thailand, Chiang Rai is a province less-travelled - a quieter sibling of Chiang Mai not so unlike what Eleanor might be to Marianne Dashwood in Jane Austen’s Sense and Sensibility. Literary metaphors aside, Chiang Rai province was once the ancient Kingdom of Hiran or Ngoenyang, which later became the Kingdom of Lanna known by the Thai people today. With its rich history and demography, it is not surprising that Chiang Rai’s cuisine is both distinctive, yet shares an overlapping similarity to that of Chiang Mai. 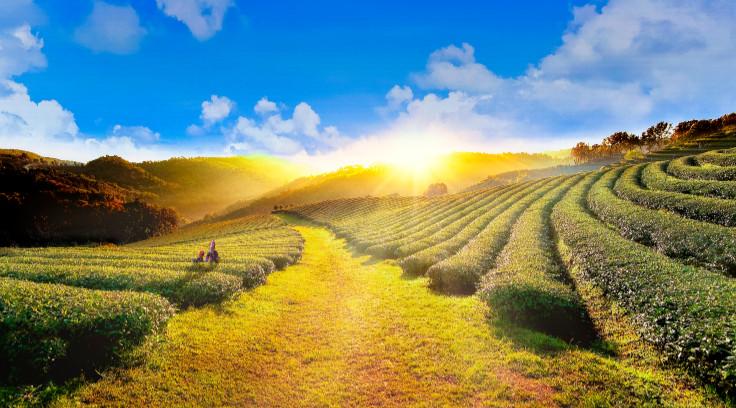 Khao Ram Fuen
Khao ram fuen or khao ram keun is originally a dish commonly eaten amongst the Thai Yai (or Tai Yai) and Tai Lue people from Sipsong Panna in Thai or Xishuangbanna in the Chinese province of Yunnan, before trickling down to become a local staple in Chiang Rai. Khao ram fuen is made from finely milled rice mixed with limewater (not to be confused with lime juice) on a fire stove until cooked. The mix is then left overnight before being cut into small white cubes called khao fuen khao. Khao ram fuen comes in three variations and colours depending on the ingredients that the rice powder is mixed with. Just as the name suggests, khao fuen khao (white khao fuen) is the classic variation using solely white rice with limewater, while khao ram fuen tua lan tao (chickpea khao ram fuen) is pale yellow in colour from the use of chickpeas. The last variation is a pale violet-hued khao fuen, which features peanuts mixed with milled rice powder and limewater.

Khao ram fuen is eaten with a sauce and soup in a similar manner to a noodle soup dish. The main ingredient of the sauce features white sufu (fermented bean curd) sauce, ginger mix and other condiments; such as, ground chilli, soy sauce, and fried garlic. The soup itself comes in two different variations - sweet and sour. A vegetarian dish that does not contain any meat, khao fuen is topped with condiments; such as, beansprouts, pickled vegetables, ground white or black sesame, as well as boiled string beans and cabbage. 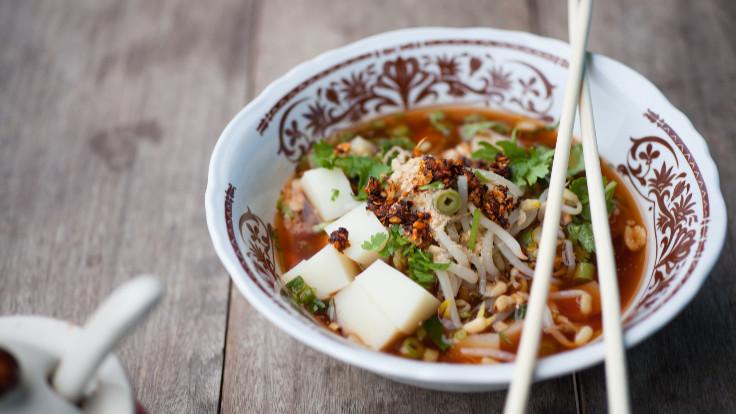 Khao Ngiao / Khao Kan Chin / Chin Som Ngiao
Another local dish that originated from the Thai Yai or Ngiao community, khao ngiao (also locally referred to as khao kan chin or chin som) is a Northern dish made in a similar way to how one would make Thai naem. Though a Thai Yai dish, khao kan chin is widely popular in Lanna. Like many other Thai dishes, the name of khao kan chin is indicative of how it is made, with the word kan, which means to knead in the Northern dialect, reflecting the process of kneading or mixing cooked rice with pig’s blood. First, the cooked rice is seasoned with garlic oil, salt and sugar before being mixed or kneaded with minced pork and pig’s blood. The pig’s blood serves as a natural food dye with only a small amount used to give khao kan chin an appetising reddish-brown hue. Some recipes include mixing lemongrass and its leaves with the blood to reduce the odour. After mixing well, the rice is portioned, wrapped with banana leaves into small parcels and cooked in a steamer. Khao kan chin is easy to make and easy to carry around, making it a perfect khao ton, or lunch, in the Northern dialect. Due to its light flavour, khao kan chin is best enjoyed with a side condiment of fried chilli, garlic, shallots, and fried garlic. 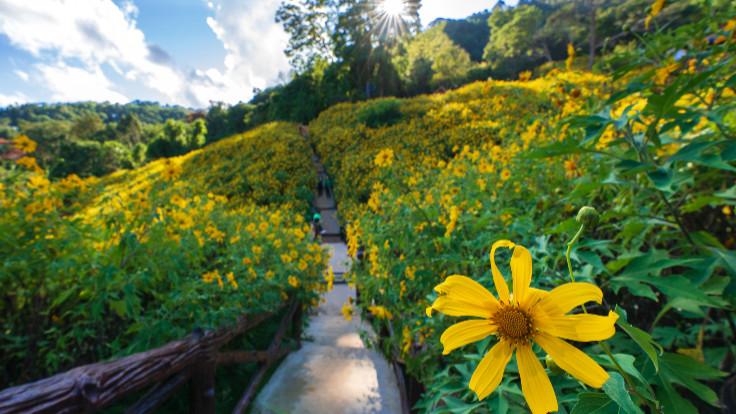 Nam Ngiao
Ranking among one of the most famous Lanna dishes, nam ngiao is a khanom chin (fermented rice noodle) dish that is widely known across Thailand. Though it shares a similar name to khao ngiao, its name is said to have derived from dok ngio (cotton-tree flower), which is eaten as a side condiment with nam ngiao. There are many places that offer nam ngiao in Chiang Rai - a sign that indicates how much of a staple the dish is to the locals - with each boasting different characteristics of their own. Some restaurants use tamarind juice to give nam ngiao its sour flavour, though some recipes recommend using grape tomatoes instead for a lighter and more vibrantly-hued broth. Regardless of the variations of this dish, an indispensable ingredient is chicken’s blood curd.

Compared to other curry dishes commonly eaten with khanom chin; such as, green curry, nam ngiao bears more of a resemblance to soup with its lighter and clearer consistency. Nam ngiao soup features boiled grape tomatoes with pork ribs, chicken’s blood curd, and dok ngiao. The soup is seasoned with salt, fish sauce, and fermented beans. While nam ngiao is commonly eaten with khanom chin noodles in other regions of Thailand, in Chiang Rai, the dish is also enjoyed with flat rice noodles. A garnish of beansprouts and a side of fermented cabbage, dried chilli and crispy pork rinds perfectly accompany the dish. 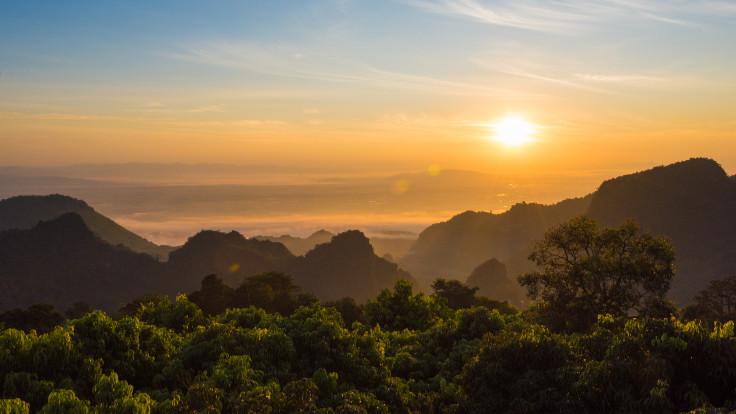 Chiang Rai’s local cuisine is a reflection of Lanna’s rich history and culture, and the dishes touched upon in this article are only a sample of what Chiang Rai has to offer - a small slice of life served through local staples and delicate flavours. From lesser-known dishes; such as, khao ram fuen and khao ngiao to the more widely popular dish of nam ngiao, those visiting Chiang Rai will be treated to the true flavours of Lanna that cannot be experienced anywhere else.

For more information, contact the Tourism Authority of Thailand (TAT), visit www.tatcontactcenter.com/en/Main, or call the TAT contact centre at 1672.

A Day In The Life of An Inspector

The Gastronomy Journey of Thailand Ep.3 - The Legendary Dishes of Tak Province