We labour under the delusion that when a new dish is invented, it is because a chef had boldly marched forth combining knowledge, creativity, experience, and intuition. And yet this is a myth. The reality is that chefs often create by accident, or because they need to. Instead of artfully crafting impeccable presentations, chefs so often do what they can with what they are given. Many chefs have found themselves missing a key ingredient, short on time, faced with sudden changes in the economics of the industry, or simply having to wing it in the rapid-fire environment of the professional kitchen. It is from that moment of panic and fear, there just might be a breakthrough.

Few chefs in the world at the moment have quite the same profile as David Chang, who started with the Momofuku Noodle Bar in New York, a long-time MICHELIN Bib Gourmand recipient, expanding to venues around the world, including the former two MICHELIN Starred Momofuku Ko. His Momofuku restaurant empire has helped define many changes to the international dining scene in the 21st century. But what is, to many, a quintessential feature of the Momofuku story is steeped in accidental discovery. Momofuku Noodle Bar was at first, by all reports, a perfectly decent neighbourhood noodle restaurant in Lower Manhattan. But after nearly going out of business, they threw caution to the wind and simply started making what the chefs themselves wanted to cook and eat and accidentally discovered that that was what New Yorkers really wanted. 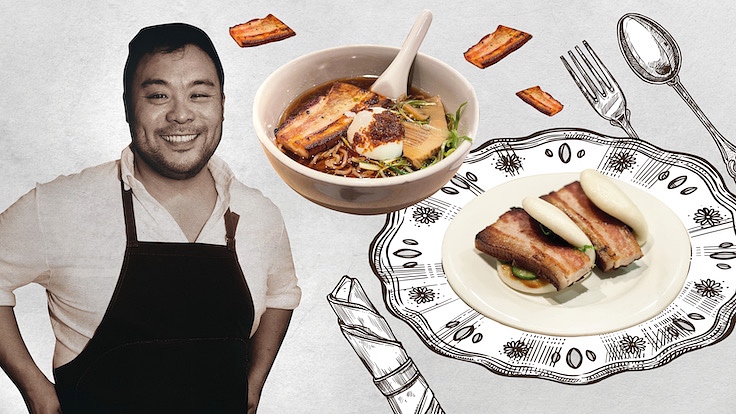 Similarly, Chang's second project revolved around a Korean burrito concept that no one was asking for and few wanted. As he said, "I was Ahab, and the burrito was my white whale." Despondent, he noted that "Noodle Bar's success was an anomaly, a happy pileup of accidents that somehow morphed into something that people really seemed to like. That kind of organic conversion is hard to replicate." So, with the same fly-by-the-seat-of-your-pants approach, he began offering a late night menu with little to no planning, freely improvising, serving up dishes as classical as a veal-head terrine and as lowbrow American as a corn dog. Once again, through sheer chance, he found a successful formula. He put it succinctly, "I don't think it could have happened if we had been more successful at the get-go. The way we operate now is because of all that ridiculous shit we went through on the way."

That is somewhat the economic side of the accident. But what of an actual accident, a true mistake in the kitchen that turns into a new creation? It might be useful to categorise these food accidents, whether by the humble diner owner or by some of the world's most renowned chefs.

A caveat: these incidents make some of the best stories. In fact, they make such good stories that we may never know what was truly an "accident”, and what was actually intentional, because the story of turning one's mistake into a stroke of genius is pretty compelling. However, for the purposes of this article, it might be best to invoke "suspension of disbelief", which is what we all do when we enjoy a film or TV show. As a story unfolds, we allow ourselves to believe it is real. So, while the veracity of these stories may be lost to the sands of time, a good story remains a good story. 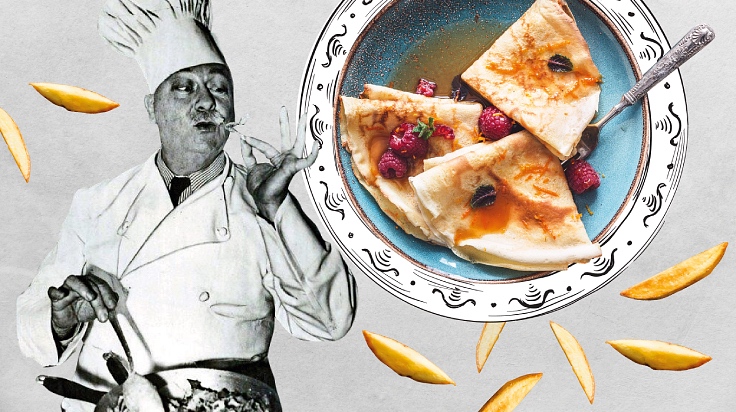 One of the most common stories is of a new technique created from a kitchen mistake. Often they involve a young or inept staff member who screws up an order at just the wrong, or perhaps right, moment, such as with the invention of crêpes suzettes. As the story goes, crêpes were to be served with various liqueurs to the Prince of Wales at the Casino de Monte Carlo in Monaco, only for the dish's 14-year-old accidental inventor, Henri Charpentier, to allow the errant flame of a chafing dish to light the crepes on fire. But Charpentier's horror turned to delight when he found that the flames had transformed the liqueurs into a caramelised wonder, and the Prince of Wales agreed.

Even more experienced chefs are also prone to happy accidents, including Monica Flin of the El Charro Cafe in Tucson, Arizona, who, in 1922, dropped a burrito into the deep fryer at her popular Mexican restaurant. Normally, she'd scream the Spanish obscenity chingada, but with customers and young relatives around, she twisted it into chimichanga at the last moment, and thus an iconic Mexican-American dish was born.

For that matter, even some of the world's most renowned chefs are prone to mistakes like these. It was Jean-Louis Françoise-Collinet, also famed as the inventor of sauce béarnaise, who had to deal with a delegation of notables arriving late at a restaurant in Yvelines, France in 1837 by half-frying his pommes frites first, and finishing them, cooled down, with a second fry later. Much to his shock, a number of the potatoes puffed up, and the result was pommes soufflées, one of the most elegant potato preparations in the French kitchen. 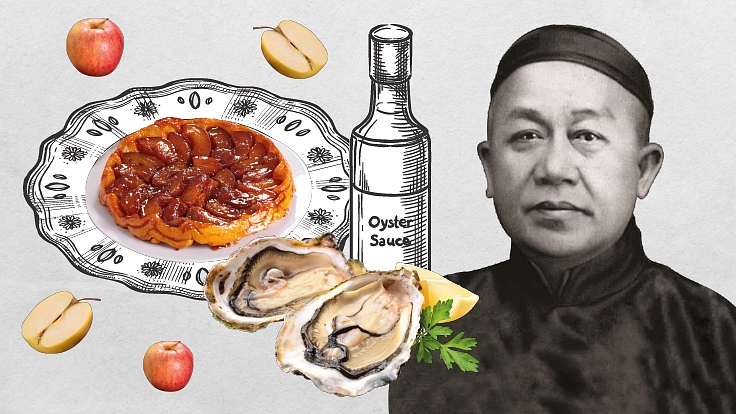 Then there are the cases of overcooking -- perhaps the most common accidental technique. Where would Chinese food be without oyster sauce? Well, there was no oyster sauce until 1888, when Lee Kum Sheung forgot about a pot of stewing oysters in Guangdong, only to discover a divine, umami-rich liquid. Similarly, on the other side of the world around the same time, Caroline and Stephanie Tatin, owners of the Hotel Tatin in the French town of Lamotte-Beuvron, accidentally left apple pie filling on the stove too long and salvaged it by covering it quickly with a pastry crust. The dessert was a hit, and their name would forever live on in this dish, tarte tatin, a bistro staple.

However, sometimes chefs know exactly what they are doing -- but something is missing. Consider beurre blanc, the lusciously silky classic French sauce. It was supposedly invented by Clémence Lefeuvre in the town of Saint-Julien-de-Concelles in the Loire Valley when she forgot to add egg yolks and herbs to sauce bearnaise, thus producing a rich, buttery emulsion of wine, vinegar, shallots, and plenty of butter. She became a legend in her own time, and the birthplace of beurre blanc, Restaurant Clémence, is still open, and is also a MICHELIN-Selected restaurant.

RELEVANT: What Is Curry?: An Exploration 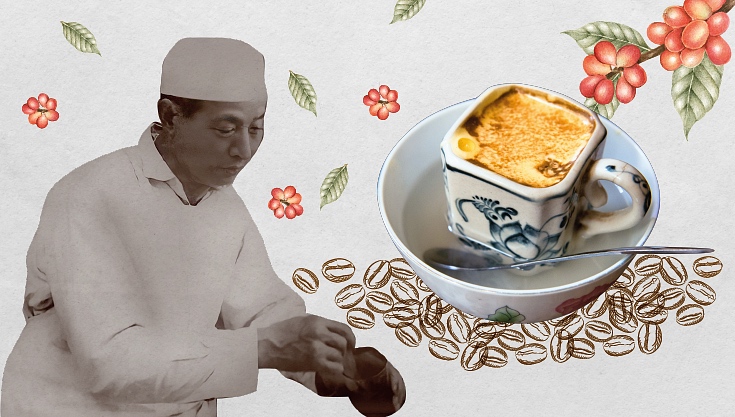 Other times substitutions are inspiration. In Buffalo, New York, in the 1960s, the Anchor Bar supposedly received a shipment of chicken wings -- at that time practically given away as a throwaway cut. However, fried and served with hot sauce, they became a hit, and the city's name would forever be associated with buffalo wings, beloved in sports bars across America. Sometimes, however, the conditions are more dire. At the Hotel Metropole in Hanoi in 1946, wartime dairy rations meant that cafe au lait was no longer a possibility, but they did have more than enough eggs. So, Nguyen Van Giang, a restaurant employee, simply substituted in some egg for milk, creating ca phe trung, a beloved Vietnamese treat with a thick, eggnog-like texture and a tiramisu flavour profile, and the Hotel Metropole's coffee shop is called Cafe Giang to this day in his honour.

Finally, there are the frantic mad dashes, when an unexpected guest demands food now, and necessity begets culinary genius. One of the best-known stories of this type is that of mole poblano, a rich sauce from Central Mexico. While indigenous peoples there have been making complex 20- and 30-ingredient sauces, now known as moles, since before European contact, mole poblano is the representative example, especially outside Mexico, partly because a savoury sauce containing chocolate is a novelty. It was supposedly invented at a convent in Puebla when the archbishop showed up and they threw everything in the kitchen into a sauce to make an old turkey palatable. 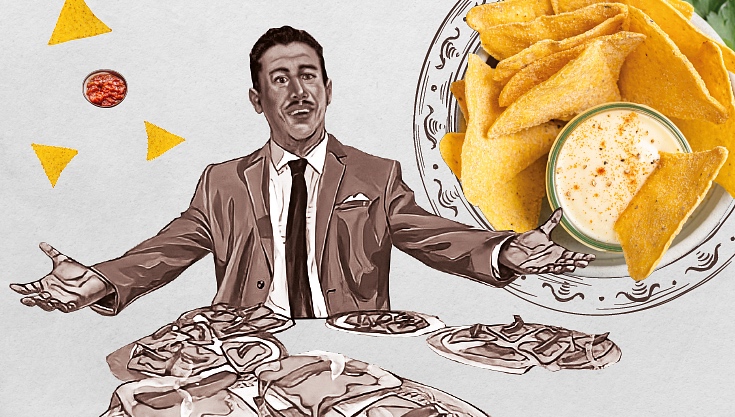 Two other legendary examples also come from Latin America, and involve cultural adaptations for less adventurous palates. In Santiago, Cuba, the American engineer Jennings Cox had guests to impress, but they were used to gin, and he was out. All he had was rum, and while Cuban rum is justly famous nowadays, it was considered a low-class peasant drink at the time, but mixed with a little lime and sugar, it was more than enough to please his bosses. And that is how we got the Daiquiri. Then, in the 1940s, in the Mexican border town of Piedras Negras, a group of ladies came across from neighbouring Eagle Pass, Texas, and dropped in at the Victory Club restaurant, where Ignacio Anaya scrambled to prepare them a dish of tortilla chips and cheese. The diminutive of "Ignacio" in Spanish is "Nacho", and within a few decades, nachos would be an iconic Mexican-American dish.

What all these stories tell us is that intention is often less important than the practical reality of trying to give people a good meal. Sometimes inspiration doesn't show up like a glimmer of light in the distance. Sometimes it drops on you. Like a chimichanga.


RELEVANT: The Culinary Past, Present, And Future As Seen Through MICHELIN-listed Restaurants