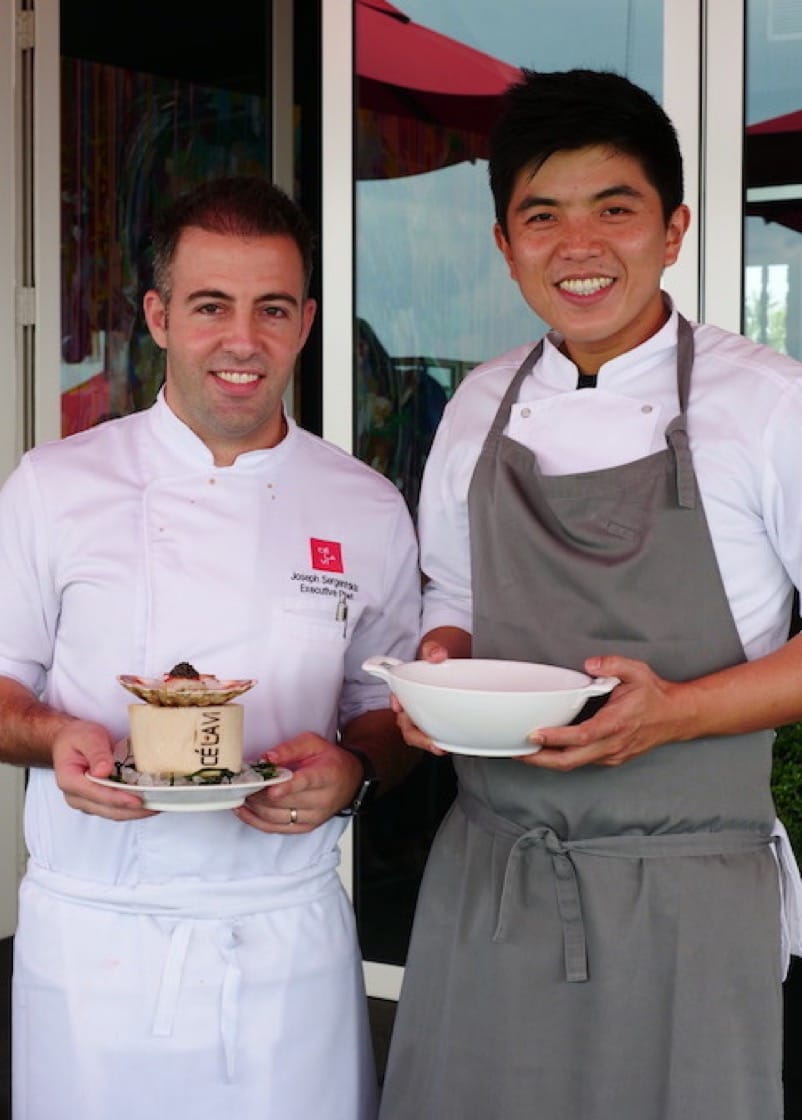 Trained at the renowned Culinary Institute of America and having cut his teeth at celebrated restaurants like Eleven Madison Park, The Modern and Jean Georges in New York, he brings a contemporary flair to Thai cuisine at Le Du, with an emphasis on traditional flavours and local, seasonal ingredients.

He was in Singapore last month where he cooked at CE LA VI high atop Marina Bay Sands with executive chef Joey Sergentakis for a series of four-hands dinners, a lively duet of playful modern Asian dishes. At a masterclass prior to the events, he showcased some of the unusual ingredients he had flown over from Thailand to use in his modern Thai dishes.
Ant Larvae
It may make your skin crawl a little to look at them, but this is an ingredient that features in Le Du’s menu every year during the rainy months of June to August when they are in season. Foraged wild in the forests of north-east Thailand, ant larvae or ant eggs are a delicacy in Isan cuisine, where it is tossed in a spicy salad, cooked in soup or added to omelettes. The larvae of the weaver ants are high in protein and contain acetic acid so they taste almost like a squirt of lime, fatty and sweet at the same time.
Advertisement
Advertisement 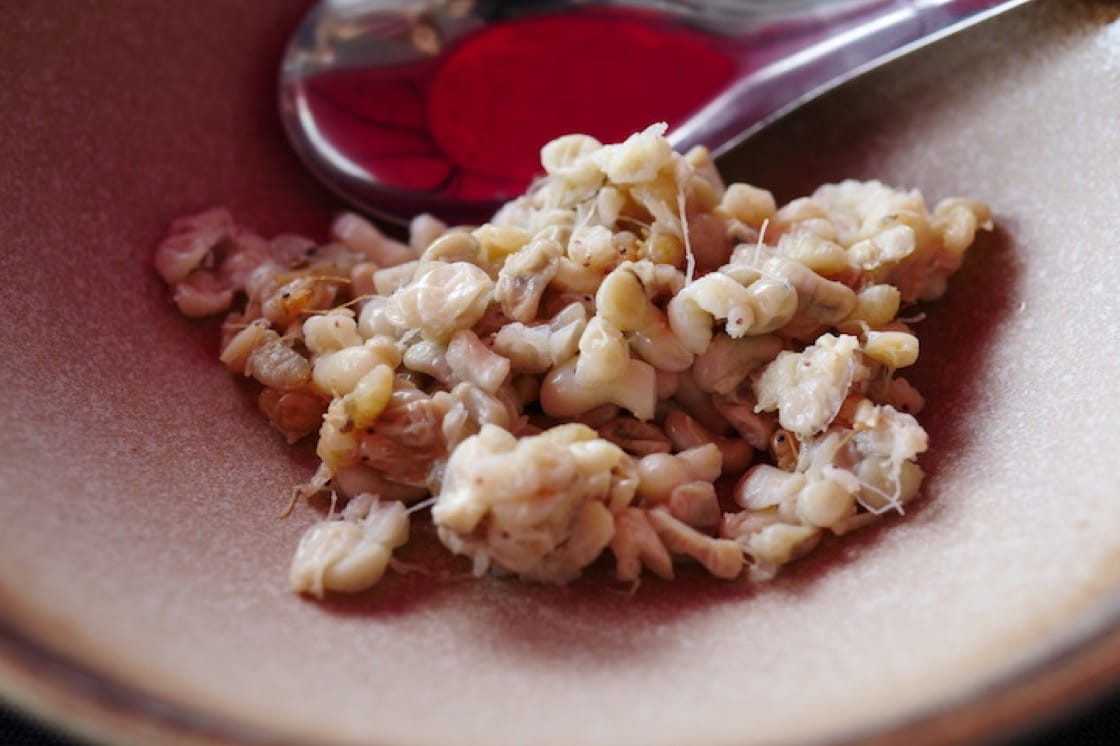 Raw ant larvae is a delicacy in Southern Thailand. (Pic: MICHELIN Guide Digital)
“Ant larvae is considered a delicacy,” says the chef. “It can cost about three times of regular meat like chicken or pork.” For his dish, he prepared the ants two ways — raw, so that each grain burst in the mouth like a slightly citrusy cooked bean, and deep-fried to a crisp texture like popped rice. These he combined with rice and a well of southern Thai crab curry, garnished with edible flowers. “So it looks like an ant nest on a forest floor,” he laughs. 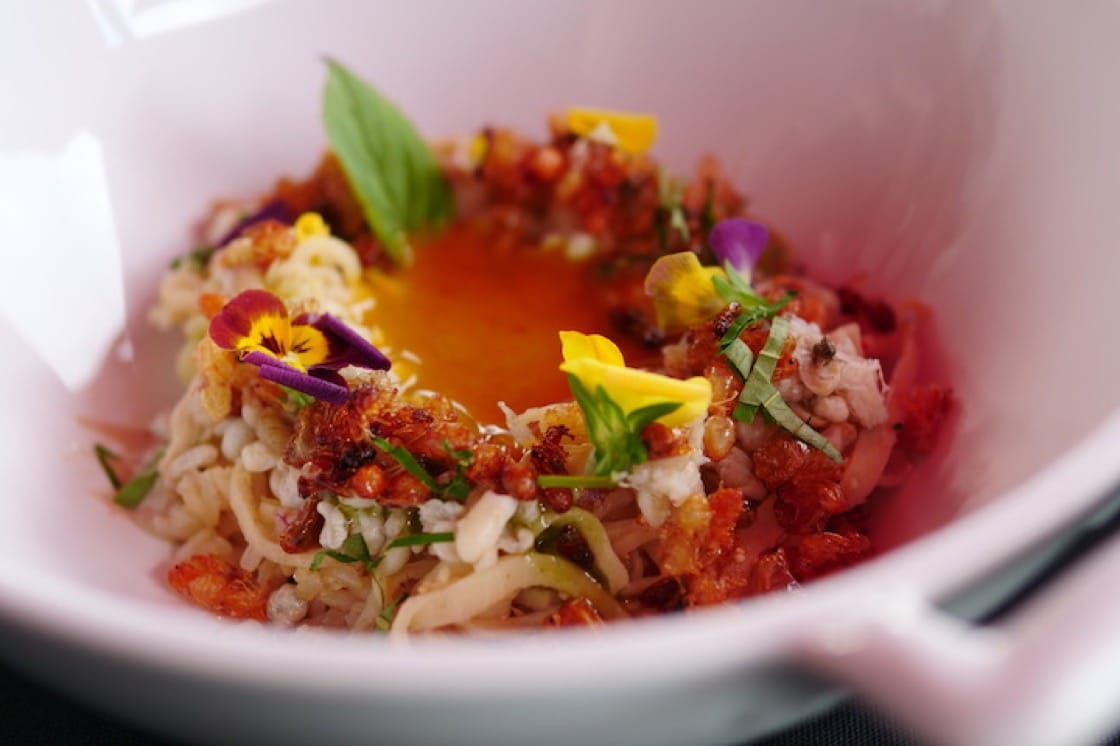 Seasonal ant larvae and bamboo shoots feature in this Southern Thai crab curry. (Pic: MICHELIN Guide Digital)
Thai Bamboo Shoots
Seasonal young bamboo shoots also feature in the chef’s dish of ant larvae and crab curry. Bamboo shoots are young bamboo plants that are harvested early so that the flesh beneath the black outer layer of leaves is still white and tender. Fresh bamboo shoots, called no mai in Thai, are usually used in stir-fry dishes, soups, salads and curries, and are only available fresh during the monsoon season of May to October — at other times of the year, they are pickled and preserved in cans and jars. 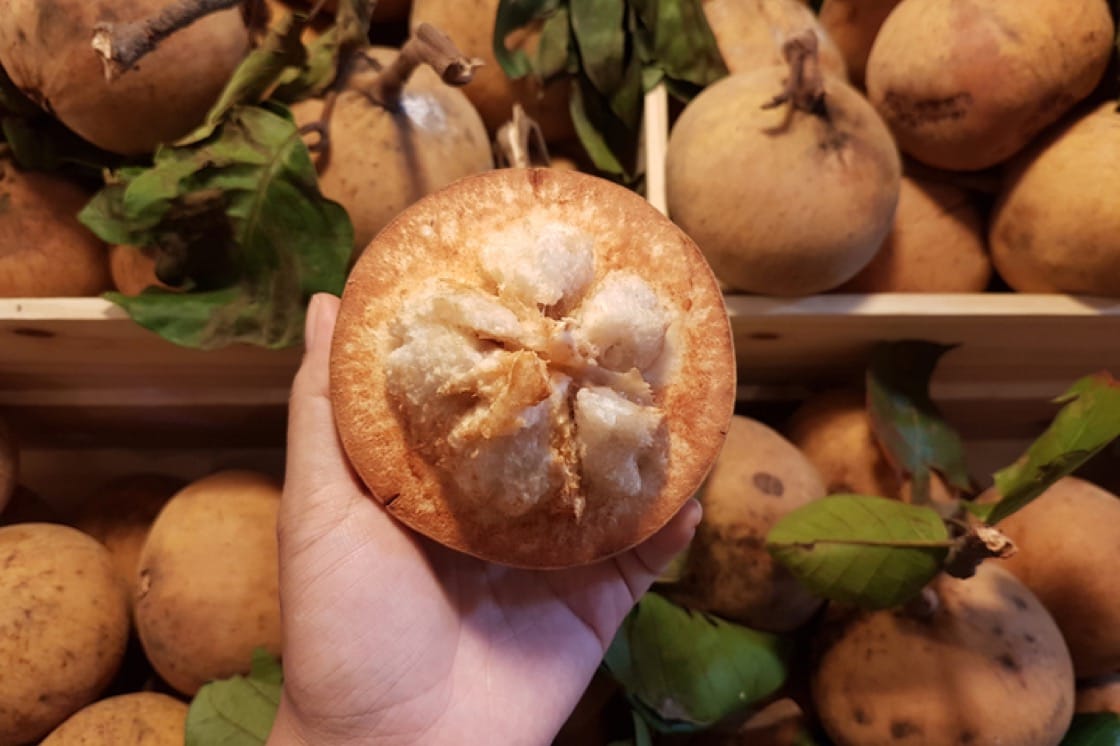 Santol is a tropical fruit that looks similar to mangosteen (Pic: Shutterstock)
Santol (Wild Mangosteen)
This yellow-skinned fleshy fruit is called kraton in Thailand, but is more commonly known in the South-east Asian region as santol. In English, it is referred to as wild mangosteen or cottonfruit, the thick yellow skin splitting open to reveal cottony white pulp in seed segments like mangosteen. 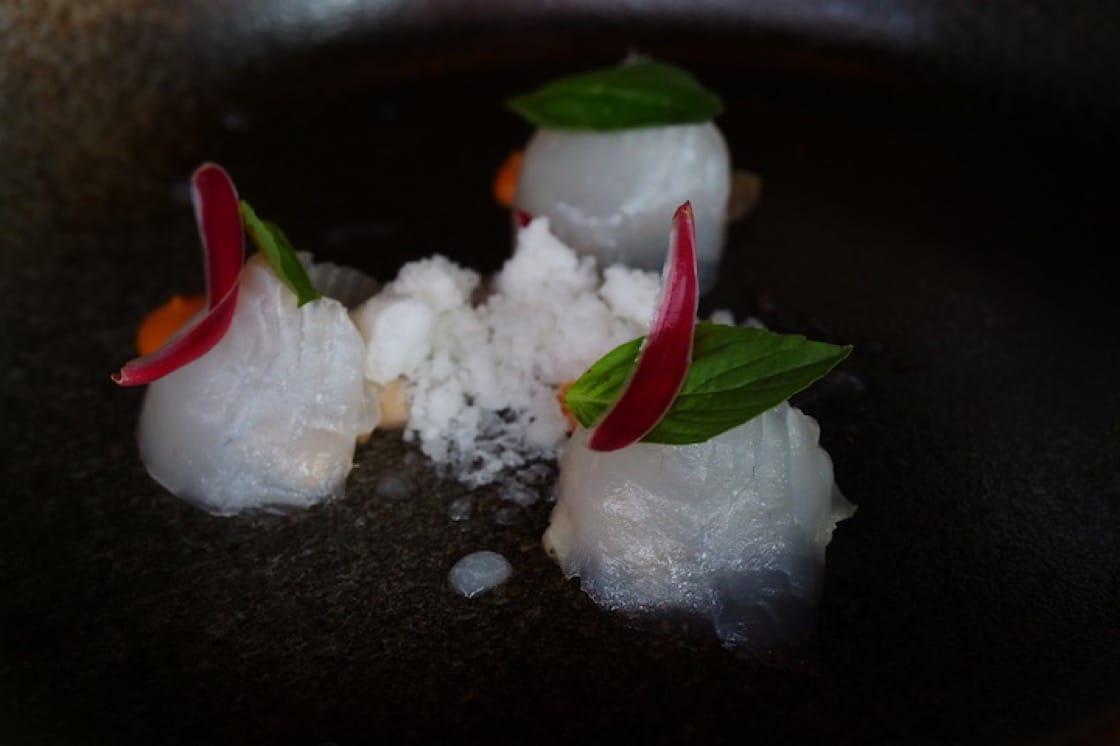 Santol or wild mangosteen is used in this starter of cured fluke and chilli with cilantro snow. (Pic: MICHELIN Guide Digital)
Fragrant and sweet, santol comes into season in the hot summer months where it is often macerated in syrup and eaten with shaved ice. Ton plays on this idea, using santol in a cold starter instead of dessert. Infusing the fruit into an ice cream, he serves it with slices of cured fluke and chilli with a scattering of cilantro snow. 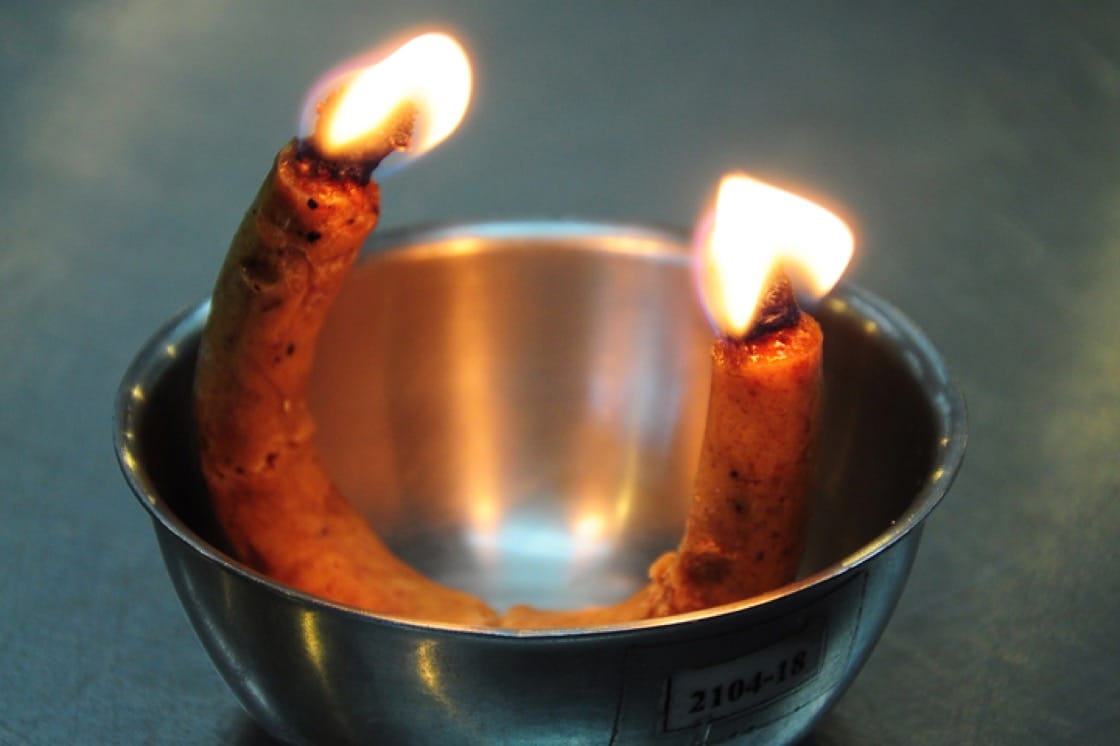 Tian op candles are used to smoke sweets in Thailand. (Pic: Shutterstock)
Tian Op (Thai Dessert Candle)
These horseshoe-shaped incense sticks are traditionally used for perfuming food in Thailand. Among the ingredients are frankincense, ylang-ylang and patchouli, so foods smoked with tian op candles are imbued with the musky scent of warm honey, wood and spiced fruit. Thai cooks light both ends of the beeswax-coated wick and let the smoke perfume sweets like kleeb lamduan cookies, coconut syrup and salim, mung bean flour noodles. For dessert, Ton smokes coconut milk with tian op and serves it with a custardy panna cotta flavoured with durian — specifically, Thailand’s most popular variety, the Monthong durian. 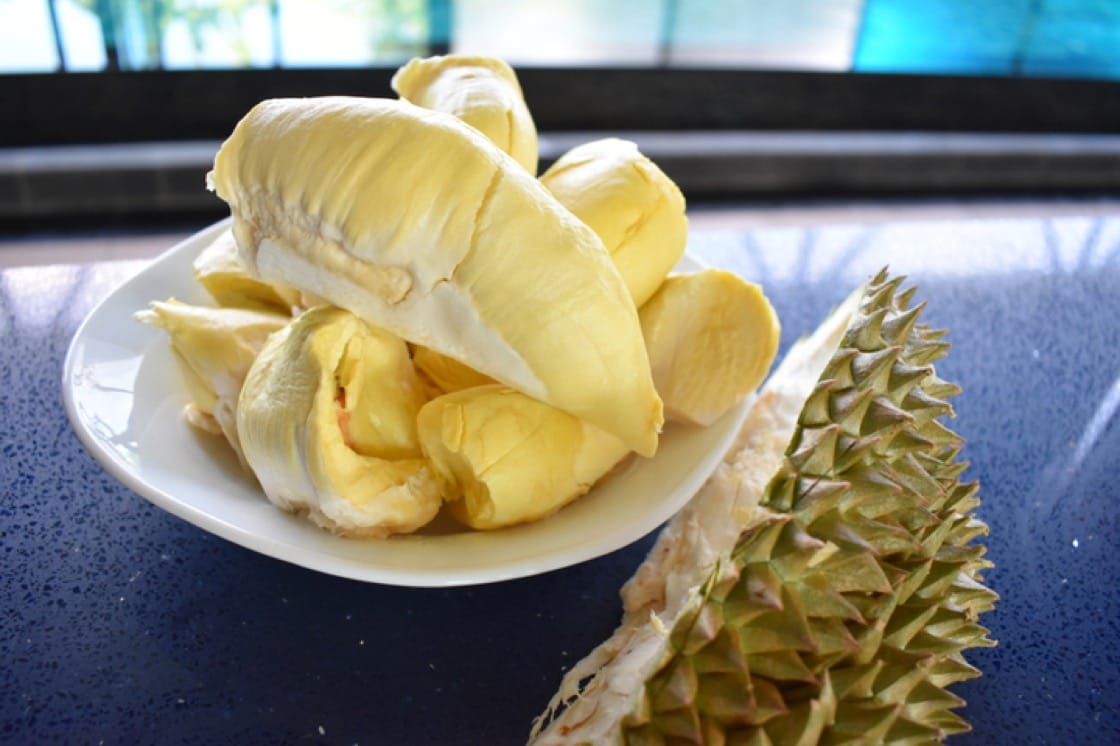 Monthong durians are the largest of the five main Thai varieties. (Pic: Shutterstock)
Thai Monthong Durian
Thailand is the world’s largest exporter of durian and is home to 234 varieties of this thorny, pungent fruit. Durian season in Thailand is typically from April to August, though you can find durian in Bangkok all year round. Monthong translates to “golden pillow” in Thai and is the largest of the four most popular breeds of durian in Thailand (the others being Chanee, Gaan Yao and Gradoomthong) and its most famous exported variety. Appearance-wise, it is characterised by fat triangular spikes and pale-yellow flesh that is creamy rich and very sweet.
RELATED: Spotlight: 5 Must-Know Dishes In Southern Thai Cuisine
Advertisement
Advertisement