Situated inside the Flower Dome, Marguerite makes for a back-to-nature moment, and chef Michael Wilson is praised by the MICHELIN inspectors for the touch of class he adds to the dining experience. Marguerite was also recognised with One MICHELIN Star this year, and the restaurant boasts a tasting menu with gracefully presented courses that are underpinned by solid techniques, packed with oomph and flavours bold enough to match the showy, colourful blooms.

How would you describe the cuisine at Marguerite to a first-time diner?
We don't complicate it. We just define the cuisine at Marguerite as contemporary, inspired by nature. We follow the European seasons, yet we don't technically use any geographical boundaries. The food is also shaped by my experiences through life — the knowledge and the tips I picked up along the way that moulded me into the chef I am today. I believe that when you're trying to express yourself — whether it's on a plate, or in a dining room, or in the form of a restaurant — your experiences are going to be what come through.

Why did you name your restaurant Marguerite?
We wanted to stick with something botanical, and we went through a process of what could potentially fit the restaurant really well. Marguerite — it's a French word for a specific daisy, similar to the family of sunflowers. I just felt like they were very happy and welcoming flowers. And then back home [in Melbourne], there were also fields of marguerites around where I lived, but of course, we called them daisies. But I don't think that "Daisy" would have been a good name for the restaurant. So, Marguerite it is.

How do you find Singapore so far compared to Melbourne and Shanghai, where you were chef de cuisine of one-MICHELIN-Starred Phénix?
People here are hungry. It's amazing how big the market is because Singapore is no big town, the way Shanghai is, geographically. But the market in Singapore, in my opinion, of restaurants of this calibre, is far, far bigger in this city.

Who is your biggest influence when it comes to food?
When I used to work at a restaurant in Melbourne called Cutler & Co, the chef de cuisine there, John Paul Twomey — working with this guy changed me for the better. He taught me a different way of thinking, which I believe set me up for the future. He always told me, "think about what you're doing." Now, we say this all the time to people, but if you really think about what you were doing and why you were doing it, you will get profound results. 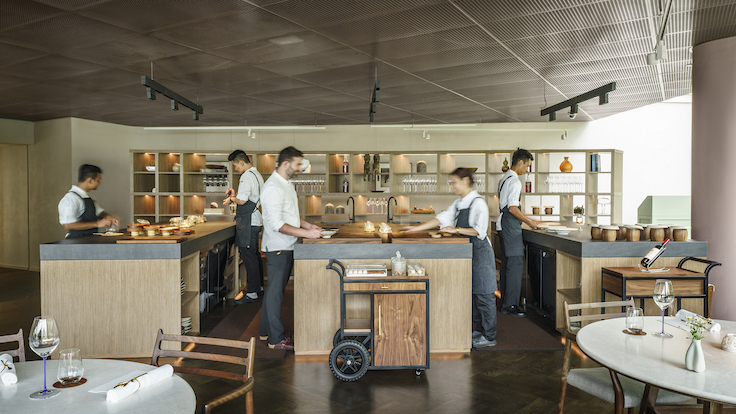 Tell us about your first encounter with the MICHELIN Guide?
We don't have the MICHELIN Guide in Australia, but I'd been to a couple of MICHELIN-Starred restaurants in London and Western Europe. What I discovered was that MICHELIN restaurants are on a whole different level — the investments, the techniques, the produce — it's kind of like stepping into a mecca.

My first real interaction with the MICHELIN Guide was in 2017, when the inaugural MICHELIN Guide in Shanghai was released. I received messages from various folks, telling me the restaurant whose kitchen I was heading that time, Phénix, received a MICHELIN Star. All I replied was, "that's good!", but in reality, I cried buckets. I was in tears. I went to my office and cried behind closed doors. It was big achievement, and it wasn't something that I expected. But it was a great recognition, and it really kickstarted my career. I believe I was about 30 or 31 at the time.

How did you feel when you found out Marguerite received a MICHELIN Star?
In all honesty, I was relieved.

Why so?
More because of the business aspect. I also know that I cook better now because of my experiences. The food and the dining experience [at Marguerite] are more focused. Everything is sharper. I know it's not easy for a restaurant to get a MICHELIN Star in its first year, but that [getting a MICHELIN Star] was our goal, and it was a big deal for us because we knew the recognition would accelerate the business because we're not exactly smack in the middle of the city.

How did you celebrate with your team?
Because everyone has been falling sick, and we've been so busy lately, we haven't done it yet. But we're renting a yacht soon, and we're going to go party on that yacht.

Is there anyone you would like to dedicate this recognition to?
The staff — the whole team. It's all for them. 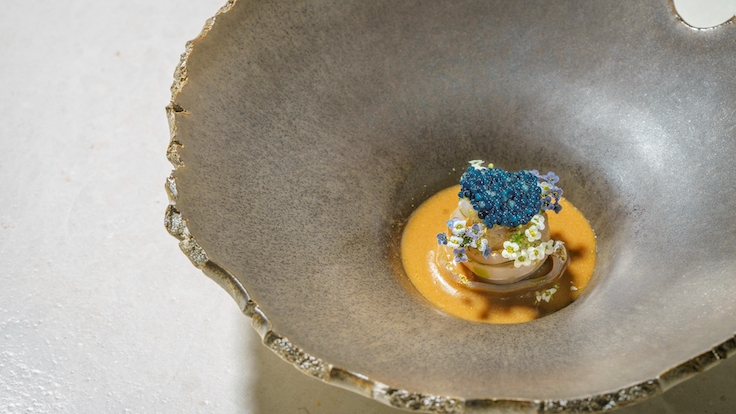 What's your leadership style in the kitchen?
I was having this discussion with my father in law, he's retired now, but he was very well-known in the business industry. He has this theory called "leading from the back" or "leading from the front". It's all about empowering people, and this resonated very well with me because it's kind of like what I do as well — you let people make mistakes, let them fail, and let them see for themselves what can happen. You can get things wrong, and you learn from getting them wrong — actually, you learn the most from getting things wrong. So take that experience with you.

You don't want to set people up for failure. Everyone must have an attainable goal. But you have to guide people and help them grow, get better at their craft, and reach their goal, eventually.

Any words of advice for other chefs or aspiring chefs?
Find a good business partner, is one. Next is be ready. They say that you'll never be ready for the next thing, right? But don't go out of culinary school and open your own restaurant immediately — learn on someone else's money. If I didn't do Phénix first, I'd have a lot of trouble doing what I do now. Work hard and be nice to people — I cannot emphasise this enough. Be humble, be kind, and be firm. Hey, we all have standards, but always remember to be kind. Don't belittle anyone; instead, educate.

What motivates you and makes you get up every morning?
I'd be lying if I said I didn't want more MICHELIN Stars. I absolutely want more, and I'm certainly doing everything within my capabilities to go after them. With recognition comes business. With business comes the ability to have a more secure life. The better that we do here at Marguerite, the more opportunities become available to my team and others in the coming years.

What are your most grateful for?
I'm totally grateful for the people who took a chance on me, especially the ones in Shanghai. I was 27 years old then, and they left me to run a multimillion dollar operation inside a hotel. If I look back at that, I can't believe they hired me for Phénix. Of course, I'm also very grateful to my current business partners for giving me this opportunity at Marguerite as well. I'm grateful for my family, my wife, and I'm grateful to be healthy.

What's next for Michael Wilson?
What we have planned for now is to refine our concepts and make them better — from the food, to the service, to the environment, to the wine list. Everything is under scrutiny, which is something that we do every end-of-the-month. We sit down, we scrutinise, and we ask ourselves how to make things better. You've got to be hard on yourself if you want to be successful.