When the MICHELIN Guide Kyoto Osaka + Tottori 2019 was released in early October last year, Japanese chef Yusuke Takada was as much relieved as he was elated that his restaurant La Cime retained its two MICHELIN stars. “I had been really nervous. Getting two stars again was a great relief,” he confessed in an interview in Taipei a week after the announcement.

Chef Takada, 41, was born in Amami Oshima, a balmy, sub-tropical island in southern Japan. He made up his mind to become a chef at an early age, after being particularly inspired by  the elaborate presentation of dishes on a cooking show. As his family ran an electrical appliance shop, Takada watched a lot of television as a child, he recalls, and one of his favourite programmes was a cooking show produced by the Tsuji Culinary Institute Group. His culinary ambitions were cemented when he was in the ninth grade, when the Japanese hit series Iron Chef was launched.

As there were no French restaurants in the rural area where he lived, the chefs who prepared French cuisine on TV looked especially enthralling. “I only discovered what a chef’s work was really like when I started being one,” Takada says, laughing. “It is a job in which the hardships far outweigh the cool moments — in the ratio of 99 to 1.”

After graduating from culinary school and working in Japan for 10 years, he headed for France to hone his cooking skills, despite not speaking a word of French. Yet, he received the opportunity to work in three-MICHELIN-starred Le Meurice, at that time still led by the illustrious French chef, Yannick Alléno. The stint impacted him tremendously.

“It was the most popular restaurant in France. Just knowing I could work there made me very excited,” he said, recalling the level of craftsmanship and attention the restaurant dedicated to every dish. 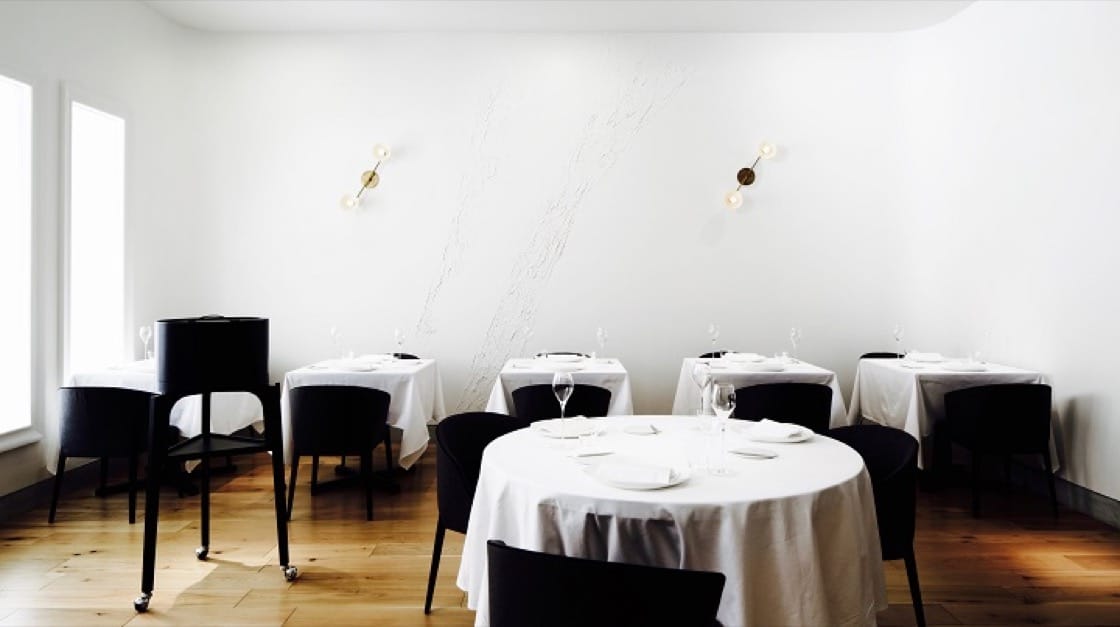 The dining space of La Cime has an air of Scandinavian minimalism. (Pic: La Cime)

In 2010, he returned to Osaka to open La Cime, which means “the peak” in French. The triangular logo of the restaurant represents the balance between food, space and customers. Takada took Danish dining icon noma as a style reference for his restaurant's minimalist, Scandinavian interior design.

In the kitchen, creativity is key, says Takada. He creates about 300 dishes per year, as a form of exercise, he says. In an earlier interview with Pocket Concierge, a Japanese table reservation platform, he said he would open the fridge every morning, cook up something new, and document it with a camera. There is no theme, and no restrictions. He takes guidance from different smells, listens to music and has conversations with others every day to stimulate his senses. Books about French cooking from the 17th to 19th century are another source for new ideas.

“I don’t insist on a certain style. Style changes,” Takada says, explaining how he tries to change things up every year. His choice of ingredients and techniques reflect memories of his hometown in Amami Oshima, and form a common thread in his creations. 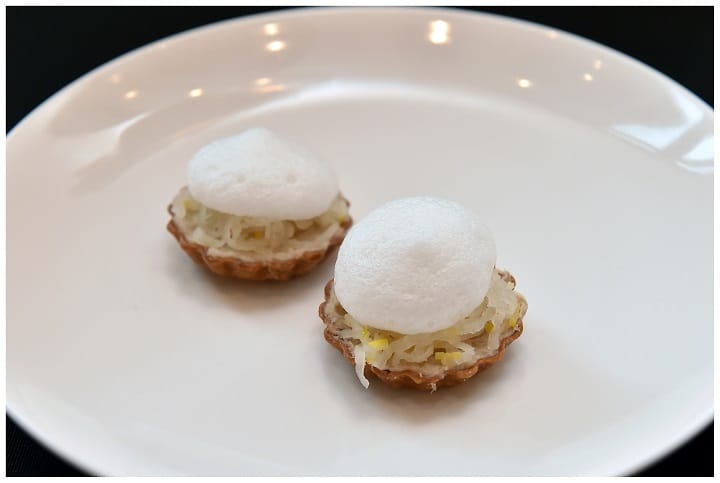 Collaborations with other Asian chefs in four-hands dinners over the past few years have helped to spark new ideas. Dishes on his menu often draw from other Asian cuisines, and explore the synergy and nuanced differences between the cuisines and cultures. In one such dish, for example, Takada uses Japanese sake kasu, egg yolk and flour to make a tart crust, before filling it with dried Japanese mackerel and Korean-style kimchi made with daikon radish from Taiwan. 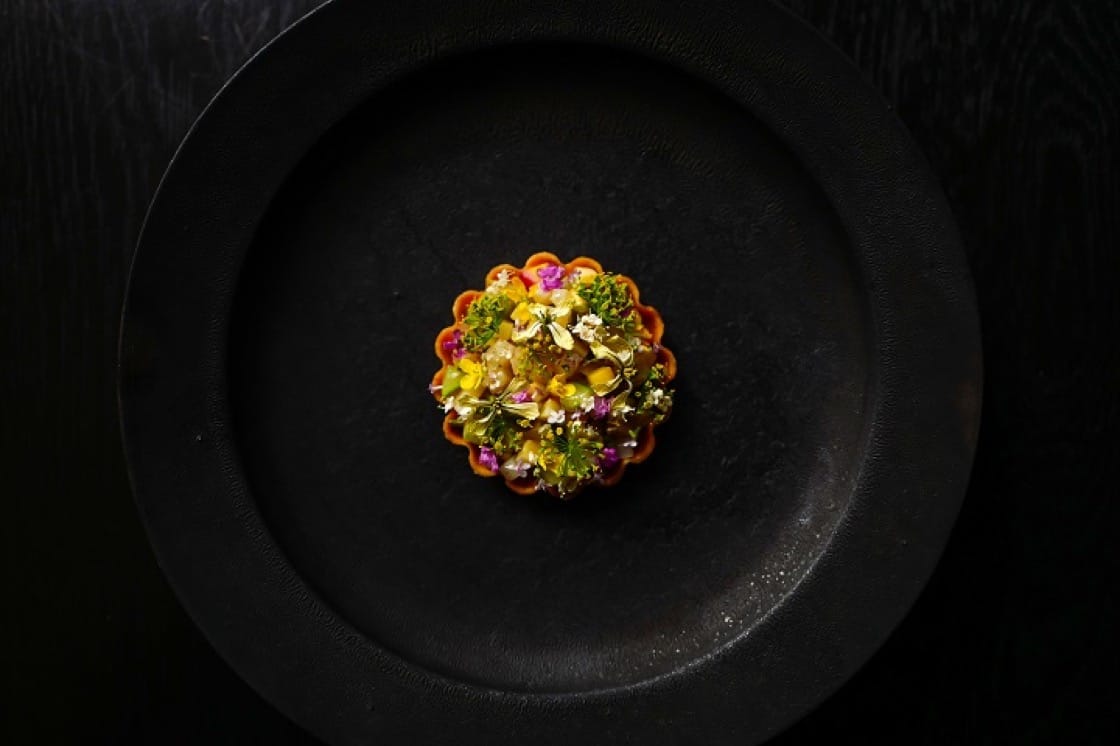 Takada's creative cooking. (Pic: La Cime)
When was your first encounter with the MICHELIN Guide?
I only knew about the MICHELIN Guide when I entered culinary school at 20 years old and my teacher told me about it. I cook French cuisine and the Guide was first published in France. Therefore, it made me very happy to receive these stars later on.

Do you still remember the time when you first got the star in 2012?
I said “wow!” and I cried at the ceremony.

How did you celebrate?
As soon as I got the medal, I mailed it to my father and mother in Amami Oshima. They were really excited to see it. Even the people they knew went to them to celebrate with them.

How has the MICHELIN Guide influenced your career?
That book is like law. It keeps me diligent and ambitious. After the second star, the third one is ahead.

Does the star change the restaurant or the way you cook?
Going from one star to two, we have seen more customers and a change of clientele. Besides Asian diners, those from Europe and America have started to come. With more customers, we need to hire more cooks. The quality of cooking has been rising. It’s a good thing for us.

Do you have any advice for young chefs aiming for MICHELIN stars?
Do not care too much about the people around you. Thanks to Instagram, you can follow certain chefs or culinary organisations now to see a ton of food-related content. Try not to be swayed by things like that. Keep persevering with your personal style. It is fine to take a look once in a while to find inspiration, but don’t be obsessed and lose your own identity.