Thailand and Switzerland may be miles apart but their cuisines share more similarities than one would expect.

Swiss-born chef Andreas Caminada, chef-owner of Michelin-starred restaurants Schloss Schauenstein and IGNIV in Switzerland, felt right at home with the brazenly tart and acidic flavours from green papaya salads and the liberal use of fish sauce during a recent Bangkok stop as part of a guest chef series in the St Regis Hotels in Singapore, Malaysia and Bangkok.

Speaking to the MICHELIN Guide Digital during his Singapore stop, the strapping 40-year-old chef says: “In Switzerland, we pickle almost everything; that’s why I like light, acidic flavours that cuts through the palate. I am fascinated with Thai ingredients such as green papaya, vinegar and calamansi. The sourness of these ingredients balances the heaviness of the food and makes it easier to eat more.” 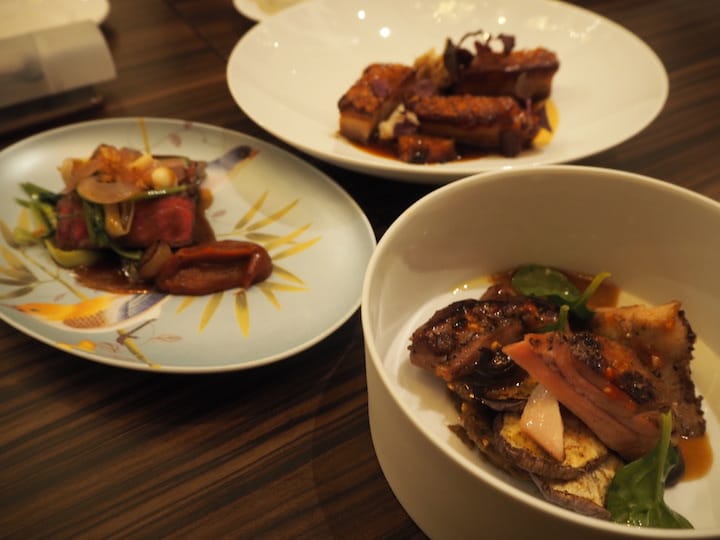 Swiss dishes such as beef with morning glory stalks and onions, chicken with aubergine, lemon and garlic, and pork belly with harissa and sea buckthorn. (Credit: Kenneth Goh)

Some dishes that Caminada presented at a series of dinners at the St Regis Singapore recently were inspired by his Bangkok stint. These dishes include a cold dish of langoustine served with papaya and spices, and a dessert course of green mango and coriander.

Besides bringing his casual, sharing plates concept from IGNIV to Asia, he also presented its signature dishes such as the bisque-like fish soup, a velvety block of foie gras topped with meringue and tomatoes, and beef with morning glory stalks and onions. IGNIV, which means “nest” in the Swiss Rhaeto-Romanic language, has two branches in St Moritz and Bad Ragaz. Both restaurants have received one Michelin star.

Referring to Schloss Schauenstein as “my castle”, the restaurant, together with a nine-room boutique hotel, is housed in a 13th century castle in the Swiss Alps. It is known for its creative contemporary Swiss cuisine that uses ingredients that are grown in the vicinity of the restaurant. Caminada shares more about Swiss cuisine here. 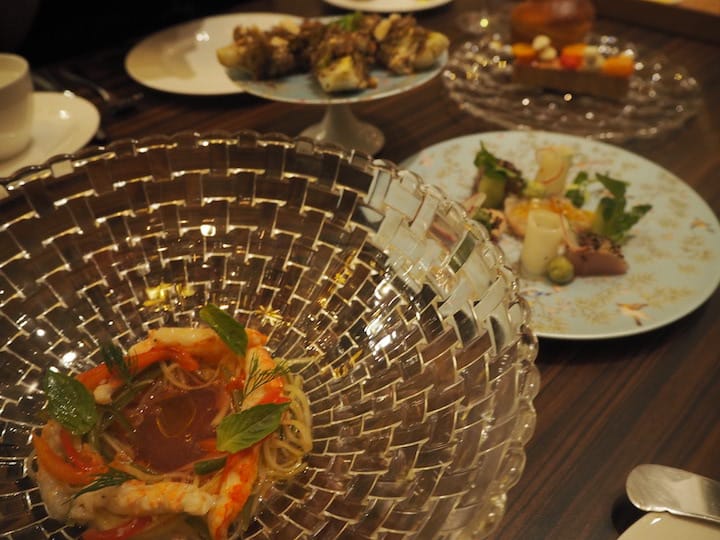 Andreas Caminada enjoys tart and sour flavours that are displayed in this starter of Langoustine, papaya and spices. (Credit: Kenneth Goh)

1. What is Swiss cuisine?

Swiss food has its roots in French cuisine and, like Switzerland’s renowned reputation for watch-making, cooking is also done with great precision. Besides French ingredients, my team at Schloss Schauenstein has gone more regional in the last five years by using ingredients, from dried pears, apples to meat, from farms around the restaurant,

2. What are some of your favourite Swiss ingredients?

Apples. More than 20 variety of apples grow in the valley near Schloss Schauenstein. These apples are usually in-season every September and October. Sometimes, I pickle and dehydrate them or make sweet and sour liqueurs and vinaigrette from the fruit.

I also like making mulled wine with apples and use the liquid residue from cooking apples to make into a butter-infused ice-cream. I also like smoking and pickling wild-caught local sweetwater fishes, such as trout and whitefish.

Not many people know that Swiss food has an acidic and tart side with the use of vinegar, sauerkraut and fermented vegetables. Of course, a lot of ingredients in Swiss cuisine are also pickled. The sourness helps balance the heaviness of the dish, so that we can eat more of it.

4. What is one Swiss dish that you cannot get enough of?

A very typical regional dish is ravioli stuffed with dried pears (above). I use dehydrated pears that are grown from a tree that is more than 100 years old. Some years, the harvest is low but there is a bountiful supply of pears this year. I bake these ravioli in a wood-fired oven and serve them with charcuterie such as salsiccia to balance the sweetness of the pear. This dish is served in my guest house, Casa Caminada, which opened last month.

5. What is your cooking philosophy?

Cooking has to be honest. When you taste a carrot, it has to be a carrot. I do not like cooking with too many infused flavours. If I use a certain number of ingredients in a dish, their flavours have to come through and be distinct. I like to use regional ingredients that I have eaten from young and put in a lot of work to make them sparkle.