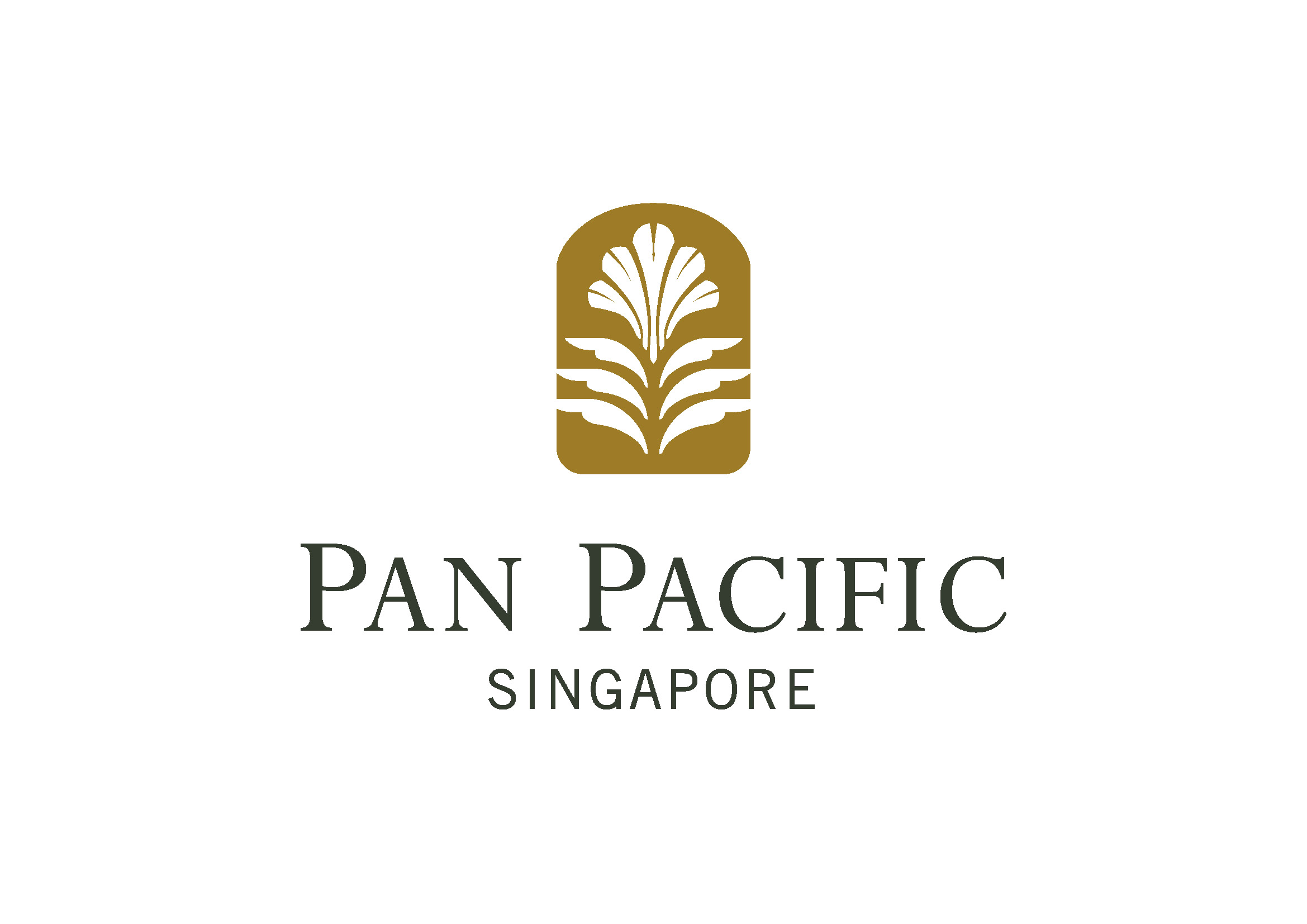 Cantonese restaurant Hai Tien Lo in Pan Pacific Singapore turns 32 this year, but its cuisine is far from stagnant. Over the decades, the restaurant has established a reputation as one of the most respected Chinese restaurants in Singapore, which has groomed celebrated chefs on the local Chinese culinary scene.

The latest name to head Hai Tien Lo is executive chef Ben Zeng, who joined the restaurant last October. The Guangzhou-born chef, who has been based in Singapore for more than two decades, says in Mandarin: “Hai Tien Lo has a rich history — many regulars have dined here since the restaurant was on the 38th storey of the Pan Pacific Singapore. However, it has also constantly progressed with the times by injecting contemporary touches into traditional Cantonese cuisine.”

Hai Tien Lo, which translates to "stairway to heaven” in Chinese, alludes to the restaurant’s erstwhile location on the 38th and top floor of the Pan Pacific Singapore, before it was relocated to the third floor during the hotel’s major revamp in 2012. 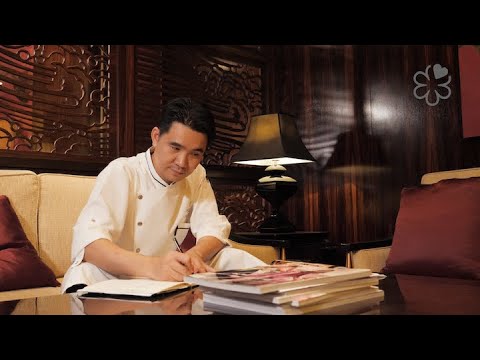 The MICHELIN Guide Dining Out Series: Waves Of Change
Since Zeng joined the restaurant, he has been pushing the envelope of driving modernity into Chinese food through drawing inspiration from other fusion cuisines, in terms of cooking and presentation techniques.

This shouldn’t come as a stretch as Zeng, who is a second-generation chef, was part of the opening team for modern Chinese restaurant Hakkasan in Miami that was started by famed restaurateur Alan Yau. 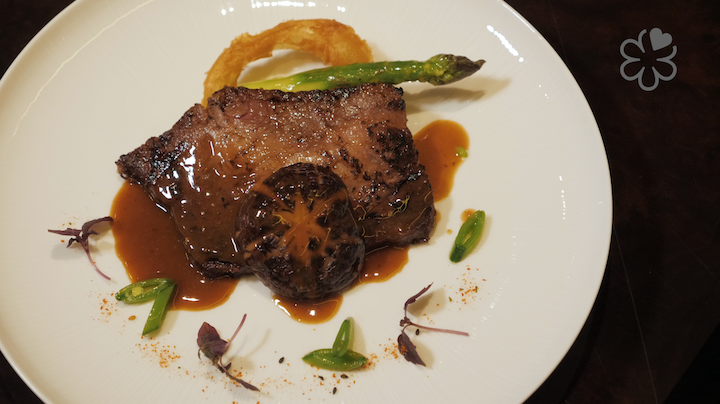 Instead of pan-frying, Chef Zeng fries the ribeye fillet with red wine sauce in a wok to bring up the aroma of the beef.
Take one of Zeng’s signature dishes, Wok-Fried Rib Eye Fillet With Red Wine Sauce, for example. The Western steak dish is reimagined in a Chinese style. Zeng says: “Pan-frying is a common technique in Western cuisine, but I have decided to fry the fillet in a wok, where the intense heat from the fire can accentuate the aroma of the beef and add a touch of ‘wok hei’.” Wok hei is wok’s breath in Cantonese.

The dish’s condiments are distinctively Western — the rich sauce is a concoction of beef drippings, foie gras, butter, spring onions and red wine, and the beautifully burnished ribeye fillet is accompanied by fried onion rings, mushrooms and asparagus. 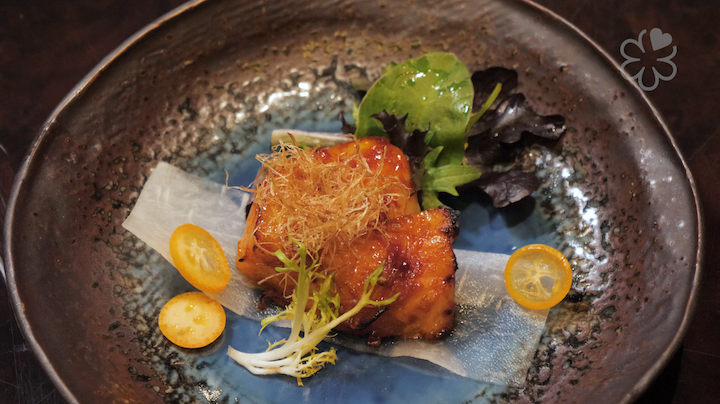 Besides the West, Zeng is amalgamating food influences from other cultures in his cuisine. One of them is the Baked Sea Perch Fillet With Kumquat Chilli Sauce, which is one of the most well-received new additions. The dish, which features gochujang (Korean chilli paste), started out as a customised dish for a Korean bride by Zeng when he was working on a wedding banquet project in another hotel.

He says: “The sea perch is baked in tangy orange peel, which injects a refreshing flavour that brings out its aroma of the fish. The spiciness of the gochujang also masks the fishiness, coupled with the sweetness from the kumquat.”

Although Zeng has been schooled in traditional Chinese cuisine, he is adamant that Chinese cuisine needs to appeal to young people in order to prolong its longevity. He is well aware that Cantonese cuisine does not rank top on the to-eat lists of most youngsters these days, especially in Singapore, where there is a wealth of dining options. 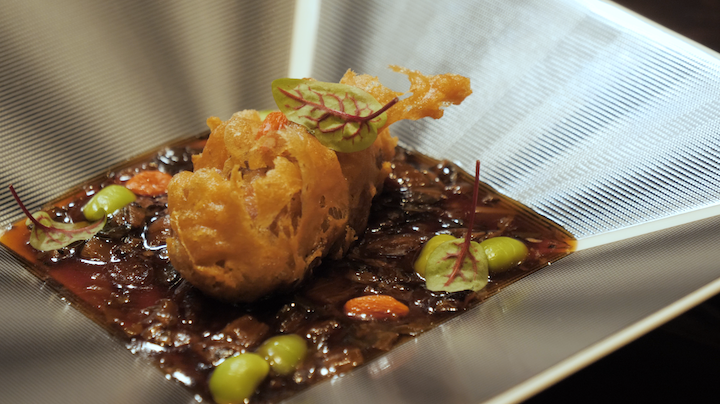 Chef Zeng decided to deep-fry the stuffed sea cucumber as its slimy texture could put off some diners.
Some of them are not accustomed to traditional Chinese delicacies such as the slimy and slippery texture of the sea cucumber. To that end, Zeng has whipped up a new dish of Deep-Fried Crispy Sea Cucumber Stuffed With Minced Pork and Shrimps. Instead of braising, he deep-fries the sea cucumber to yield a crispy casing that covers a soft gelatinous interior.

To give more bite to the sea cucumber, it is stuffed with prawns, minced pork and diced mushrooms. Rounding off the dish is a side of preserved vegetables, which is an homage to Zeng’s Hakka roots.

Besides cooking techniques, amping up the visual aesthetics of dishes is also increasingly vital, given the prevalence of the “mobile phone eats first” mentality. He says: “We have to put in more effort to create visually pleasing dishes in order to give a ‘wow’ factor to diners.” 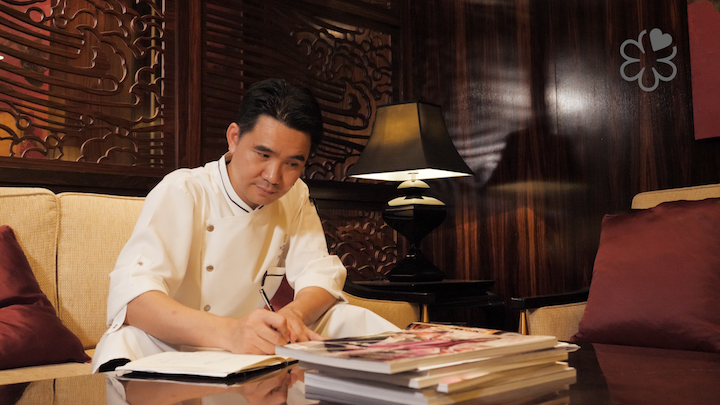 Chef Zeng draws inspiration for plating his dishes from browsing avant-garde fashion spreads in magazines. (Photo: Kenneth Goh)
One of Zeng’s sources of inspiration is avant-garde fashion spreads in magazines. Flipping through the magazines in his free time, he says: “Browsing through fashion magazines enhances my sense of aesthetics. I look out for colour combinations and designs in these fashion shoots and explore ways of incorporating them into the plating of my dishes.”

He shares that his other hobby revolves around traditional Chinese teapots, which are made of zisha, or purple clay. Over the years, he has amassed a collection of more than 100 teapots as he relishes the cathartic process of brewing tea, which yields beautifully nuanced flavours and relaxes him to think up of new ideas for the restaurant. 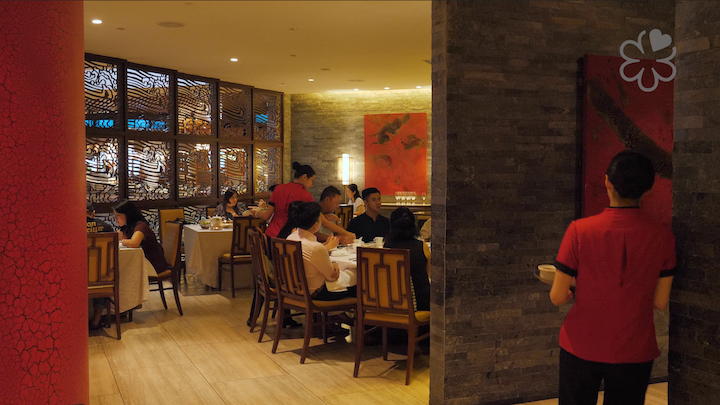 Through introducing some contemporary Cantonese dishes into Hai Tien Lo's menu, chef Zeng hopes that more young people will be drawn to the cuisine.
Striking a balance between experimenting with modern touches and not alienating restaurant regulars is an uphill challenge for Zeng. Besides winning over diners, his kitchen team also needs to adapt to new ingredients and cooking methods.

“When you have to convince long-time kitchen staff to adopt new cooking methods, they might become resistant,” Zeng reflects. “However, in the heart of every Chinese chef, no one wants to see his heritage fade away. That’s why it is important for them to understand why change is crucial to Chinese cuisine.”