In Anthony Bourdain's book, The Nasty Bits, he refers to offal as a collective hodgepodge of varietal cuts: oddball trims and scraps that are all useable...and edible. The same book also quotes, "Nearly anyone, after a few tries, can grill a filet mignon or a sirloin steak. A trained chimp can steam a lobster. But it takes love, and time, and respect for one's ingredients to properly deal with a pig's ear or a kidney."

Offal thrives in Singapore's hawker culture. In the local dining scene, its abundance cannot be denied especially in dishes rooted in heritage such as kway chap and pig's organ soup. The preparation of these unwanted cuts of meat and organs requires a lot of work, usually involving long hours scraping down every last vestige of grit and impurities in intestines and lungs, or hunched over piping-hot vats of soup, straining out scum and ensuring a well-cooked kidney. 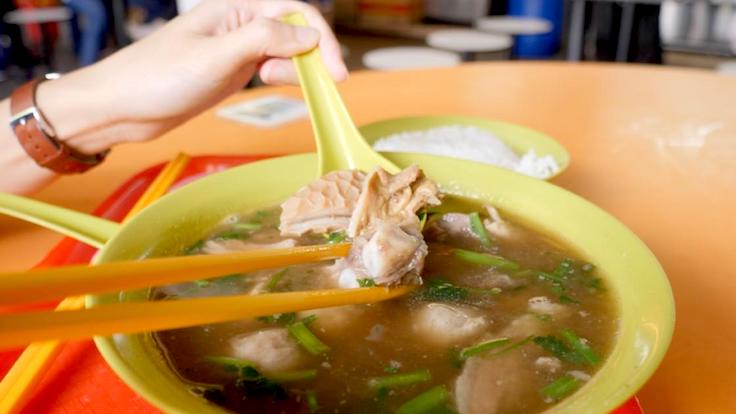 This Bib Gourmand stall at Bukit Merah View Food Centre has been around for more than 30 years and regularly draws a long queue of patrons eager for its herbal mutton soup. Customers can choose from a whole range of mutton parts for their soup, including prime ribs, meatballs, tripe, tendon and even lamb brain. The herbal soup is garnished with a handful of coriander leaves, along with a side of rice and some chilli sauce for dipping. According to the Michelin inspectors, this spot has mastered the art of cooking mutton. 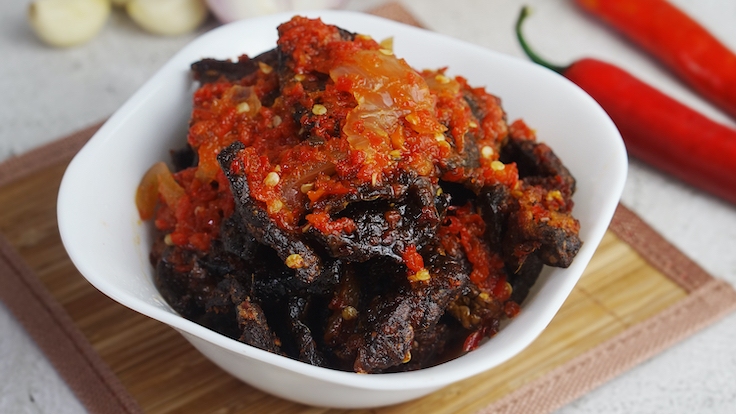 Paru Goreng is considered an Indonesian and a Malay delicacy made with beef lungs.

Located in a narrow street just behind the Masjid Sultan mosque at Bugis, this wildly popular nasi padang restaurant is always bustling with customers who enjoy choosing from a wide array of Malay and Indonesian dishes. Those in the know head for the more unusual offal dishes that are notoriously time-consuming to prepare: the paru goreng balado features chopped-up beef lungs fried in sambal balado, a fragrant chilli paste of kaffir lime leaves and lemongrass, while the sambal goreng pengantin is made by simmering beef lungs and liver until they are tender before they are cubed and stir-fried in a rempah (spice paste) with fresh prawns.

MICHELIN-listed Indonesian restaurant Tambuah Mas on Tanglin Road also serves their own version of paru goreng, which is the crispy fried beef lung, served with sambal petai (sambal made with beans) instead. 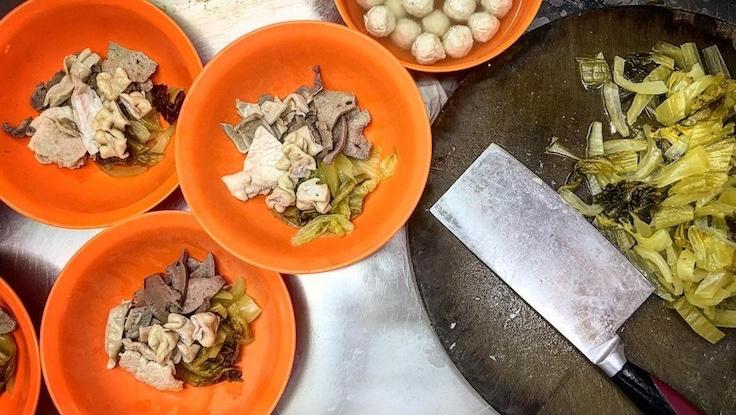 Pig's Organ Soup is usually made with the pig's livers, intestines, and tripe, cooked in either an herbal or peppery broth. (Photo by Koh Brothers Pig's Organ Soup's Facebook Page)

This nondescript Bib Gourmand stall located in the Tiong Bahru Market and Food Centre specialises in zhu zha tang, or pig’s organ soup. The Teochew-style clear soup is made from boiling pork bones and offal with salted preserved mustard vegetables. The soup is heavily seasoned with pepper and brimming with liver, tripe, intestines, fatty pork belly, and meatballs, and is served with rice and chilli sauce.

The stall also offers a dish now rarely seen in Singapore: glutinous rice intestines, a rice sausage made from stuffing a mixture of pork, glutinous rice, and chestnuts, into pork intestine casings. 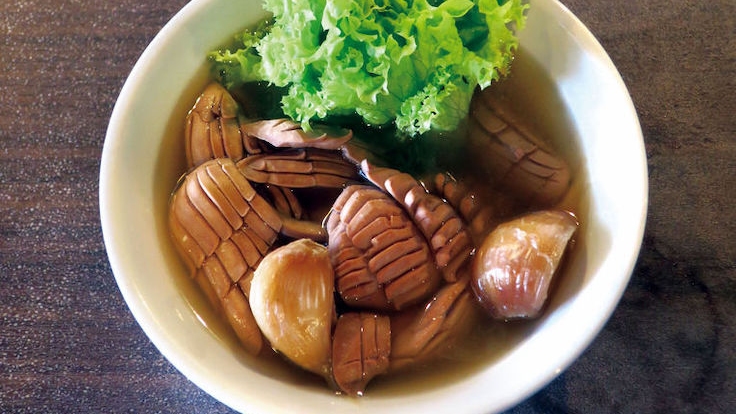 This Bib Gourmand establishment has served bak kut teh (pork ribs soup) for over 40 years now. Each bowl comprises the diner's choice of pork ribs, loin ribs, and premium loin ribs, brewed in a peppery broth concocted with a blend of garlic and Sarawak peppers. Offal lovers can enjoy pork kidneys, livers, and stomach served in the same peppery broth. Complete the meal with some steamed white rice, fried dough fritters, and a dipping sauce of minced garlic and chilli in dark soy sauce.

READ MORE: Behind the Bib: Song Fa Bak Kut Teh 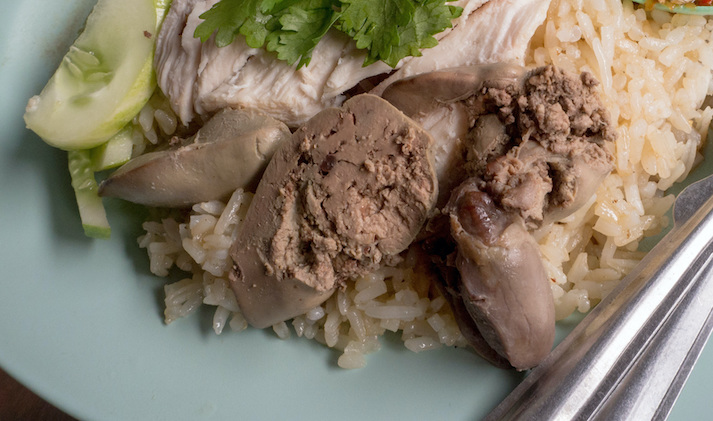 Hainanese chicken rice might well be one of Singapore's most recognised hawker dishes. With its most popular offering evidently being the poached chicken meat and aromatic oiled rice combo, traditional add-ons of chicken hearts, creamy lobes of liver, and crunchy gizzards are also available. A whole new world of textures is opened on the palate with these unconventional off-cuts. Other Bib Gourmand chicken rice stalls where one can get their fill are at Sin Kee Famous Cantonese Chicken Rice and at Tiong Bahru Hainanese Boneless Chicken Rice. 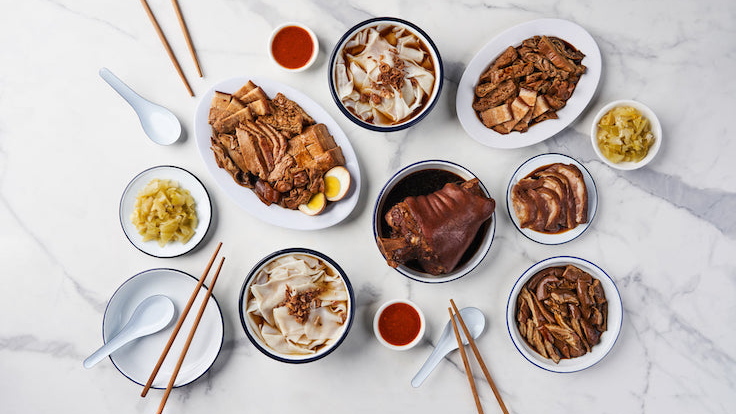 Bib Gourmand stall To-Rico’s Guo Shi specialises in kway chap, a classic Teochew dish that comprises an assortment of soya sauce-braised offal, served with a separate bowl of slippery flat rice noodles in soup. Pork offal such as large and small intestines, stomach, and skin are thoroughly cleaned before they are braised in an herbal soya sauce. According to the Michelin inspectors, the trotter, pork intestine, pork tripe, and kway chap are all recommended.

The last course of most tasting menus, Petit Fours leave a sweet and lasting memory for the diner. Here's what seven MICHELIN-Starred restaurants in Singapore serve in theirs.