Some dining establishments are walking the talk in the sustainable dining movement by advocating these five eco-friendly practices.

More dining establishments, from hotels to standalone restaurants, are doing their bit to put Singapore on the green map. A number of eateries are rising to the occasion by adopting sustainable and green practices that are reducing waste and carbon footprint. Here are five ways that eateries are paving the way of a green culinary culture. 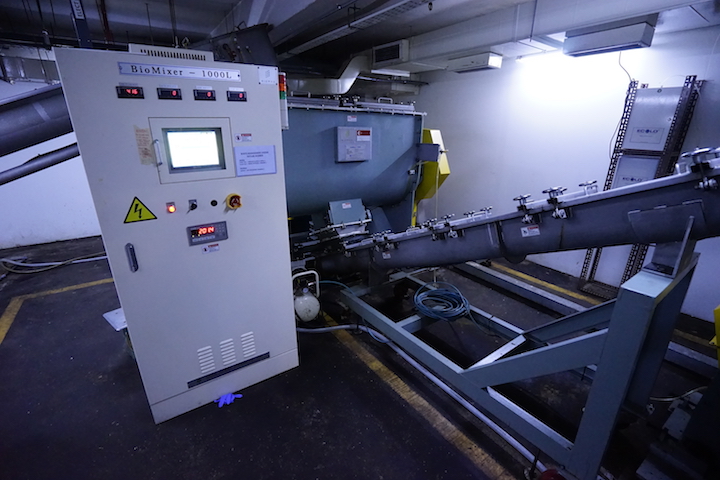 At the MICHELIN-Listed Mandarin Oriental Singapore, which runs MICHELIN Plate Cantonese restaurant Cherry Garden, an aerobic food digester treats up to 20 tonnes of food waste every month. The digester converts waste into greywater, which is untreated used water that can be safely discharged into the sewer. The hotel, which received the Singapore Green Hotel Award 2019 last month, conducts annual waste audits to identify improvement opportunities for reducing, reusing or recycling of wastes.

Grand Hyatt Singapore, another MICHELIN-Listed hotel, was the first hotel in Singapore to install an in-house waste management plant, which converts 1,000kg of daily food waste from the hotel’s five restaurants, including the MICHELIN Plate buffet restaurant Mezza9, 16 event venues and 677 rooms to 300kg of organic pathogen-free fertilisers within 24 hours. This has eliminated the use of 55,000 trash bags and saved the hotel from spending $100,000 per year on waste haulage.

MICHELIN-Listed Sofitel Singapore Sentosa Resort & Spa has installed a smart food waste tracking system in one of its kitchens to monitor the amount of food waste generated. The Winnow System is a smart meter that is integrated with a kitchen’s waste bin and comprises a scale, an LCD panel and wireless connectivity. The information obtained has enabled the hotel to better estimate the amount to cook to avoid overproducing. According to Sofitel, the adoption of such a system has reduced its food waste by 2 to 4%.

MICHELIN-Listed integrated resort Marina Bay Sands, which runs two-MICHELIN-starred Waku Ghin and one-MICHELIN-starred CUT By Wolfgang Puck, aims to procure 50% of its seafood from eco-friendly sources by next year, up from the current 28%. Today, the integrated resort uses 90 types of seafood including salmon, tilapia, prawns, mussels, and lobsters that are from sustainable sources certified by the Marine Stewardship Council and Aquaculture Stewardship Council.

At Grand Hyatt Singapore, about 75% of its seafood are from sustainable sources. The hotel imports 200 tonnes of seafood annually. Examples of sustainable seafood include Spencer Gulf King from Australia, Atlantic salmon from Tasmania and Norway, wild pink salmon from Alaska and oysters sourced from places including England, Scotland, France, Canada, Japan and Tasmania, depending on the seasons. 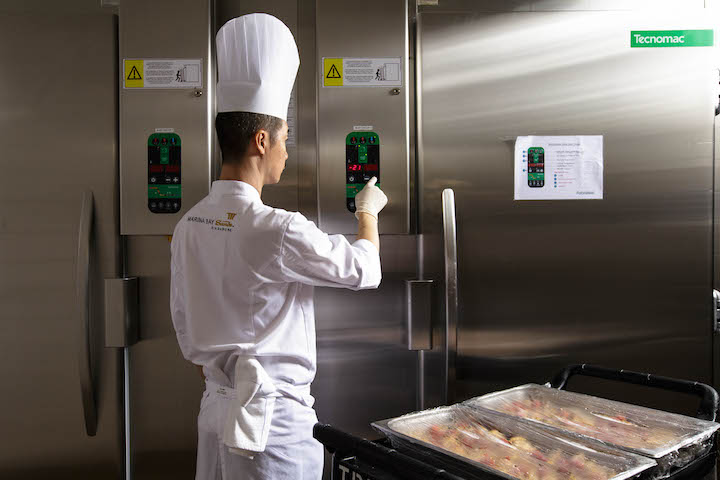 Excess food is placed in blast chillers before it is donated to ensure its freshness. (Photo: Marina Bay Sands)
3. Energy-saving Initiatives

Grand Hyatt Singapore is also one of the pioneers in Singapore to install a gas-powered trigeneration plant to provide 30% of its electricity needs, generating hot air for its laundry facilities and air-conditioning. This initiative has helped the hotel to reduce its carbon footprint by 1,200 tonnes per annum.

Last year, Marina Bay Sands donated 84,000 pieces of unconsumed buns to non-profit charity organisation, Food From The Heart, which distributes unsold bread and non-perishable items to the underprivileged. The integrated resort also donated 2,000 kg of unserved cooked food to another charity, The Food Bank Singapore, last year. The food is placed in the industrial-grade blast chillers to ensure that it is safe for consumption.

For Grand Hyatt Singapore, excess bread and pastry items from the hotel’s daily breakfast service are set aside for donation to Food From The Heart. The hotel blast-chills leftover cooked food such as rice dishes, curries, seafood, noodles and chicken before packing them into vacuum-sealed bags, and partners with socially conscious food truck, Kerbside Gourmet to distribute to needy families at the South Central Community Family Service Centre twice a week. 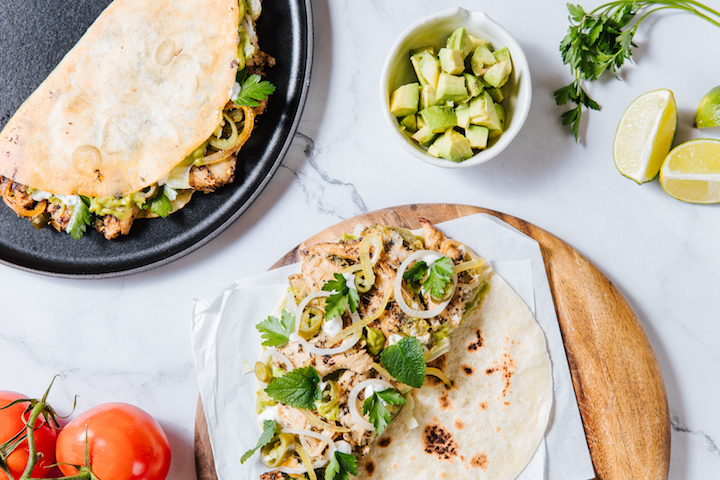 One-MICHELIN-starred steakhouse CUT By Wolfgang Puck offers a meat-free alternative to its signature Mini Kobe beef sliders with plant-based “beef” patties from Impossible Foods. The Silicon Valley start-up makes a soy-based “meat” that contains heme, an iron-containing molecule, which gives off “a meaty flavour”. Heme is found in leghemoglobin, which originates from soy roots.

Last month, Grand Hyatt Singapore was the first dining establishment to use Heura, a plant-based gluten-free chicken alternative that is made in Barcelona. Heura is made from non-genetically-modified soybeans that yields the same meaty texture and flavour as chicken. The Heura Food Truck Launch, which offers Grilled Heura Panini with house-baked focaccia and vegan mozzarella, and Grilled Heura Tortilla topped with cashew nut sour cream, is on till Sunday. After this promotion, there are plans to incorporate Heura into the menu at the buffet restaurant Mezza9.