Recipe for Ondeh-ondeh or Klepon

The history of this Southeast Asian sweet treat - and an honest, time-honoured recipe.

Few sweet treats can boast of being so well-loved that its recipe has crossed continents and has folk songs sung and written in its devotion. Take a bite of the ubiquitous green starch balls and you will soon understand why: these coconut-covered morsels burst with an eye-popping decadence of molten palm sugar. This is ondeh-ondeh if you’re in Singapore, Malaysia and parts of Sumatra – or klepon if you’re in Java, where it originates.

This difference in name is just another testament at how well-loved (and travelled)  it is. From Java, the sweet treat spread across the Malay Archipelago and in its wake, even inspired a folk song. But the humble confectionery's journey did not stop there. It was adapted by the Peranakan community and ended up in the Netherlands by way of Indonesian immigrants who moved West in the 1950s, where it is sold today in Asian restaurants and supermarkets thousands of kilometres from its birthplace. 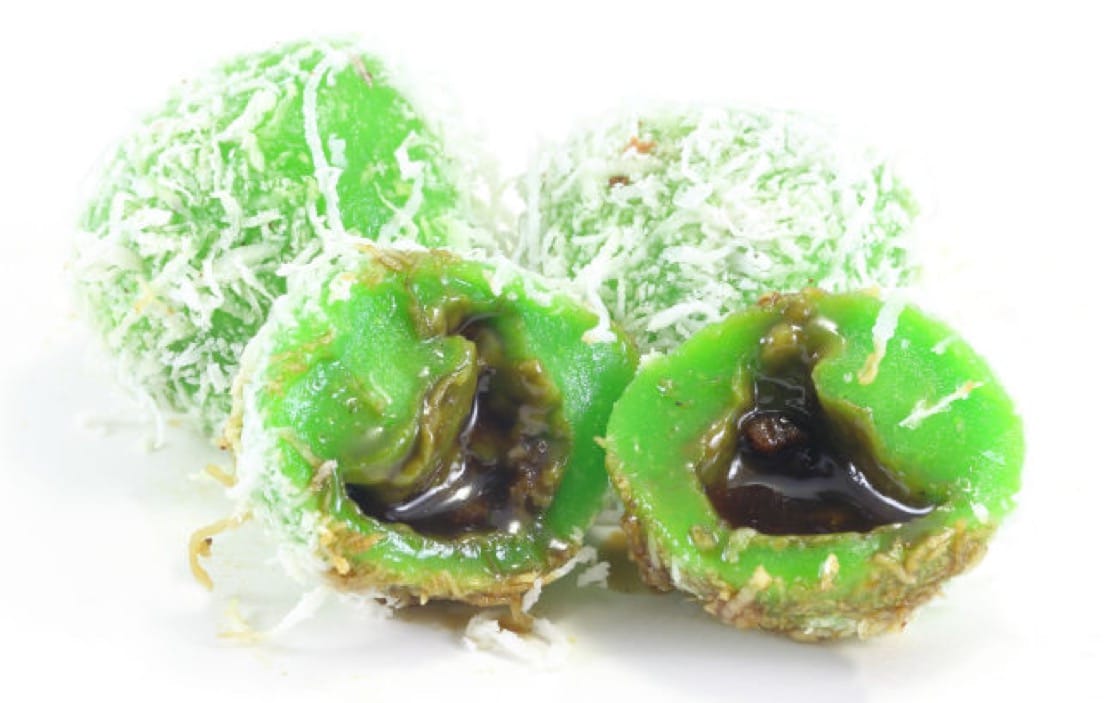 In present day Singapore, ondeh-ondeh is found in eateries as diverse as Malay stalls in hawker centres to nasi padang specialists and Peranakan eateries. Some cafes have even adapted its flavours into an indulgent ondeh-ondeh cake.

Here, we share our ondeh-ondeh or klepon recipe that cuts no corners. Instead of using pandan extract or food colouring, our recipe calls for real pandan juice, giving the rice cake casing a natural green hue. One point to note though, while gula melaka is used in Malaysia and Singapore, Indonesians use gula jawa. Both are versions of palm sugar.

This recipe is highly forgiving so while measurements are provided here, small tweaks - like the amount of gula melaka - can be made to suit your palate without affecting the end result. The steps are relatively straightforward but bear in mind that it can be labour-intensive.

1. Make the pandan-coconut milk juice
Cut pandan leaves into thin strips and place into a blender. Pour in the coconut milk and blend until fine. Next, use a cheese cloth or a strainer and squeeze out the juice. Note that the pandan leaves' fibres will not dissipate so the thinner the leaves are cut, the better. The resulting liquid should be a dull jade-green.

2. Mix the juice with glutinous rice flour
Using a spoon, stir in the pandan-coconut milk juice into a bowl containing the glutinous rice flour. Once the mixture starts to come together, knead it lightly until smooth. The texture should be similar to bread dough. If the flour is still too hard, add extra pandan-coconut milk juice by the tablespoon. Once done, form into the shape of a ball, cover and leave to rest as you prepare the next steps.

(Related: What is...QQ?)
4. Prepare grated coconut
Place the grated coconut on a dish, cover it slightly and microwave on high heat for one minute. This steams the coconut to cook it. Once done, sprinkle salt and stir till well-mixed. The grated coconut acts as a mildly savoury element to counter the sweetness of the centre.

5. Form balls
Return to the dough mix. Separate enough dough to form one-inch balls. Roll them into a sphere and make an indentation to place the gula melaka cubes. Once in place, roll into a complete ball, making sure that no part of the gula melaka is exposed or it will seep out during cooking. Note that each ball should ideally be bite-sized as the ondeh-ondeh’s molten centre will ooze out if it requires two bites.

6. Cook
Bring water in a deep pan to a boil. If you have any pandan-coconut milk juice remaining, pour it in, for extra flavour. Lower the balls in slowly, one at a time, and leave them in the rolling boil. Be sure to stir to stop the balls from sticking to the bottom of the pan. The ondeh-ondeh/klepon is ready once they float to the surface.

7. Serve
Once cooked, remove them from the water with a slotted spoon and roll it around the grated coconut. Note: The gula melaka within is scaldingly hot so wait for it to cool slightly before eating to avoid burning your tongue.