Mise en place, the art of assembling ingredients and equipment before starting to cook, is standard operating procedure in professional kitchens, where line cooks can spend hours prepping their station and ingredients for service. In many restaurants, especially where menus may change only a few times a year, the routine of mise en place can become something of a ritual, preparing ingredients and cooks for the work to come.

Loosely translated, "mise en place" is a French term for "in its place." In the world of cooking, it refers to gathering and setting up everything required to prepare a dish, or multiple dishes in large quantities in restaurant kitchens, making sure each ingredient is ready to play its role before the actual cooking begins. Many believe the concept stems from the kitchen brigade system created by culinary royalty Georges-Auguste Escoffier, a chef who rose to prominence in the 18th century as an advocate of French fine dining.

Escoffier is thought to have based his system on his years of experience as a soldier in the French army, applying a military-like hierarchy to the restaurant kitchen. Each position had a clearly defined role with an equally clear set of tasks to be completed before, during and after each service, likely the first iteration of mise en place. Before Escoffier’s brigade system, chaos was often king in the kitchen as cooks hurriedly worked to prepare every dish before moving on to the next order. Assigning each staff member specific duties or dishes streamlined the cooking process and eliminated the free-for-all mentality and atmosphere, bringing a sense of calm to the kitchen. 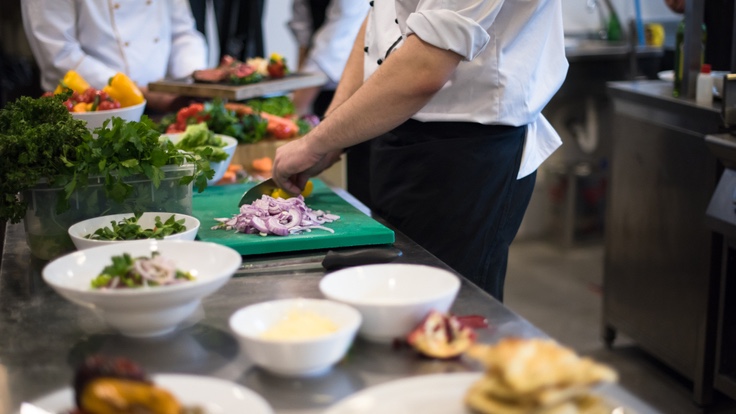 An organised mise en place is half the battle won. (Pic: Shutterstock)

The goal of mise en place is two-fold: organisation and focus. Assembling your ingredients before starting to cook forces you to read your recipe—if you’re following one—a necessary step many eager cooks skip. It also gives you the gift of focus. Without the bustle of chopping one ingredient while sweating another or tending several different dishes at once, you can focus solely on the task at hand, giving each step of the cooking process your undivided attention, and avoiding the inevitable missteps that can come with culinary multitasking.

The Benefits Of Mise en Place At Home

Home cooks may argue that mise en place isn’t necessary where the goal is simply to prepare one meal, not many. However the tenets of mise en place prove just as valuable at home as they do in restaurants. Home cooks often dive into a recipe in order to hurry things along, only to find they’re missing a key ingredient or have failed to properly prep an element. With mise en place, there are no surprises. It forces you to read your recipe from start to finish and assemble your ingredients, making sure you have everything you need to finish your dish and giving you an opportunity to deal with ingredients requiring special attention. The rising popularity of meal prepping makes mastering mise en place an essential tool for home cooks.

Mise en place also makes it easier to cook cleanly, meaning your workspace is neat and tidy throughout the process, a bonus no matter what type of kitchen you’re in. Prepping ahead allows you to clean as you go so once the cooking begins there’s less clean up at the end.

Restaurant kitchens are stocked with hotel pans and assorted containers to hold mise en place in various quantities. At home, use items already present in your pantry to sort your ingredients. Everything from sheet pans to bowls, ramekins or muffin tins will serve your purpose. Sort your ingredients and set them aside until you’re ready to cook. Consider your kitchen the set of your very own cooking show, complete with ingredients neatly assembled and tucked into appropriately sized containers.

Mise en place is such a vital aspect of learning to cook professionally that it’s one of the first lessons taught in culinary schools. It’s second only to properly holding a knife in terms of importance, and like proper knife skills, mise en place can make cooking in restaurants and at home more efficient and more enjoyable.

Danielle Turner is a personal chef, cooking instructor and writer happily eating her way around Washington, D.C. She met her first shallot in culinary school and they’ve been fast friends ever since.

Like Singapore, the dining landscape in the US is facing a labour crunch with the high demand for staff and tipping among the causes.