These days Michelin House, at 81 Fulham Road in Chelsea, London, is home to Claude Bosi’s Bibendum Restaurant and Oyster Bar.

Here are six things you might not know about this iconic building:

It was built in 1911 for the Michelin Tyre Company 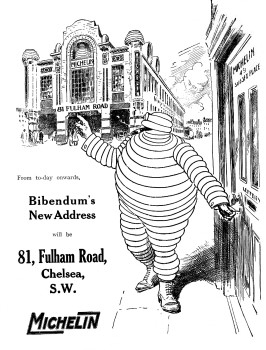 Michelin House was originally built as the Michelin Tyre Company’s UK headquarters, which opened for business in 1911. The building was specially designed by Michelin employee François Espinasse (1880-1925) and was part of the expansion of the Michelin brand across the Channel.

The front of the art deco building was originally a tyre-fitting bay for passing motorists; the building also housed a sales area and a touring office, where motorists could plan their journeys.

The first Michelin Guide for the British Isles was published in 1911; its aim was to encourage travel – thereby boosting car and tyre sales – and it was filled with useful information for motorists including where to fill up with fuel, where to eat and where to stay. 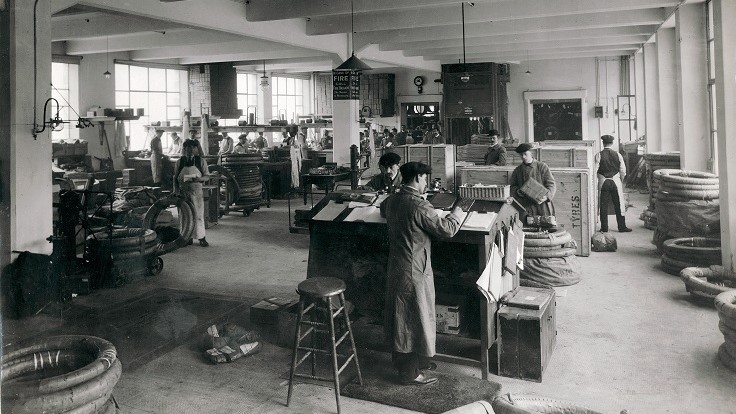 One of the tyre-fitting workshops at Michelin House, circa 1912

The architecture of Michelin House reflected the unique and innovative advertising style that Michelin used to promote its brand and products. Stained glass windows, ceramics, ironwork... everything was worked out down to the last detail to attract the attention of customers and this triumphant installation marked the beginning of a long international expansion.

It is designed around Bibendum 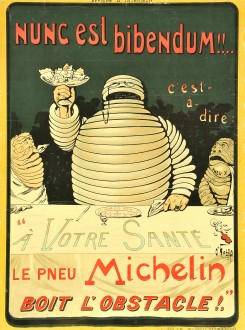 Bibendum, also known as ‘Bib’ or ‘The Michelin Man’, dates back to the 1890s, when the Michelin brothers created their mascot from a stack of tyres (which at the time were coloured white).

Bib was often seen raising a glass in his ads with the words ‘Nunc est Bibendum’, which is Latin for ‘now is the time to drink’. His goblet was filled with nails and broken glass, to show how tough and hardy Michelin tyres were, and that they would not puncture easily.

Michelin House was built as an ode to the glory of the tyre and The Michelin Man, with mosaic floor tiles showing Bibendum raising his goblet, and a dramatic backdrop of stained glass windows portraying him as a kickboxer and a cigar-puffing cyclist. Ceramic tiles on the walls depicted the exciting early days of motor racing and two cupolas, built to look like piles of stacked tyres, framed the building. 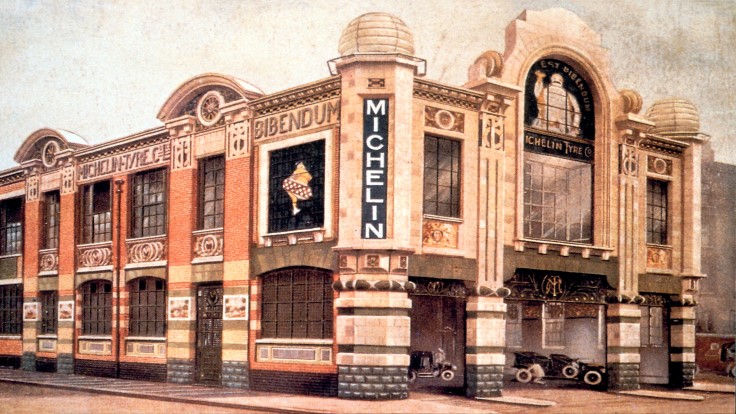 The stained glass was taken out during the war

In the 1930s, although Michelin continued to use parts of Michelin House, they moved their head office to Stoke-on-Trent. The stained glass windows were removed to avoid bomb damage during the war.

When the war was over, Michelin returned its head office to London but the company no longer occupied the entire building, leasing the rest to tenants. 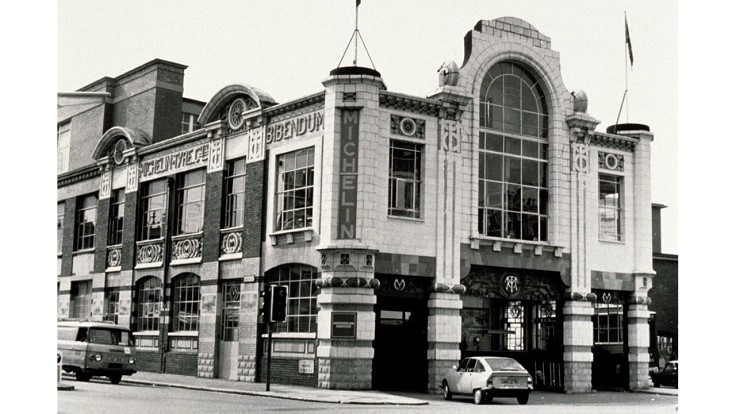 In 1969 the Fulham Road facing front section of the building was given a Grade II listing on the National Heritage List for England. 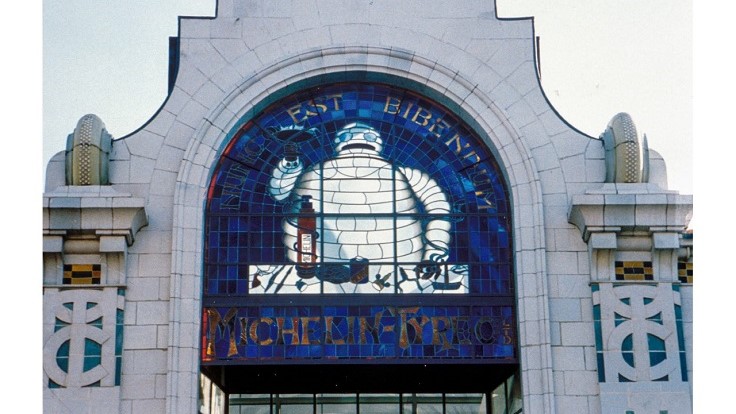 In 1985, Michelin fully relocated to Stoke, selling Michelin House to publisher Lord Paul Hamlyn and retailer/restaurateur Sir Terence Conran for £8 million. They subsequently extended the building, restoring many of its original features and creating replicas of the windows and cupolas using drawings and photos.

In 1987, Michelin House reopened: a combination of office space, retail outlets – and a restaurant and oyster bar called Bibendum, in homage to the Michelin Man. The chef was Simon Hopkinson and the food was top-notch; it very soon established itself as a fashionable and popular city spot.

In 1994, Hopkinson left the kitchen to pursue a career as a food writer and later, TV presenter, remaining in a consultant role and retaining his stake in the business until the noughties. 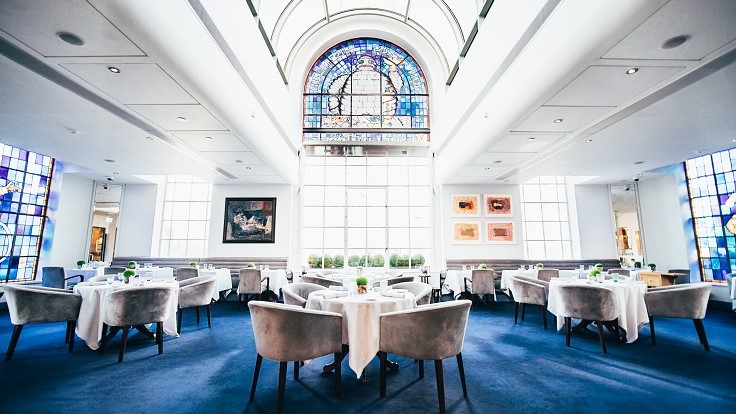 It was awarded Two Michelin Stars in 2018

In 2017 Claude Bosi relaunched Bibendum restaurant in partnership with Sir Terence and Paul Hamlyn’s son Michael, and in 2018 it was awarded Two Michelin Stars, which it has held ever since.

Bosi’s cooking shows a man proud of his French heritage and confident of his abilities, with classics like Brittany rabbit with langoustine and artichoke barigoule, and turbot à la Grenobloise on the menu, alongside the must-try chocolate soufflé.

And, although Michelin no longer own the building, from the windows to the artwork; the butter dish to the salt and pepper pots, The Michelin Man remains omnipresent. 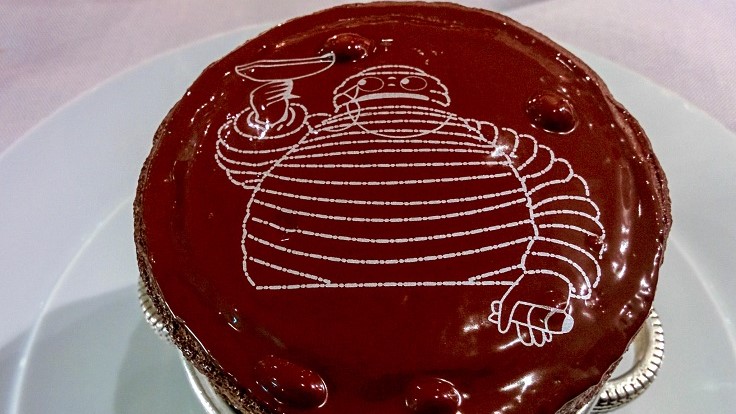