As a child, Ryota Kappou Modern's chef-owner Ryota Kanesawa had long known what he wanted to be when he grew up.

His parents, grandfather and uncle each ran their own restaurants in Osaka, so the food tradition runs deep in the Kanesawa family. Born in 1981, Kanesawa started helping out in his father's kitchen at the age of five, where he developed a deep admiration for his father's work, from the way the older Kanesawa held his knives or fried his food to the casual bantering with the restaurant's guests. It was all exceptionally charming to the young Kanesawa.

He eventually joined the restaurant trade after graduating from college when, thanks to an introduction from his mother, he got his first job at Kagairo, a kaiseki restaurant with more than a hundred years of history in Osaka. He followed the head chef of Kagairo to Hotel Hanshin Osaka shortly after, where he spent three years washing and cooking rice before he was allowed to learn the art of sashimi and other techniques. He worked for 18 hours each day under the strict tutelage of his master chef. Many of his colleagues had quit over the next few years, but he stayed. The thought of quitting had never crossed his mind, according to Kanesawa.

"There were more than 40 chefs when we were in Kagairo, and my master was the best among them. I respected him and never thought of giving up, because I was grateful that someone like him was willing to guide me," said Kanesawa. 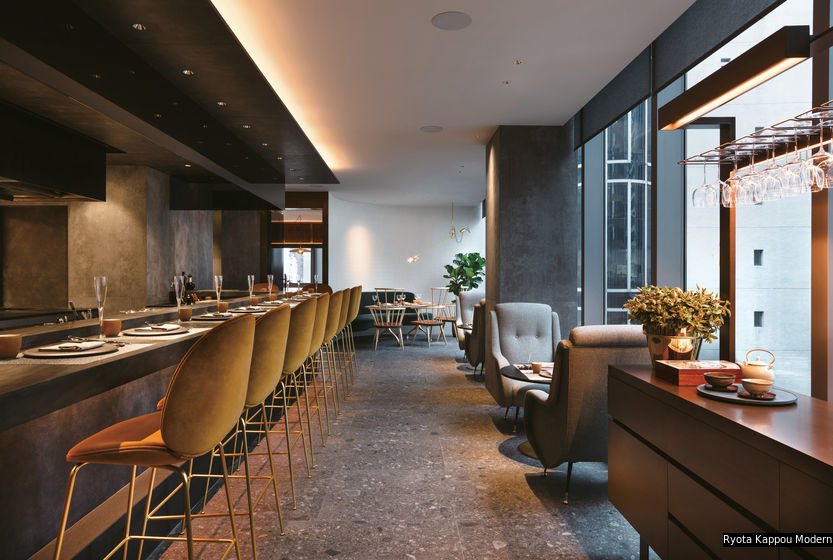 According to the MICHELIN inspectors, the restaurant's floor-to-ceiling windows allow expansive views, and the designer furniture and artisan tableware exude style.

His perseverance paid off: he got to rotate around different positions in the kitchen, where he could broaden his skills. He was later transferred to Ritz-Carlton Osaka — run by the same group as Hotel Hanshin Osaka — where he faced another challenge.

"I had the opportunity to work with people from abroad but found myself deficient in foreign languages. Many Japanese chefs do not speak English, but I disagree and I think we should learn to speak good English." said Kanesawa, who often asked English speakers to practice with him.

He eventually left for London, where he had the chance to master the language while working at Roka and Zuma as a barbecue and sushi chef for six years. During his European sojourn, he also moved to Italy for a month to work without pay at casual Italian restaurant La Frasca so he could learn how to make pasta.

Upon his return to London, Kanesawa set himself another goal — to rediscover Asian flavours — and applied to transfer to Zuma Hong Kong as its deputy chef. In 2015, the intrepid adventurer seized the opportunity and joined the two-MICHELIN-starred Tenku RyuGin as sous chef. He was given the opportunity to train at the three-MICHELIN-starred Nihonryori RyuGin in Tokyo to further hone his skills. However, by this time, he had already spent almost 20 years in the industry and felt that he was ready to run his own restaurant. 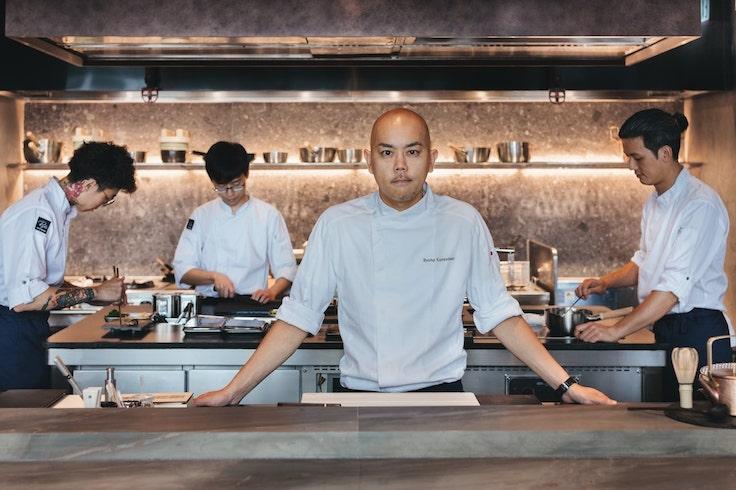 Unfortunately, that dream came to an abrupt pause in 2017. "My left eye suddenly lost its vision one day. It took surgery and three months of recovery for my vision to recover by 80 per cent. It was a reality check for me, and I realised that our lives could be taken away at any time. I told myself, if I am to open a restaurant, I have to act now," Kanesawa said.

With this new urgency, Kanesawa started looking for suitable business partners. As a chef, he was confident about his network of regular customers he had built up in Hong Kong over the years. Fortunately, he soon met an interior designer, Louie Shum, who shared the same aspiration and was looking for a chef to partner with.

"I think we met almost ten times before deciding to enter this partnership. After all, Louie was a stranger to me at that time, and it was not easy to trust a stranger," Kanesawa admitted.

Shum intended to rent the restaurant's current site at On Lan Street back then and Kanesawa liked the venue after viewing it. The restaurant opened in late 2018, and a MICHELIN star recognition followed just one year later. 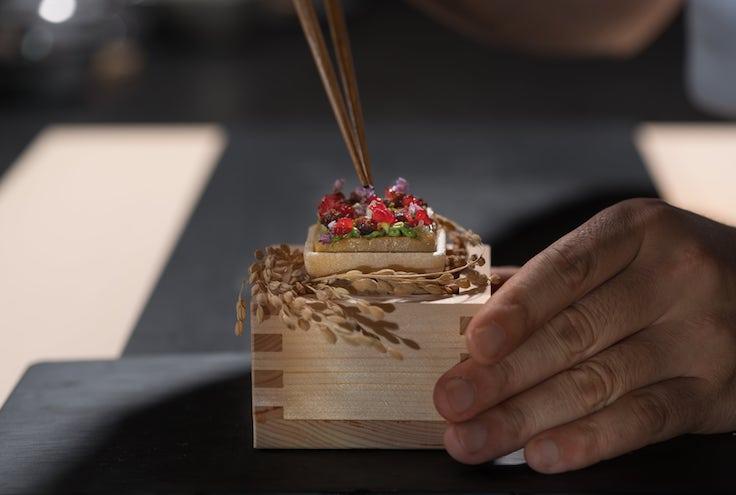 A cuisine with personality

The decision to specialise in kappou cuisine at Ryota Kappou Modern was a "simple" one, said Kanesawa: "Because that is what my dad does, and I will never forget the way he cooks."

A high-end style of cooking from Osaka, kappou cuisine has a history of over a hundred years and is given the same reverence as kaiseki cuisine. Kappou literally means "to cut and cook" in Japanese and the cuisine emphasises a close relationship between diners and the chef, whose deft movements when preparing the food should be visible from the tables or counter-style dining seats. At Ryota Kappou Modern, Kanesawa also enjoys chatting with his customers during the cooking process.

Several set meals are offered during lunchtime and two during dinner, each one created based on Kanesawa's philosophy of "excellence in simplicity". His signature amadai dish, for instance, is a take on the traditional Japanese pairing of amadai with radish. Kanesawa makes his own dashi from kogomi, a wild fiddlehead fern from Japan, and beetroot juice.Even a seemingly simple serve of rice towards the end of the meal is prepared with great care: to fully bring out its subtle flavour, Kanesawa painstakingly cooks each serve in donabe (earthenware pots) so that he can serve it piping hot to every customer.

For now, the young restaurateur's goal is to get more people to learn about his cuisine. "I hope to have more four-hands dinners with other chefs, so we can learn from each other. My goal is to take my cuisine to the next level."

We invite Kanesawa to share with us his thoughts and emotions when Ryota Kappou Modern received its Michelin star for the very first time in the MICHELIN Guide Hong Kong Macau 2020. 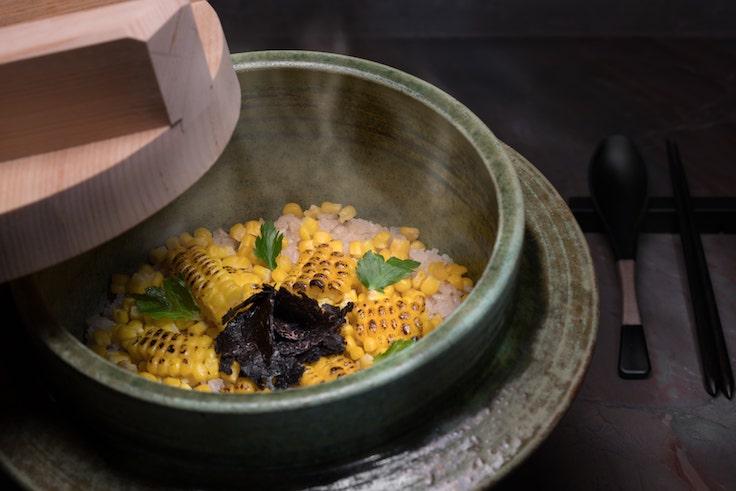 What were you thinking when Ryota Kappou Modern received its first MICHELIN star?
I was extremely happy. I've been longing to clinch a star. Many of my friends’ restaurants are recognised by the MICHELIN Guide. So when we got one star, I was relieved that it was finally my turn.

How did you celebrate?
I had a fever the next day — I think it was due to the stress of anticipation and the excitement after the results were announced. It was my first year participating in the launch of the MICHELIN Guide. Although many said that if you receive an invitation, it means your restaurant will get a star, but some chefs told me that this is not necessarily true, which made me very anxious before receiving the star. After I recovered from my fever, I had my comfort food, Osaka-style okonomiyaki, with my team, as a celebration.

How has the MICHELIN star impacted you so far?
We will continue to strive for progress in all aspects.

Do you have any advice for young chefs aiming for MICHELIN stars?
Stay hungry. If you want something, act on it. You must keep learning and never stop.

This story is written by Mandy Li and translated by Tang Jie. Click here to read the original article.
Advertisement