What is it
The term ‘amuse bouche’ is French for mouth amuser. These are complementary little bites that chefs send to diners at the start of their dining experience and can range from just one dish to as many as six or seven.

The advantages of having these morsels are plenty: guests get pampered while experiencing the chef’s culinary vocabulary as much as the kitchens get a gastronomic sketch pad to play with techniques and flavours without feeling obliged to include the items in the fixed menu.

The History of It
The amuse bouche came into being around the time when French chefs developed ‘nouvelle cuisine’ – the era where fine dining fare evolved into smaller, daintier dishes. The focus was on tasting the natural flavours of fresh produce while moving away from the traditional heavy sauces and marinades. 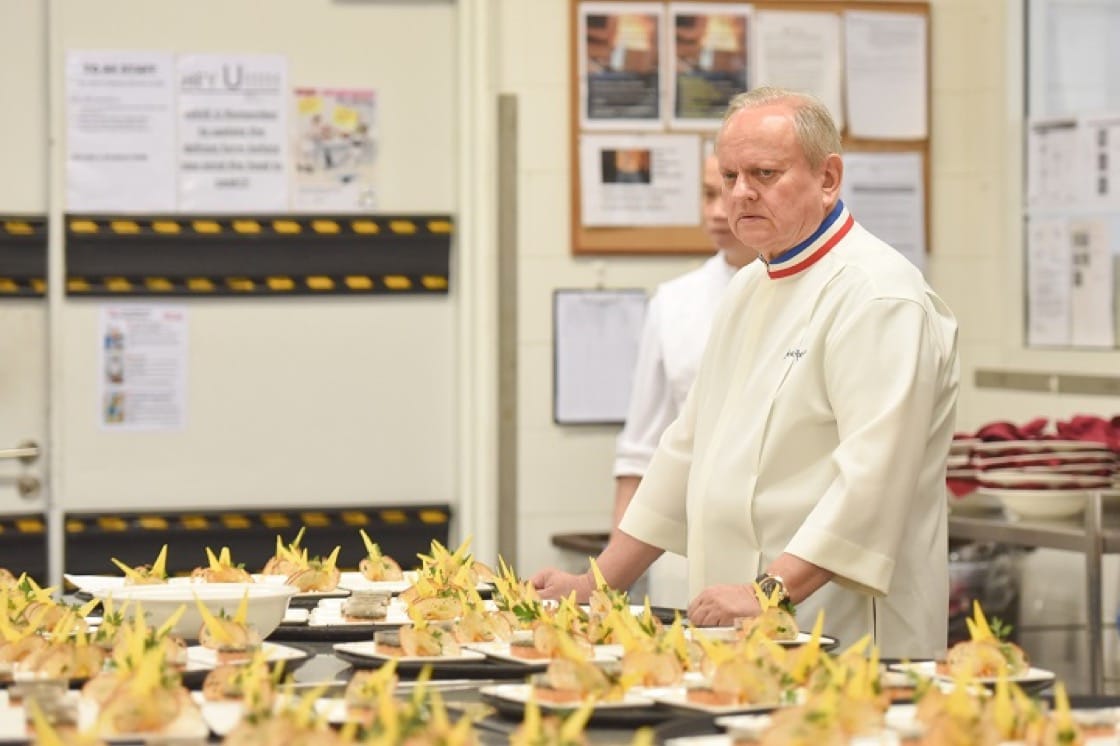 Chef Joel Robuchon scans through rows of amuse bouche.
It was also a time when chefs begun being competitive, and each strived to outdo each other in creativity. What started from something as simple as just olives on a small plate soon turned into minuscule bites that showcase several elements and techniques in just a single serve.

But that didn’t mean they were always around. "Amuses became unfashionable during the late '80s, but recently they've returned to fashion," says chef Jean Joho of one-Michelin-starred restaurant Everest to USA Today. "I'm a fan of serving them because it's a way of being creative."
Advertisement
Advertisement
Today, the amuse bouches at fine dining restaurant can range from the slightly more traditional broths or mousses in an espresso cup to creative plays that deploy all manner of props: from placing the pretty morsels on foraged mosses as seen in Nordic restaurants like Geranium and Maaemo to olive ice cream globules hanging off an actual miniature olive tree at Spain’s El Celler de Can Roca.

The science behind it
While chefs use it as an opportunity to showcase their culinary finesse, serving up such bold flavours early into the meal has its merits: it can increase the appetite while promoting feelings of satiety – especially if the chef whips up morsels packed with umami goodness.

One study done by The American Journal of Clinical Nutrition showed that it induced the production of saliva, which in turn aids in tasting the food that’s to follow.

A day out on the beach with a good friend turned into an inspired creation by this French chef for the 2018 MICHELIN guide Hong Kong and Macau gala dinner.

6 Must-Haves For A Perfect Picnic Basket

Channel your inner Edouard Manet and recreate a picnic that rivals the idyllic meal in his famous painting Le Déjeuner sur l'herbe.

8 Types Of French Pastries To Know

Magic happens when the French mix flour, water and butter together.