Gwo zaa is an old-school Cantonese snack that chefs nowadays might not have heard of. Even the ones who know about it and the cooking process are likely to fall short when it comes to replicating the dish at its best.

Crunchy on the exterior, and smooth and melty like tofu inside, it is essentially a piece of deep-fried broth-based custard in a diamond shape. Its origin is detailed in a book written by the late food writers Chan Mong Yan and Pearl Kong Chen, the latter is the granddaughter of illustrious gourmand Jiang Taishi. Jiang was a longtime representative for British and American tobacco companies in Southern China and deep-fried custard was one of the staples at his home. 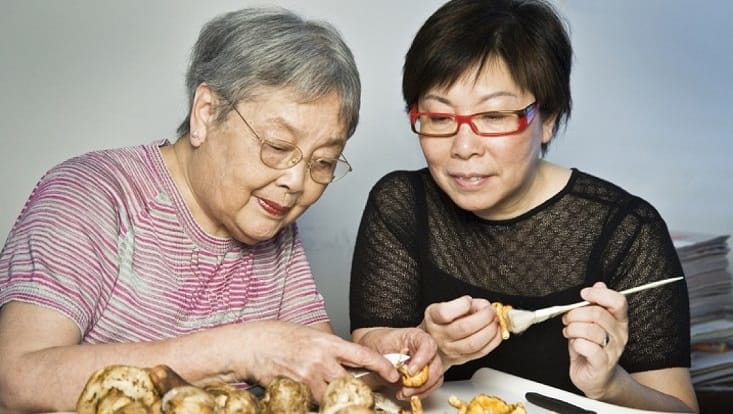 Arriving from the North

In their book on traditional Cantonese cuisine, it is deduced that gwo zaa was derived from a northern dessert called guo zha（鍋炸）made with flour, egg, sugar and water. The mixture was cooked to form a cake, which was then cooled, sliced and deep-fried before serving. There is a dish also called guo zha（餎餷）in a branch of Qing imperial cuisine known as Li’s family cuisine. In that rendition, the farmers of Hebei cooled pea purée on a steel panel in the morning, and later sliced and deep-fried it. Shaped like dried tofu, it was a classic street food in Beijing.

Jiang Taishi was inspired by the second version of guo zha when he tasted it on a trip to the imperial capital. When he returned to the south, he tried to adapt it to match the Cantonese palate. He changed the recipe from sweet to savoury, ordering his family cooks to use new ingredients and techniques to refine the dish. His fried custard eventually became one of the Jiangs’ trademarked delicacies for guests. 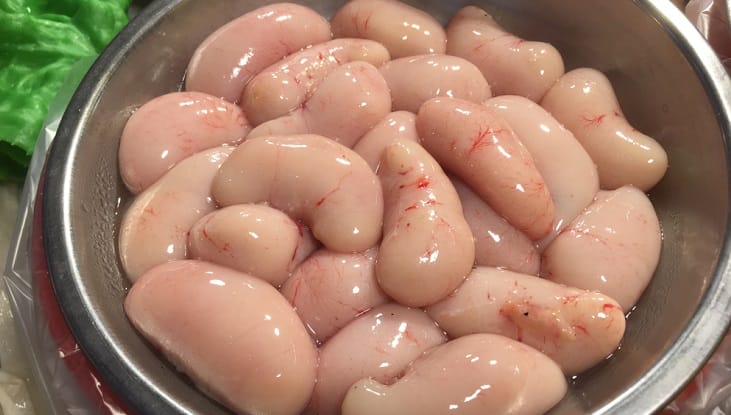 Jiang Taishi’s Fried Custard originally comprises chicken testicles steamed and mashed. They are mixed with a stock of Jinhua cured ham and old chicken, egg, cornstarch and lard before deep-fried.

A Test of Skills

Jiang’s Fried Custard calls for the stock of Jinhua ham and old chicken, which is combined with egg, cornstarch, a little lard, as well as steamed and mashed chicken testicles to form a paste.

Mixing all the ingredients properly is the most critical step. The combined paste needs to pass through a strainer to make sure it is smooth. Another key element is controlling the fire. The wok needs to be first heated on high. The heat is turned down to medium when oil goes in, and to low when the custard is poured into the wok. Meanwhile, the cook must keep stirring and taking the wok off the heat to avoid burning the custard. Meanwhile, if the temperature is too low, the custard would not firm up like it should. To ensure it thickens slowly to the right consistency, a lot of skill and experience is involved.

When the custard is sufficiently cooked, it is transferred to a tray and refrigerated for six hours until it becomes solid. After that, it is cut into diamond-shaped pieces, coated with corn starch and deep-fried. The amount of corn starch plays a decisive role in determining the texture of the final outcome. Too much of it makes the dish too hard; too little of it makes it difficult for the custard to hold its shape. Other than that, the temperature of the oil should be maintained at 205˚C. Every step counts in making gwo zaa. The know-how comes only with time and practice. The finished dish delights diners with its crunchy surface and ultra-soft centre. The solidified broth quickly dissolves in the mouth and releases a wave of rich umami. 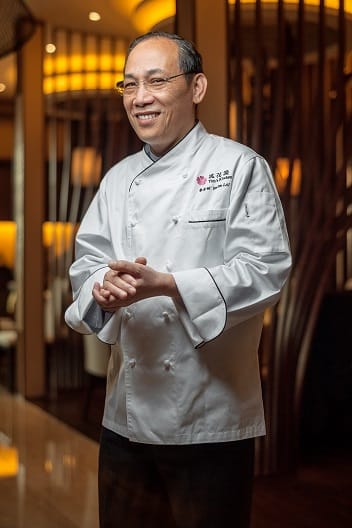 Jiang’s subsequent association with Buddhism propelled him to remove chicken testicle from the fried custard. In the updated recipe, stock becomes the primary flavouring agent. The spread of gwo zaa to the public circle was facilitated by Lee Choi, the last family cook of the Jiangs. Lee worked at the Jiang household for over a decade, witnessing the decline of its fortune. He later left for Hong Kong, working at the home of the city’s governor Rensuke Isogai during the Japanese Occupation era.

After that, he moved to the kitchen of a private club in Shek Tong Tsui, whose membership comprised the richest and highest profile personnel such as Lee Shau Kee, former chairman of Henderson Land Development. Through the introduction of Hang Seng Bank’s founder Ho Tim, he ended up cooking at the bank’s banquet hall The Penthouse.

Lee had a hand in training a bunch of chefs who master Jiang Taishi’s most famous dishes. His nephews Lee Shing and apprentices Lee Yuk Lam and Lai Yau Tim all made a name for themselves. Lee Yuk Lam is currently the executive chef of Cuisine Cuisine in Central. Lai owns and cooks for Tim’s Kitchen, which has a MICHELIN Plate. This new generation shoulders the mission to carry on the legacy of deep-fried custard and other sophisticated creations from Jiang’s cuisine.

The recipe book by Kong gives average home cooks a chance to try their hand at this complex dish. She even raises the possibility to replace chicken testicles with sea urchin, an ingredient more in line with the taste of contemporary diners. This new iteration might not fully match up to the traditional chicken testicle gwo zaa, but it does help to promote this Cantonese classic to a new audience and let more people fall in love with it.