The exceptional diversity of Slovenian wines

Located at the same latitude as France's Burgundy winegrowing region, Slovenia's vineyards boast great variety in terms both of climate and soil. The three main wine-producing regions and the nine protected designations of origin are planted with more than 50 different grape types, a large proportion of which are indigenous. Such an array means the country can produce all kinds and all colours of wine: sparkling, dry whites or more fruity, orange wines, light reds or more tannic. There are even sweet wines. This variety goes hand in hand with high quality standards : the most prestigious international wine rankings include Slovenian wines in their lists every year. In addition, more and more fine dining restaurants are serving wines from Slovenian vineyards, with ultra-local selections. Furthermore, these include a wealth of natural and biodynamic wines.

Slovenian wine is sufficiently refined to be the ideal partner for even the finest meal. Here are two restaurants from the Michelin selection that do interesting work with wine and are not afraid to propose regional pairings to enhance their cuisine. 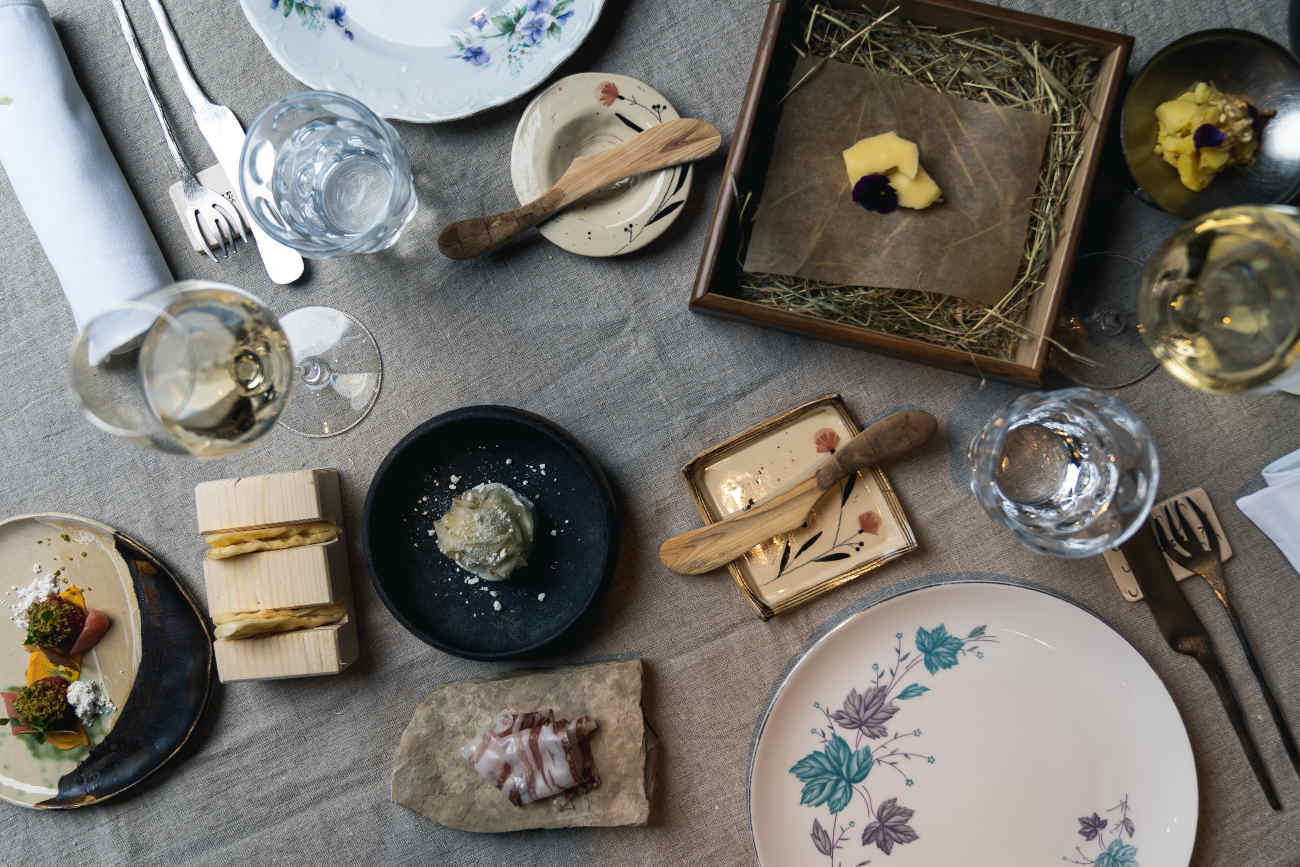 The village of Šentjanž is set in the hilly Dolenjska (Lower Carniola) region, a landscape of fields, forests and vineyards. This picture-perfect setting is home to Gostilna Repovž, awarded a Bib Gourmand in 2021. Historically a hub of social gathering, the restaurant is said to have existed for over 300 years ; some even claim that it was built before the church! You will immediately feel at ease in its warm and neat decor, where tradition is a source of pride.

The Repovž family hails from the region and has been at the helm of this institution for several generations. Today, the adorable Grega runs operations, while also presiding over the incredible cellar with its lineup of more than 300 wines, a veritable library of Dolenjska and Posavje wines. After receiving a solid schooling in oenology, he was the first to draw attention to these neglected local wines, and in this way played a role in their renaissance.

"A few years ago, Dolenjska wines were struggling to exist in the Slovenian wine landscape. I wanted to bring them to the fore. The work of these winegrowers is a sincere expression of our land". A lot of these wines are made with modra frankinja (called Blaufränkisch in Austria), a grape variety that is omnipresent in the region and has become Grega's favourite : "In my cellar, I think I have almost every one of the country's Blaufränkisch. This means I can assess our level of expertise".

By serving these wines in his restaurant, Grega has put a new dynamic in motion. In this respect, his relationship with François Botton of Domaine Slapšak is emblematic. Botton, a young winemaker originally from France's Champagne region and now based a few kilometres from Gostilna Repovž, produces interesting sparkling wines according to traditional methods. Last summer, Domaine Slapšak temporarily hosted Grega's restaurant while it was being refurbished. "For us, it was a great opportunity to showcase our wines. Grega's customers trust him implicitly and they are right to do so," says François. 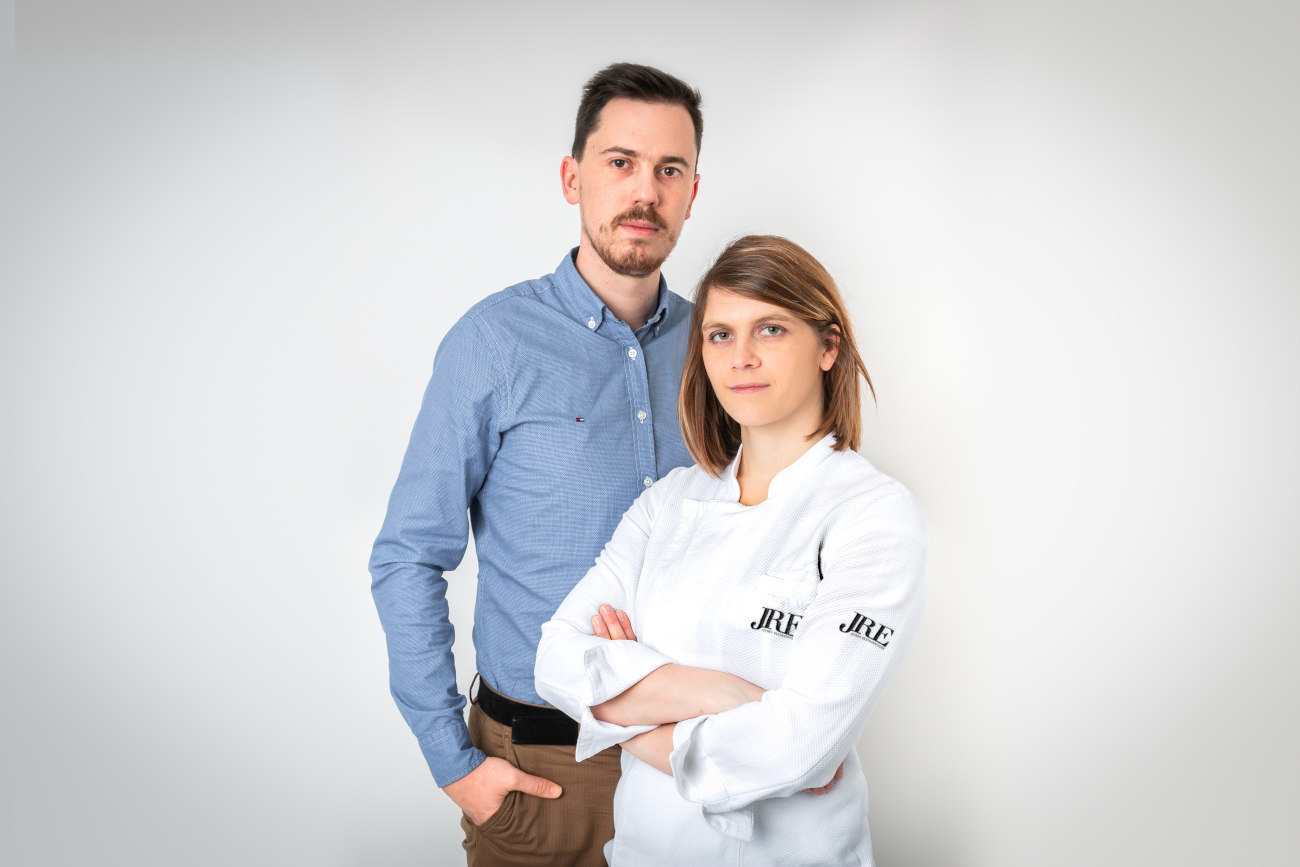 This philosophy is reflected in Gostilna Repovž's cuisine, which is superbly orchestrated by chef Metka Repovž and sous-chef Sabina Repovž (Grega's mother and wife, respectively). While a significant number of the vegetables used in the restaurant are grown in their own garden, the family also has partnerships with some 15 local and organic producers : their eggs, flour, cheese, meat and cured meats all come from the surrounding area. Portraits of these partners are displayed on the walls of the restaurant, in recognition of the fact that Gostilna Repovž is proud to be part of a close-knit community.

Some 50km to the east, leaving Dolenjska for Posavje (or Lower Sava Valley), is Ošterija Debeluh. This restaurant towards the south-eastern tip of the country, just a few kilometres from the Croatian border, also promises an exceptional dining experience. Ošterija Debeluh – or "Fat Man's Inn" – is located in the historical town of Brežice, which has a magnificent Renaissance castle. This charming place is where Jure Tomič, director and chef of the restaurant, was born in 1981. His backstory is impressive: aged just 20 years old when he took the reins of this local institution, he proceeded to elevate it to new heights of haute cuisine. 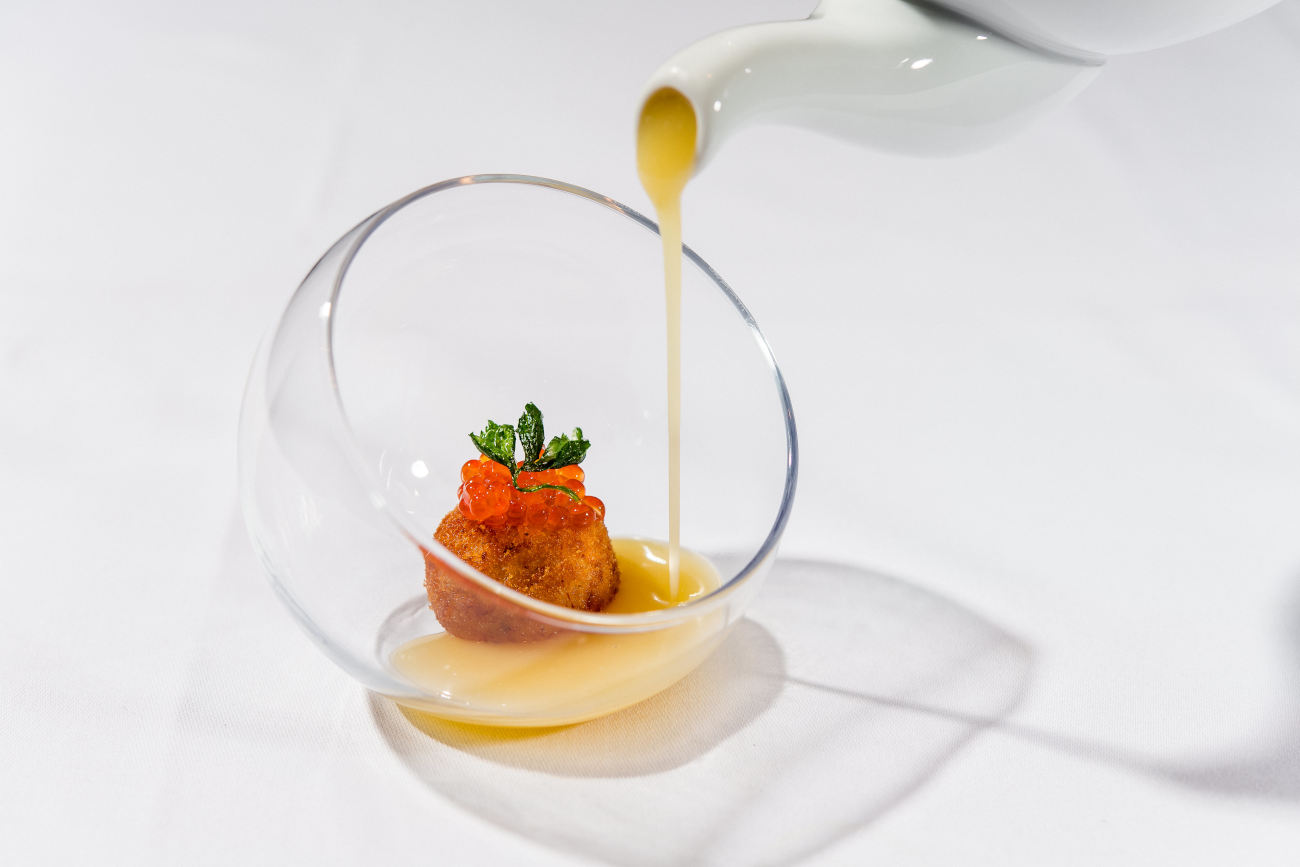 The inviting decor is in keeping with the overall atmosphere, old and new blending harmoniously – fittingly enough for an establishment that may have been around for over 150 years but still wishes to keep up with the times. The extension offers a contemporary space that is more open to the outside and boasts a lovely terrace in summer, a setting that Jure Tomič is especially fond of.

As for Tomič's love of cooking, it was passed on to him by his family during his childhood. "I think I became a chef so that I'd never forget the sensations I had then," he says with a touch of nostalgia. It is hardly surprising to learn that he wanted to involve his whole family in the Debeluh adventure : his mother, father and brother helped him to build and then grow his project. 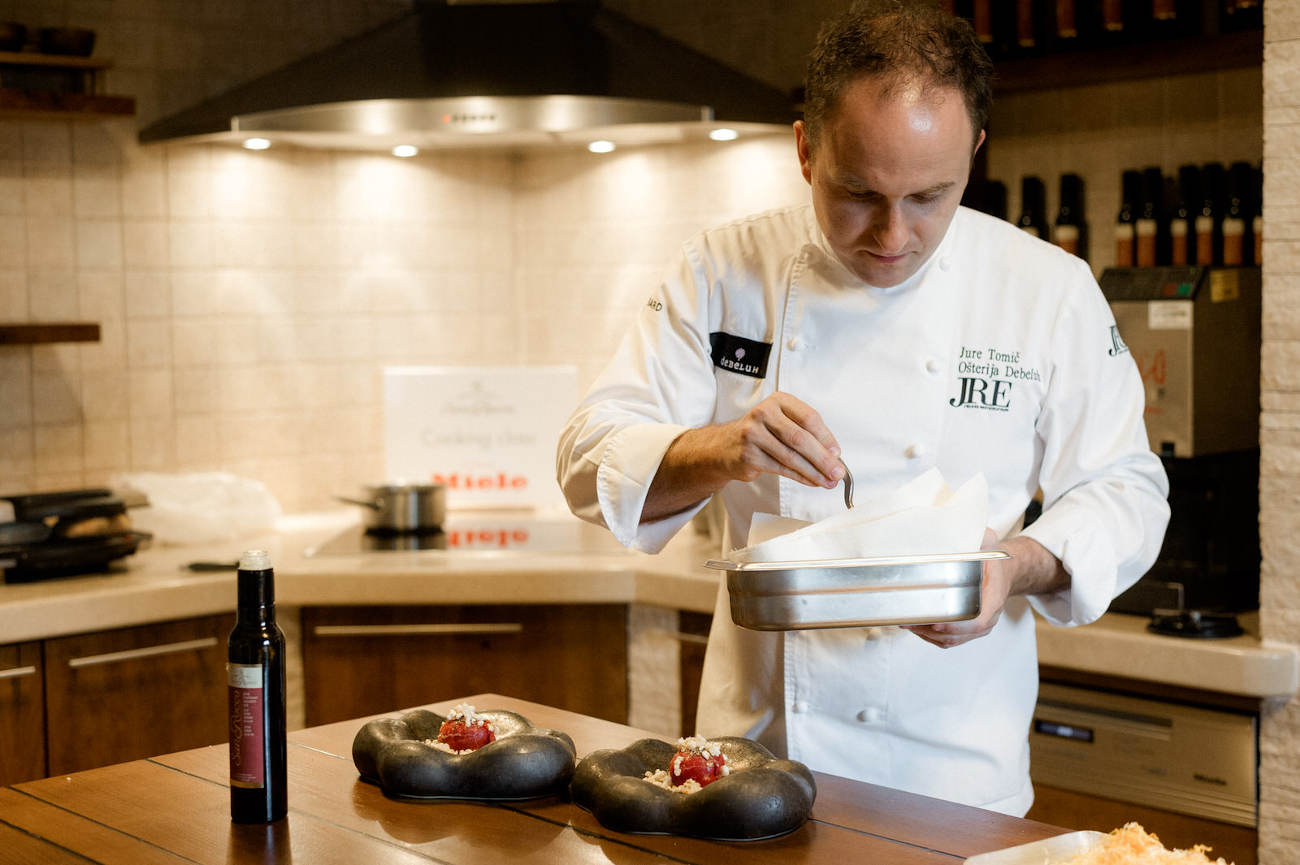 After 19 years running his restaurant, he is still as passionate as ever about cooking. "I'm always on the lookout for new produce, innovative techniques and original ways of preparing food," he tells us. And he will happily travel around Europe in his quest to nourish his creativity. His mentors are Pierre Gagnaire and Heinz Beck, "because they know how to do everything". Jure jumps at new challenges : he is particularly proud of the World Pasta Champion title he won in 2016. His thirst for innovation is also expressed in wine, the real forte of his restaurant. His knowledge of Slovenia's vineyards is almost encyclopaedic, as borne out by his victory in the competition for the country's best sommelier. Nearly 75% of the 480 wines on his list are Slovenian, and he has a particular liking for wines from his region, Posavje.

"I have a preference for biodynamic wines, but I make a point of choosing only batches that are on point," he specifies. The special relationship he has established with the winemakers of Keltis is another proof of his outward-looking nature. This regional producer is renowned for their original and sometimes astonishing wines, which are highly sought after in the specialist bars of New York or London. This unwavering commitment does not prevent Jure from offering an attractive selection of foreign wines, from great French champagnes to super Tuscan bottles. 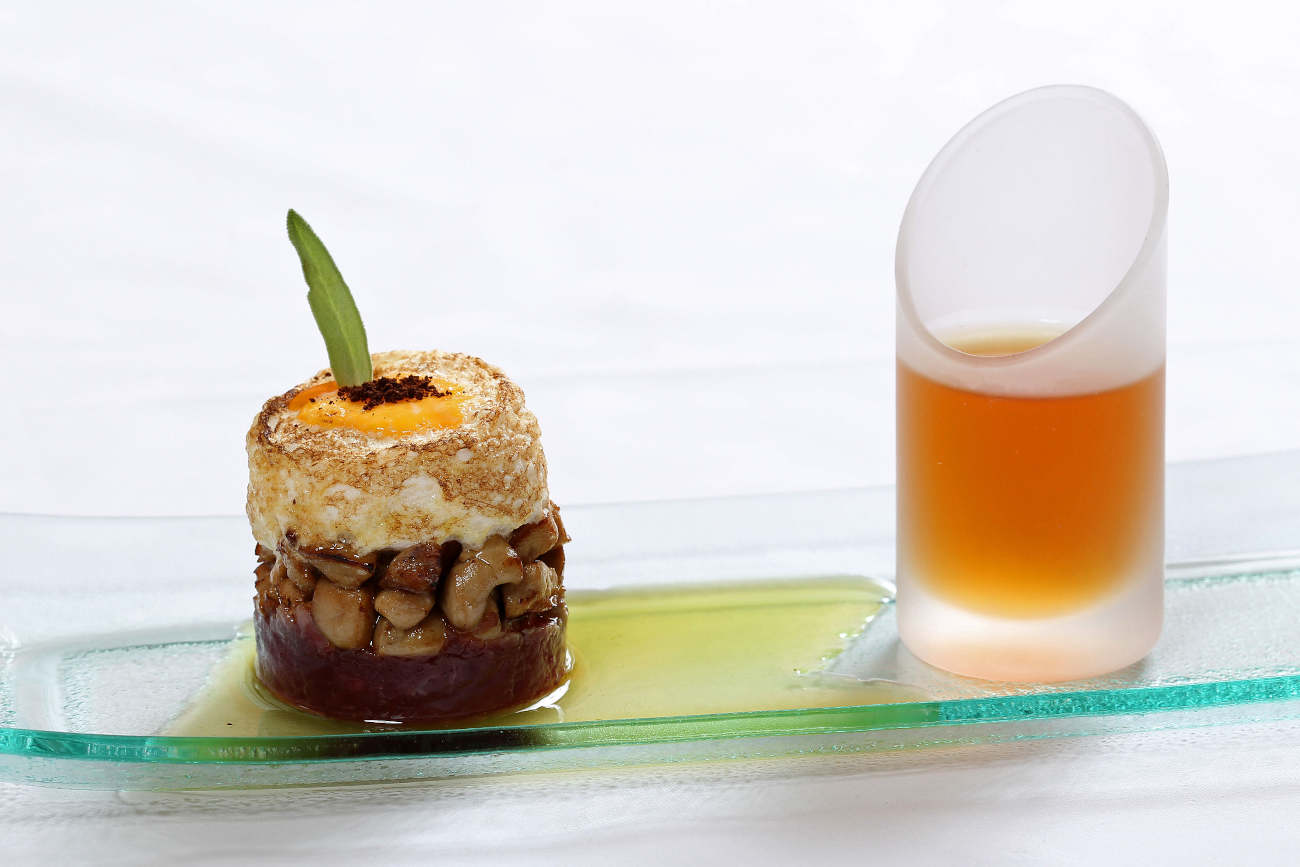 The chef's recipes are also an ode to the local land and its produce, for instance, smoked trout with fish roe, poached pear and horseradish, or ravioli filled with local goat's cheese, accompanied by oil and pumpkin flowers. All his suppliers operate in a close radius – which includes part of Croatia, only 8km away – some independent, others grouped into farmers' cooperatives. Firmly grounded in the local area, Jure Tomič can remain true to his roots.