We Got Glammed Up for the Exclusive, Invitation-Only Unveiling of the New Great Britain & Ireland Michelin Stars

We had front row seats for the unveiling of the new Michelin Stars at the launch of the Michelin Guide Great Britain & Ireland 2020, held at the Hurlingham Club in Fulham on Monday 7th October 2019.

Excitement was in the air as guests were ushered through an entrance fittingly bedecked with stars into the glamorous, glass-domed Palm Court, where Starred Chefs, soon-to-be-Starred-Chefs and their partners mingled with bloggers, journalists and industry greats. 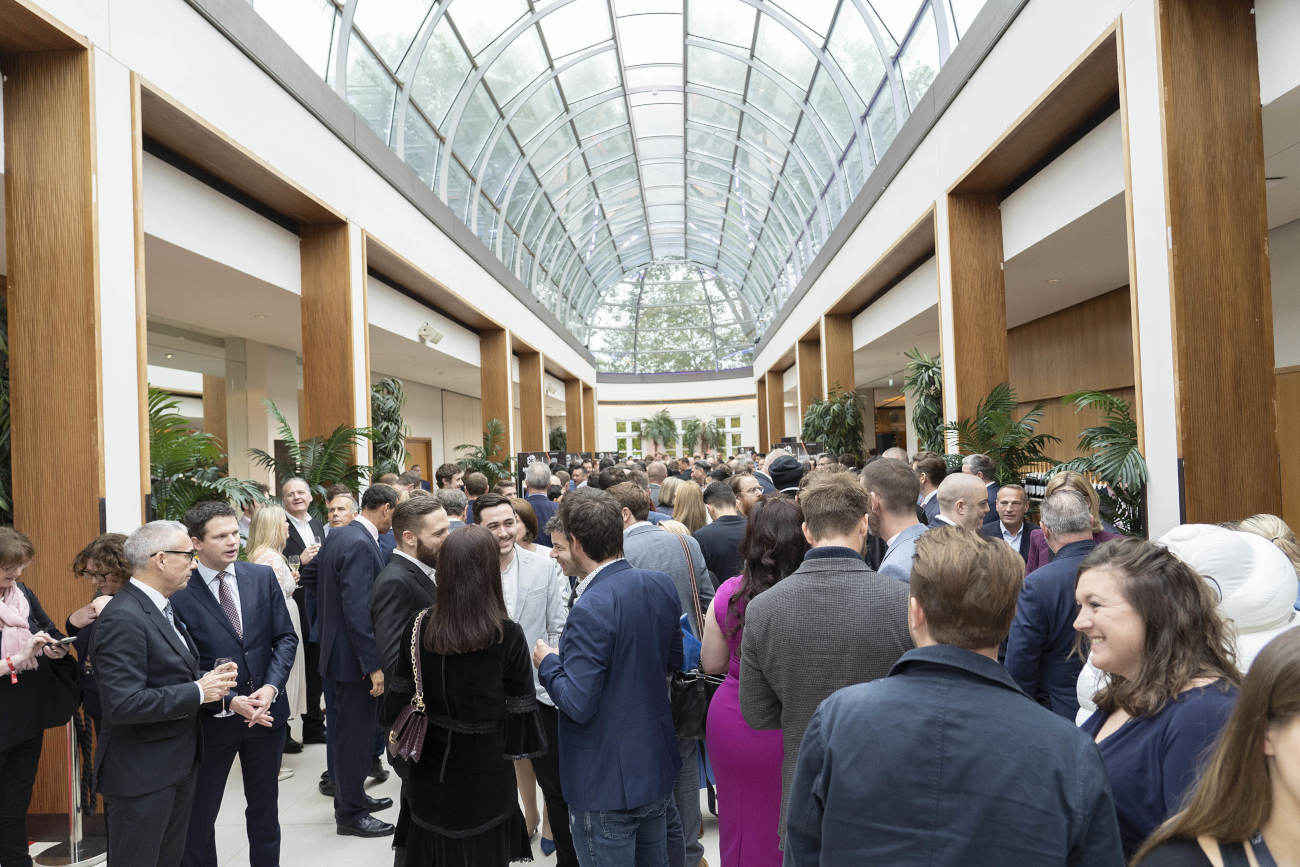 A seemingly endless stream of enthusiastic hospitality students from Westminster Kingsway College supplied guests with Nyetimber sparkling wine and moreish Valrhona chocolates, as old friends and workmates were reacquainted, and Bibendum – the ever smiling Michelin Man – did the rounds.

We’d seen on Twitter that many chefs had arranged to meet for lunch and drinks before the event and they now chatted in animated huddles; the room abuzz with expectation. Who would be awarded a Michelin Star? Would anyone be receiving Two Stars? Or perhaps even the ultimate accolade of Three Michelin Stars?

Soon everyone was guided through to take their seats in the auditorium, ready for the big reveal – many pausing to greet their fellow chefs en route, with the usual dash for the seats at the back from the rowdier groups. Over 450 chefs, their teams and their families sat shoulder to shoulder, the room packed to capacity.

Host for the night was British racing car driver and keen foodie Amanda Stretton, who opened the ceremony along with Gwendal Poullennec, International Director of the Michelin Guides, and Chef Raymond Blanc OBE. Raymond then made a passionate and inspiring speech, emphasising how experienced chefs are in the privileged position of being able pass on their knowledge to the next generation – who, while taking on board this expertise, are reinventing the industry with a newfound respect for social and natural responsibilities. 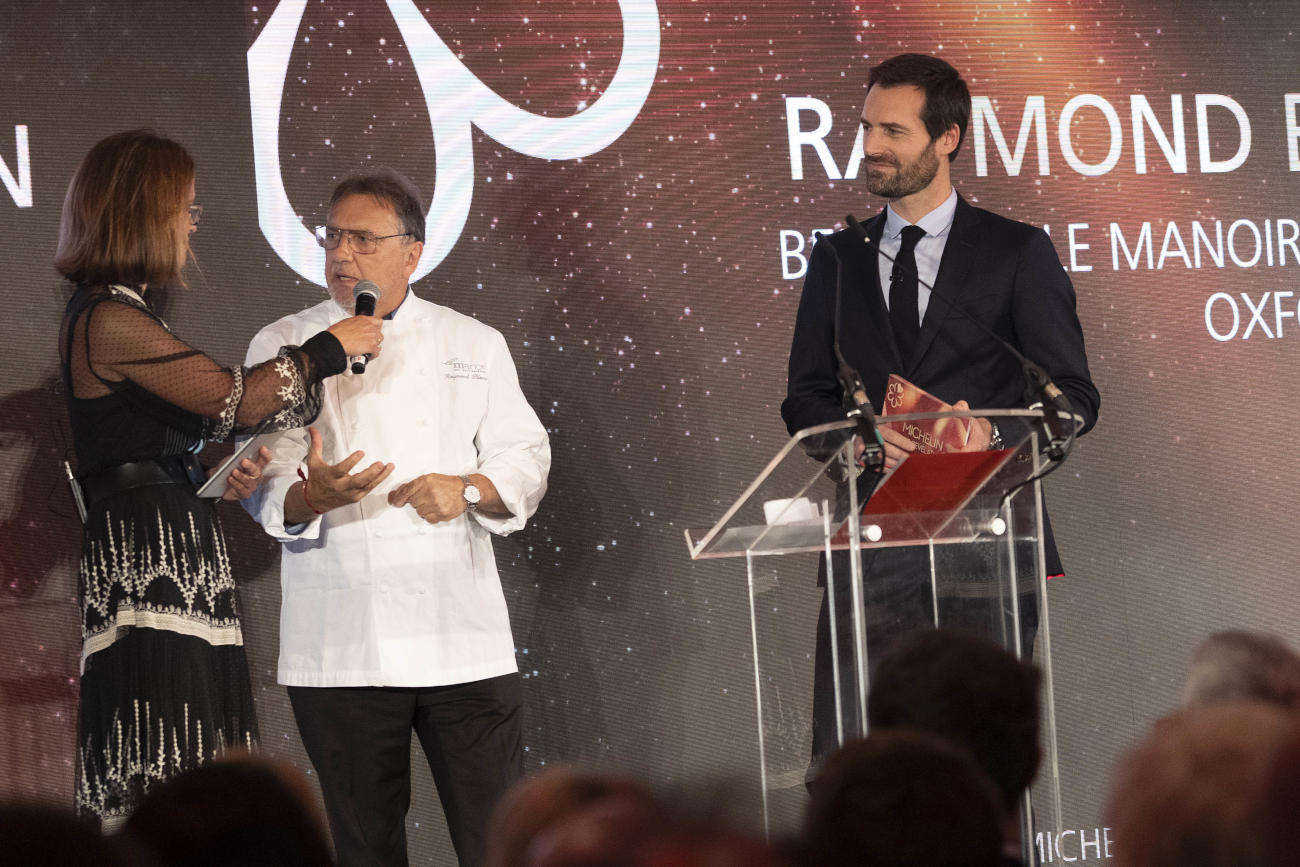 Up first in the announcements were the three Michelin Awards for Sustainability (sponsored by UK Hospitality), Sommelier (sponsored by Æcorn Aperitifs) and Service – the winners receiving their awards with great pride. Next came the One Stars, where reactions from the chefs on stage ranged from pure shock and being at a loss for words to those stirred up with emotion and making the most of their moment in the spotlight.

When it came to the Two and Three Stars a palpable sense of anticipation came over the room, as people held their breath waiting for each name to be revealed. The letters teasingly dropped onto the screen a few at a time and there were tense moments as people tried to piece them together – followed by whoops and an eruption of applause when the full name of each restaurant was finally disclosed.

One of the best reactions of the night was from the team at the Greenhouse in Dublin, who roared in excitement when they realised they been promoted to Two Michelin Stars. Head Chef Mickael Viljanen embraced Raymond Blanc so enthusiastically that he knocked him off his feet – and he couldn’t wait to put on his Star emblazoned Bragard jacket live on stage.

The most heartfelt reactions, however, came from a tearful Endo Kazutoshi who was truly humbled to receive his first Michelin Star; from Niall Keating, who claimed his second within 3 years and was so emotional he could only just speak; and from Jordan Bailey and his stunned partner Majken, who entered the guide for the first time with Two Stars. Everyone could really feel how much it meant to them and couldn’t help sharing their joy. 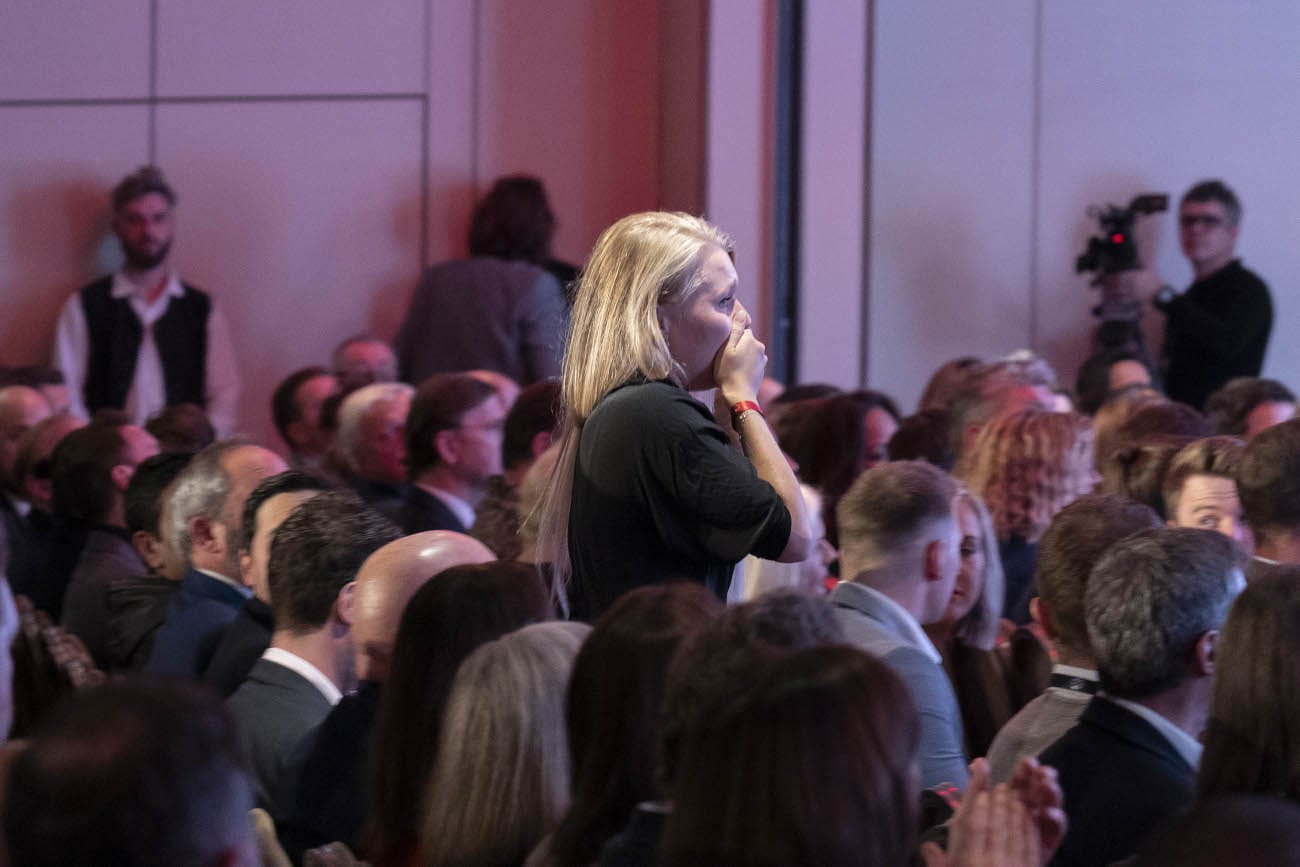 The high-spirited crowd then made their way out of the auditorium and back into Palm Court, where the celebrations began in earnest, with oysters, sliders, luscious desserts and more from Classic Fine Foods, along with Petrossian caviar and SIBA craft beers.

The camaraderie among the chefs was clear to see, with congratulatory handshakes and backslaps all round. As Raymond Blanc said during the award ceremony, this is an industry which is ‘all about people’ – and these are the people who know first-hand the passion and the perseverance it takes to run a Michelin-Starred kitchen.

Monsieur Blanc was his amiable self, chatting and posing for photos, and Bibendum also worked the room, stopping for selfies with some of the Starred chefs. Everyone present was given a copy of the 'little red book' and pages were quickly thumbed to see what the Michelin Inspectors had to say about the best places to eat in Great Britain and Ireland.

Then there was just time for one last hug between friends before taxis whisked everyone off into the night.

Goodbye Bibendum, it’s been a blast. See you again next year!