Citizens of New York, behold: there’s a fancy new bi-level restaurant from Joël Robuchon veteran chef Alain Verzeroli opening in Midtown Manhattan today. Le Jardinier, located on the corner of East 53rd Street and Lexington Avenue, puts a laser focus on vegetables, making this a bit of a diamond in the Midtown-dining-scape rough.

Le Jardinier is the first restaurant for Verzeroli, who was director of culinary operations at Château Restaurant Joël Robuchon in Tokyo, which earned three MICHELIN stars for 11 years in a row. Designed by Joseph Dirand, the space houses 62 seats, an indoor garden, green marble walls and floor-to-ceiling windows. As for the food, “I created the concept for Le Jardinier based upon the way I like to eat and what I’ve seen diners gravitating towards—more vegetable-focused, with smaller portions of protein,” says Verzeroli. “I wanted the menu to be light and refined, but also unpretentious and approachable.” 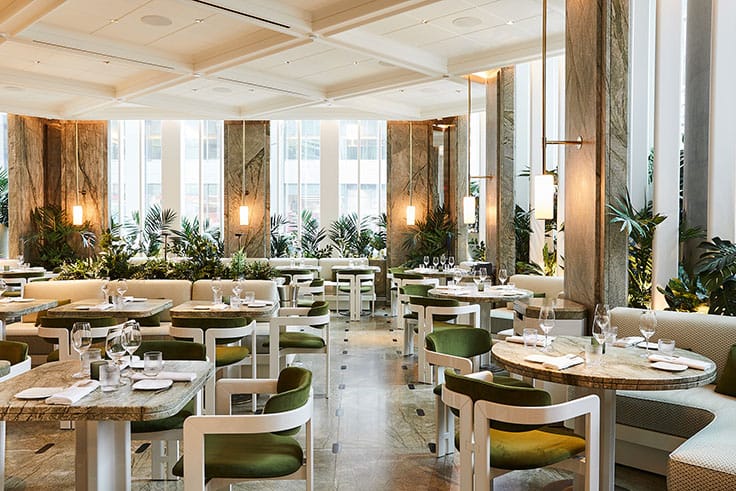 The aforementioned vegetable-driven menu includes dishes like heirloom tomatoes paired with stone fruits and burrata; Montauk fluke crudo with Persian cucumber and crispy black rice; and Dover sole for two with lemongrass and leeks. Desserts, by pastry chef Salvatore Martone (of two-MICHELIN-starred L’Atelier de Joël Robuchon New York), include lemon meringue tart with citrus marmalade and warm rhubarb pie with rhubarb buttermilk sherbet. "He specifically focuses both on organic ingredients and more 'organic' presentations," adds Verzeroli. "What’s most important is clarity of flavors—for example, if it’s a strawberry dessert, all of the preparations of that ingredient and the additional components should work to heighten and accentuate the purest strawberry flavor." As a bonus, five out of the seven desserts are gluten-free.

There’s also an entirely gluten-free bread program at Le Jardinier by master baker Tetsuya Yamaguchi (also of L’Atelier de Joël Robuchon New York). It’s a first for him—it took five months to recipe testing to perfect a unique bread basket. The ancient grain baguette is a mixture of buckwheat, brown rice flour, white sorghum, teff and rice flour, while the mini Parker House rolls consist of Japanese rice flour and white sorghum. “I use the Japanese [flour] because it’s different than the US rice flour—it’s very very fine and the method to make the flour is very different,” Yamaguchi says. “Japan is a rice culture rather than wheat—they study how to work with rice. It gives it an airy texture—not so chewy—and makes the bread moist and fluffy.” 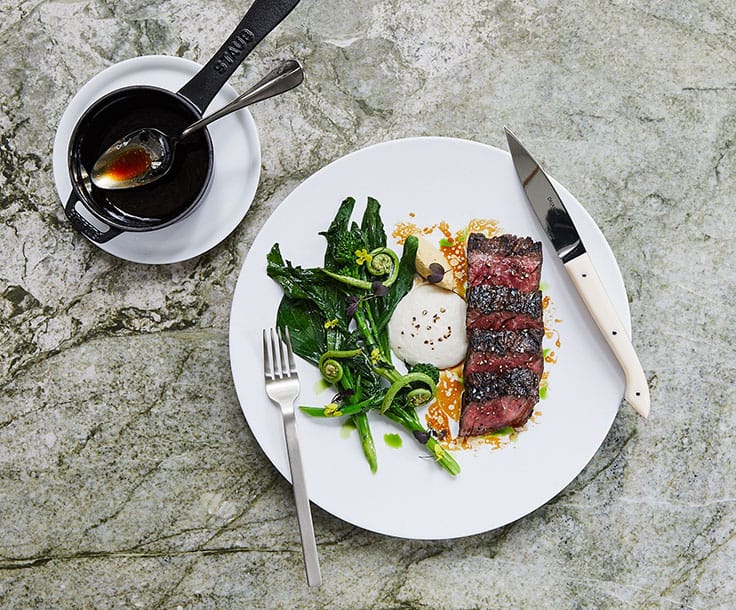 Originally, the second floor of the space was supposed to house chef Robuchon’s iconic and eponymous fine-dining restaurant. “The concepts have changed completely over the past year,” says Verzeroli. “Upon chef Robuchon’s passing last August, we made the decision not to move forward with opening his Joël Robuchon Restaurant. This was both out of respect to chef Robuchon as well as looking at the current New York dining scene and wanting to offer an elevated experience, but at a slightly lower price point than that concept commands.” The second level will be home to the contemporary French-meets-Japanese restaurant Shun, inspired by Verzeroli’s years of living in Tokyo, slated to open in June. “Shun is the Japanese philosophy that each food should only be eaten in its proper season, at the peak of freshness,” he adds. “Le Jardinier is a bit more casual, while Shun will be fine dining.”