8 Things Every Diner Should Know About Truffles

There are more to truffles than their astounding price tag, we check in with chefs from Singapore's Michelin-starred restaurants and French truffle producer Plantin on how to get the most out of the coveted 'diamonds of the kitchen'

Referred to as the ‘diamond of the kitchen’ by French epicurean Brillat-Savarin, truffles are the prized highlight of many a dinner menu. But beyond their famously earthy, pungent aromas, these little nuggets of fungi are also one of the most expensive delicacies in the world, fetching upwards of S$4,000 per pound. Here are eight impressive facts to know about them. 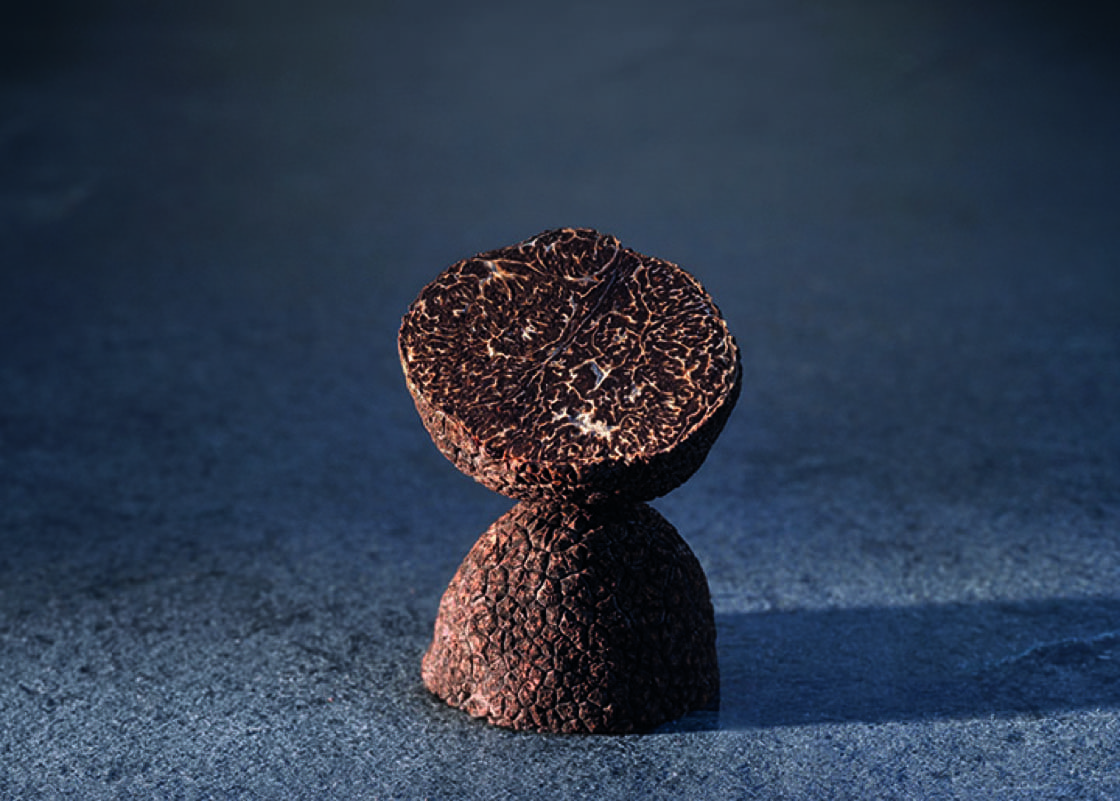 They are rare for good reason
Truffles are are a type of mushroom that grow on the roots of trees, typically oak, hazel, poplar and beech trees. Due to mycorrhizal - the symbiotic relationship between fungus and plant roots - truffles can’t risk outcompeting its host or the truffles will die (‘myco’ means fungus in Greek, and ‘rhiza’ means root). Plus, truffles are finicky organisms, and grow only when the pH, moisture and mineral levels of a soil are exactly as they prefer.

Black truffles can be cultivated on truffières in France (orchards with truffle spores), but even under ‘perfect’ truffle-sprouting circumstances, their presence can be pretty sporadic. On top of that, you have to wait a few years after priming a tree for its roots to bear truffles.

The truffière of French producer Plantin, based in the south of France. Photo: Plantin

There are over a hundred different varieties of truffles
Truffles can be found in various regions across southern Europe, from France, to Spain and Italy and they come in more than a hundred different varieties. But here’s the catch: not all of them are edible. Historical records show that truffles have attracted culinary interest since the times of the Greeks and the Romans, when the production of black truffles (tuber melanosporum) was over a thousand tons per year. Today, only 40 to 90 tons are harvested per year globally, depending on weather conditions. In France, 80 per cent of truffle production is concentrated in southeastern part of the country. In Vaucluse in Provence, the country’s top truffle region, black truffles are harvested from November to March and white truffles (tuber magnatum pico) are gathered between October and December, and more than a ton of truffles can be sold in one day. 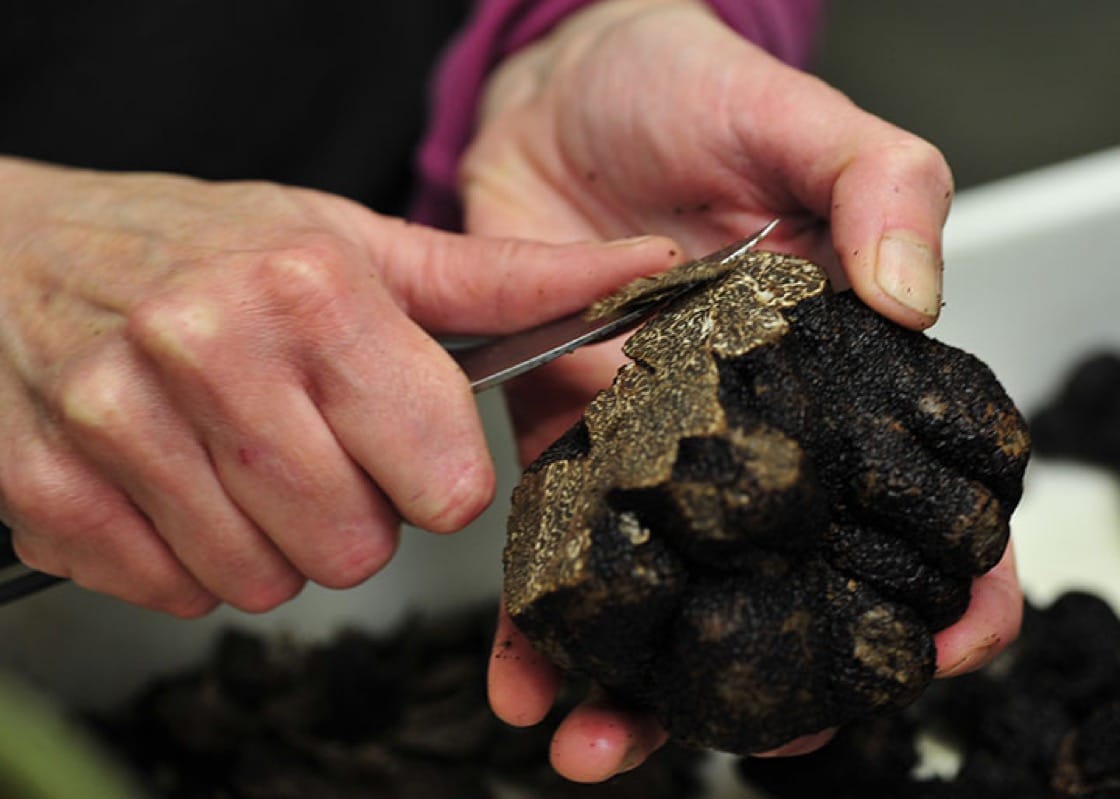 Don’t go hunting without a four-legged companion
Pigs used to be the preferred companions for truffle hunters, but some countries, like Italy, have since banned the practice as the pigs’ hooves can damage delicate root systems of truffle-yielding host trees, sometimes permanently. Female pigs are particularly adept at uncovering truffles, as the truffles' pungent aromas contain a compound chemically similar to androstenol, the most prominent sex pheromone in a boar’s saliva. You could say they literally lust after truffles - but this means they are also more likely to quickly gobble up each valuable find. Today, dogs are more commonly used as their olfactory powers measure somewhere between 10,000 to 100,000 times that of a human - and they are easier to train.

Chef Jason Tan of one-Michelin-starred Corner House, who was recently in Australia for a truffle-hunting trip, shares: “The dogs are usually fed with with truffle-flavoured biscuits and treats, so that they can identify similar flavours when out truffle-hunting. The truffles can be found surprisingly close to the ground, perhaps at a maximum depth of 3 to 5cm, which the truffle hunter then digs up with small spade, like the ones you use at the beach.”

Want to hunt for truffles purely based on human sight? It's difficult, but not impossible, according to French truffle producer Plantin. Look for the 'brulé' around the tree, an area without any vegetation as though it was burned, or the 'à la mouche" or fly method: as certain species of flies lay their eggs close to truffles, if you perceive flies flying close to the ground, you are more likely to find some truffles there.

(Related: Read what our Michelin inspectors have to say about one-Michelin-starred Corner House) 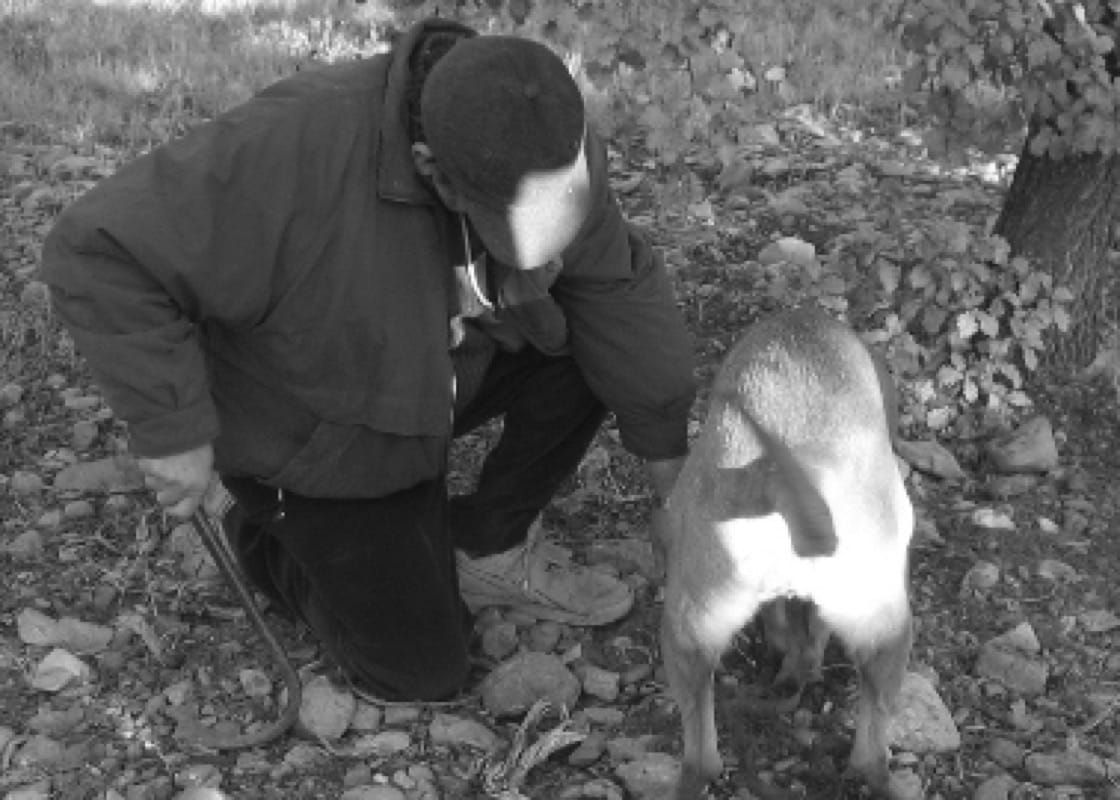 Dogs gradually became favoured over pigs are truffle-hunting companions as they are easier to train. Photo: Plantin

Simple is best when it comes to getting the most out of your truffle
The white truffles from Alba in Italy may be the king of all truffles, but due to their high cost, it’s challenging be as luxurious and generous with your portions as one would like, say top chefs here. For a more pampering touch, go for black truffles such as French Perigord or Australian Manjimup truffles, which can be enjoyed in relatively greater abundance relative to cost. Black truffles on a simple pasta, potato dish or a light country-style soup are the best ways to showcase them, says Kirk Westaway of one-Michelin-starred Jaan. “Use them simply as a finishing touch, don’t overwork them or add them to a heavy broth, as their delicate flavours will be overshone when flavours are too rich.”

(Related: How Jaan became a hotbed for Singapore's most celebrated chefs) 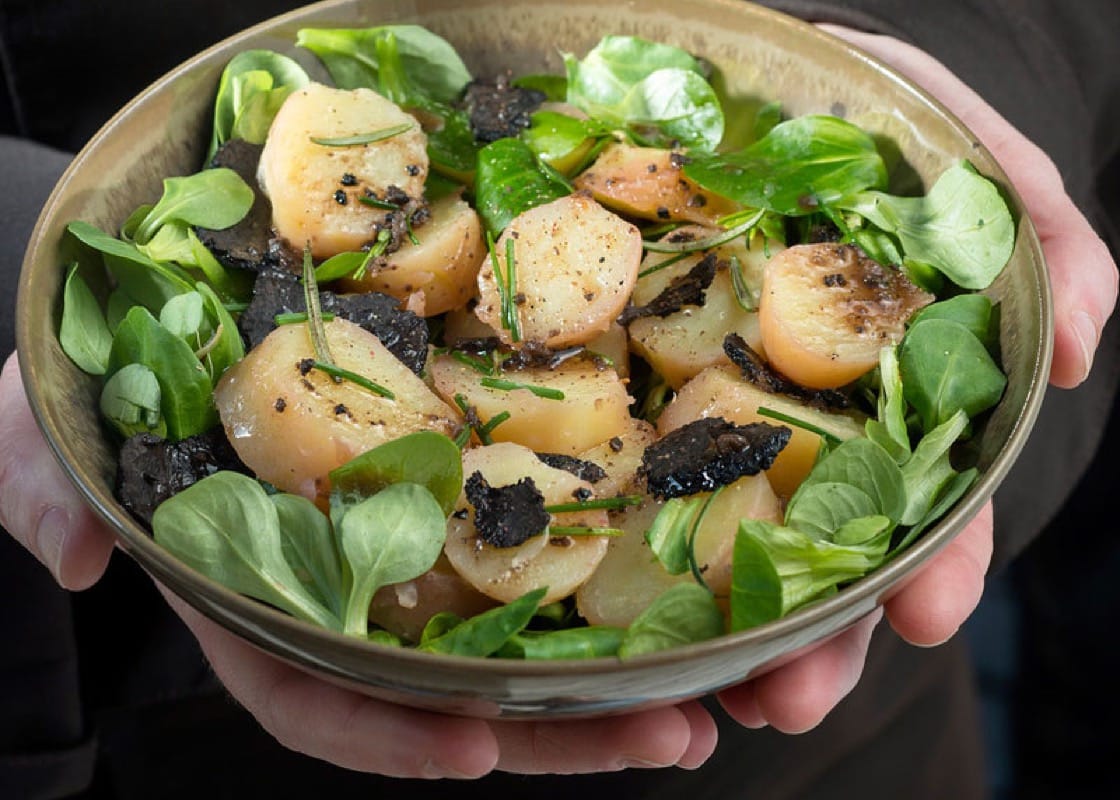 Always keep your truffles in dry storage
Like any produce, truffles are more flavourful the fresher they are, especially if just picked. “You’ve got about a week from purchase to finish using them. In the restaurant, we receive our truffles within 24 hours of harvest and we typically receive a delivery every 3 to 5 days,” says Westaway. “From the time you buy it and the time it reaches the kitchen, a truffle will already lose a few grams from evaporation and condensation, and each gram weighs about 100 dollars. Every minute it is out of the soil, you’re losing money, quality and freshness - it’s a real race against the clock.”

If you can’t finish an entire truffle in one sitting, Westaway recommends storing it by wrapping a paper napkin around each individual truffle, and changing the napkins twice a day. “As you store the truffles, they will emit lot more moisture that will slowly evaporate and condense,” he explains. The moisture can create a sticky and fermented environment, which can change the taste of the truffle, which is why the napkins have to be changed regularly. Don’t use paper napkins that are too thin as they may disintegrate and stick to the truffle, he says.

A little truffle can go a very long way
When you’re done with the paper napkins, don’t throw them away! The napkins, now permeated with the intoxicating scent of the truffles, can be used to perfume eggs or rice. Simply place the paper napkins into a bucket of raw rice kernels or with a bowl of raw eggs with their shells still on, seal bowl with clingfilm, and let the truffle aroma infuse into the rice or the eggs’ porous shells.

After shaving your truffles, gather any loose trimmings into a container with a little olive oil to create your own concentrated truffle juice, or use them as sprinklings in truffle ice cream or truffle foie gras macarons, as Westaway does at Jaan. “We never put any truffle in the bin.” 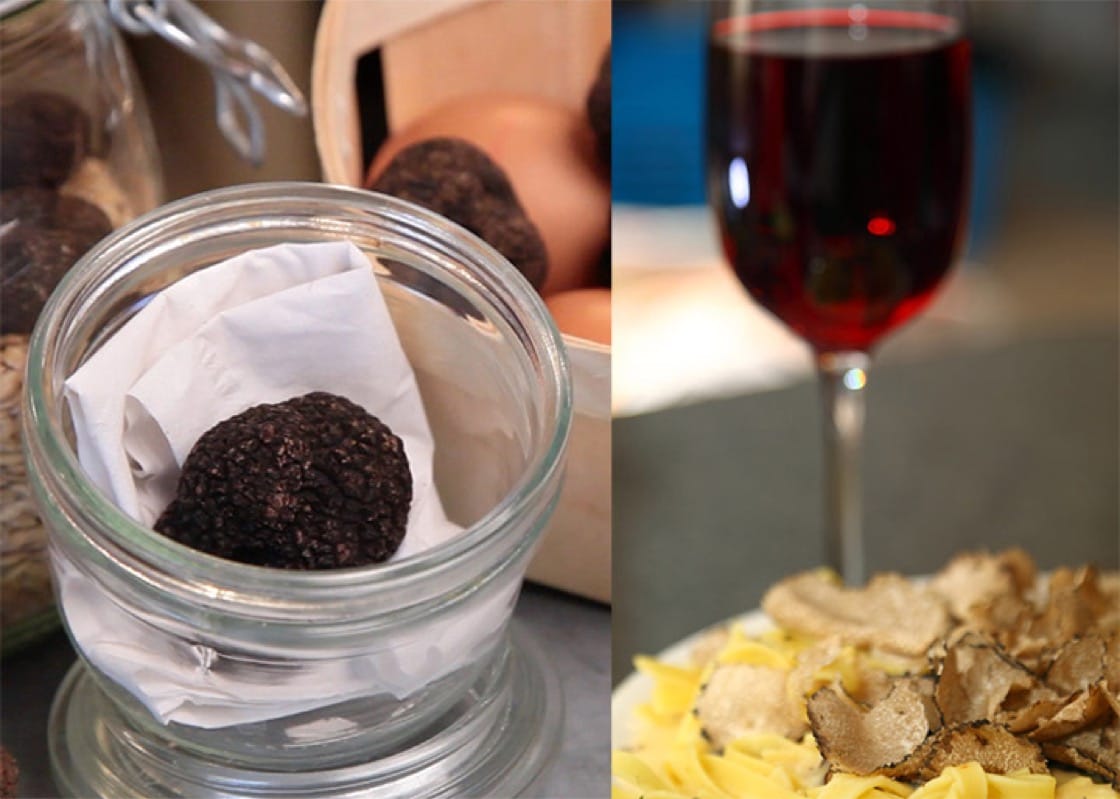 Store truffles by wrapping them in paper napkins. Later, pack the napkins with rice or eggs to infuse with truffle aroma. Photos: Plantin

Pair winter truffles with bigger, bolder wines
When it comes to wine and truffle pairing, red or white doesn’t matter as much as the age of the wines, says Vincent Tan, who spearheads the wine and beverage programme at two-Michelin-starred Odette. “Older reds will tend to have more mushroom, truffle aromas while older whites will show more hazelnut, savoury flavors, both of which are excellent complements to truffle aromas,” he shares.

Winter truffles are much more intense in flavour than their summer counterparts, and classically marry better with bigger, fuller wines, such as a Barolo or Barbaresco or even a very aged Bordeaux. For summer truffles, which are less aromatic, lighter Burgundy reds, or a full bodied aged Chardonnay do wonders. Think: simple roasted chicken with black truffles and an aged Meursault.

Size doesn't matter
When shopping for truffles, avoid those with thick outer coverings and coarse bumps - because the thinner the skin and smaller the bump, the higher the truffle content, say chefs. And size is no indication of taste. Chefs typically request for 30g to 50g “golf balls” - industry-speak for nuggets as close to a perfect sphere as possible - simply as a matter of aesthetics.

“Big truffles may cover a small appetiser entirely when shaven over it, but if the truffles are too small, they may end up looking like broken up pieces,” adds Corner House’s Tan. “I used to ask our suppliers why truffles don’t always come in the presentable round shape we would like them to be in, but after visiting and hunting with truffle hunters, I’ve come to realise that as an all-natural ingredient, we respect how truffles should be,” Tan elaborates.

Want to add some pizzazz to your homecooked meal with a little truffle upgrade? Try your hand at this easy-to-execute recipe from French food writer and television personality Sophie Menut, courtesy of Plantin.

Elbow Pasta with Ham and Truffle 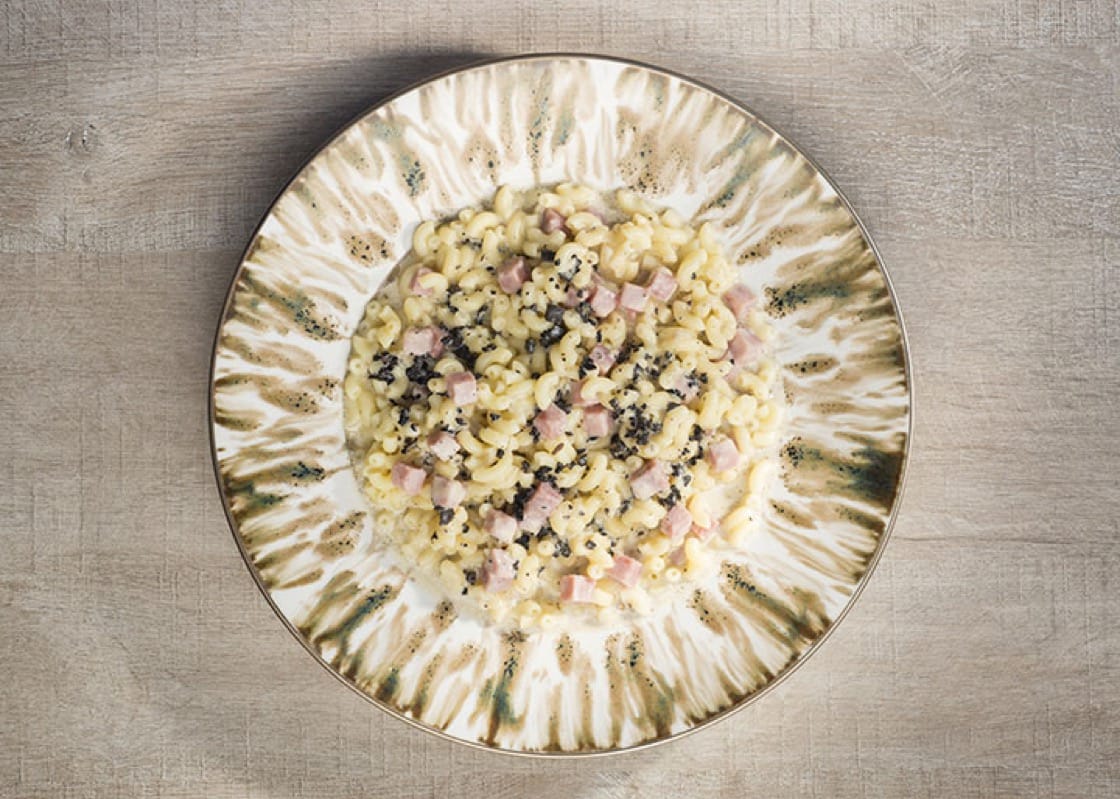 
Trick: If you have some pasta left that you want to serve again on the next day, add to them an egg that you have mix, a little of crème fraiche and some grated cheese they grill it in your oven for about 10 min. 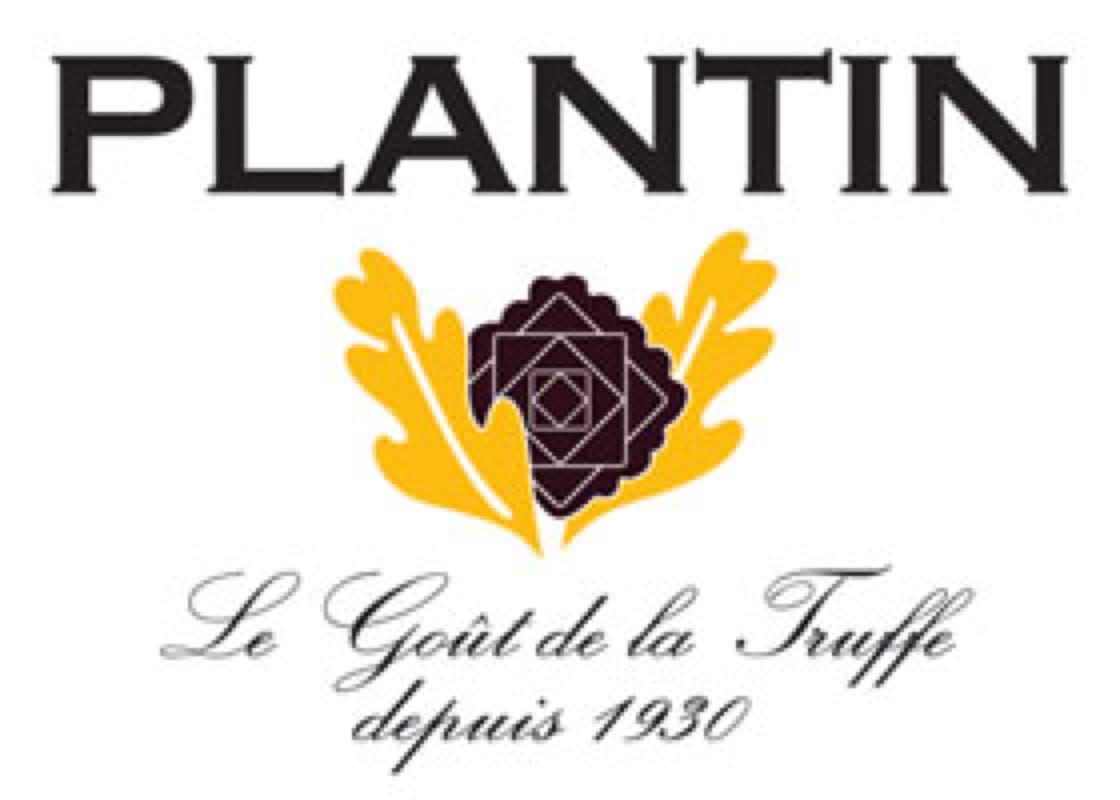 With over 83 years of experience, Plantin offers a selection of fresh and preserved truffles, dried morels, chanterelles and porcini mushrooms, as well as a variety of truffle flavoured oils, vinegars and condiments. Thanks to their consistent quality and their attentive service, Plantin is now a benchmark house in the world of truffles and fine dining, and is the preferred choice of Michelin-starred restaurants such as the Meurice by Yannick Alleno, Georges V by Eric Briffard and Daniel by Daniel Boulud in New York.