Chef Michael Anthony has been an advocate for sustainable agriculture his entire career. At One MICHELIN Star Gramercy Tavern, he creates a menu inspired by the nearby Union Square Greenmarket and full of locally grown produce that ebbs and flows with each changing season.

As part of the Union Square Hospitality Group, Gramercy Tavern was one of the first restaurants to cease all operations in response to the Covid-19 pandemic in mid-March. The move, though deemed necessary, had dire consequences for a key part of the supply chain that all farm-to-table restaurants support: the farms.

Norwich Meadows is one of the farms that supplies Gramercy Tavern with a significant amount of its fresh produce. An owner, Zaid Kurdieh, has been collaborating with Anthony for over a decade. When Kurdieh's restaurant customers disappeared, he quickly transitioned to direct-to-consumer sales and Anthony helped spread the word.

As part of these efforts, Norwich Meadows Farm recently partnered with The MICHELIN Guide on a weekly CSA-style farm box packed with fresh food from growers and artisans across the region. The program aims to support small farms and makers while also benefitting non-profit organizations like Citymeals on Wheels and God’s Love We Deliver (thirty percent of sales go towards purchasing farm-fresh foods for these communities).

In a recent phone conversation, Anthony talks about why he thinks Norwich Meadows Farm grows some of the best produce in the region and how Kurdieh helped shift the restaurant industry's conversation around food.

The following conversation has been edited and condensed for clarity.

When did you first meet Zaid of Norwich Meadows Farm, and why did his produce stand out?

I met Zaid and Haifa—his wife, who is an integral member and owner of that business—in 2006, which is when I left Stone Barns to open my own restaurant. I moved back to the city from Westchester, and I was plotting out my course. I spent my spare time in the market; the Norwich Meadows team had just recently showed up.

The Union Square Greenmarket is the port of entry for the region. As the largest and one of the most important markets in the city, it’s our access to fresh, local foods. It is also a great place to stay connected, network, and build community. The chef’s job is to pick out inspiring ingredients, but I have to be careful about separating what I see and taste from who I like hanging around. My goal has never been to serve my friend’s food. It’s been to make decisions based on flavor and quality.

I remember distinctly not knowing Zaid and Haifa but being drawn in by their charm. They would say things like, "Step behind the stand, we want you to taste some food." And Haifa is a great cook, by the way. It wasn’t a sales ploy, they wanted to get to know you. I was deeply moved by that.

As I tasted my way through the things that they grow, I was overwhelmed by the intense quality. I learned about their approach to organics, and I was equally impressed. Here is someone who stands for organics, in my opinion, for the right reasons. Somebody who jumps through the hoops of certification no matter whether it was a smart move business-wise or not. It’s their belief. It’s their values.

In late 2006, I accepted the job as executive chef at Gramercy Tavern. As soon as I started, I began to purchase a wide variety of vegetables throughout the season. Along the way, the relationship deepened. I started to zero in on a few varieties that they grew that I wasn’t familiar with. Things like the Persian cucumber, the varieties of eggplant, kale, and chard. Not all of them were completely unfamiliar, but they seemed to have a knack for growing the right varieties. There are [farmers] who grow things and say, I like the way it tastes. That’s true for them. 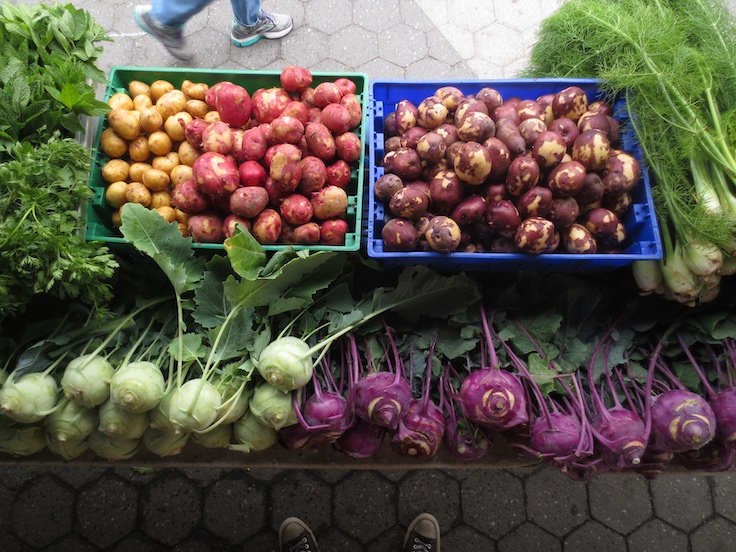 What sort of role does a farmer like Zaid play in the restaurant world?

As the relationship advanced over the years, we were able to think creatively. That’s another thing I like about Zaid and Haifa—they are inventive and innovative. And, they don't want to tell people how to do it, they ask, so some good things blossom from that kind of dialogue.

Zaid would say things like, "I have a friend that works at Cornell and he has worked on a pepper that tastes, smells, and looks like a habanero but he’s bred the intense heat out of it. Do you think you or anybody else would be interested?’" I came back to him with a resounding yes. Those kinds of conversations allowed him to form relationships that have gone on to really mark the industry. This notion that chefs, growers, and scientists are very connected.

No one wanted to hear from the chef guy. Decisions were made on yield and pest control. No one asked how it tasted. Those are huge breakthroughs. What I really love about Zaid is he wanted to enter into a long-lasting conversation. For me, it comes back to this: every great food culture is built on intimate relationships between growers and cooks and then consumers. It’s been a great source of information and inspiration for me and continues to be.

From your perspective, what does the future hold for small farms like Zaid’s?

The immediate answer is no one is really sure. What I have seen is the pure necessity of survival. Small farms have to pivot in order to continue to do what they do. My hope is that there is added importance to the outlets of local food like farmer’s markets. The new pivot of providing a [farm] box is now seen a little bit differently than the traditional CSA. It was always the best way to support a farm, but not exactly the best way in terms of dollars and convenience.

[Farms] are having to over extend themselves in terms of fulfilling orders and actually delivering them. It’s a stress and a strain but it’s also a business opportunity. It puts them in more contact with their consumers. Maybe the outcome is they're building a larger clientele. Maybe they're able to, as Danny Meyer would put it, do "hospitality house calls." With a person-to-person connection, maybe people will feel the same kind of admiration that I felt when I stumbled on them in 2006.

There’s a whole other aspect of this that Zaid is also involved with. He is also a very empathetic person. While they have focused their business on diversifying the crops that they grow, creating relationships with chefs, and expanding their business ability to distribute and deliver, they're really interested in feeding people who don't have access to their products. They are very sensitive to working with not for-profit organizations. And in this particular moment, figuring out how they can play a role in energizing the stagnant New York City restaurant infrastructure.

Things are so financially difficult. There are a lot of question marks. I'm hoping that if [home cooks] feel a little more encouraged and invest a little more time to understand how to make a meal, then there are more chances of experiencing the elation and the celebration of an ordinary day. This is circular. This is a closed loop. A return to the essence of good cooking and good living.