In 2008, Carlo Mirarchi planted a garden in the concrete-heavy, graffiti-tagged neighborhood of Bushwick, Brooklyn to supply his new restaurant Roberta’s and later, Blanca. Built atop shipping containers, this verdant burst of nature sits in stark contrast to the neighborhood’s desolate industrial sprawl. Mirarchi and his team now grow over 75 different plants on the premises and supplies Roberta’s with nearly a quarter of its produce. Last year, Chef Mirarchi channeled his experiences and learnings into the book The Garden Chef. The chef knows his seasonal vegetables.

To support The MICHELIN Guide and Norwich Meadows Farm CSA program, Chef Mirarchi has contributed two original recipes for the harvest of lettuces and cucumbers likely to appear in this week’s box. 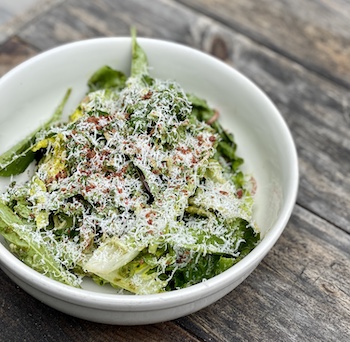 Method
Wash lettuce and herbs in abundant cold water to remove any dirt, then drain and dry thoroughly using towels or a salad spinner. Keep refrigerated until ready to use.

To make the salad, place lettuce in a large bowl and toss gently with just enough vinaigrette to coat the leaves: start with ¼ cup, adding more as desired (there will be plenty left over for another batch of salad). Next, add lemon juice, salt, and pepper to taste, followed by the ¼ cup of pecorino.

To serve, assemble the the salad on a large platter, using the largest leaves for the base and stacking to build height. Sprinkle with the herbs and additional shaved Pecorino Romano. Serve immediately.

To make vinaigrette: first, toast sea lettuce (or nori) in a pan or skillet over medium high heat, stirring frequently, until fragrant, about 1 minute. Once toasted, transfer to a blender along with the vinegar, sugar, garlic, and anchovy. Puree the mixture until completely smooth, then, with the blender running on low, gradually pour in the oils in a thin stream, to emulsify. (Vinaigrette can be made in advance and stored in the refrigerator, for up to one week)

Note: sea lettuce is a specialty ingredient and can be purchased from online retailers such as Maine Coast Sea Vegetables. A substitute can be made with flaked toasted nori, which is more readily available but may not yield exactly the same results. 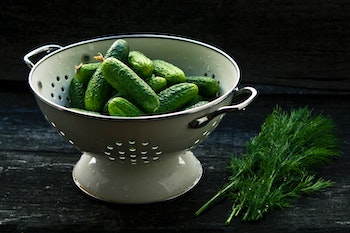 Method
Cut cucumbers into halves or spears, as needed to fit (small cucumbers can be left whole, if desired), before dividing them between the two jars. Set aside.

In a small pan or skillet over medium heat, toast dill and coriander seeds, tossing frequently, until fragrant and beginning to brown, 1-2 minutes. Remove from heat.

Once simmering, add vinegar and remove from heat. Immediately pour the hot liquid between the jars, to completely submerge the cucumbers, before covering and allowing to cool to room temperature. Transfer to the refrigerator. Pickles will be ready to eat after 3 days, but are best after seven.

Note: any vegetable fit to be eaten raw can be used in place of, or in addition to, cucumber—crudite favorites like carrots, radishes, cauliflower will all work well. Larger vegetables should be cut into bite-sized chunks, with any tough outer skin peeled away (as in the case of kohlrabi, or broccoli stem).