The first round of CSA boxes from The MICHELIN Guide in partnership with Norwich Meadows Farm will soon be arriving on customer’s doorsteps. Chef Michael Anthony, who has been transforming produce from Norwich Meadows Farm into delightful, composed dishes for over 15 years at Gramercy Tavern, has some advice for how to make the most out of a box filled with fresh, albeit highly perishable, and sometimes unfamiliar produce.

First, dedicate a little time to unpacking. Anthony recommends sorting through the box to take stock of what’s in it, but also to determine what needs your immediate attention. “I store all of my fresh cut vegetables in water for the first hour or so as they cool in in the refrigerator and then I lightly wrap them or put them in containers.” Proper storage will extend the shelf life of your goods.

Next, prioritize what you eat. “Eat the fresh things first. An eggplant can stand to wait in your refrigerator for a day or two. Tomatoes, depending on its ripeness, will be great on the counter. But the lettuce, you want to eat within the first day or two to enjoy it in its prime.” Anthony notes that reaching out to Norwich Meadows Farm directly (via Instagram or some other social channel) is a great way to engage with your farmer and get questions about produce answered.

Finally, thinking like a chef means getting the most out of each ingredient. “It’s the notion that items that are left from one meal become a whole new meal. Don't waste a thing.” Repurposing scraps and reducing food waste is an effective way to stretch the value of the box, but also, as Anthony puts it, “It is your responsibility to live up to the hard work that went into producing this [vegetable]. Consider Chef Michael Anthony’s comprehensive guide V Is for Vegetables for inspiration on how to cook a variety of vegetables that might show up in your CSA box.

Here are three recipes for the early summer harvest of asparagus, beets, and radishes likely to appear in this week’s box. 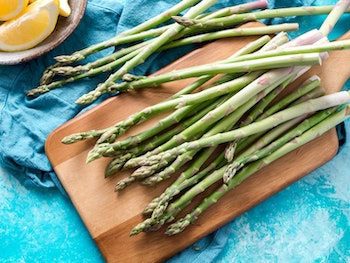 Method
Begin by blanching the asparagus. Bring a large pot of generously salted water to a boil, and prepare an ice water bath in a large bowl. Once the water is at a rolling boil, add the asparagus and cook until bright green and still al dente, 2-3 minutes. Using tongs or a strainer, transfer asparagus to ice water bath to rapidly chill. Once cool, drain asparagus and set aside to dry.

To make relish, heat the oil in a medium saucepan over medium heat. Add the spring onion, garlic, pickled ginger, and red pepper flakes, and cook, stirring frequently, until the garlic turns golden, about 2 minutes. Add the tomatoes, sugar, and salt and pepper to taste, and simmer, stirring often, until the tomatoes begin to soften and lose their shape, about 6 minutes.

Remove from heat and stir in the pickling liquid, soy sauce and sesame seeds. Let the mixture cool to room temperature. To serve, place the asparagus on a serving platter, spoon some of the cooled relish on top, and garnish with the sliced green onion.

Place the ginger in a small bowl or heat-proof jar. Bring the vinegar, water, sugar and salt to a simmer in a small saucepan, stirring to dissolve, then pour over the sliced ginger to submerge. Let cool to room temperature, at least one hour, then use immediately or cover and refrigerate for later use.

Note: Store-bought pickled ginger and it's liquid is a fine substitute. 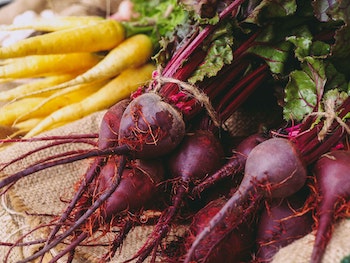 Place beets on a sheet of aluminum foil, season generously with salt, and wrap with foil to seal. Bake for 1 ½ hours. Remove from oven and allow to cool for 15 minutes.

Remove beets from foil package and use a clean kitchen towel (or paper towel) to rub off the skin.

Place the cleaned beets, oil, vinegar, and a splash of water into the bowl of a food processor. Pulse until finely chopped, but not smooth. Transfer the mixture to a bowl, add the onions and garlic, then season to taste with pepper, lemon juice, and additional salt, stirring to combine. Cover bowl and chill in refrigerator until ready to serve, or serve immediately, at room temperature.

To serve, transfer the beet tartare to a serving dish, then top with the pine nuts, chives, fennel, sunflower shoots, and baby beet greens. 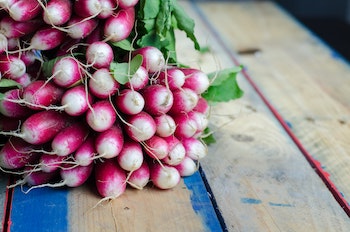 Method
Heat the oil in a medium saucepan over medium high heat. Add garlic, onions, and half of the radishes. Cook, stirring occasionally, until lightly browned, about 5 minutes.

Use a wooden spoon or rubber spatula to push the radishes to one side of the pot, leaving the bottom partially exposed. Add the honey and pepper and allow to caramelize, about one minute. Add vinegar, the remaining radishes, and salt to taste, stirring to combine.

Cook, stirring occasionally, until all the radishes are heated through and translucent (but still firm), 2-3 minutes. Remove from heat, add lemon juice, and serve immediately.