Norwich Meadows Farm is a 230-acre farm in Norwich, New York about a three-hour drive from Manhattan. Prior to the Covid-19 pandemic, the farm's primary source of revenue came from supplying the city’s finest restaurants — from Three MICHELIN Star Per Se to One MICHELIN Star Contra — with impeccable, seasonal produce. Over the past few weeks, Zaid Kurdieh, the farm's owner, and his team have made the challenging but necessary transition to selling a greater portion of their goods directly to consumers in the form of CSA-style boxes.

The MICHELIN Guide has teamed up with Norwich Meadows Farm to provide members of our community with a curated box of extraordinary, farm-fresh goods. Kurdieh will hand pick items from his trusted network of farmers and artisans, which will be packed and delivered to customers' homes. The program will not only support small regional farms affected by the pandemic, but proceeds from each box sold will go to purchasing fresh food for Citymeals on Wheels and God’s Love We Deliver.


The following interview has been edited for length and clarity.

I’ve read that 60% of your clients are restaurants. How were the first few days of New York on Pause for you as restaurants were forced to shut down?

It’s like our whole world unraveled. I was in the middle of discussions with Blue Hill and Upland. We do a lot of crop planning and I was in the middle of that. When they closed everything down, all of our plans changed. The other side of the coin was, everybody is locked down in their houses and we were used to making deliveries. I have 25-30 employees. They're on the ground, and people need to eat. So how can we change what we do to fix the problem that we're facing? We had no choice.

How fast did you have to make that switch?

About a week. We were thinking about this model because home delivery isn't anything new. We tried it with Michael Anthony [of Gramercy Tavern] years ago. It was successful in the sense that people wanted it, but we couldn't figure out how to make the deliveries. Now there's all kinds of delivery mechanisms and we've developed our own. That enabled us to do these do these boxes. Nonetheless, it's still a monumental effort. It's been a very exciting thing in the sense that it's taught us a lot of lessons. And we're still evolving this whole thing. It’s a huge undertaking. There are so many things happening at the same time to make this happen. 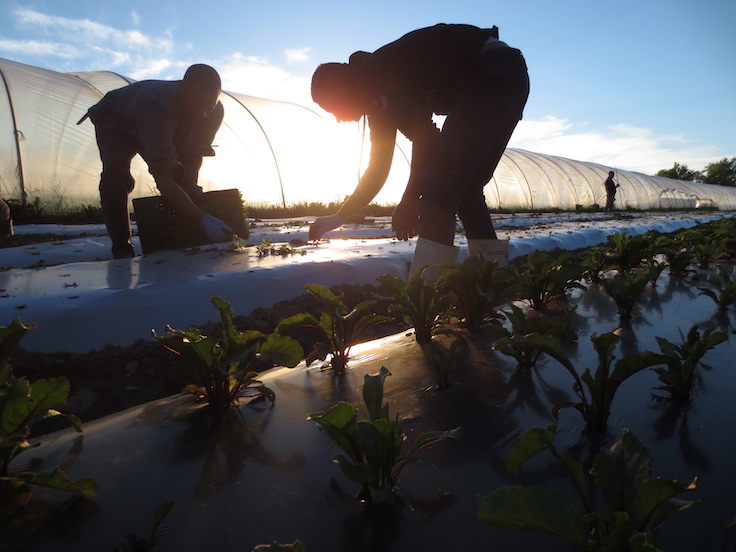 From a financial standpoint, is it working?

It’s the only thing keeping us going. Some of the restaurants have started opening, we’re starting to see a little bit, but it's nothing compared to normal. [Sales at] the farmers markets are still somewhat weak. The other big problem is we're just at the tip of the iceberg of production. What happens when we have all of our produce? We scaled back a bit, but not a lot. We plant in succession — so we're still planting — but some of our things like peppers, eggplants and tomatoes have been planted.

I do suspect that there will be some more disruptions. The larger farms, they’ve been hit harder. I think the ripple effects of all of this are still yet to be seen. In our case, with smaller farms, we're more nimble. Because we have this kind of support, this enables us to basically plant and produce.

Why do you think people should buy this box, or any CSA-type box, right now?

We're certified organic, we try to produce top quality stuff. That's why we've earned the trust of all these restaurants. They don't want just ordinary produce, they want something fresh, something high taste. We're also locking in some of the best stuff from regional people. Working with MICHELIN, that's going to draw in people with some of the best stuff in the market.

We’re working with a very good organic producer way up by Watertown, New York. When this thing happened, they lost 100% of their business. So, it’s a community effort. And in this case, it's going to benefit people of lesser means. From a safety point of view, it's also going to benefit the person buying the box because they don't have to go anywhere.

We're also working with restaurants. We are hiring restaurant workers to put the boxes together. We started out doing that at the farm but after a week, we realized we were either going to farm or pack boxes. So we quickly reached out to the restaurants. Restaurant people were shell shocked for a while. Some responded faster than others. I’ve been encouraging them. Hey, you got lemons? Let's figure out how to make lemonade.