At long last, Jean-Georges Vongerichten’s highly-anticipated restaurant, The Fulton—his first seafood venture—has opened for business in Manhattan’s South Street Seaport. The project grew much attention back in 2015 when Vongerichten boldly proclaimed he would be expanding his footprint to the area to be a part of a massive undertaking to revitalize the once sleepy neighborhood. Aside from opening several restaurant concepts including The Fulton, Vongerichten wanted to bring the famous fish market back to its rightful home. (The current Fulton Fish Market was moved to Hunts Point in the Bronx in 2005 after nearly two centuries at its original site underneath the Brooklyn Bridge.)

Nestled on Pier 17, the 7,300-square-foot restaurant spans two floors, and is adorned with a nautical motif by designer Yabu Pushelberg. It features both indoor and outdoor seating, perfect for fawning over the sweeping views of the Brooklyn Bridge and neighboring Brooklyn Heights.

Once the restaurant finds its footing, executive chef Noah Poses (formerly of The Modern) will helm the kitchen. Guests can expect a variety of crudos on offer and appetizers like spicy Manhattan clam chowder, soft-shell crabs with jalapeño-coriander salsa and warm octopus with fresh mozzarella. Seafood mains—which are what you’ve been waiting for—include roasted monkfish medallions with Calabrian chile, lemon and capers; black sea bass with lemon-turmeric emulsion and slow-roasted carrots; and fish and chips served with crushed peas. 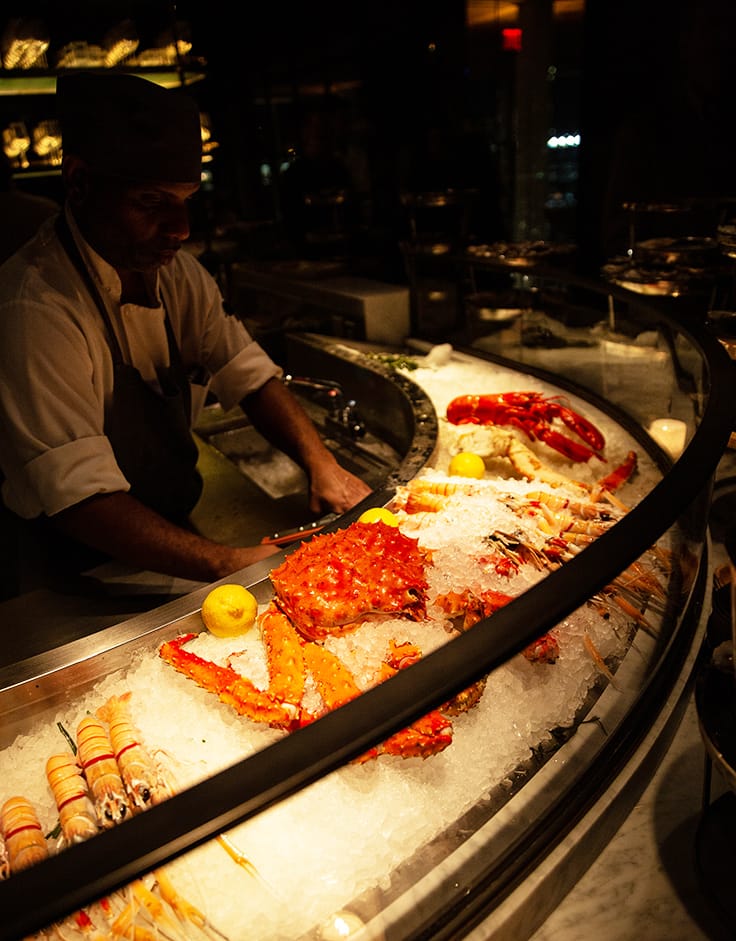 A selection of oysters, littleneck clams and other offerings are ripe for the picking at the second floor marble raw bar.

The Fulton marks the 36th restaurant for Vongerichten, whose portfolio ranges across the Americas and Southeast Asia. The aforementioned 50,000-square-foot space adjacent to The Fulton, which will feature a seafood market and restaurants (including a Chinese, Italian and vegetarian concept), is slated to open in 2021.

Images courtesy of The Fulton.