This collection of cool hotel designs in Australia skews toward the rural, where the hard edges and hand-crafted intent of each building rubs up against the unpredictable slink and sway of nature. We’ve included city hotels too — but city hotels are expected to be cool, so it’s harder to stand out. There are 20 hotels, and we’ve only just scratched the surface. When you’re done reading, be sure to check out all of our other hotels in Australia, especially in the big cities. There’s no shortage of cool.

Swansea
Barely a hotel at all, Avalon Coastal Retreat is a stunning modernist three-bedroom house on the east coast of Tasmania. The sea views through the house’s glass walls are extraordinary, but the interiors give them a run for their money, thanks to the fine work of local architect Craig Rosevear. A secluded beach lies at the bottom of a walking path, and wetsuits and boogie boards are available if you’re feeling brave. 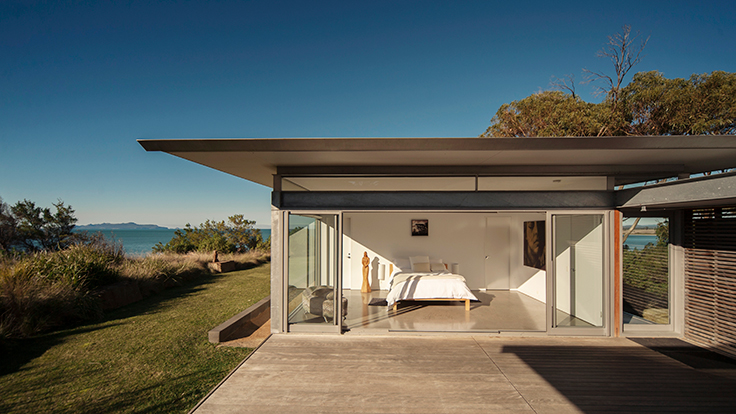 Hobart
A masterful piece of historical preservation, the Moss Hotel takes a pair of 19th-century warehouses near the Hobart waterfront and transforms them into a visually arresting and utterly contemporary luxury boutique hotel. The colors and textures are inspired by the natural beauty of Tasmania, and living plants make a fine complement to original timbers, exposed brick, and masonry. Every room is unique, and all are stylish and comfortable. 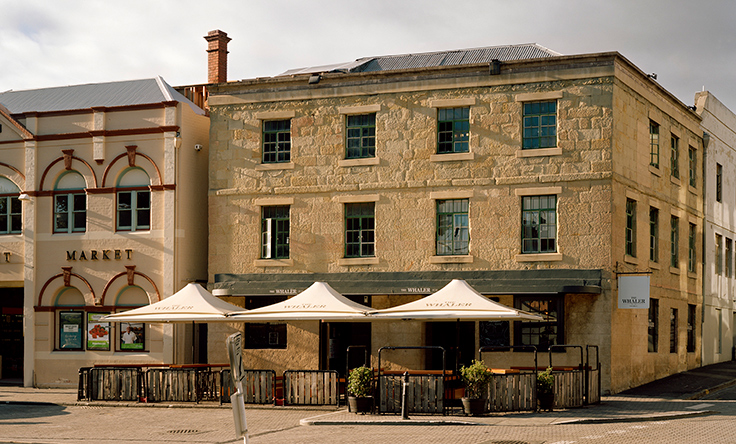 Coles Bay
The utterly unique Freycinet Peninsula is a tiny appendage sticking off the sparsely populated east side of the island of Tasmania. So suffice it to say, if you make it as far as Coles Bay, you’ve really gotten somewhere. You won’t likely find yourself just passing through — and the Freycinet Lodge is a worthy destination. In keeping with the rugged realities of the landscape, it’s something like a luxury rethink of the classic camp cabin. 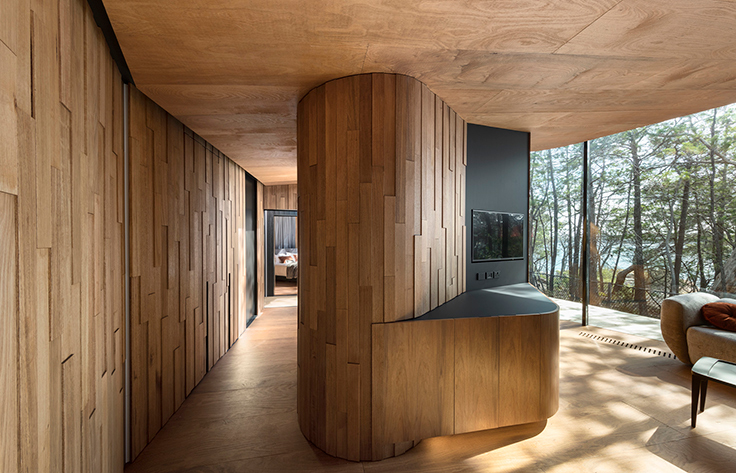 Hobart
Australia occasionally surprises with audacious contemporary architecture in the unlikeliest of places, and MONA Pavilions, overlooking the River Derwent on the outskirts of the Tasmanian capital of Hobart, is a prime example. Its eight spectacular pavilions are named after Australian artists or architects whose works are in the accompanying Museum of Old and New Art collection, and they’re stuffed to the gills with high-end residential comforts. 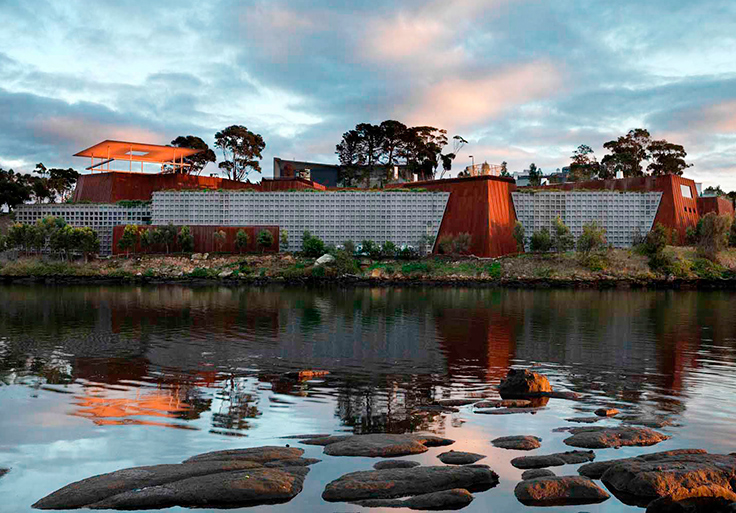 Binalong Bay
The next step closer to nature, after an eco-lodge, is a tented camp resort. Perhaps inspired by Africa’s safari camps, Bay of Fires Bush Retreat, near Tasmania’s Binalong Bay, offers upscale, beautifully designed tents, as well as a Bunk House for a larger party and a King Room for traditionalists. Furnishings are rustic but stylish, and the outdoor setting is the primary attraction, offering opportunities for surfing, diving, mountain biking and much more. 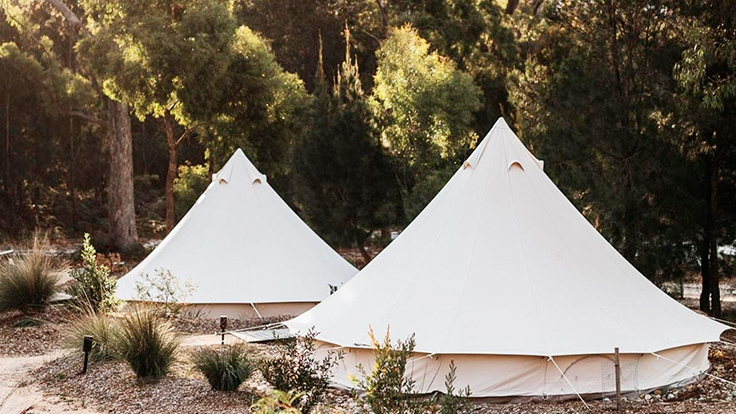 Lizard Island
Australia’s Great Barrier Reef is like Jerusalem to divers, many of whom make the pilgrimage to Queensland in search of the ultimate undersea experience. And this part of Australia is home to some impressive resorts as well. Among these one of the most closely guarded secrets is Lizard Island, at the northern end of the outer reef, a near-private island, home to, at maximum, 80 guests at a time, plus any number of the Goanna lizards for which the island is named. 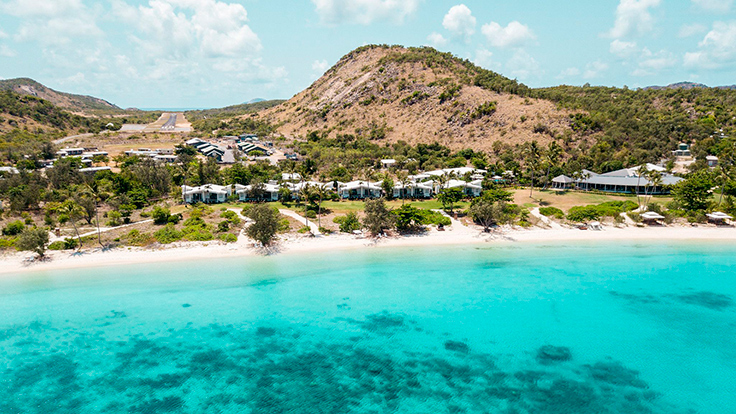 Brisbane
Brisbane’s cosmopolitan arts and nightlife district of Fortitude Valley is the setting for the Calile Hotel, an urban boutique-style hotel that nevertheless feels a bit like a beachfront resort — though its central pool does its best as a stand-in for the ocean. Rooms look out over the pool or the Brisbane skyline, and are decorated in a handsome and soothing palette of soft blues and rosy earth tones. Meanwhile the Kailo Medispa and the well-equipped Gymnasium further the luxury-resort vibe. 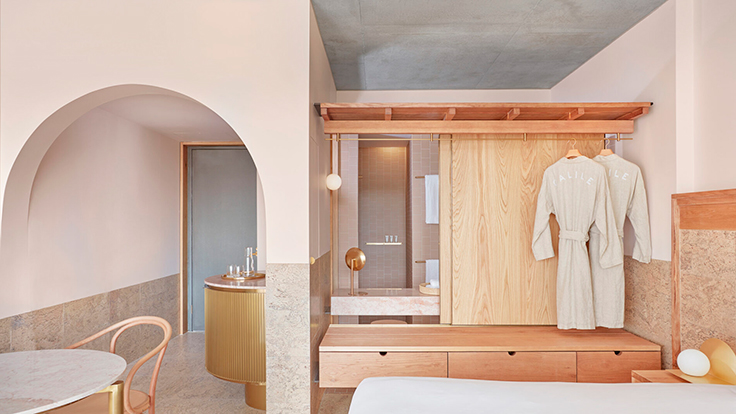 The Roozen ResidenceMargaret River
The name isn’t an attempt at hominess, but a matter-of-fact statement: the Roozen Residence was built as a private beach house for artist and surfer Ron Roozen, just outside of the Western Australian beach town of Margaret River. The architecture is stunning, as are the interiors, and the 180-degree ocean view certainly doesn’t hurt. It’s got all the comforts of home, if home were a fantastically luxurious three-bedroom modernist masterpiece. 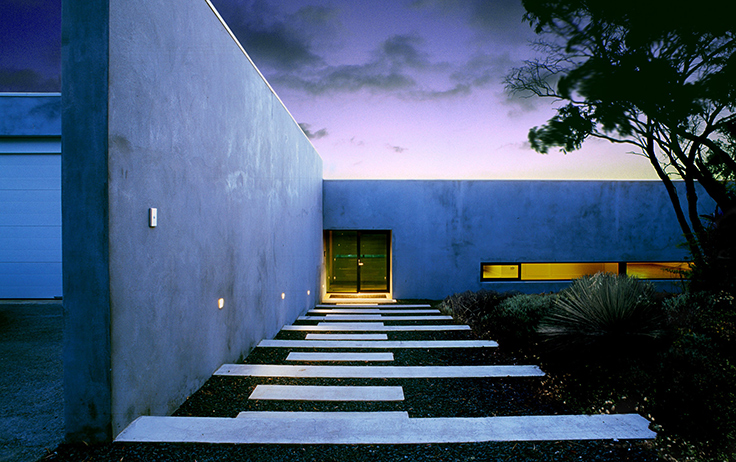 Perth
Not only is COMO The Treasury housed in a truly grand space — a series of restored 19th-century state buildings, all soaring arches and stately white columns — but the 48 guest rooms are outfitted in a manner that’s lavish by any standard. Did we mention there’s a pair of chic restaurants, a cocktail bar, and a signature spa? It’s enough to make you want to stay in the City of Light (so nicknamed when Perth’s citizens turned all the lights on as astronaut John Glenn passed overhead in 1962) for another day or two. 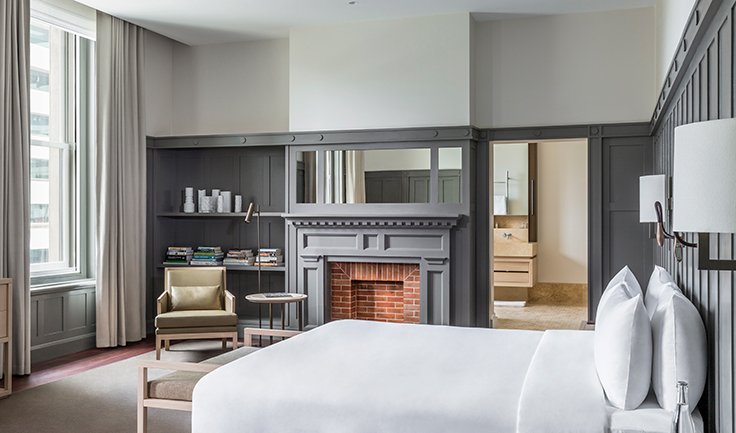 Yallingup
The Empire Retreat and Spa, despite its small size, is actually more than a retreat and spa — it’s a winery as well, with twelve acres of vines surrounded by virgin bushland. The house was a private residence first, lending it plenty of personality, while its eleven suites are stylish and contemporary-luxe, furnished by Empire’s other concern, an upscale homewares brand. The spa is impressively well-equipped and visually stunning. 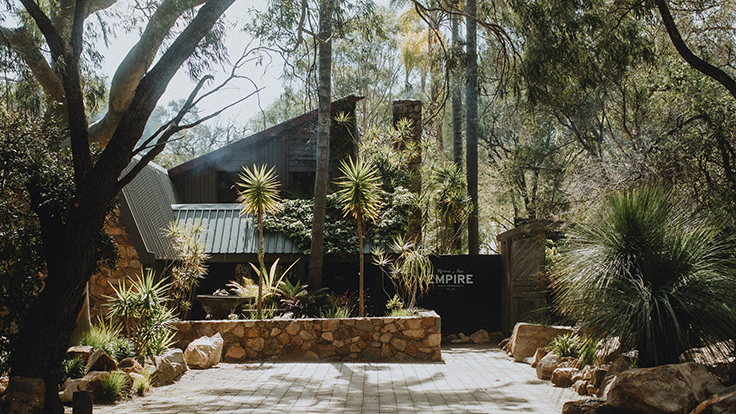 United Places Botanic GardensMelbourne
Think of it as a luxury boutique hotel for the apartment-sharing era. Behind the understated name of United Places is a first-time hotelier and an all-star team of architects, designers, artists and other creatives, and the result is one of the most highly accomplished debuts we’ve ever seen. The setting, on the southern edge of the Royal Botanical Gardens, is the best of two worlds: all around is the hip neighborhood of South Yarra, while straight ahead is a pastoral scene that’s unusual for the heart of this city. 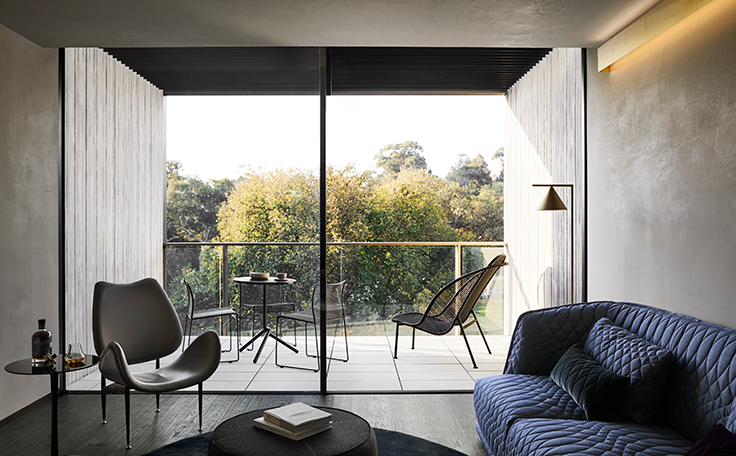 Port Fairy
It would be a missed opportunity if a Victorian seaside town called Port Fairy were anything less than magical. Fortunately for all involved, it lives up to its promise. Drift House isn’t just an architectural marvel, combining a classic Victorian house with an uncompromisingly modernist addition, but it’s owned and operated by a family with a keen sense of what really matters in hospitality. 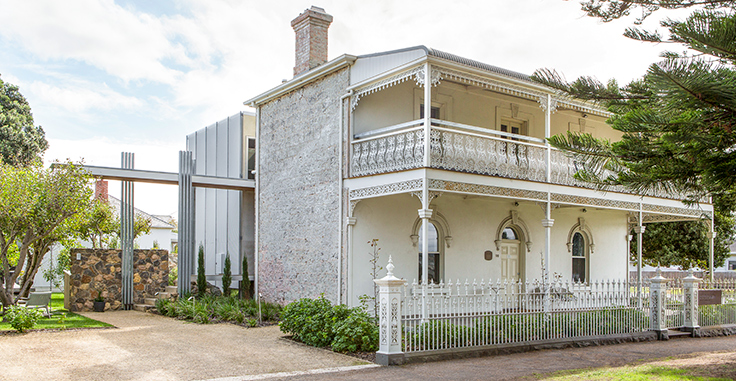 Bamurru PlainsPoint Stuart
The traditional luxury safari experience has its origins in Africa, for obvious reasons, but if you’re willing to look beyond the Big Five, you’ll find Bamurru Plains a worthy entry in the genre. Set at the edge of the Kakadu National Park, in Australia’s Top End — check the map and you’ll understand — it specializes in so-called “Wild Bush Luxury,” offering vast tented bungalows surrounding a lavishly outfitted central lodge. 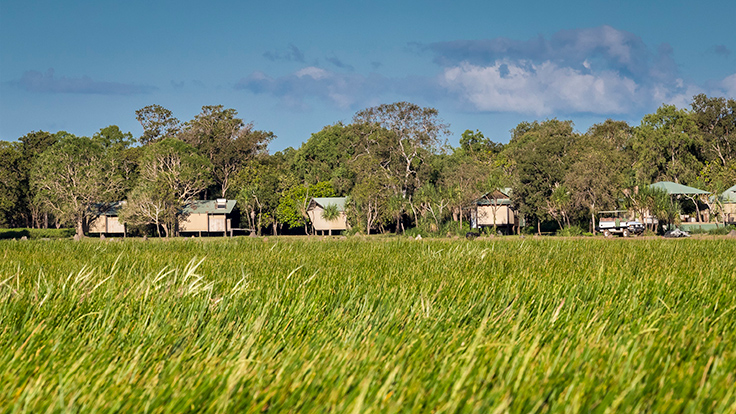 Yulara
The name Longitude 131° refers to the precise east-west location of Uluru, the rust-colored monolith formerly known as Ayers Rock, itself the primary attraction in Australia’s Red Centre, and the reason for this hotel’s existence. Not quite the only lodging within sight of this popular tourist destination, Longitude 131° is by far the most luxurious, and offers the best view — each of the tentlike guest cabins looks through full-length windows across six miles of desert at the thousand-foot-high Uluru. 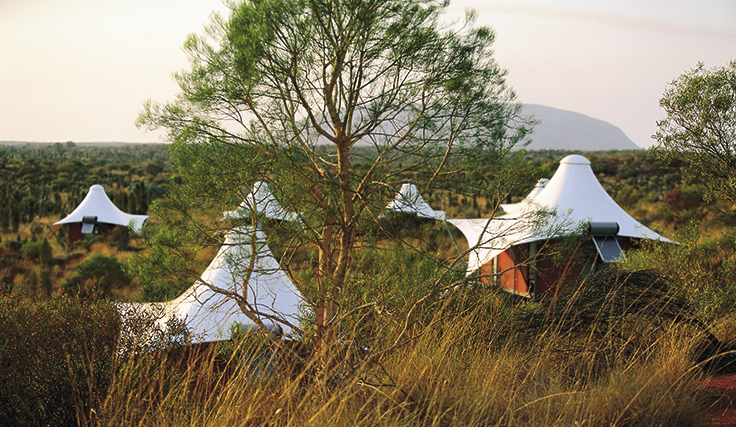 Spicers Sangoma Retreat
Blue Mountains
You don’t have to go far from Sydney to get well and truly away from it all. Spicers Sangoma Retreat is fifty miles from the city, a little over an hour by car, but far enough into the Blue Mountains that the urban sprawl is but a distant memory. That faraway feeling is accentuated by the forest views, and by the African-inspired interiors — Sangoma is the Zulu word for “healer,” and there’s more than a little bit of a safari-lodge accent to these eight lavish modernist suites. 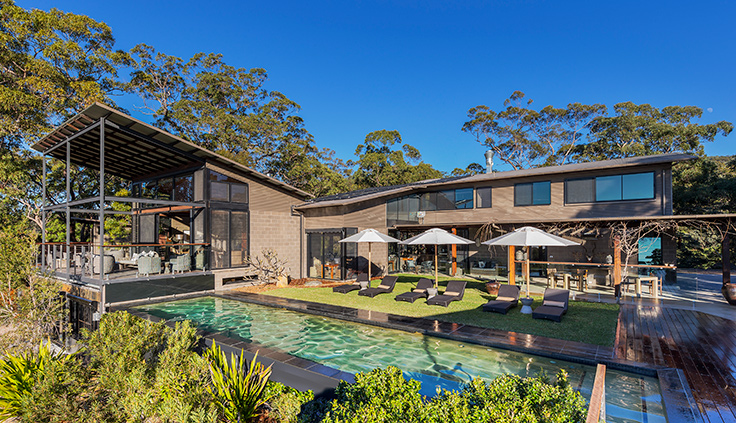 Canberra
Ovolo Nishi occupies three floors of the mixed-use Nishi building, which is by some distance the most memorable landmark in Canberra’s emerging cultural district of New Acton. The building is also home to an impressive contemporary art gallery, a bike shop, a pilates studio, a spa, and an art-house cinema — which is the long way of saying it’s the perfect location for what has to be the hippest hotel in town. 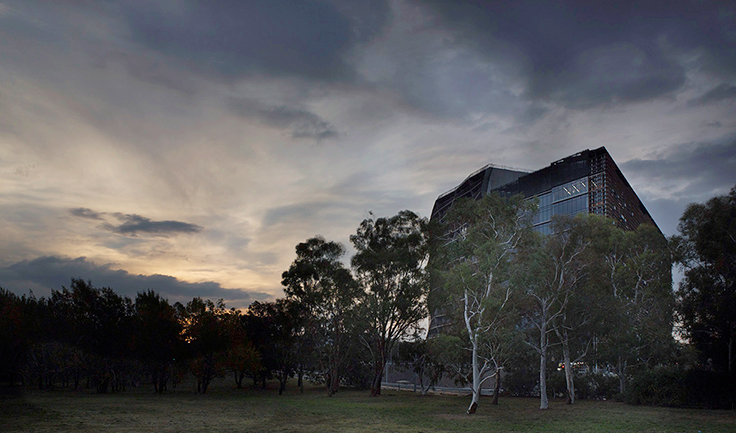 Cabarita Beach
Retro motels refitted into contemporary boutique hotels are one of our favorite genres in America, and we can’t say we’re disappointed to see them cropping up in Australia as well. Cabarita Beach, just outside of Gold Coast on the border between Queensland and New South Wales, is a legendary surf spot, and Halcyon House opens right onto a private section of it — if you want a taste of Australian beach life at its most stylish, this is the place to get it. 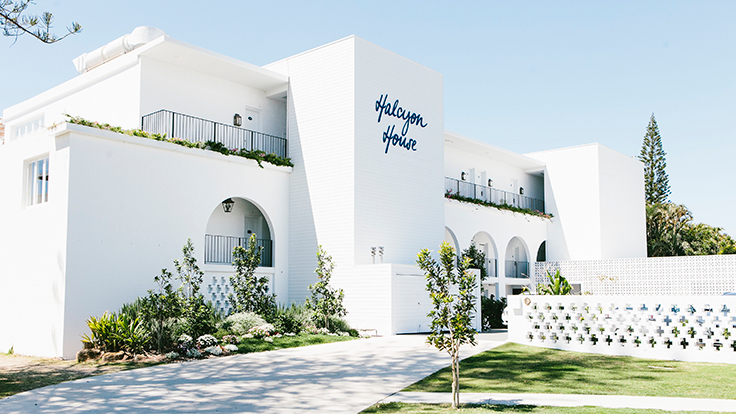 Byron Bay
With just over a hundred private villas, Elements of Byron Resort & Spa is a modern take on the resort concept. There’s the requisite spa, of course, and a range of dining venues, the massive infinity pool, the indoor-outdoor cocktail bar. But the architecture is sleek and contemporary, low-impact and single-story, the curving lines inspired by organic forms — the striking central pavilion is modeled after the look of a windswept sand dune. 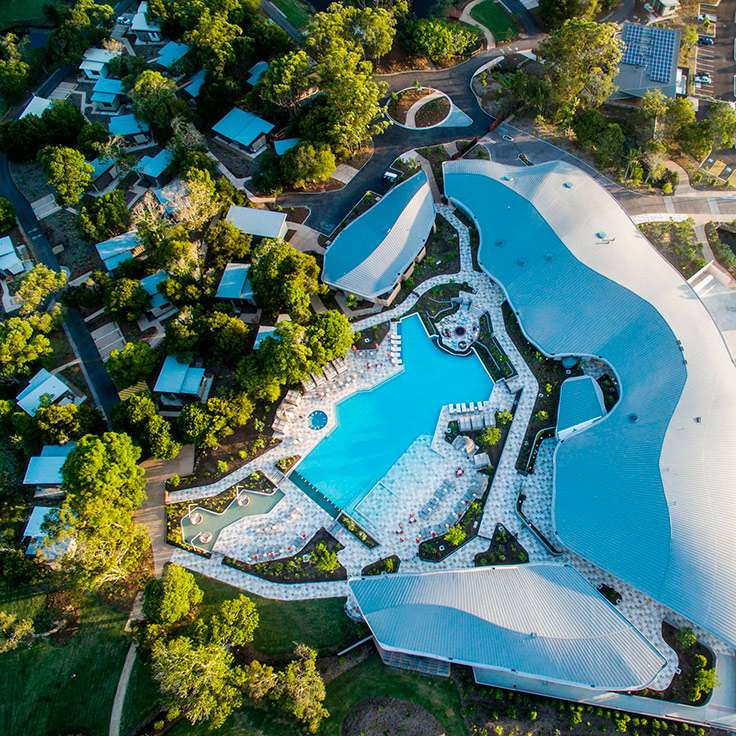 Sydney
Quirky, stylish Medusa is a converted eighteenth-century Victorian townhouse in ultra-fashionable Darlinghurst, Sydney’s gallery and boutique district. The award-winning design, by prominent Australian interior architect Scott Werner, is anything but Victorian; in fact, these daring, modern interiors are a large factor in Medusa’s draw, especially among the young, creative types the hotel (and the neighborhood) caters to. 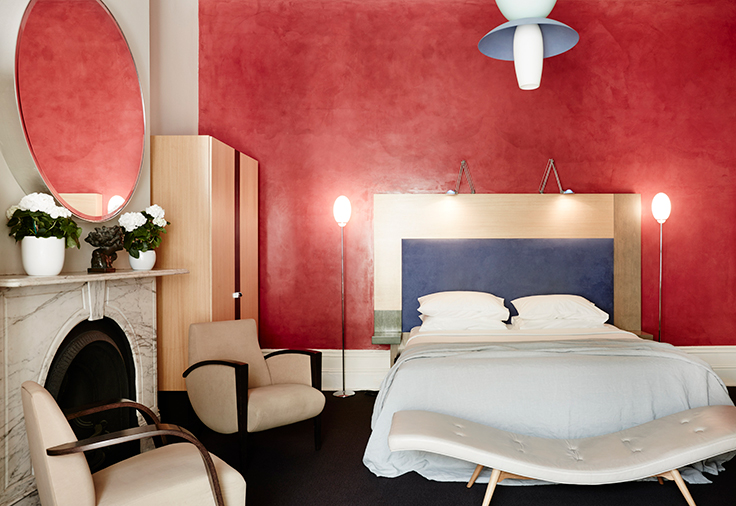 Hero image: Freycinet Lodge
All photos by the hotels unless otherwise specified.