The Freshest Hotels in Florence

You may not think you want any funk in your Florence hotel, but after seeing the city, you might need it. Take a load off — and take yourself to a hotel with flash and flair to spare.

Florence is a beautiful, but heavy place. It was the cradle of the Renaissance. It’s where Dante, and da Vinci, and Galileo, and Michelangelo forever changed how we view the world. The weight of the city’s history is as colossal as the weight of the stone used to build the Duomo. And in we wander, filled with awe, forced to reckon with our small, flickering place amongst it all.

Last week we covered Tuscan villas, and this week we’re in Florence, looking for hotels to help lighten the mood. When you’ve spent the day contemplating your mortality and questioning the relative meaninglessness of your contributions to eternity, you might want a hotel that puts a little pep in your step via the occasional dalliance with flair and whimsy. We’ve assembled a bundle of standouts below.

Or, for the spiritually unburdened, consider all of our other exceptional hotels in Florence. 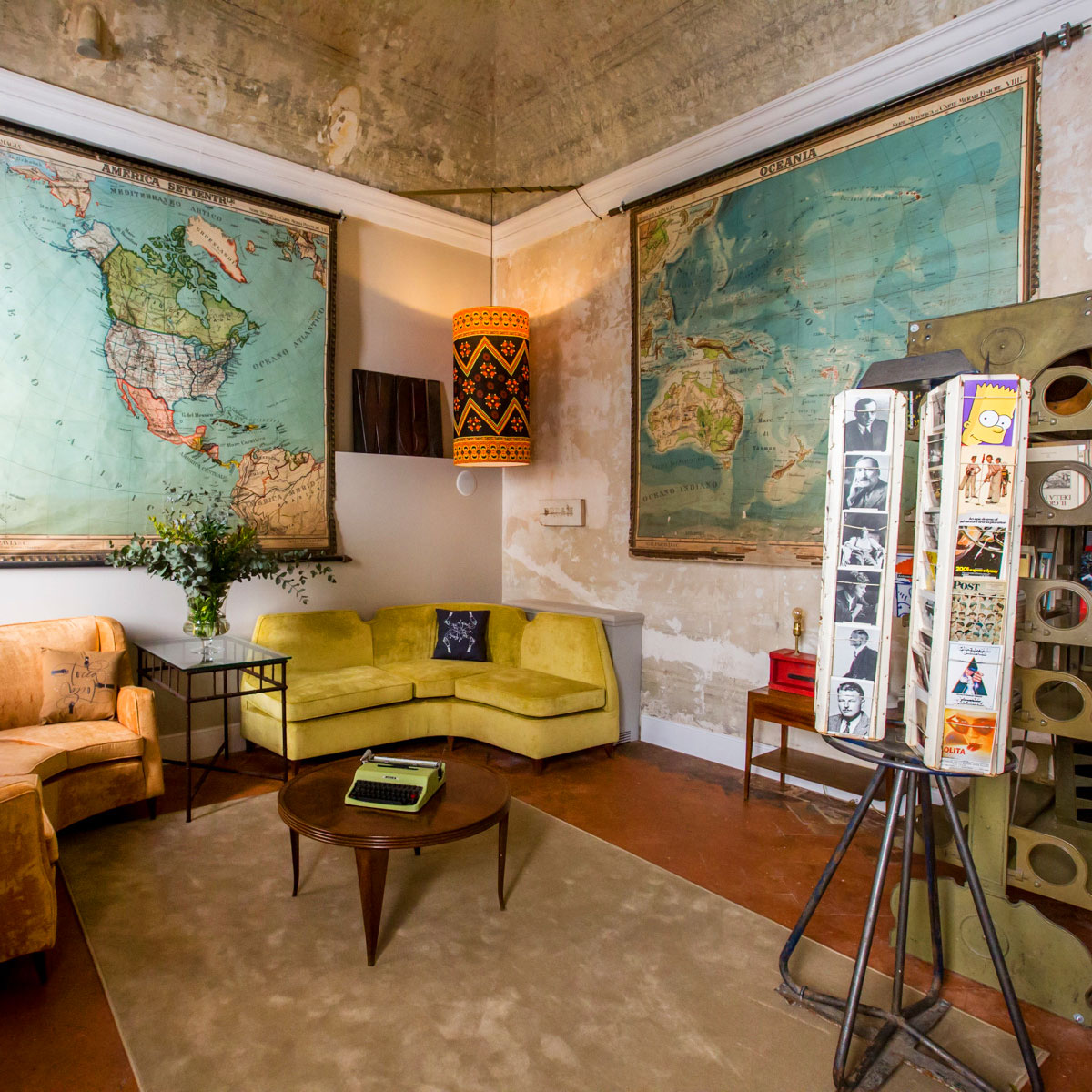 Florence, Italy
The name Oltrarno Splendid is simply a matter-of-fact description of the circumstances: here we have a stylish and eclectic 14-room bed and breakfast in Oltrarno, the quieter but no less cultured neighborhood on the other side of the Arno river from Florence’s city center, conceived by no less illustrious a team than Francesco Maestrelli, Matteo & Marco Perduca, and Betty Soldi, the minds behind Florentine favorites Soprarno Suites and Ad Astra. 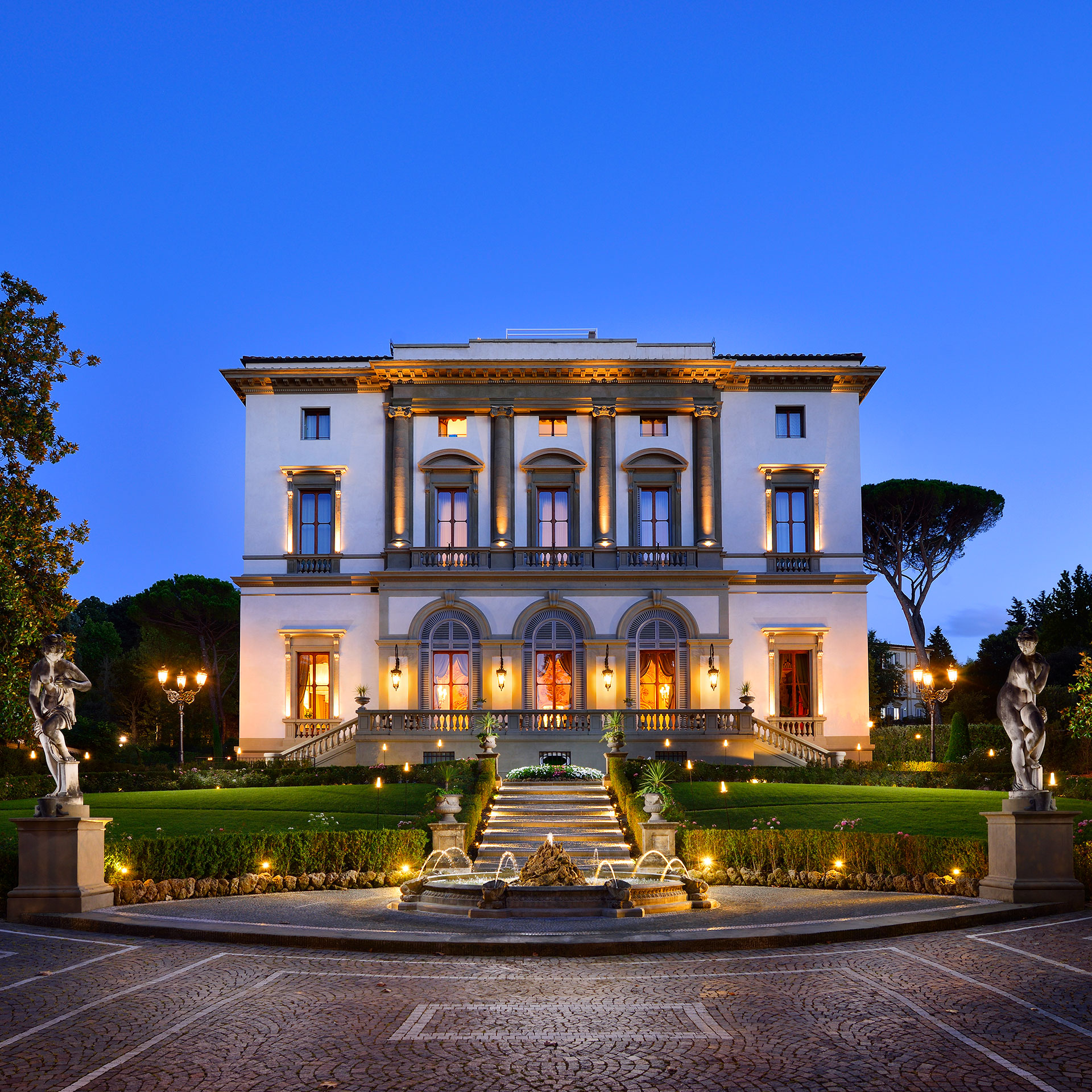 Florence, Italy
Built by Baron Oppenheim for his bride in the nineteenth century, Villa Cora still feels like a private residence. This neoclassical mansion sits on the outskirts of Florence, yet is still convenient to the city, near the Boboli Gardens and the Piazzale Michelangelo. The interiors are unabashedly opulent, as one would expect from a historic Italian villa, and unmistakably colorful; rooms are outfitted with antique and reproduction furnishings, as well as Persian and Oriental rugs and period artworks. 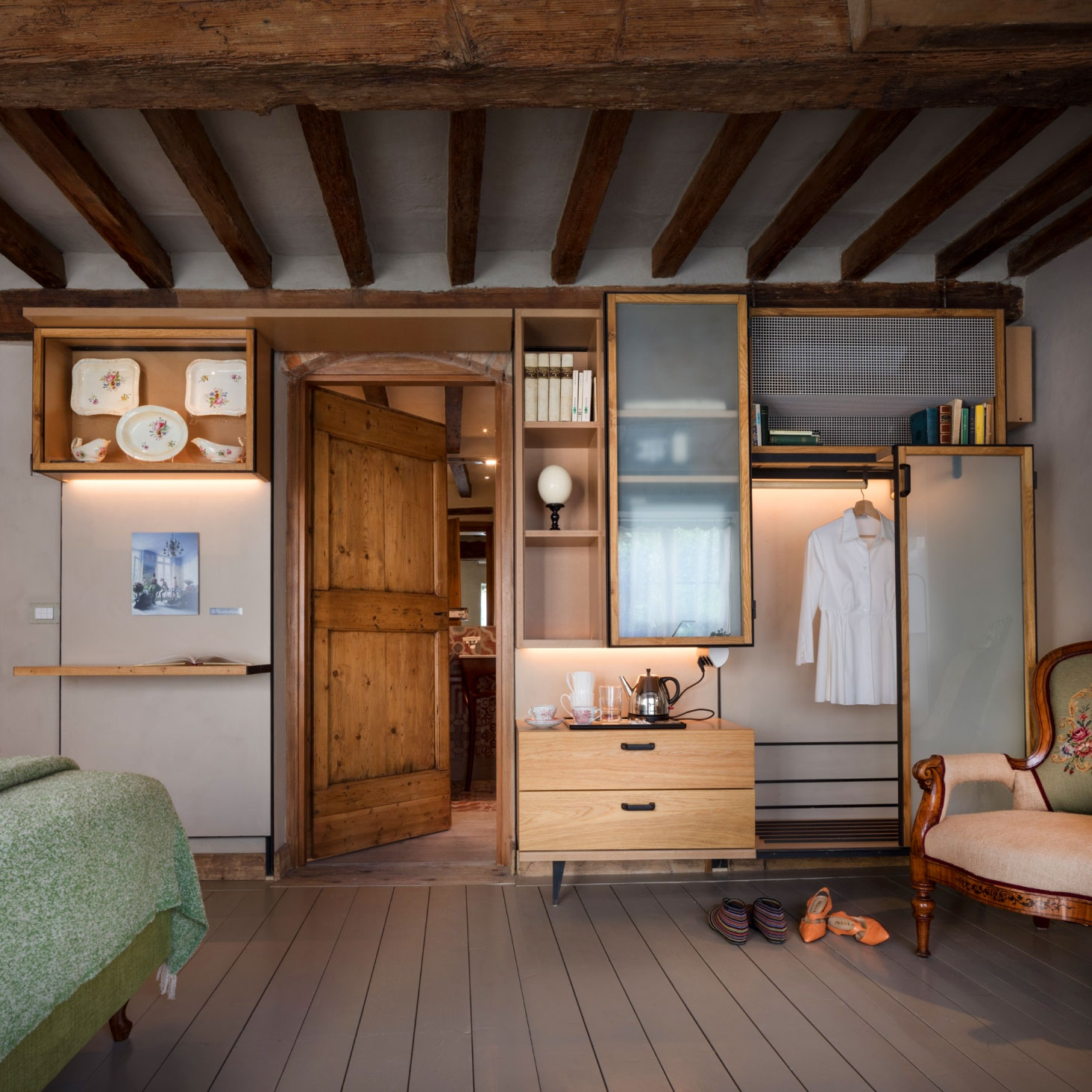 Florence, Italy
Don’t get us wrong, the traditional city-center experience can be a great one — but if Florence has a hipster neighborhood, it’s Oltrarno, just across the river from all the most famous sights (and almost all of the tourists). This is where you’ll find Ottantotto Firenze, a seven-room boutique hotel that’s the latest evolution of a Renaissance palazzetto, previously an aristocratic home and lately owned by an architect who oversaw its remarkable transformation. 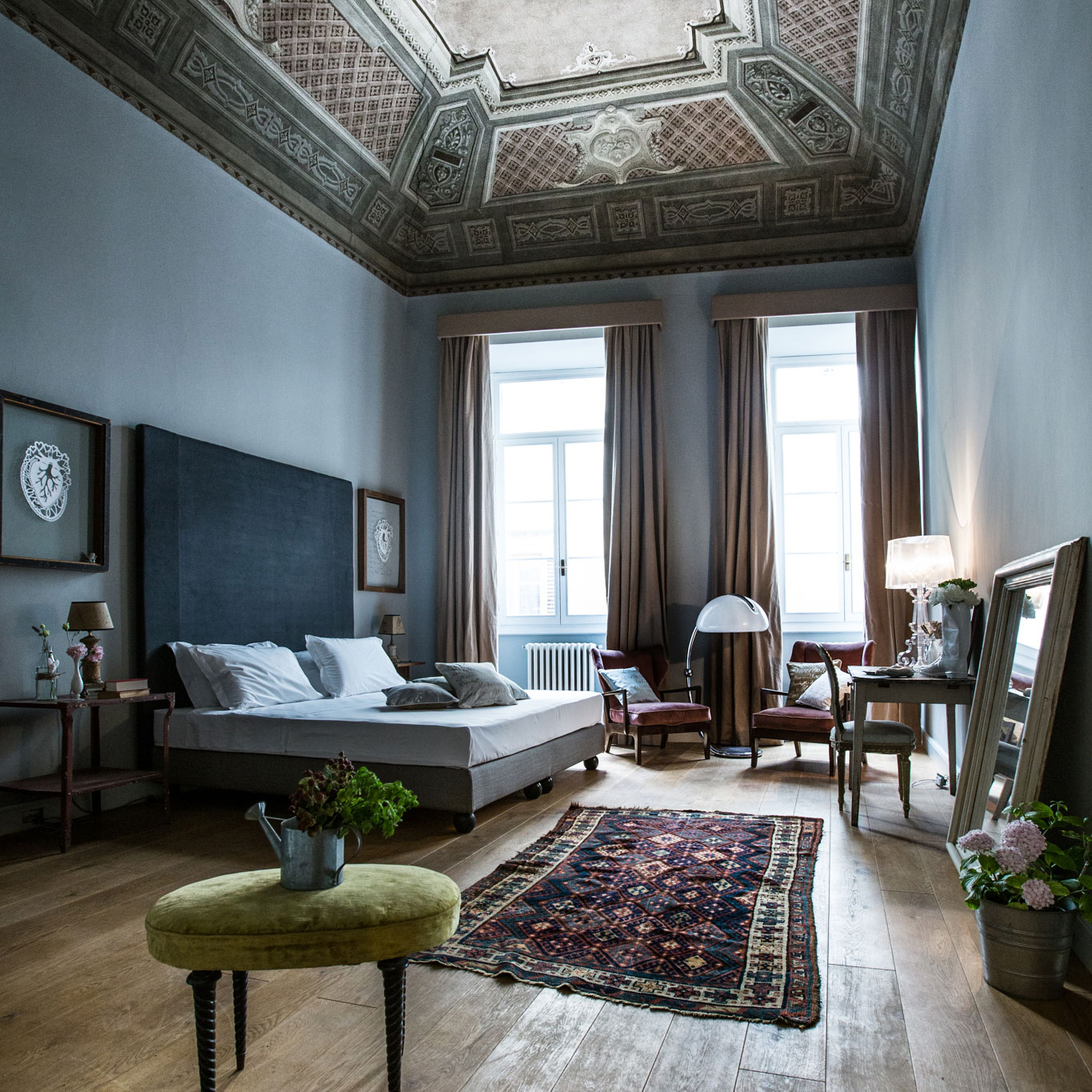 Florence, Italy
The eclectic, bohemian, vintage-inspired style that’s currently all the rage in the US is also all the rage in Europe — and in Italy, where the word “vintage” covers several hundred more years of history, the resulting style is rich indeed. For an illustration, you could hardly do better than Soprarno Suites, a small, quiet, intimate little ten-suite hotel right in the heart of Florence, a few minutes’ walk from the (not at all quiet) Ponte Vecchio. 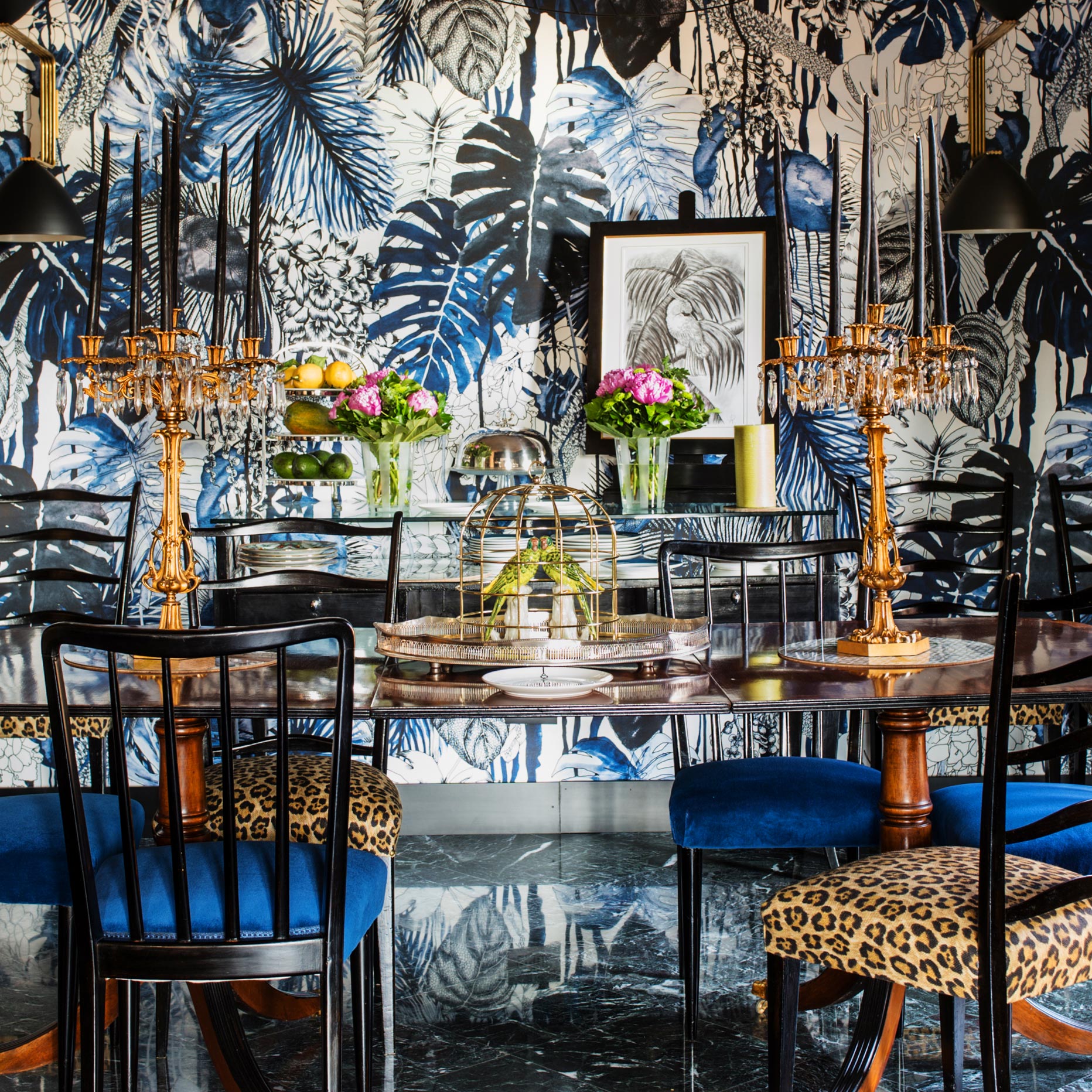 Florence, Italy
If we had a nickel for every pocket-sized jungle-themed luxury boutique hotel we’ve seen over the years, we’d have a grand total of five cents. Velona’s Jungle Luxury Suites is the only one of its kind, and much of that has to do with Velona himself. That’s Pasquale Velona, antique dealer and dear departed grandfather of the proprietor, Veronica Grechi — this hotel, just to the west of Florence’s busy city center, clearly contains generations’ worth of details. 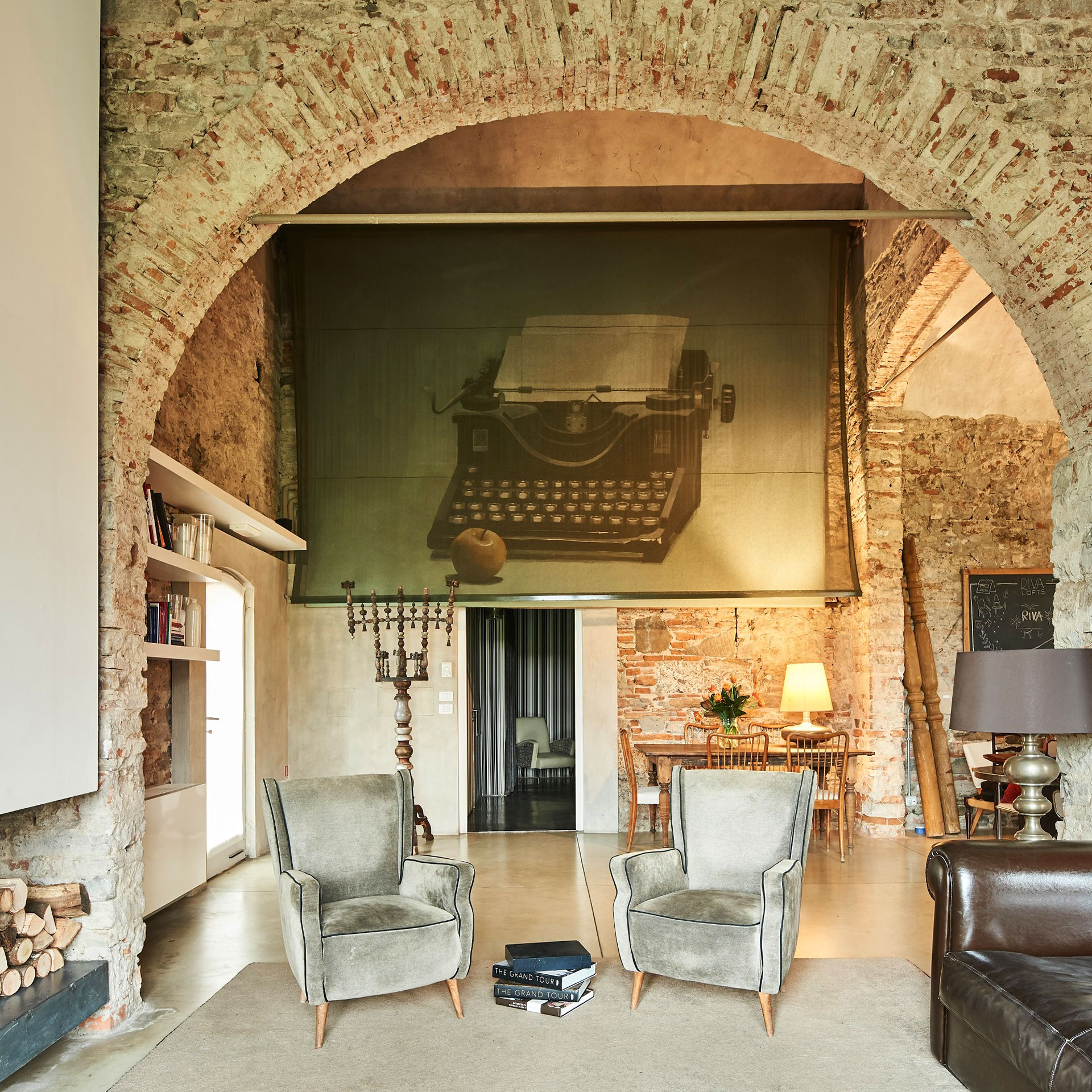 Florence, Italy
In Italy even the most modern hotel has hundreds or thousands of years of architectural history to deal with; one hypermodern hotel in Rome has a working archaeological site in the basement. By these standards, Riva Lofts is on the young side: this 19th-century complex on the banks of the Arno river has lived only three previous lives — a factory, artisans’ workshops, an architectural studio — on the way to its present incarnation, an immaculately designed ten-suite modernist luxury boutique. 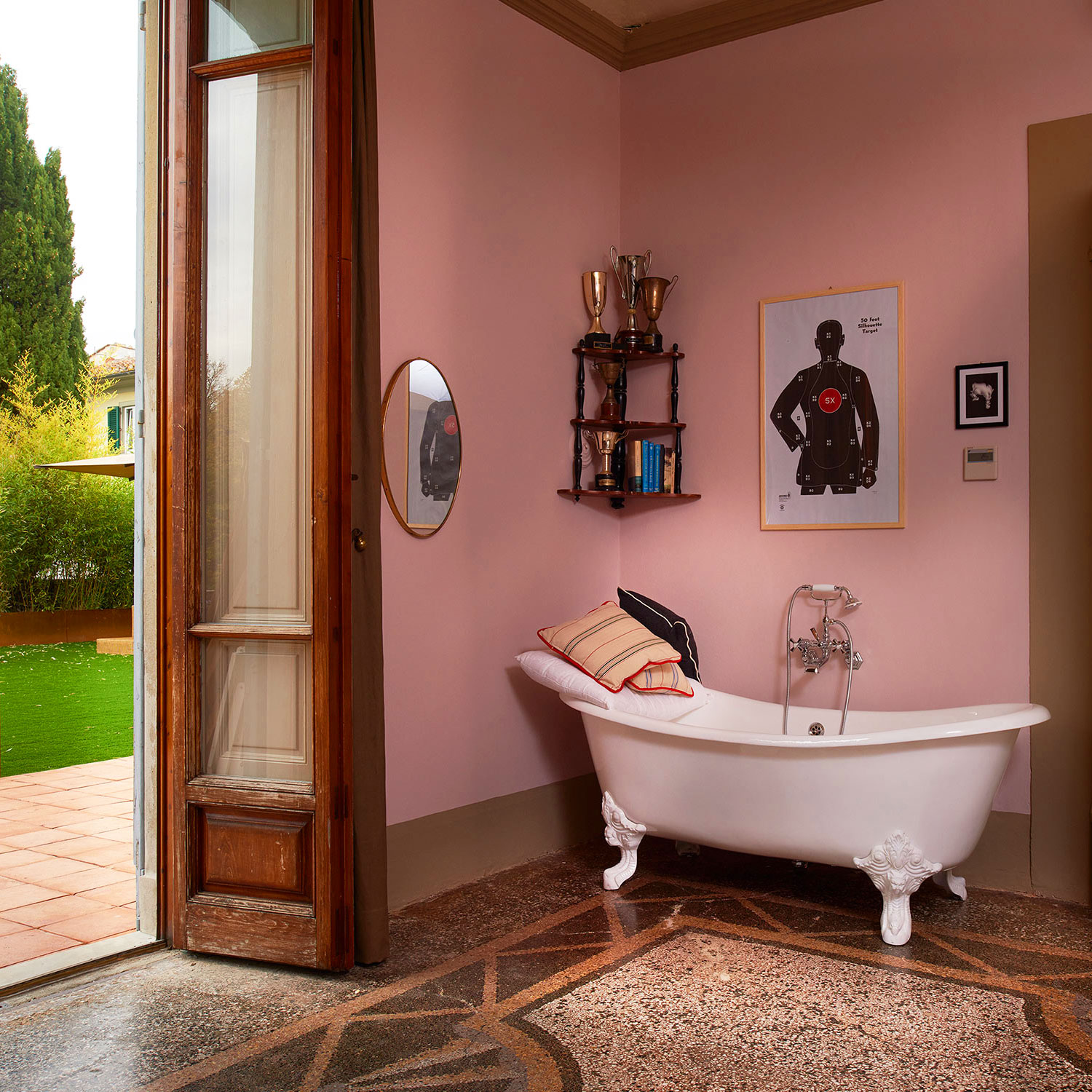 Florence, Italy
Ad Astra is a stylish bed and breakfast in the Oltrarno district, south of the river, overlooking the splendid Torrigiani Garden. In this less dense corner of Florence there’s space not just for massive gardens but for a “hôtel particulier” as well — a freestanding residence originally meant for aristocratic weekenders, comprising just nine rooms, each one unique and all of them decorated with the same playful, eclectic eye that’s responsible for Soprarno Suites. 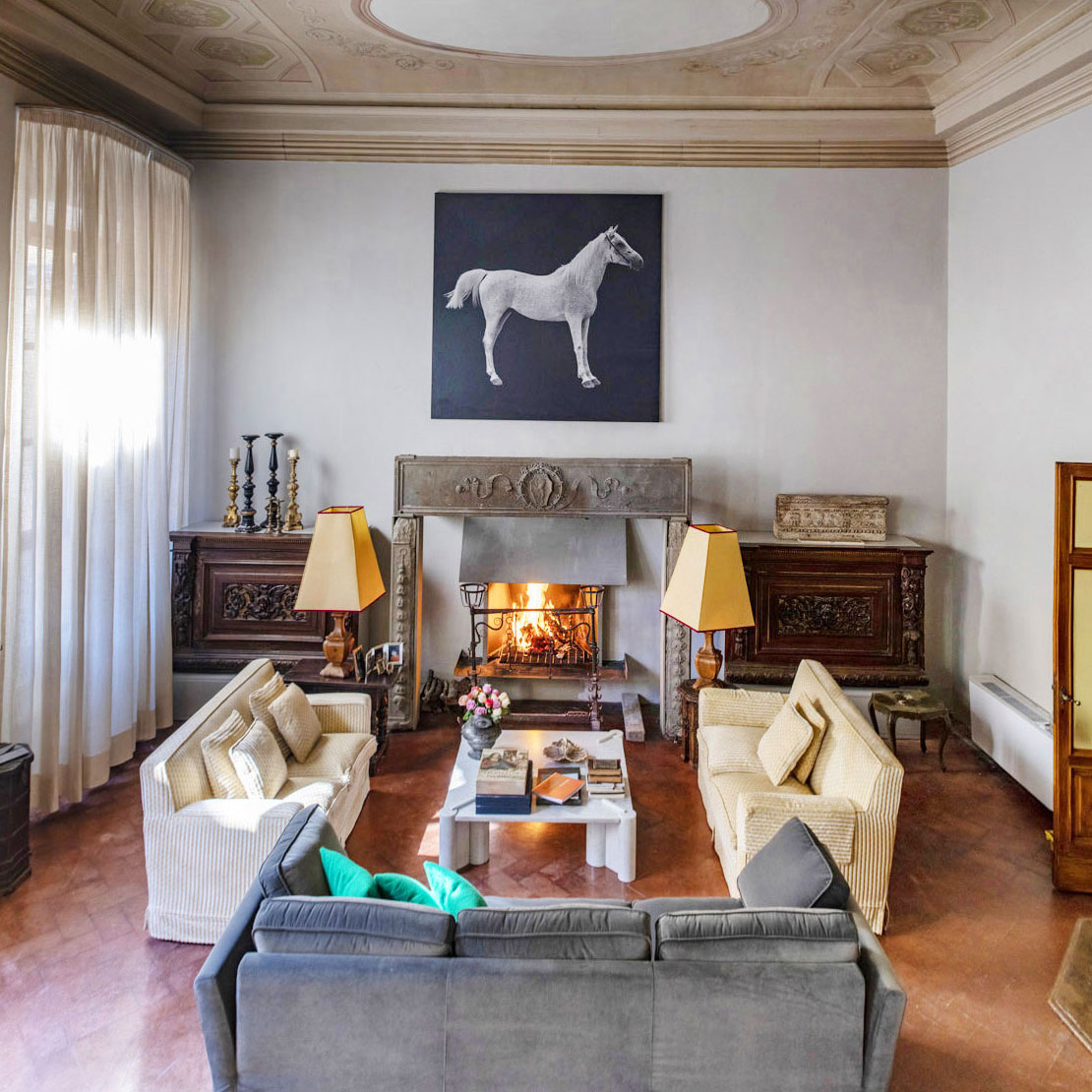 Florence, Italy
Hardly a hotel at all, Casa Botticelli in San Felice is a nine-room boutique in the heart of Florence. This well-crafted, fully realized, tiny little gem of a hotel is almost too good to be true — it’s an art gallery as well as a hotel, with many of its works offered for sale, and in terms of design it’s a fine example of the contemporary Florentine style, which unapologetically mixes elements from the fifteenth century straight up to the present day. 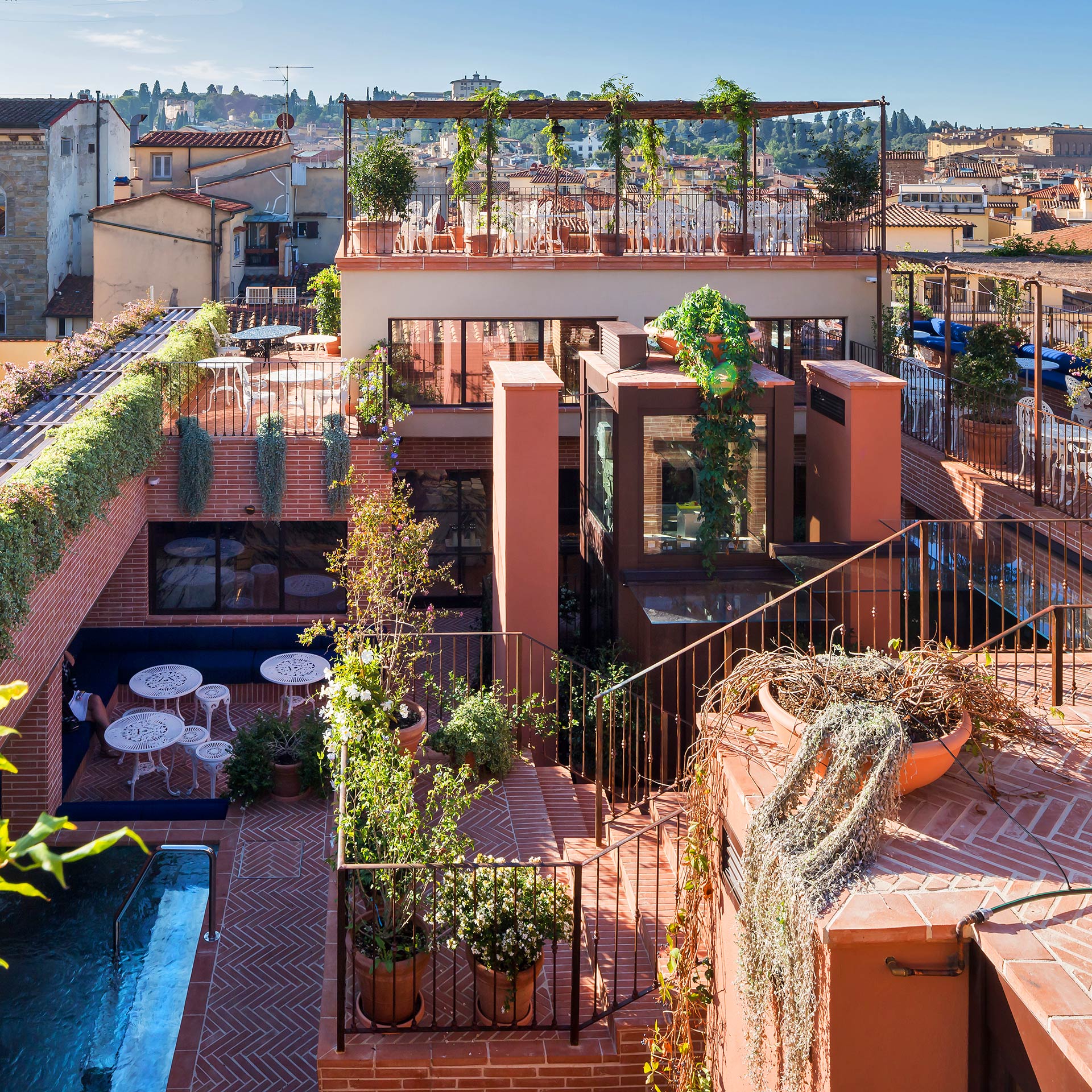 Florence, Italy
When it comes to the dramatic combination of old and new, there’s no one quite like Italy’s boutique hoteliers. In the case of Hotel Calimala, they’ve got an ally in designer Alex Meitlis, whose interiors here mix original architectural features like crumbling stone walls with custom-designed modern furniture and lighting. And of course they start with some pretty promising raw material: an ornate and beautifully weathered 19th-century palazzo in the heart of the city’s historic center. 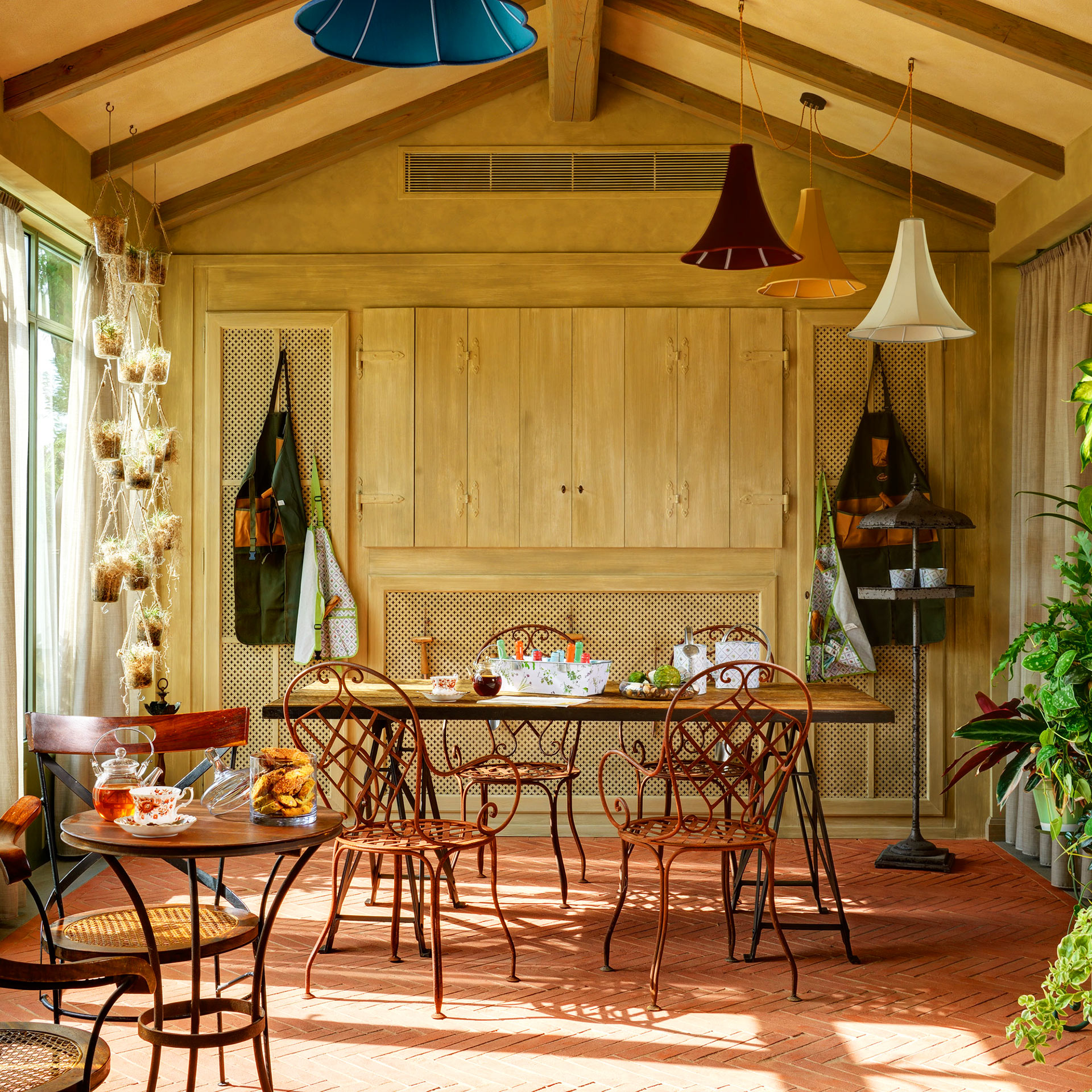 Florence, Italy
Thoroughly renovated the Ville sull’Arno may be, but anyone expecting a pure, strong dose of contemporary design has grasped the wrong end of the stick. This place is dedicated to fantasy, and period fantasy at that: here it’s all about the 19th century, the Romantic era, the days of the Grand Tour. The only question is how intense and eclectic you want the experience to be. 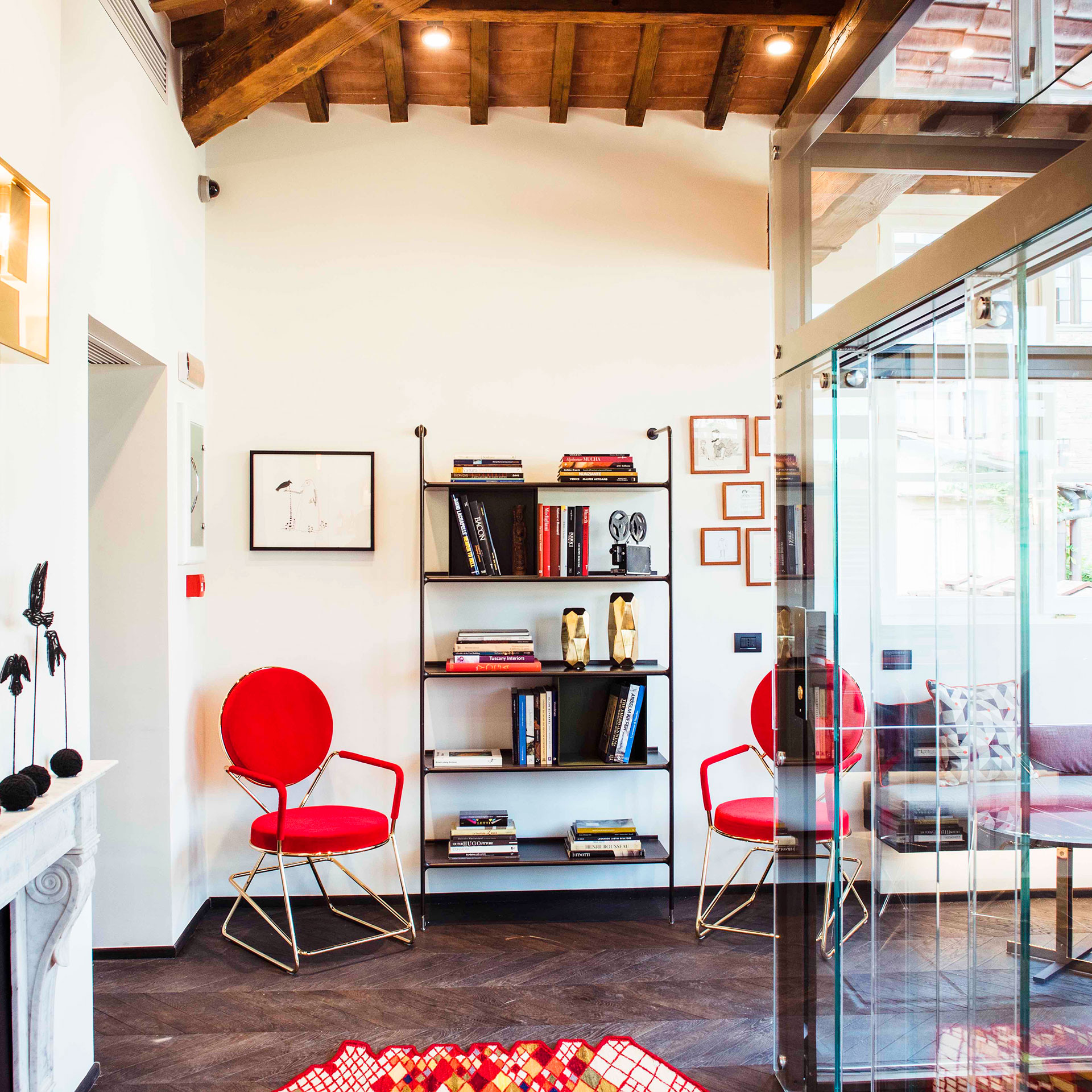 Florence, Italy
Allow us to present Hotel Milù, a 14th-century, 5-floor fixture on Via Tornabuoni. This 22-room boutique partakes of both antique elegance and contemporary panache. Each room displays a unique palette and carpentry profile, showcasing a slew of Italian-made furnishings, lighting elements, and objets d’art by esteemed production labels. The entirety of the hotel functions as a gallery of sorts, showcasing medium-spanning artworks by international visual artists. 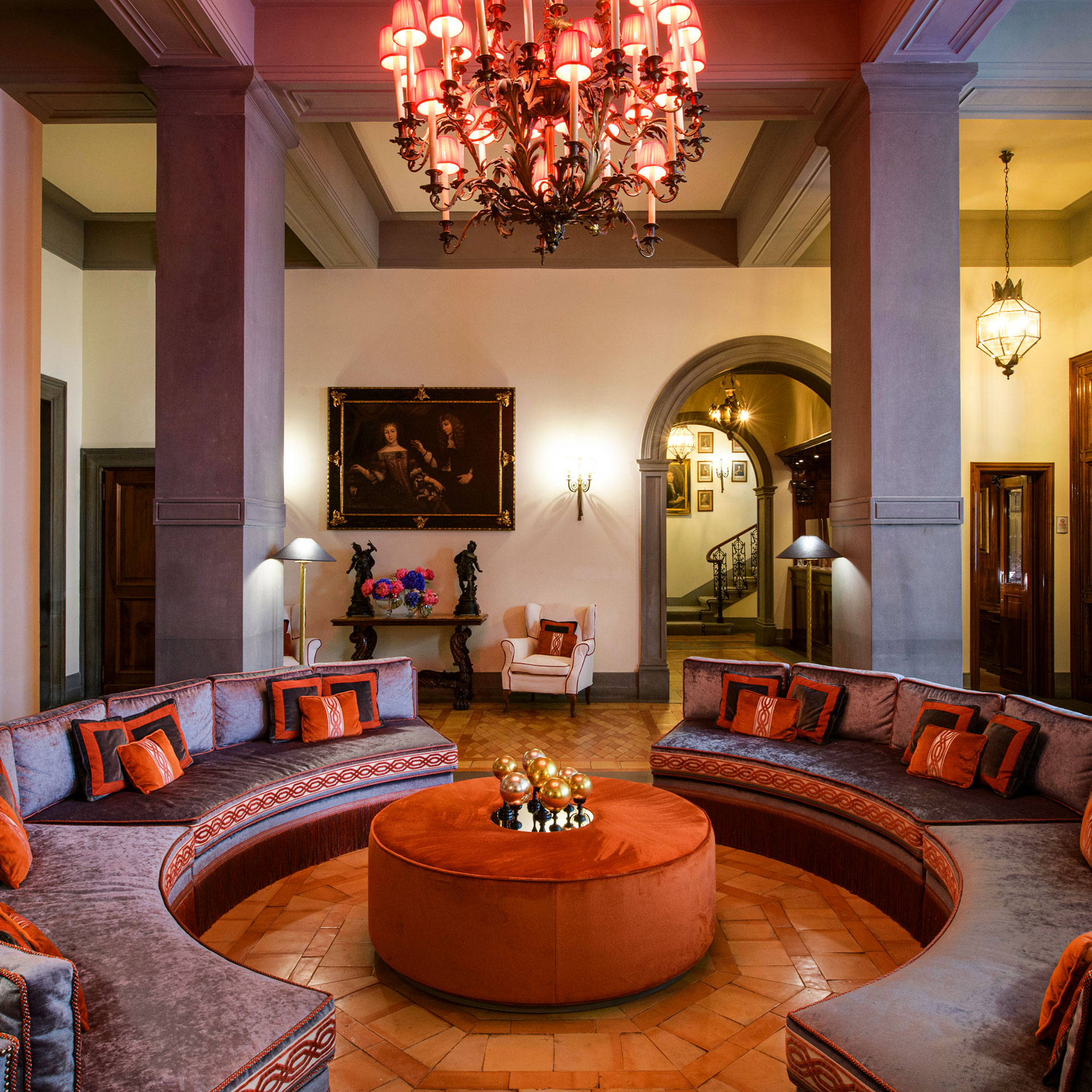 Florence, Italy
Helvetia & Bristol a five-star tribute to Renaissance-era grandeur, and a return to the days when Europe’s grand hotels were the envy of the world. While its atmosphere remains old-world in its inspiration, today’s Helvetia & Bristol is more historical tribute than faithful recreation. The addition, in 2019, of the adjacent Banco di Roma building marked the beginning of a new era; boutique-hotel trailblazer Anouska Hempel designed the 25 new rooms and suites, and a luxe new spa was installed as well. 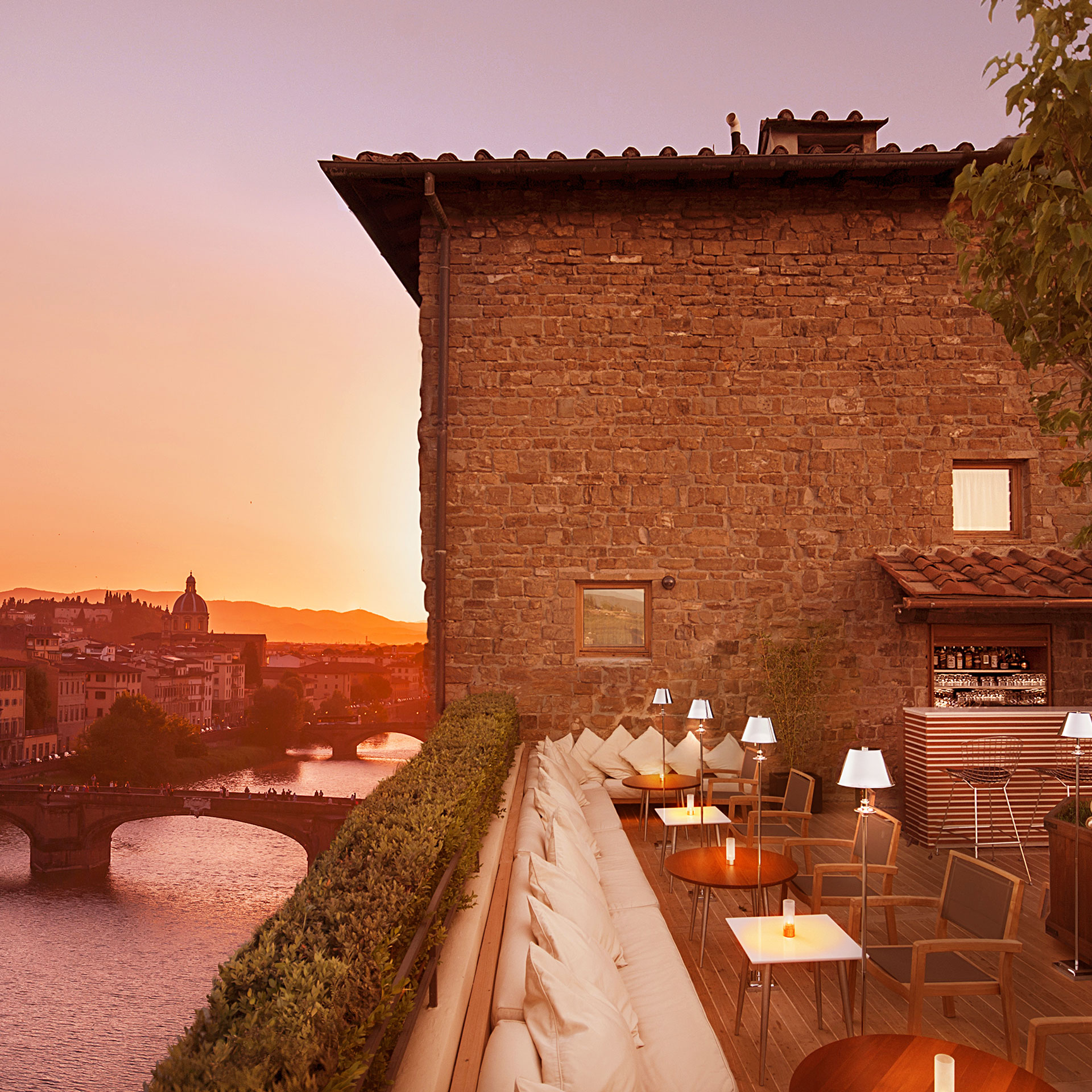 Florence, Italy
The Continentale hotel is a Lungarno Collection hotel, which means it’s a Salvatore Ferragamo hotel — but this is a hotel that is determined to win you over on its own, without coasting on a reputation earned in the fashion world. That said, the Continentale is not short on design. White is the predominant color, but architect/designer Michele Bonan includes unexpected accents of bubble-gum pink, intended to evoke the optimistic affluence of the Dolce Vita Fifties and Sixties.