The cool palate of Enoteca Paco Pérez in Barcelona’s Hotel Arts beckons, a beachy elevated reprieve from the city just a stone’s throw from the sea. And one evening this spring the entrance framed its owner, celebrated food auteur Paco Pérez, a warm contrast as he clasped the hands of entering diners before eventually retiring to the kitchen, where he would then prepare dishes for the tasting menu that night.

It’s a scene that is a bit unusual. Not just that such a decorated chef would be out greeting guests, but that Pérez, of his eponymous two-MICHELIN-starred Enoteca—as well as two-MICHELIN-starred Miramar in Llançá and one-MICHELIN-starred 5-Cinco by Paco Pérez in Berlin—would actually be in the kitchen. However, it’s this work ethic that has been driving Pérez from childhood food aspirations in the small seaside town of Llançà, to a ‘self-made’ leader of Spanish gastronomic cuisine. Today diners make pilgrimages to taste his Catalan dishes, and little by little he’s also doing his part to close the distance. Last year Pérez added Tast in Manchester, England, to his portfolio, with an additional secret project in Mexico that he is reluctant to discuss just yet. But the influence is already being incorporated into his menus: One starter on Enoteca’s tasting menu utilizes avocados found in his Central American travels. 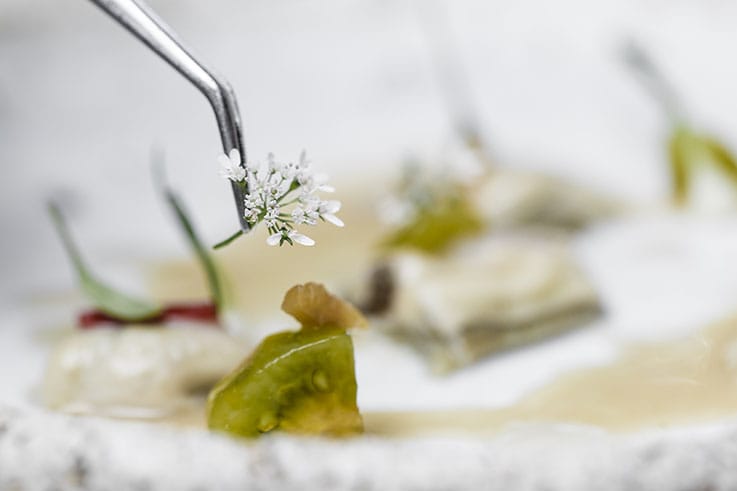 That Pérez eventually settled in Spain is a matter of romance. The young boy who at 12 discovered his passion for cooking while working in his family’s tapas bar, continued on to France to study with Michel Guèrard, a forefather of nouvelle cuisine, which prizes above all fresh ingredients and presentation. His studies were interrupted when called back home for military service, and plans to return to France were thwarted when he became enamored, both of a 1939 beachside guesthouse and restaurant named Miramar, and of Montse Serra, the daughter of its owners who would later become his wife. Pérez and Serra slowly transformed the Miramar space in a small fishing town into a destination restaurant with five exclusive rooms while Pérez rounded out his studies, which included connecting with Ferran Adrià at El Bulli.

At Enoteca, Pérez applies gastronomic techniques to dishes that he describes as “Mediterranean with an international flair.” But more than a vague flashy theme, Pérez’s ingredients are personal and thoughtful. Take the red mullet starter, served alongside a bulbous mimetic of mussel and the aforementioned avocados, and with which he has an almost biographical connection. “Red mullet is a kind of fish that means a lot to me, I find it interesting,” he says. “Because the red mullet is a fish that, [a] few years ago, any MICHELIN-starred fine-dining chef did not want to cook. Nowadays we cook it with really elegant techniques like blossom water.” Other dishes like a duck tartare tapas starter have a more physical grounding. “The duck comes from Figueres, near Llançà, in combination with hoisin, a sauce that I fell in love with when I visited China.” 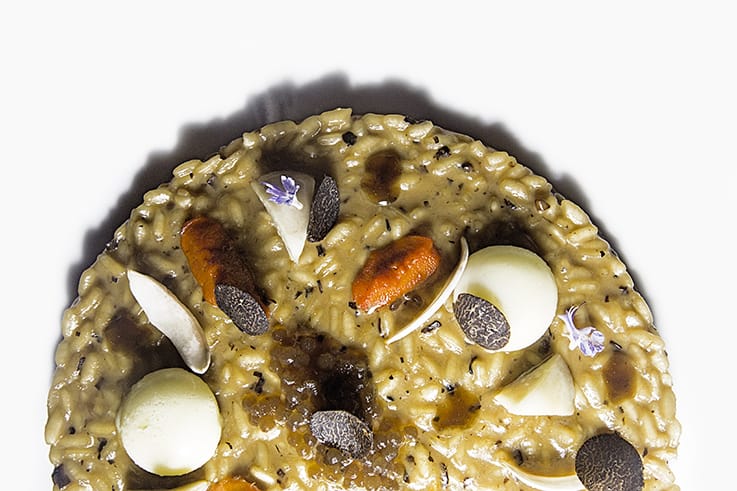 Creamy rice, mushrooms, sea urchin and truffles is one of Pérez's favorite dishes on the menu.

And Pérez’s two favorite dishes on the menu illustrate the past and future of the restaurant. A creamy rice with truffle and sea urchin recalls the landscape “mar i muntanya” (sea and mountain) dictate of Catalan cuisine. “People who know me very well know that Miramar—my home, my headquarters, where my laboratory started more than 20 years ago—[is a] a humble rice and tapas restaurant,” he says. “We [combine] the most elegant ingredients from the sea, sea urchins, [with] the ones from the mountain, our ‘melanosporum’ truffle, in creamy rice that needs a good technique and patience to be prepared.” His other favorite, white carbonara “espardenyes,” utilizes sea cucumbers, or “sea slugs,” another ingredient once consumed mainly by poor Spanish fishing villages that is now a highly-prized delicacy.

It’s also a point of pride for Pérez. “We created this dish for our 10th anniversary at Enoteca that happened in November 2018,” he says. “People need to understand the high quality of the seafood, fish and mushrooms that our land is providing. Espardenyes is the way to do it.”

The "master carver" has worked with the prized item for over a decade.