The Basque Country: wedged between Spain and France, this is a land rich in history. Here, the people pride themselves on preserving their unique local culture despite constant pressure from their powerful neighbors. Food remains the most vibrant manifestation of their identity.

After a long period of anonymity, the Basque Country made a splash in the culinary world—its strong cooking tradition has been embraced by gourmands with great enthusiasm. Take San Sebastián, the region’s coastal capital. The resort town alone boasts three three-Michelin-starred restaurants.

The origin of the Basque Country dates back centuries, when residents lived off their livestock on the Pyrenees mountains. As they moved seaward, marine activities became an integral part of Basque culture. The vessels that Columbus employed for his American conquests were partly produced in the region. The terrain provided the Basque people with lavish bounties, and they knew how to make use of it.

Salt cod, now a mainstay in many Mediterranean cuisines, came from Basque Country. The fish was available in the region in large quantities, so much so, that after the locals sold a great amount to the rest of Europe, there was still enough for them to preserve for later consumption.

Salt cod can be found almost everywhere in the area, typically in the form of pintxos, or, Basque tapas. It even made its way to the sailing ships to the Americas, constituting a crucial part of the sailors’ diet. The alcohols made in the region are just as fine—varieties of Txakoli and Sargadoa are perfect pairings for local dishes. 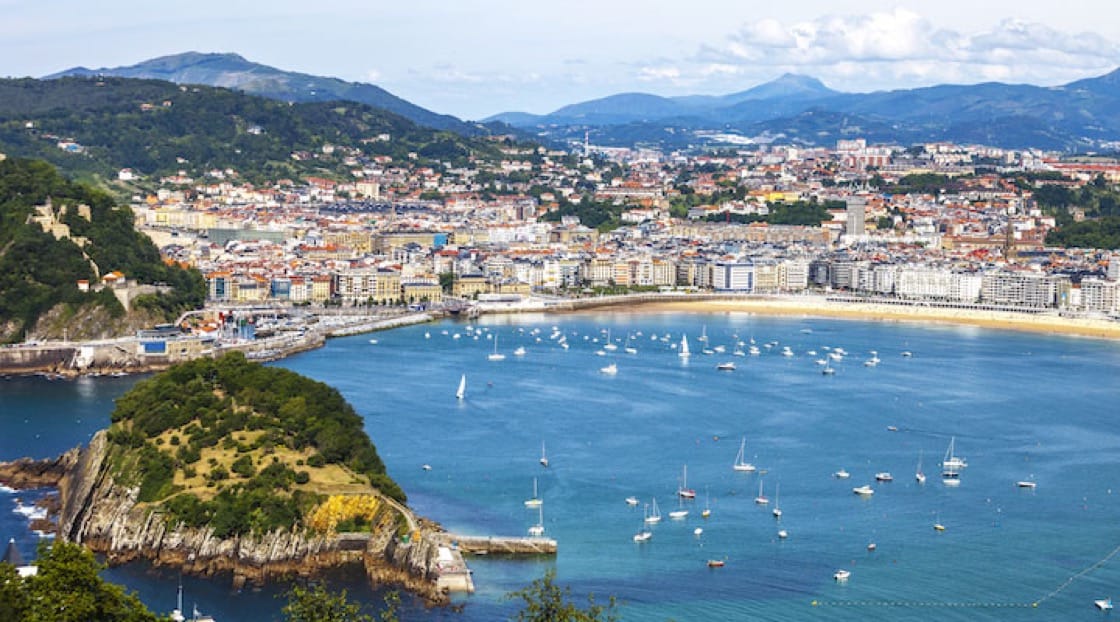 Such a captivating gastronomic tradition finds a refined expression at one Michelin-starred Nerua, led by chef Josean Alija. The restaurant is situated inside the Guggenheim Bilbao, a modern art sanctuary in Spain. Architect Frank Gehry especially adopted a streamlined look and metallic finish on the museum to echo the native steel and shipbuilding industries.

“We’re in an exceptional environment. Good interior design elevates the dining experience. But I’m also conscious in developing my character in the food I make,” Alija says.

Indeed, the chef’s individual touch is what comes to define Basque cuisine these.

“Basque cuisine is all about seasonality and locality,” Alija continues. “We’re close to our suppliers so we know everything about the ingredients. And how the chef approaches produce is the soul of the restaurant; it’s the language we use to convey our gastronomic vision. While we all draw inspirations from the same tradition, we come up with original interpretations. After all, one thing never changes—we stay true to the ingredients and our identity.”

The Treasure Chest of Basque Ingredients

If the kitchen is a chef’s paintbrush, the ingredients of the Basque Country make up the best paint one can find on earth. “There are so many ingredients that are unique to this country, like lágrima peas, kokotxas (the gelatinous part of cod head) and barnacles. And, as a chef, our job is to distinguish when’s the best time to use an ingredient. We adapt to the change of seasons—my restaurant divides the years into three main seasons: spring, summer and autumn/winter. We usually research and prepare the menu for the next year during the same season. In a way, the farms, fishermen and nature decide what we make,” says Alija.

New Basque Cuisine was born under the influence of Nouvelle Cuisine in France in the 1970s. A lot of thought went into revitalizing traditions like pintxos using new ingredients and cooking methods.

“New Basque Cuisine strives to create an all-encompassing experience with quality food, atmosphere and service. It is a springboard for avant-garde cuisine and restaurants. These places transformed how a restaurant was run. This helped people understand molecular gastronomy and other new food cooking styles,” says Alija.

The Basque chefs’ inventive style is built on a solid foundation. Every move is justified by days and weeks of research, and it all comes down to the most basic. “Technique and knowledge to ingredients are the most valuable assets to chefs. It’s in the blood of every Basque chef to share this knowledge to the world,” notes Alija.

“At Nerua, we spend lots of effort to come up with something creative that improves the guests’ dining experience. Through this research and development process, we gain important information to share with the diners. For instance, we analyze more than 30 kinds of broth each day.”

“And as I said, seasonality takes priority in our kitchen. After we decide on the best produce to feature in that season, we need to forge a deep understanding of them through anthropological, historical, organoleptic, sensational perspectives. Only then we can make the most of these ingredients to prepare intriguing and healthy dishes.”

With a generous bounty of great produce, generations of experience and an adventurous spirit, Basque cuisine has a rightful spot in the upper ranks of the gastronomic world.

This article was written by Tang Jie and translated by Vincent Leung. Click here for the original version.