Erik Anderson and Gavin Kaysen have a lot in common. Both having grown up in the Midwest (Anderson hails from Chicagoland; Kaysen grew up in both Chicago and Bloomington, Minnesota), the two have spent a formidable amount of time working for top toques (think René Redzepi and Daniel Boulud) before ultimately running kitchens at some of the country’s greatest restaurants. (Anderson is currently executive chef of two-MICHELIN-starred Coi in San Francisco, and Kaysen runs the very successful Spoon and Stable and Demi, both in Minneapolis.) Needless to say, the two are each culinary titans in their own right.

On June 29, Anderson is returning to the Twin Cities to cook alongside Kaysen and Demi's executive chef Adam Ritter for an exclusive multi-course collaboration dinner.

The dinner has been in the works for well over a year. “We talked about Spoon and Stable, but Demi makes more sense—it’s what we want to give. We give a MICHELIN type of experience here,” Kaysen says. “You basically have one guest per employee.”

Having previously worked at Minneapolis’s The Grand Cafe prior to decamping to Coi, Anderson is no stranger to the ins and outs of Minneapolis and St. Paul. Kaysen says that when the time came to plan the dinner it made sense to have “one of their own” and wanted to bring Anderson in for his previous Midwestern experience. “When Coi got its two stars—or when anyone from the area gets that kind of accolade—it’s about the opportunity to cook together and creating it around such a prestigious brand where eyes are a little different on you.” 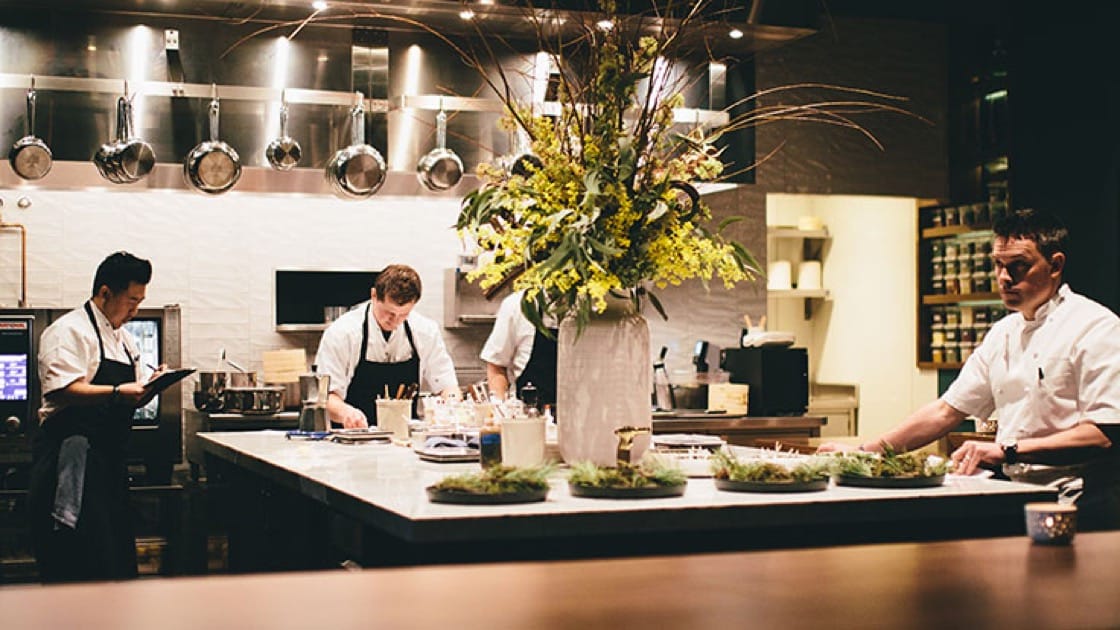 The kitchen at Demi. (Photo by Libby Anderson.)

Guests can expect some of Anderson’s classics, like quail and Dungeness crab terrine. “Brent [Wolfe, of Wolfe Ranch near Vacaville, California] loves quail—to me it’s the greatest protein in California right now, and to be able to have these birds that Brent’s been raising since high school is great,” he says. (Meanwhile, Kaysen’s dishes are still in the works.)

As such, let’s talk about the Twin Cities—sure, the area is well-known for bomb-ass Juicy Lucy sandwiches, die-hard Vikings fans and fiercely cold temperatures, but the area’s dining scene has certainly been blossoming for the better part of a decade-plus. “I spent years [here] before I left for San Fran,” says Anderson. “It’s changed so much. . . . I think people are really pushing and doing incredible things [here] right now . . . and I think Gavin is a huge part of that.”

Kaysen believes that it’s the clientele that continue to drive the local restaurant scene. “They are letting us create the food that we want to—there’s a demand that’s being created,” he says. “When people think of the Twin Cities, they think of Siberia, and when they get here, they’re pleasantly surprised. They don’t think there’s a food scene [here].”

“You look at the Thomas Kellers and the Daniel Bouluds before us—what have they done for our generation? They created opportunities for us to travel around and cook at restaurants in Singapore, New York, Hong Kong, Paris,” he continues. “It made us go back to our cities that we grew up in. There’s a lot of [fairness and equality] that everyone is looking at across the board, from pay, to men and women in the workplace. There’s also this really striking obvious reality that these chefs are moving back to these market cities and they’re opening up really great restaurants.” No doubt because these days travel is easy. “It opens up the whole [world of cuisines]. The food scene is continuing to evolve.”

Keep on, keepin’ on.

Reservations are now live for the Michelin on the Road collaboration dinner with Gavin Kaysen, Erik Anderson and Adam Ritter—reserve your seat on Tock today.