Baking is in François Payard's blood. He is a third generation French pastry chef, born in Nice, reknowned for transforming traditional desserts into exquisite plated presentations. He grew up surrounded by classic French pastries, but loved playing mechanic when he was young.

"I was always fixing my motorcycle! But then I realized I had more talent for baking and the rest is history," Payard says.

His grandfather had his own pastry shop, Au Nid des Friandises, on the Riviera. Payard's father was also a pastry chef and the family ran the shop for 55 years. (The shop is still open today, but has since been sold by the family.) They made pound cake, chocolate cake, gâteau St. Honoré and Paris-Brest (a French dessert made of choux pastry and a praline flavored cream invented to commemorate the Paris-Brest bicycle race). As a child, Payard would sometimes help his grandfather make chocolates.

"Baking has been in my family for generations. I was influenced from an early age to work in the restaurant industry, since my dad and grandfather were pastry chefs. And now my brother is one too! I was always around classic French pastries, a tradition carried on by my family for over fifty years," Payard says.

After years of learning pastry in his family's kitchens, Payard moved to Paris when he was 20 years old in 1986. He took sugar and cake classes at the Bellouet Conseil to get more professional experience. His first role as a pastry chef was at La Tour d'Argent in 1988 (which holds one MICHELIN star today) when he was just 22 years old. Following La Tour d'Argent, he went on to the kitchens of Alain Senderens at Lucas Carton, which currently holds one MICHELIN star as well.

"It was a very good experience that taught me a sense of respect, structure, discipline, focus, concentration and organization," Payard says of working at MICHELIN-starred restaurants at such a young age. "It made me the successful chef I am today."

But it was his desire to travel and discover a new culture that brought him to New York in the early 90s. He began his career as the pastry chef at Le Bernardin. It was here where Payard became known for his beautifully presented creations and experimented with new ideas, flavors and techniques. Payard joined another lauded kitchen in 1993 with the opening of Daniel, where he was known for his chocolate and seasonal fruit menus.

He opened Payard Patisserie in 1997, widely considered one of Manhattan's most upstanding culinary destinations over the course of its 12 years. It was particularly famous for the New York, New York cake with the New York City skyline on it, as well as the Chinon pastry (a pistachio dessert cake made with layers of nut meringue and whipped cream on a buttery biscuit base with cherry gelée) and the Louvre chocolate cake. Payard has opened bakeries and patisseries at Caesars Palace in Las Vegas, as well as multiple locations in Manhattan, Japan and Korea, in addition to having authored several cookbooks.

Now, he leads pastry at Brasserie Estuary and Ebb & Flow at the ONE°15 Brooklyn Marina, which opened this summer. His program is already making waves with its seasonal savory tarts like Japanese eggplant and plum tomato, Portuguese sardines and tomatoes, and Maine scallops and leeks fondue. His reinterpretation of the classic American layer cake—white chocolate, strawberry and Froot Loops—was created "for the kid inside everyone." 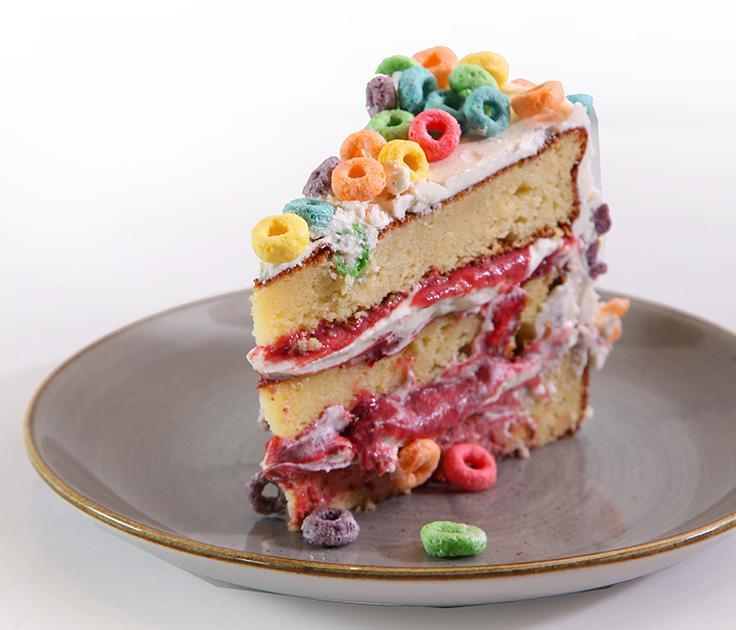 Payard's reinterpretation of the classic American layer cake—white chocolate, strawberry and Froot Loops—was created "for the kid inside everyone."

What was the last thing you ate?
The last thing I ate was seared scallops with celery root purée, Brussels sprouts and a mushroom vinaigrette. This is something that I workshopped in terms of home cooking, but will introduce this fall at Brasserie Estuary.

It's your day off. What do you have for breakfast and where?
I love eggs! I like to go downtown in New York City to find new places to check out, but Little Frog is one of my favorites. The dish I order at Little Frog is simply called "three farm eggs any style." Sometimes, I order this as a French omelet with chives and papas bravas, sometimes as a scramble and sometimes just sunny. Right now is the high season in terms of pasture, and these are beautiful pasture-raised eggs that are great au natural with minimal accoutrement. There's a beauty in how simple egg dishes are.

Controversial question: Do you believe in brunch?
Brunch is great! It's so American and it's always what people want to see. I used to love the all-you-can-eat caviar brunch at the Waldorf Astoria, but now I go downtown to Augustine and order the French toast. Keith McNally has always managed to nail pain perdu at all of his establishments.

What is your 2:00 a.m. go-to food?
Pizza. But only with a thin crust, like the ones at Giorgione on Spring Street. I like both the bianca primavera as well as the traditional margherita. The pizza at Giorgione reminds me of what you would get in Nice. It's somewhere between American pizza and flatbread.

What is your local coffee shop and what do you order?
I only drink specialty coffee and my go-to is La Colombe. I start with espresso and then go to a cappuccino.

Where do you dine when you travel to your favorite city?
Of course, I really like visiting Paris, and Racines is where I go every time I'm there. They have an incredible wine list with unfiltered natural wine, which isn't so typical in Paris. I always go for the blackboard plats du jour, known simply as "the daily menu." The Paris menu has a little bit of a different format than the Tribeca location of Racines. The last time I was at Racines Paris I had turbot. In terms of wines, they have a vast selection of Burgundy. I frequently order white Burgundy.

What is the "laziest" meal you put together for yourself this past week?
The laziest meal I made this week was cacio e pepe. It takes no time to make since it's just pasta, cheese and pepper, but delicious every time!

What is your favorite snack food?
Pretzels and milk chocolate—I love the salty and sweet combination. Specifically, I like to use Valrhona Caramelia with whole wheat pretzels so it's a little tart, savory, crunchy and sweet.

What do you eat when you want to treat yourself?
If I want to treat myself, I like to go to a nice steakhouse for a big rib eye with a guilty pleasure side like creamy spinach or macaroni and cheese. I definitely can't have that stuff every day, which makes it special!

Eating Off Duty with Fredrik Berselius