“I'm extremely passionate about [Oaxacan food] and have so much love for the food, culture and people. I think Oaxacan food is one of the great cuisines of the world, so any part I can play in raising awareness for it makes me happy,” says chef T.J. Steele of Claro in Brooklyn.

Steele was born into an Italian family in New Jersey, where he grew up cooking next to his mother and grandmother. His older brother owns and operates a building supply company, while his sister is a stay-at-home mom. As early as middle school, he preferred the kitchen to the classroom, and started as a dishwasher when he was just 12 years old. His parents owned a local country store in Upper Saddle River, New Jersey, when he was a young teenager, which put him in a fast-paced food environment that attracted him to the idea of working in the culinary industry. Steele says he never wanted to be anything other than a chef.

“I immediately felt a sense of place in the kitchen—it didn't matter who you were, your age, your background, etc. Plus it combined all the things I love—fire, knives and food,” Steele says.

Steele attended The Culinary Institute of America and moved to New York City in 2002. Within three years he was made executive sous chef at Danny Meyer's Union Square Cafe. At 25 years old, he was the youngest to hold that position in the restaurant's history. During this time, he immersed himself in international cuisines—whether in the far-flung boroughs of New York City or in Spain, where he started to make annual pilgrimages to eat.

But Steele’s love story with Mexican food began during a visit to Guadalajara as a teenager. He became enamored with the cuisine, culture and people. He fell hard for Oaxacan cuisine during a culinary research and development trip in 2006, which changed his gastronomic trajectory. He first immersed himself in Oaxacan mezcal and began his own artisanal mezcal line under the name El Buho Mezcal—which is also served at Claro—working with the Jimenez family in Oaxaca who are 5th generation mezcaleros.

He continued to visit and work in Oaxaca for many years until joining tapas restaurant Tia Pol in New York City in 2010. After two years as kitchen manager, Steele's attention once again turned towards Mexico. He left Tia Pol in 2012 and went back to Oaxaca, setting up a residence there to study, eat and travel.

“[I’m drawn to Oaxacan food] because of the flavorful homestyle cooking,” Steele says. “It feels timeless, completely true to itself. When I'm there, I'm fully immersed in the food, culture, environment, etc. It feels like everyone's an artist there, everyone has some sort of craft and they all put so much love into what they do. They share it and they do so with pride, it's special.”

Steele then set off with the goal of opening his own Mexican restaurant in New York City. In the summer of 2017, he opened Claro, the Oaxacan-influenced restaurant in Gowanus, Brooklyn, with an emphasis on seasonal cooking around corn, barbacoa, consommé and mezcal using local ingredients. The restaurant reflects Steele’s time spent in Oaxaca and the community of craftsmen, cooks, farmers and neighbors that have become family to him over the past dozen years. At the restaurant, Steele is dedicated to making everything by hand, including cheese, chorizo, moles and, of course, masa.

“[Earning a MICHELIN star] started a conversation about Oaxaca and Oaxacan food, with diners coming from all over with a true curiosity for the cuisine.”

Some of the most recognized dishes at Claro are the tlayudas made on the outdoor clay comal and wood-fired grill, tuna tostada, seasonal aguachiles and the moles. The backbone of Claro is the masa program. Masa is corn dough that comes from ground nixtamalized corn. It is used for making corn tortillas, gorditas, tamales, pupusas and many other Latin American dishes. The restaurant hand sources and self-imports non-GMO, ancestral landrace corn from organic farmers in Oaxaca.

Currently, Steele is working to expand his masa program in New York and open another restaurant concept focusing on mariscos (seafood). El Buho Mezcal is available in over 20 states as well as internationally—and growing.

The following interview was conducted in fall 2019. 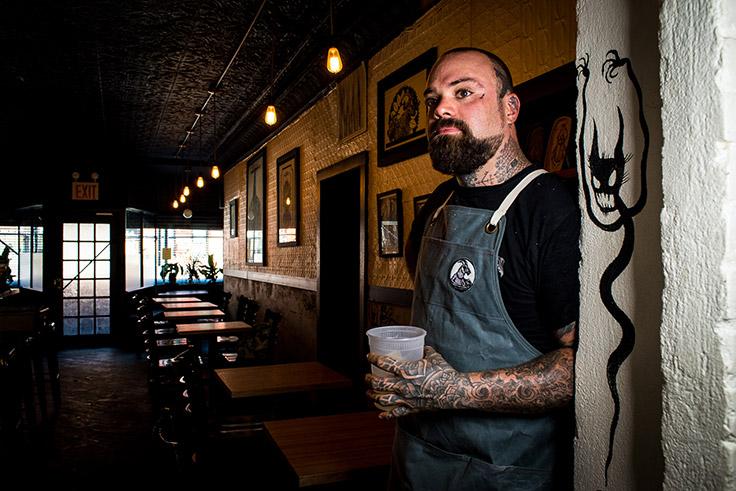 What was the last thing you ate?
A BLT tlayuda that I made during service at my restaurant. The BLT version has Benton's bacon, Eckerton Hill Farms tomatoes and wild watercress. It shows up on the menu at Claro whenever tomatoes are in peak season. I'm always for mezcal as a drink pairing.

It's your day off. What do you have for breakfast and where?
I order one of the big smoked salmon platters and caviar service at Russ & Daughters, along with a Bloody Mary and gluten-free bagels. Growing up around New York, I loved bagels and lox. Now that I have a gluten allergy, I love that I can go there and still get that fix.

Controversial question: Do you believe in brunch?
I do believe in it, although now with the restaurant, I'm usually working it. I split my time between New York City and Oaxaca, and lately I've been enjoying going to La Cosecha, the organic market in Oaxaca. I like it because there are a bunch of different vendors and I can get my favorites from each. I usually go with a soup, molotes and garnaches.

What is your 2:00 a.m. go-to food?
At 2:00 a.m. in New York City, I'm usually asleep these days! But I am often awake later in Oaxaca and there it has to be Lechoncito de Oro. I get tacos with a mix of meat and extra chicharrón, I like to get the sauce on the side so I can get just the right heat. I've spent so much time at that taco truck that they gave me an official uniform!

What is your local coffee shop and what do you order?
I don't really drink coffee.

Where do you go when you travel to your favorite city?
Of course, it's Oaxaca. My favorite restaurant at the moment has got to be Doña Luchita. They make tlayudas with a killer beef chop (chuleta de res) and have really fun offals as well. It was a street stand that recently expanded and now it's in an old parking lot, all outside with a grill and some folding tables.

What is the "laziest" meal you put together for yourself this past week?
We make turkey tinga at the restaurant and I take the plain steamed turkey before it's sauced and spiced, add tomato and mayo, and wrap it in a tortilla to have my gluten-free version of a turkey sandwich. It's very nostalgic for me and it makes me happy, I love turkey sandwiches!

What is your favorite snack food?
To me, a snack is often what someone else would consider a whole meal. My go to is some sort of soup. In New York, I'm usually partial to pho, and in Oaxaca I can't get enough consommé. I’ll go to Pho Grand, Pho Bang, Pho Bar and Madame Vo in New York City.

What do you eat when you want to treat yourself?
I love a good omakase and I'm also a sucker for a cliche Champagne and caviar situation. I really like Sushi Katsuei in Park Slope and Shuko in Greenwich Village for omakase. I like getting caviar at Russ & Daughters, they have a great gluten-free blini and toast points. My other favorite is do-it-yourself. I order caviar and eat it at home with potato chips while watching bad television.