Today, May 30, Ellia and Junghyun 'JP' Park open Atomix, a fine-dining Korean restaurant in New York City's NoMad neighborhood. This is a followup to the pair's first venture, Atoboy, where inspectors say "together with his wife, Ellia, chef Junghyun Park wows diners from start to finish at this Gramercy hot spot with their unapologetic love for Korean food."

In comparing the sibling restaurants, "Atoboy is a more casual and fun place," JP says. "It's more about my past experiences." The chef has worked in a number of countries, learning a variety of different types of cuisines, and Atoboy is where he is able to blend some of those influences with Korean food. At Atomix, there's a focus on high quality ingredients and it "is more of an educational place to teach people about Korean food and culture."

WATCH: Behind the Bib at Atoboy 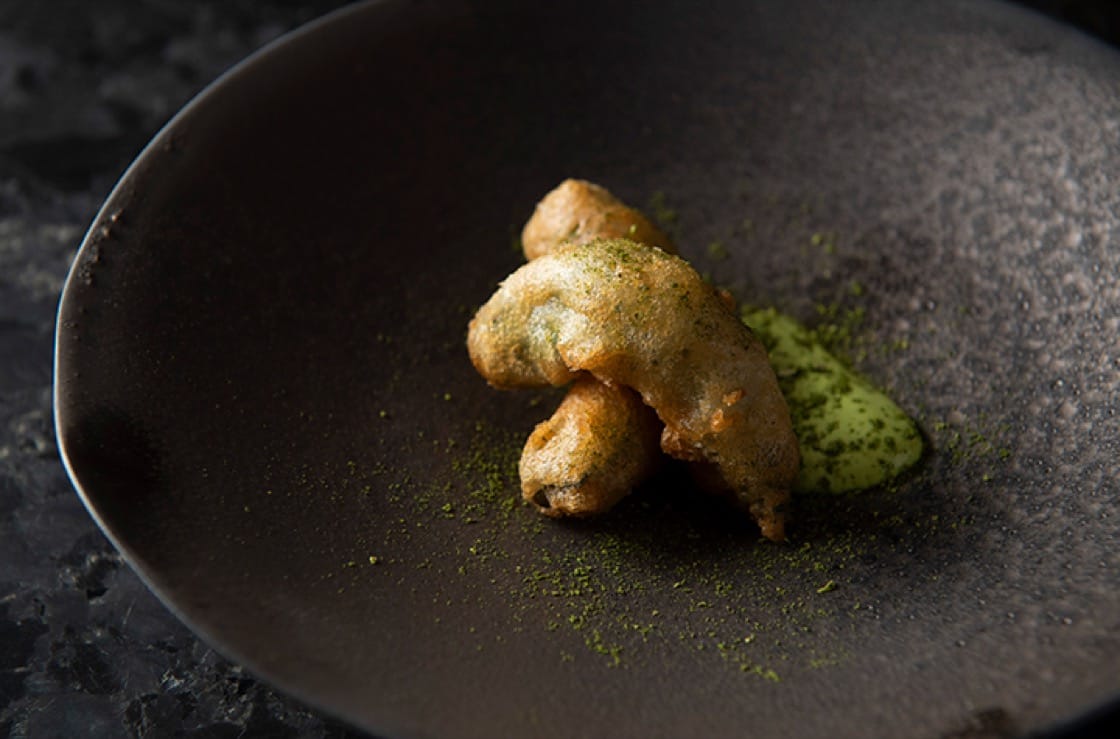 When guests enter the unassuming row house on East 30th Street, they are welcomed by the sleek, minimalist style. The interior, designed in collaboration with Younglae Kim, features muted grays, wood and black accents. The first floor bar and lounge welcomes guests for cocktails and à la carte snacks. The main event happens downstairs, where diners are treated to snacks in yet another lounge area before sitting for an $175 per person 10-course tasting menu. The 16-seat U-shaped chef's counter puts JP in centerstage to serve two seatings, five nights a week.

The first floor bar and lounge at Atomix. (Photo by Evan Sung.)

The menu is split into eight savory and two dessert courses, plus a number of seasonal rice and banchan pairings with some of the dishes. In talking about the creative process behind the menu, JP shares "I'm trying to balance fresh ingredients and the fermented flavor Korean cuisine is known for." One of the debut dishes is hoe, a raw fish platter consisting of sea bream that has been marinated in tangerine sauce and then aged for one day, as well as sea urchin, tangerine vinegar sauce, mustard kimchi, spinach, soy sauce gel and chrysanthemum. (Watch the video below for more info about this dish and the restaurant.) Each course is plated on series of handcrafted dishes from a mélange of prominent Korean ceramic companies and ceramists, and diners choose from the couple's personal collection of chopsticks that they have spent years accumulating.

On the beverage side, head sommelier Jhonel Faelnar crafts a mixed drink pairing for an additional $135 per person. In charge of cocktails are Jesse Vida and Samantha Casuga "who worked alongside the team to develop libations that showcase a blend of classic and new styles with Korean flavor influences."

The Parks long had a vision of such an endeavor, but they savvily used Atoboy as a way of familiarizing the New York City dining scene with Korean food and themselves. More than just providing great food and hospitality, "The pair hopes Atomix will offer a unique dining experience beyond what most people know and understand about Korean cuisine in New York City, and that it will bring more awareness to the many facets of Korean culture."

Jungsik, where JP previously worked, is one of the only other fine-dining Korean restaurants in The Big Apple, and the couple wanted to make sure the dining public was ready for all that Atomix is promised to bring. And based on the success of Atoboy, it is.