Happy 120th Birthday Bibendum: The Michelin Man As You Have Never Seen Him Before

To celebrate the birthday of the beloved Michelin icon, we uncover six never-seen-before drawings of the Bibendum by the Michelin Design Studio from our archives.

With its white tubby and bulgy figure, and cheerful demeanour, the iconic Michelin Man has been widely recognised around the world as the face of the MICHELIN brand since 1898.

Beyond serving as the brand’s mascot for the past 120 years, the Michelin Man, which is affectionately known as the Bibendum (or Bib for short), has lent its name to the Bib Gourmand category that recognises value-for-money restaurants in the MICHELIN Guides.

The Michelin Man, which is a gentleman made with stacks of white tyres, was born from the imagination of the founders of the French tyre company, André and Edouard Michelin. The brothers were at an international exhibition in Lyon in 1894, where they saw a pile of bicycle tyres in front of their stand. Making out a silhouette of a man from the stack of tyres, the pair said: “Add some arms and you’d say it was a man.” 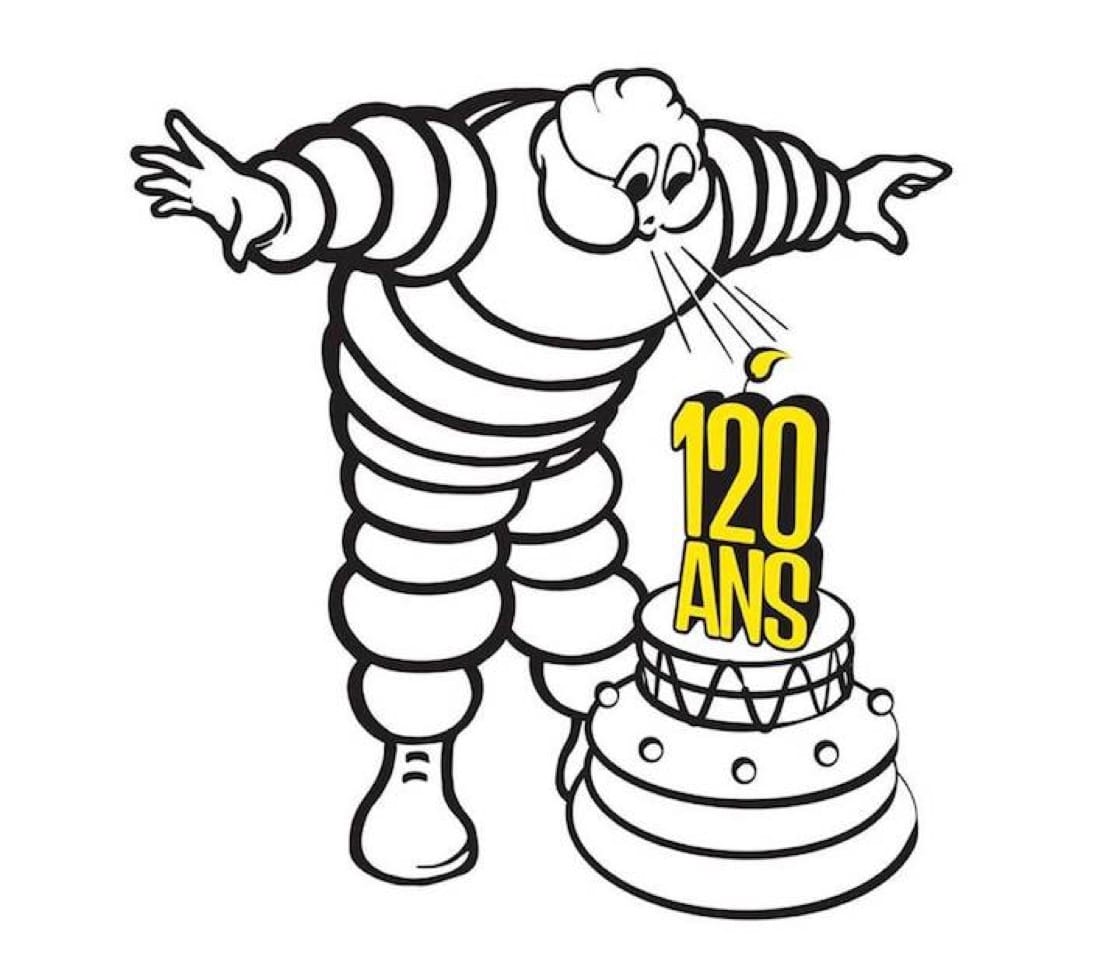 The Michelin brothers sought the help of illustrator Marius Rossillon, known as O’Galop, to bring their imagination to life. Inspired by one of his earlier advertising images featuring a fat man hoisting a beer mug, he replaced the beer drinker with a man made of tyres. The beer mug became a a goblet filled with nails and broken glass to show that these were no match for Michelin tyres. Rossillon proudly proclaimed: "Nunc est bibendum!" (“It’s time to drink” in Latin) and the rest is history.

Over the past 120 years, the Michelin Man has embarked on many gastronomic adventures around the world. In conjunction with his 120th birthday, we have extracted a rare collection of drawings by the Michelin Design Studio that span from 1908 till today. Over the years, the adorable Bibendum has been whimsically reimagined as a dragonfly and a magician, and he even gets hitched. Happy 120th birthday, Bibendum!
Advertisement
Advertisement 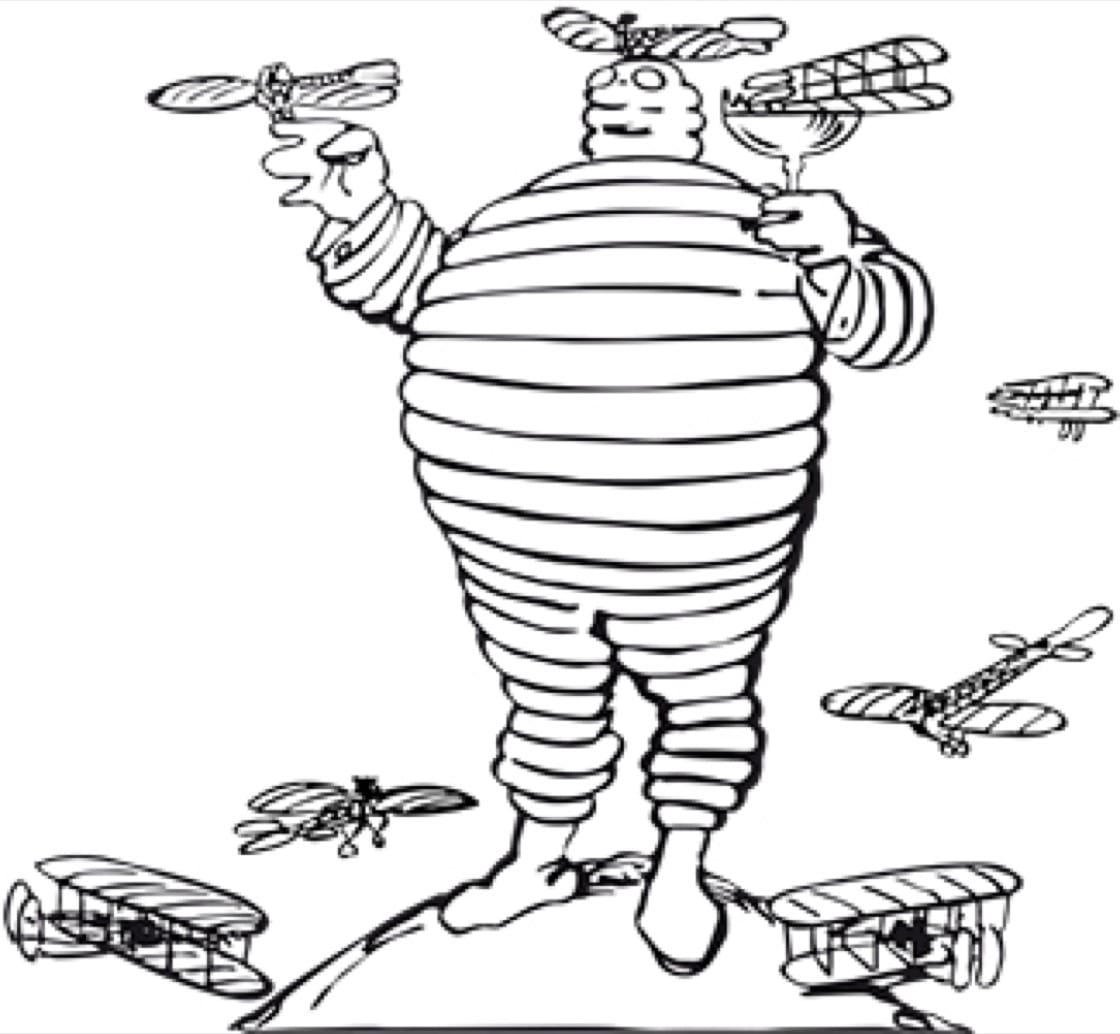 The land may be his favourite playing field, but the Michelin Man is also very comfortable up in the air, which makes sense as he is, after all, made of air.

During the first years of the 20th century, Bibendum closely followed the burgeoning aviation industry. At that time, aircraft and biplanes only flew for short distances. Spurred on by intrepid and courageous flying enthusiasts, the machines improved and their flying distances grew.

Convinced of the importance of this emerging means of transport, the Michelin Man decided to take modern adventurers "under his wing”. To fulfil his flighty aspirations, the Michelin Cup and Prize, a series of long-distance aeroplane flight competitions, was started in 1908.

A Prediction... The 662nd Monday, a mysterious cartoon of the Michelin Man in 1914, depicts him as a magician wearing a wizard’s hat and sitting in front of a table of opened spell books with a black cat on his shoulder.

However, the comparison ends there as predicting the future is no magic trick. On the contrary, it is a very serious subject as it’s all about preparing for future challenges. This is what Michelin’s founder Edouard Michelin said in his note, The Spirit Of Observation, on 2 July 1929. The note states that “the past is the past and it was good. The future must be even better and it will only be so if we move fast, otherwise we will be late. What is the point of inventing something if someone else gets there before us? We have to be first.”

This cartoon makes reference to a famous weekly column, Michelin Mondays, that was written by the Michelin Man in L’Auto newspaper in France. In one of the columns, the prediction of the 662nd Monday was finally revealed: “Brother motorists who drink in my words like I drink in obstacles, I predict that my father Michelin’s competitors will recommend to you [...] special types of tyres that will cost more than Michelin tyres...and they will not be worth it!” 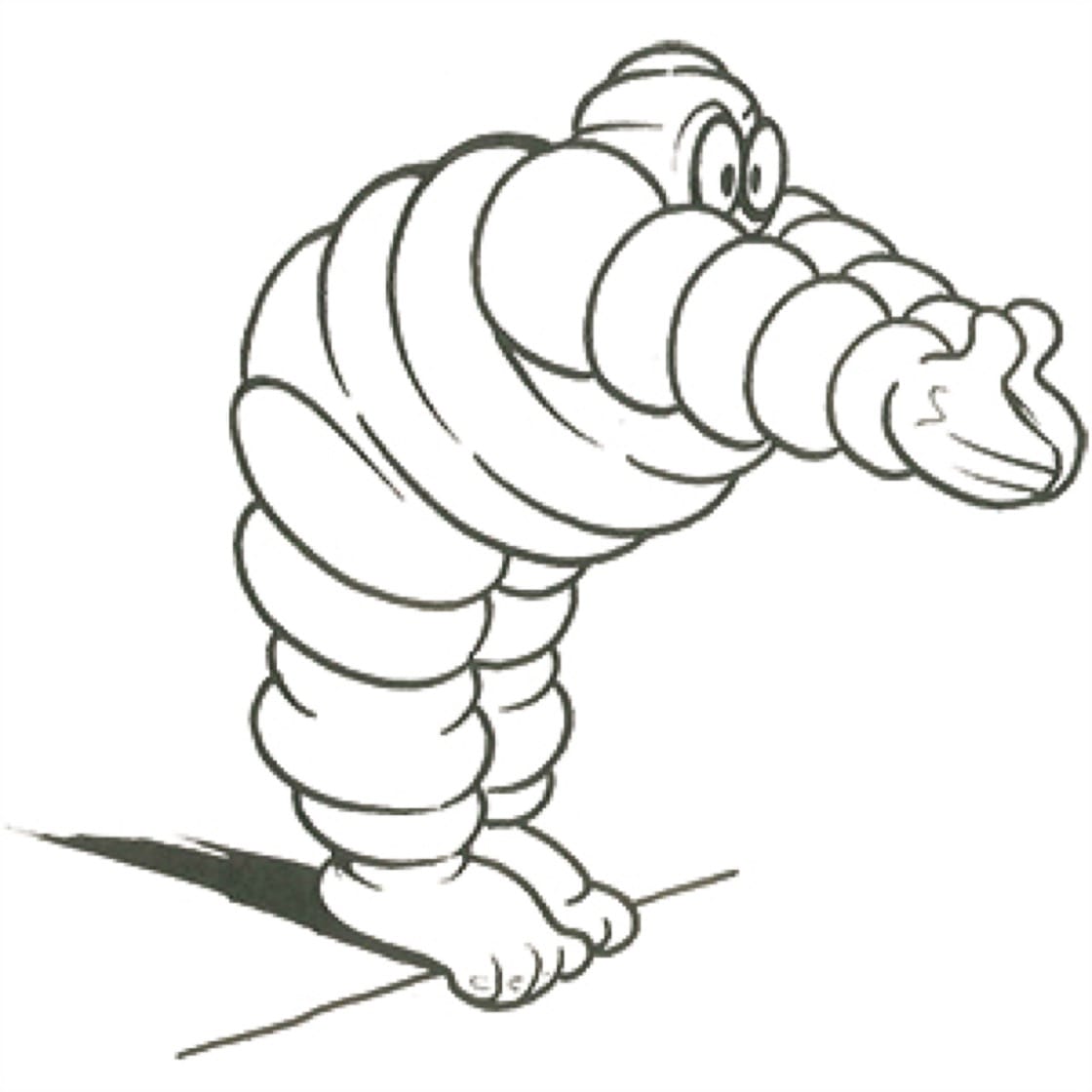 Like many artists, the cartoonists in the Michelin Design Studio drew inspiration from their era. So it’s not rare to find a few influences in their drawings. This “Bibendum, the diver” (one of a series of 6 drawings) is in the style of E.C. Segar (1894-1938), the creator of Popeye, the famous sailor cartoon character.

Just like the Michelin Man, this comic strip character was famous around the world for his strength and incredible physical resistance — a parallel that did not escape the creator of this design. 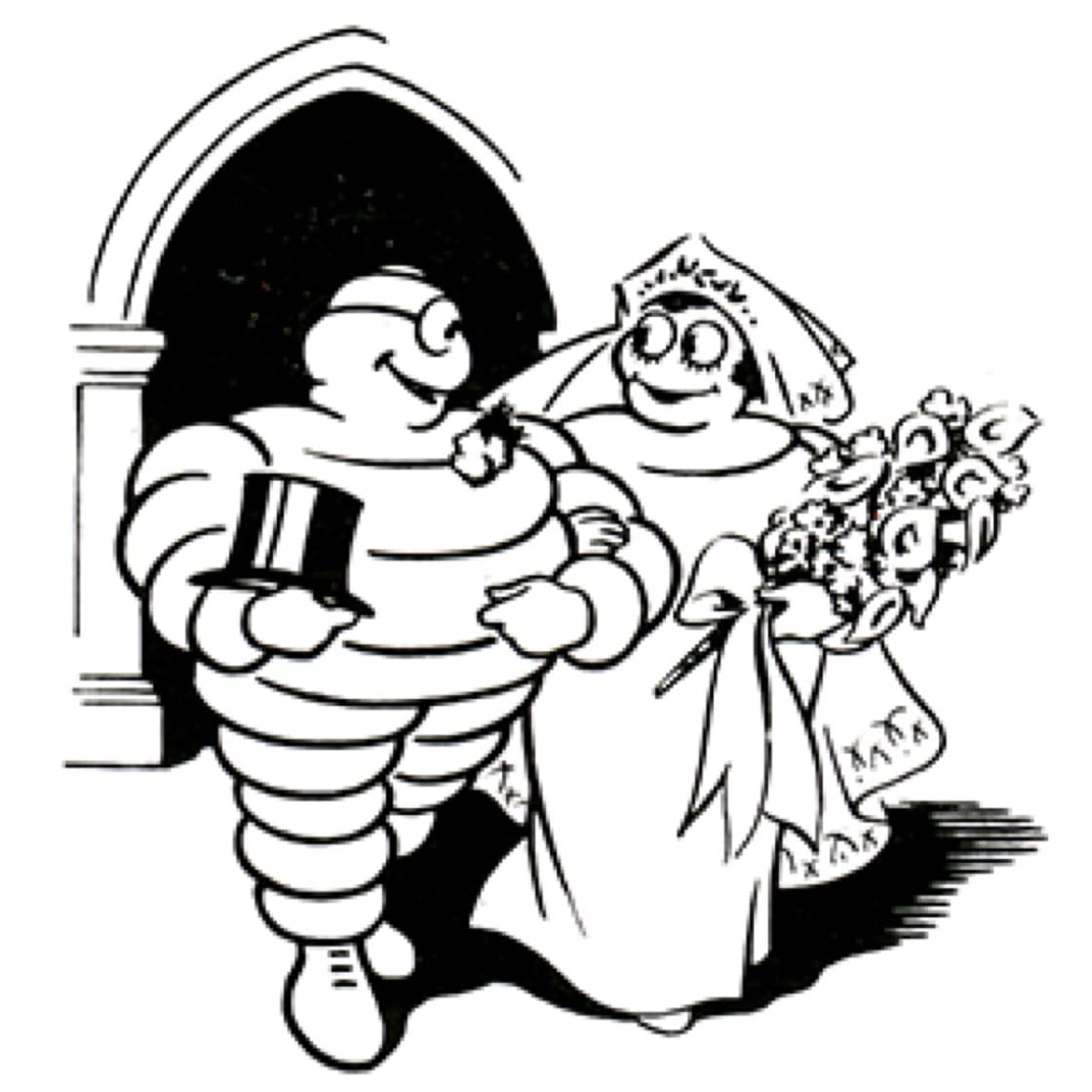 The Paris Motor Show in 1952 was the stage for an incredible event — the wedding of the Michelin Man. In actual fact, it was an event to celebrate the “marriage between steel and textiles”.

The “ceremony” took place at the Michelin booth at the Paris Motor Show in front of an astounded crowd. Once again, Michelin made an impression with an effective yet simple communication; it used an example that speaks to the masses and made a complex innovation understandable. 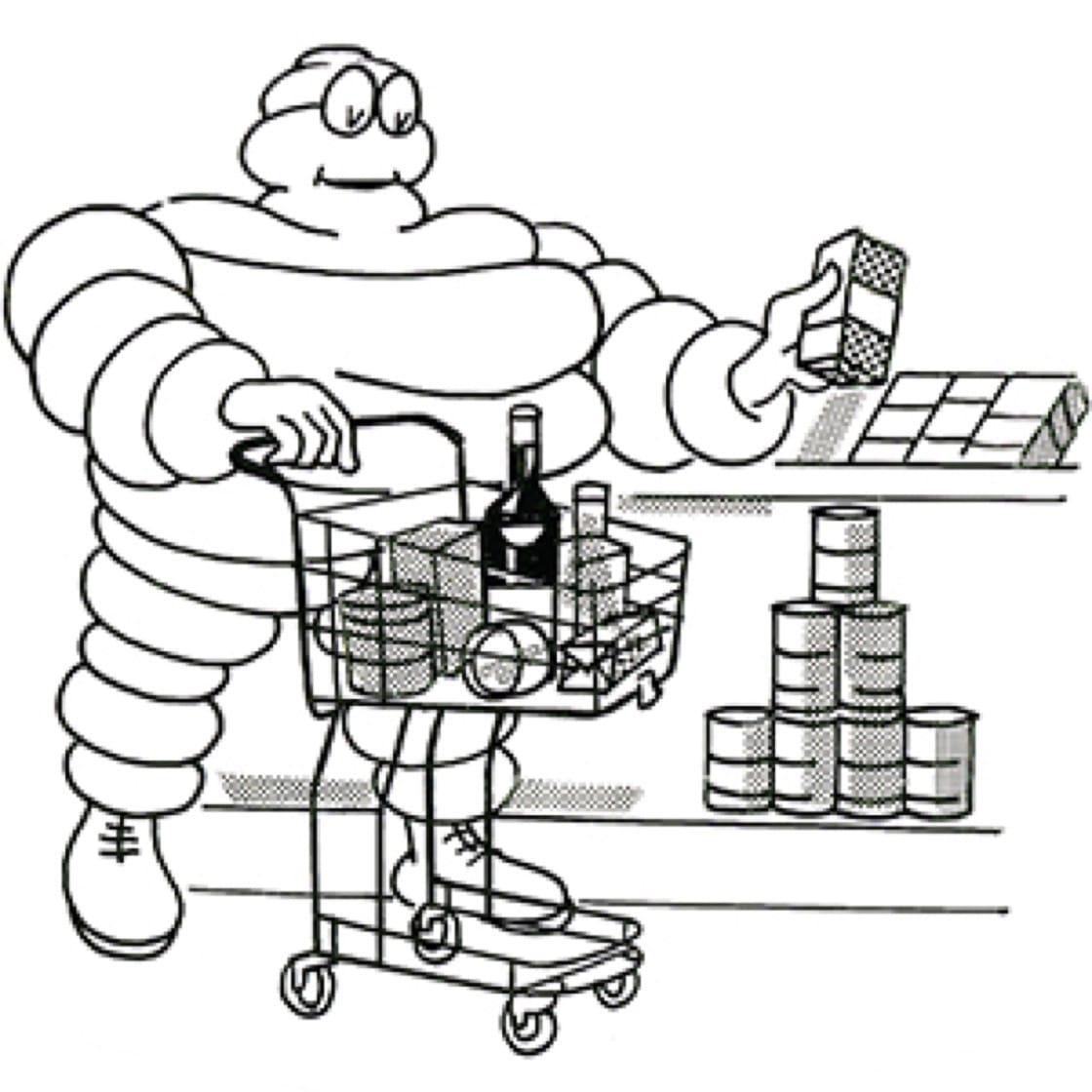 Through various initiatives, Michelin has always committed and involved itself in social and societal issues (though they were often very advanced for their time).

One of them is the Michelin Staff Cooperative Supply Company (SOCAP). This pioneering supermarket sells everyday items at moderate prices to Michelin employees. The first store opened its doors in 1910. It grew to a dozen points of sale in 1927. The supermarkets later became accessible to a broader customer base.

The Michelin Design Studio drew a cartoon of the Michelin Man doing his shopping for the advertising leaflets promoting special offers and new products.

For the ninth time since his birth in 1898, the Michelin Man evolved once again to stay faithful to his timeless modernism.

This new version incarnates what the Michelin Group wants to project: an everyday partner who is discreet, considerate and reassuring. Today, the Michelin Man leaves the leading role to our customers.

The new visual identity has two logos: one for the Group, the other for the commercial brand. Whilst similar to the previous logo, the two designs portray a well-defined Michelin Man to make him more visible and expressive and to strengthen his closeness to the customer. In 2017, Michelin once again began selling a figure that sits on top of truck cabs. 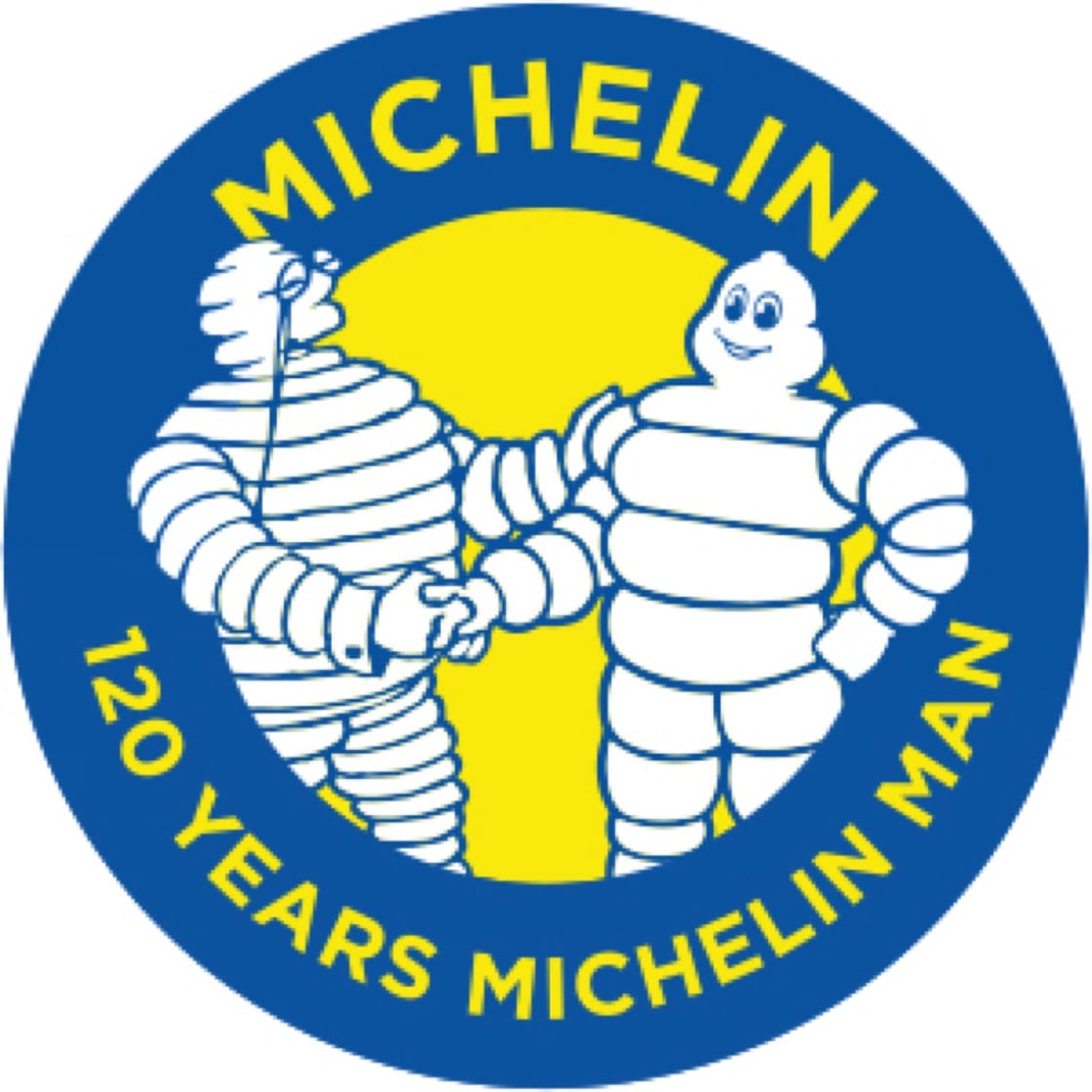 A new design was created to mark this milestone. The image shows Bibendum from 1898 and today’s Michelin Man shaking hands. This handshake expresses Michelin’s continuity: yesterday, today and tomorrow. The composition, inspired by a historic design, was updated by Mostapha El Oulhani, the designer of Michelin’s Vision tyre. 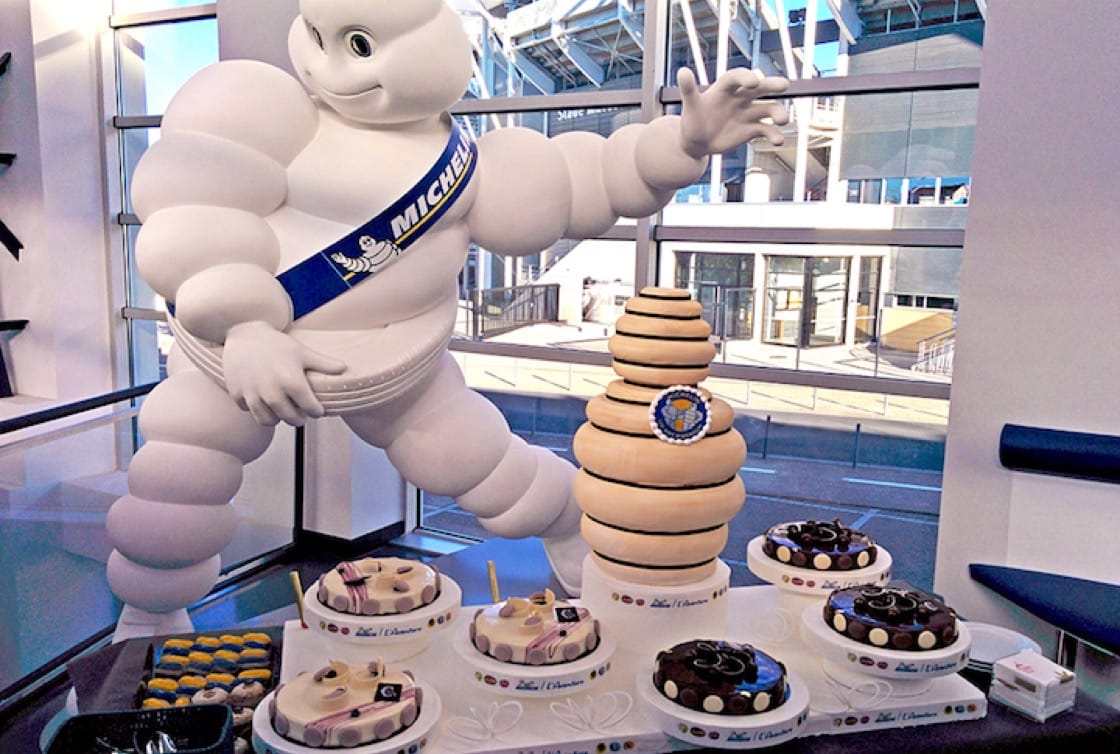 To celebrate the 120th birthday of the Michelin Man, an exhibition on the adventures of the Bibendum will be held at L’Aventure Michelin Museum in Clermont-Ferrand, France from 27 July to 31 December 2018. 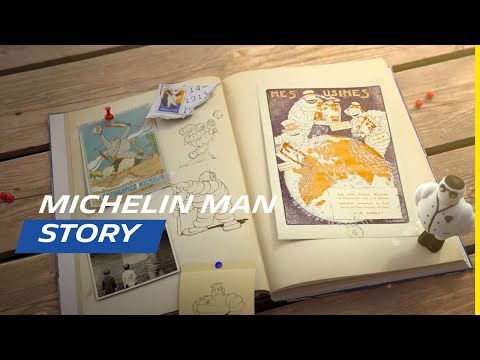