street food Taiwan Behind The Bib

Chen Kuo An, proprietor of A Cheng Goose, recalls how in March of 2018, moments after he was wheeled out of an operating room barely awake, his wife said softly to him: “We won a Bib Gourmand recognition in the MICHELIN Guide.”

“Really?” He replied faintly, feeling overwhelmed. In that moment, it was as if all the years of hard work and overcoming adversity had paid off and a sea of emotions flowed from his eyes. 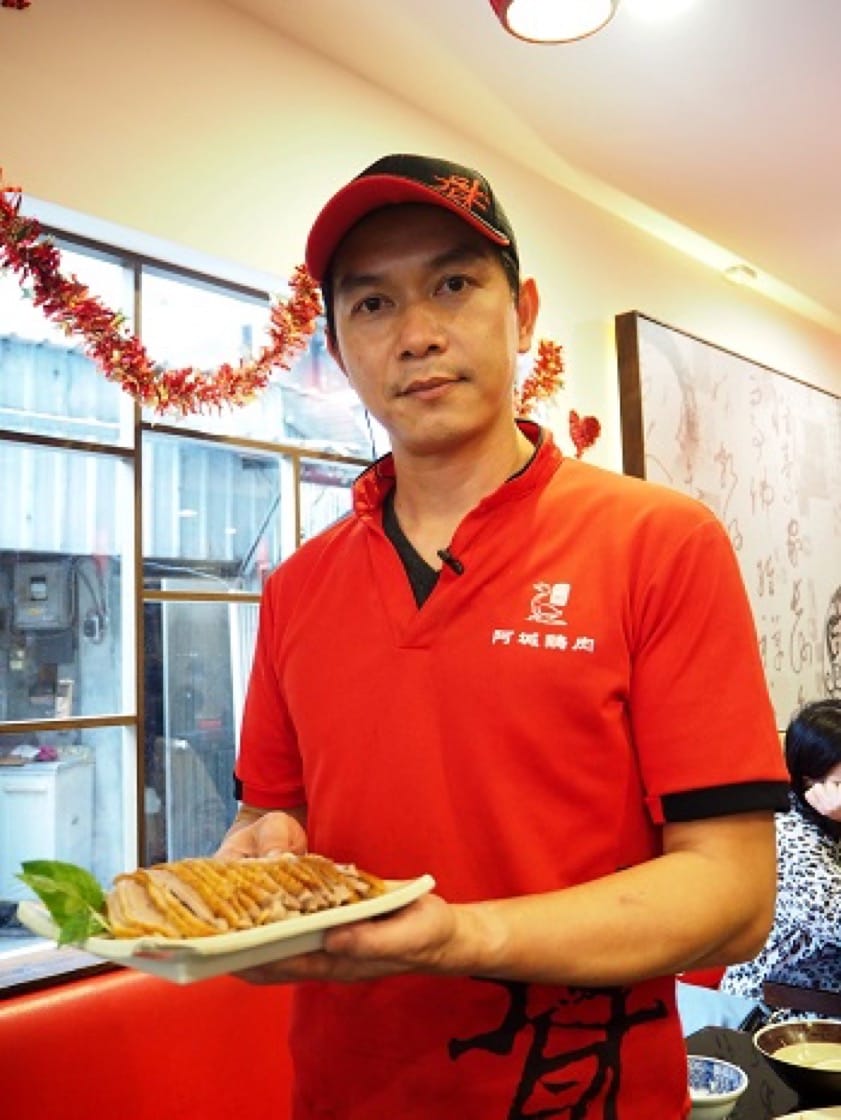 “It’s difficult to recruit capable staff to work at a small traditional restaurant," he says. "The team members at the carving station earn about upwards of NT$80,000 every month, which is enough to live on and make a decent living. But now after the Bib Gourmand recognition, you can see that they are very proud to be working here. I’m really happy to see all those years of effort being recognized.”

After the MICHELIN Guide Taipei 2019 Bib Gourmand selection was released, A Cheng Goose, which had been doing very well to begin with, received twice as many patrons as before. This goose specialist was established by Tsai Fang Cheng in 1990 in Tucheng District, New Taipei City. The Tucheng and Jilin branches are now taken over by the younger generation who are related by marriage. They share the same goose supplier but adopt slightly different recipes and techniques to create their popular goose dishes.

Smoked goose is A Cheng’s signature dish, with 90% of customers ordering this dish while the rest opt for chopped poached goose. While smoked goose is not uncommon in Taiwan, A Cheng's sports a distinct aroma from its unique and painstaking smoking process. Eschewing efficiency, Chen chooses to smoke only 10 geese at a time in a smoker that can fit 15, so that the birds do not touch each other and can be thoroughly infused with the smoke from the smouldering sugarcane. 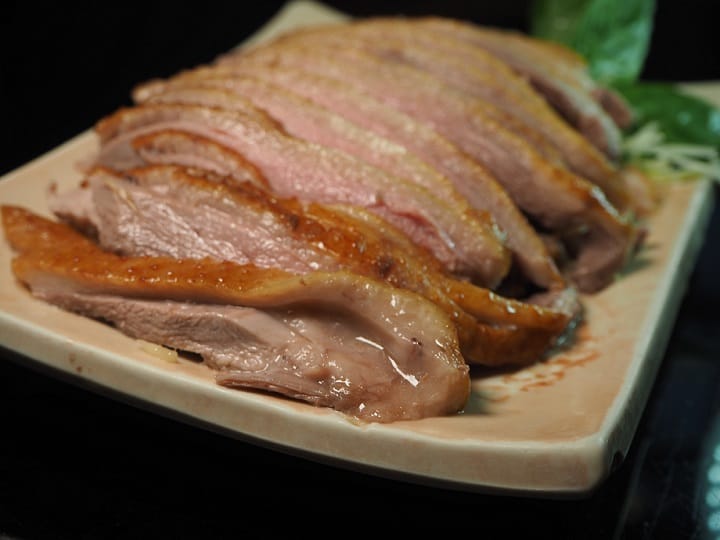 The devil is in the detail

At A Cheng, customers can choose between the front and back half of the goose. The front part is mostly boneless breast meat, meaty with a firm texture. The back consists of more tender and fatty goose leg which comes with small bones. Both are just as delicious.

To ensure the goose meat that arrives on the diners’ table is smooth and sweet, every step is taken seriously, from the choice of goose and butchering to cooking and carving. Chen selects 100 to 120-day-old geese raised in the Yunlin Province that feed on corn and grass. These geese are butchered on the very day they are cooked and served to maintain the superior texture of the meat. For this reason, there is a limited amount of goose available at A Cheng every day. Chen never sells the leftovers from the previous day.

When it comes to cooking technique, the goose is slowly simmered instead of boiling to prevent the meat from getting tough. But even then, a minute too long in the pot could cause the goose meat to harden up. Each goose is different in size, with the texture of its meat changing with the seasons – becoming fattier in the winter. Based on its size, the geese are sorted and dropped into four different pots for cooking at different timings. After that, the cooked geese are dipped in a cold water bath, causing the skin to tighten up for easier carving. 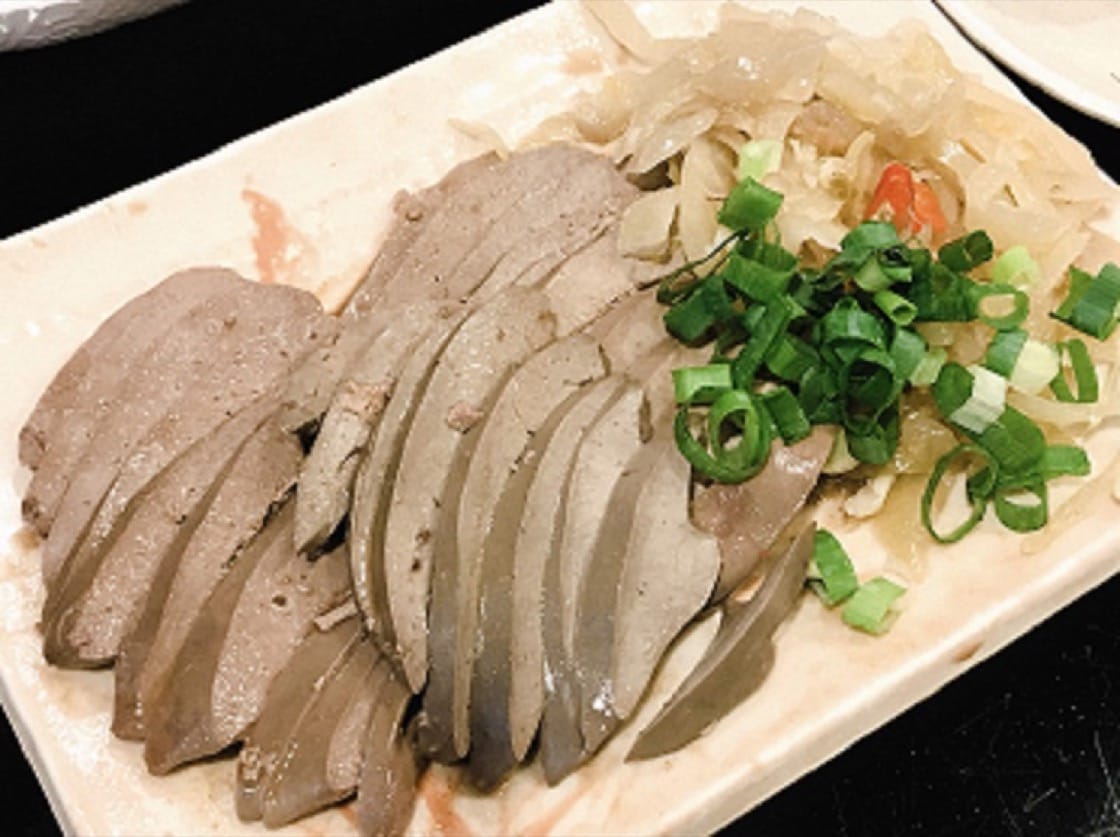 Another special dish at A Cheng is goose offal cooked in a master stock made with herbal ingredients (Photo: Chen Ching-yi)

The carving technique is another crucial step to the success of the dish. At A Cheng’s Jilin branch, every carving master is trained for a year and a half before they begin to work independently. Rather than slicing to-and-fro through the meat, the masters chop off thin slices in one fluid motion to keep the juices in. To watch these professionals at work is to whet the appetite while waiting in line for a seat.

Chen dedicates no less care to the other dishes he offers. While goose offals might be simply boiled and served at other establishments, the goose livers, gizzards and hearts at A Cheng in Jilin are braised in a medicinal herb-infused master stock. Goose blood cake is steamed rather than boiled to emphasise its bouncy mouthfeel. Also on the menu are pork sausages that make use of king oyster mushrooms in place of fat for a crunchier, healthier rendition of a traditional side dish. Open all day from 11.30am to 9 pm, this means that travellers on a tight schedule can even pop in between meals to make the most of their day.

RELATED: More Behind the Bib Stories