His seasonal dishes are mainly composed of Japanese ingredients, but with a touch of French techniques. Each dish perfectly blends Eastern and Western charms. There is the alluring Dutch smoked eel with green sauce from kureson (Japanese watercress), crème fraîche, and glamorous Oscietra caviar. The signature dessert comes in the shape of binchotan Japanese charcoal on a mysterious black plate. When you crack the charcoal open, it reveals the scrumptious refreshing taste of citrus, sweet white chocolate, and a hint of Japanese Chita whiskey.

The 33-year-old Spaniard lived in different parts of Europe, exposing himself to a plethora of ingredients and definitions of deliciousness. He started from his hometown near Barcelona, Pineda de Mar, to London, to Cologne, to Amsterdam, and now Bangkok. However, the tattoo-loving chef with a Michelin Man on his right arm says an ingredient is seared to his heart since the first bite. 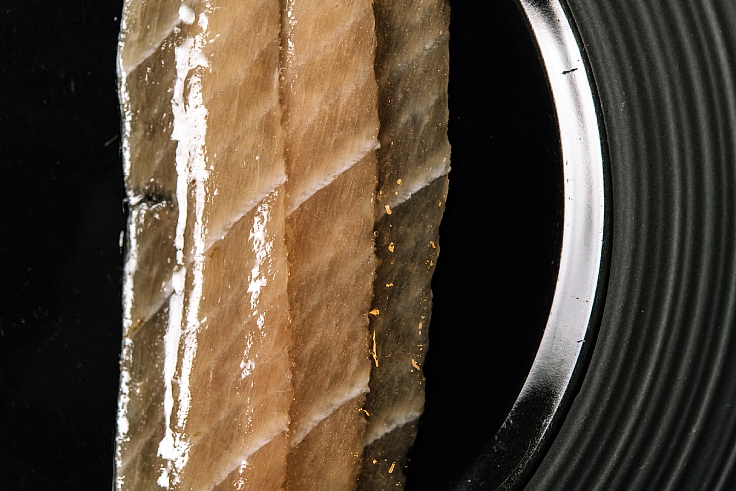 The chef’s most favourite ingredient
“I remember the first time I ate it. My brother was the first person who made me try chutoro, amongst many other things. My brother was born to be a chef, and I have followed in his footsteps since I was young.”

Horcajo reminisces about his 17-year-old self helping out his brother on Sunday’s mornings at a Barcelona restaurant. The owner would leave to buy fresh seafood every week. He watched his brother filleting fish into 3 parts. That was when he had his first taste of chutoro, the meat from tuna’s belly near its fin and back. The pink firm meat is filled with layers of healthy fats. The taste is sweet. “...‘Here, try this. Do you like it?’ I remember chutoro because we worked together in a seafood restaurant in Spain. I felt it was like fish, but there was something like meat too. The fat reminds me of pork fat. The taste was unforgettable. I remember the flavour and the fattiness. It was oily, but not annoyingly fatty. It’s nice and has a rich taste of fat."

That was the first time he learnt to cherish this treasure from the sea. “Tuna is seasonal in Spain. But we don't have such a thing as chutoro or otoro. We have only tuna and tuna belly. This is something that came into Spanish gastronomy by the Japanese influence.

“In Spain, we normally sear it from both sides. We keep the inside part raw, and we cut it a little bit thicker like sashimi. Then, we use it mostly in salad, as a starter, with a lot of greens and local herbs. It’s very easy to do, and easy on the stomach.” 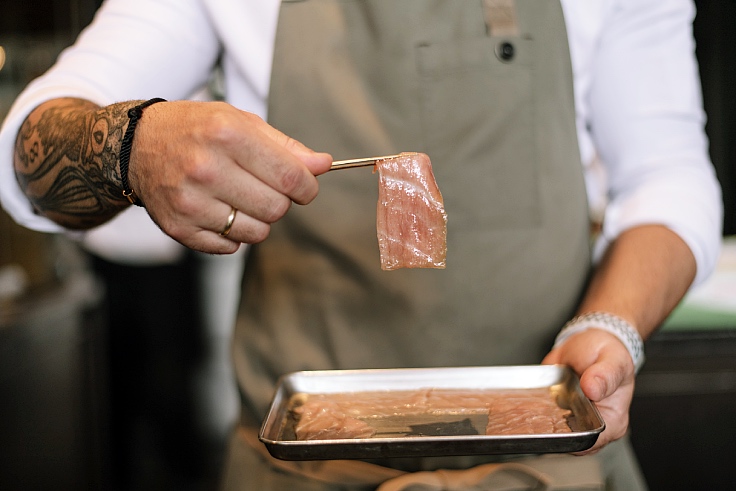 “A few years later when I was based in Amsterdam, I visited Yamazato there. I watched the team cleaning tuna. They cut a piece, and let me taste it. That brought me back to the very first time I tried chutoro. The memory with my brother popped up. I recognised the unforgettable flavour. That’s why chutoro is so special to me.

“It’s the middle of the belly, which can be divided into 3 parts. Otoro is the fattiest. Then, you have the layer of chutoro. Then, you have the next one, which is fatless. I like chutoro more because it’s not as fatty as otoro. There’s more meat so you can enjoy more than one piece of it. Otoro is so fatty that it overpowers your taste buds. Chutoro is great as an appetiser.”

That is the reason Horcajo often creates menus based on this ingredient wherever he works – be it at Ciel Bleu in Amsterdam, or at a restaurant in Germany. He argues, “Chutoro doesn’t need anything to compliment it. You can cook or marinate it. You can do a lot with it. For me, the nicest part is when you eat it raw.” 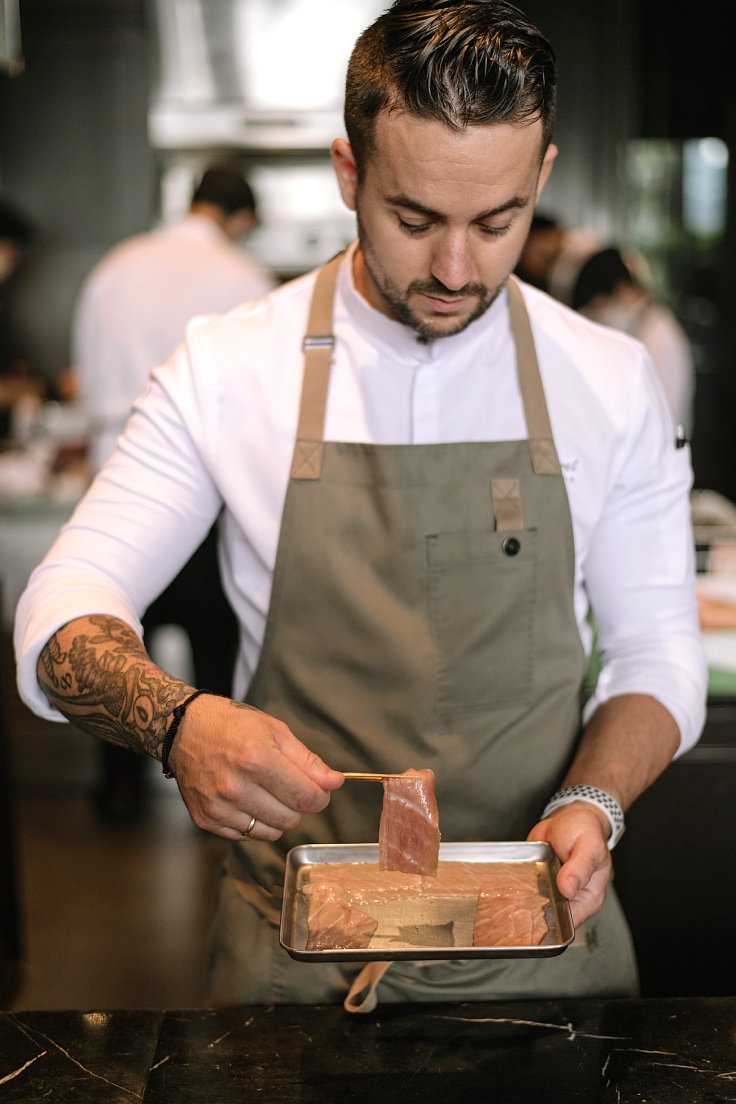 Undoubtedly, he also brings his favourite part of tuna belly to Elements, Inspired by Ciel Bleu. The chef wants everyone to enjoy it the way he finds best — raw.

Chef’s signature dish using chutoro
“I like making chutoro as a starter. If you start with a fatty fish part, it’s going to be harder to enjoy the rest of the meal. I also like cooking with acidities, sour taste, and refreshing ingredients. My chutoro strikes a very nice balance between fattiness and acidity."

Horcajo does not want to keep this delicious piece a secret. Most diners are familiar with otoro. The chef wants to introduce them to the less fatty chutoro.

“Try this,” said Horcajo whilst handing us a pink translucent, yet firm, slice. “At Elements, we serve it raw. We use oyster and oyster-based cream to balance the taste. Before, we served it with Japanese pickles. But, the new menu comes with pickled rhubarb and seasonal herbs. They help balance out the oily taste with acidities whilst adding some aroma. Also, the chutoro’s taste is brought up. Rhubarb’s aftertaste lasts quite long, and it gives an interesting twist when it meets with chutoro’s fattiness that melts in your mouth.” 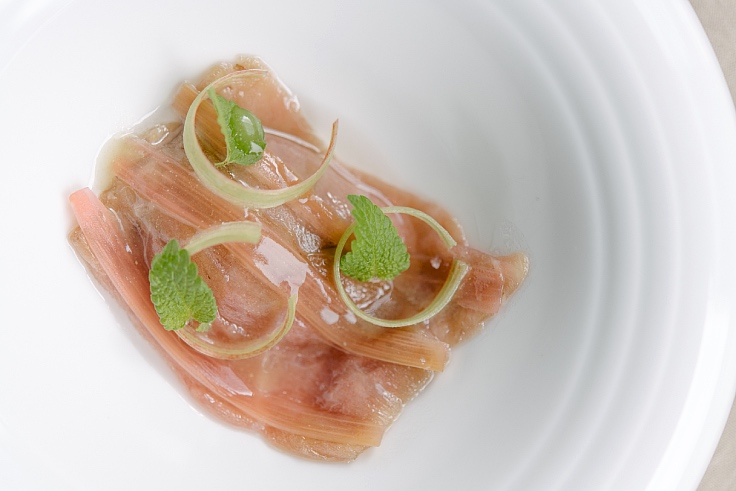 Does serving chutoro raw mean the Spanish chef is holding back or saving the environment? According to the chef, that’s not the case. “You lose the chutoro’s quality when cooked, unless you cut it into a big thick piece where you could sear it and still preserve the fattiness in the middle”. He also notes that it is very important to eat them hot. Never leave them cold. “We serve them in thin slices so you can easily enjoy it raw. That’s the idea."