Chefs Arnaud Dunand-Sauthier and Ryuki Kawasaki are both masters of classical French cuisine. They have worked with some of the most exacting masters in the world of French gastronomy. And they both came to Bangkok to breathe new life into luxurious hotel restaurants.

When Chef Ryuki took over the kitchens at Mezzaluna in 2015, a mutual friend at the Mandarin Oriental introduced him to Chef Arnaud, who arrived at Le Normandie in the Mandarin Oriental Bangkok in 2012. They became fast friends and when they are together, their easy camaraderie is readily apparent. “A very good friend, and a very good cook,” says Chef Arnaud about Chef Ryuki. “Arnaud is my friend and one of the best chefs in Bangkok,” echoes Chef Ryuki, returning the compliment. “We have different ways to cook, but the same passion,” says Chef Arnaud about what they have in common. “The passion for excellent produce makes us very close.”

Starting with the Greats
Chef Ryuki got his start in the kitchens of the late Paul Bocuse, a legend in the French culinary world. When Ryuki returned to Japan, Bocuse introduced him to Taillevent-Robuchon, named after two Paris greats, the venerable Tailllevent, founded in 1946, and Chef Joël Robuchon who oversaw the joint venture. “I worked for Robuchon for five years in Tokyo,” recalls Chef Ryuki. He later returned to Paris to work in smaller restaurants, and then was picked by Pierre Gagnaire to work in his restaurants in London then Las Vegas. He recalls that Bocuse was very traditional but what impressed young Ryuki the most was what Bocuse taught him about French people, “what they eat, what they do every day,” an understanding that directly inspired his cuisine. Robuchon was “a perfectionist” who valued rigorous technique, while Gagnaire “was the opposite” teaching him that “there is no limit to creation”.

Chef Arnaud's CV is just as impressive. He left school at 14 to apprentice in the kitchen of another living culinary legend, Marc Veyrat, renowned for his innovative work with aromatic mountain plants. Then came a series of respected restaurants around France that ultimately led him to the opulent Hôtel Crillon in Paris and finally to the role of roving chef managing projects for Guy Martin, the chef of Le Grand Véfour, a Paris landmark that first opened its doors in the 18th century. From all these greats, he learned firsthand about the precision that Michelin inspectors expect and began looking for new opportunities. 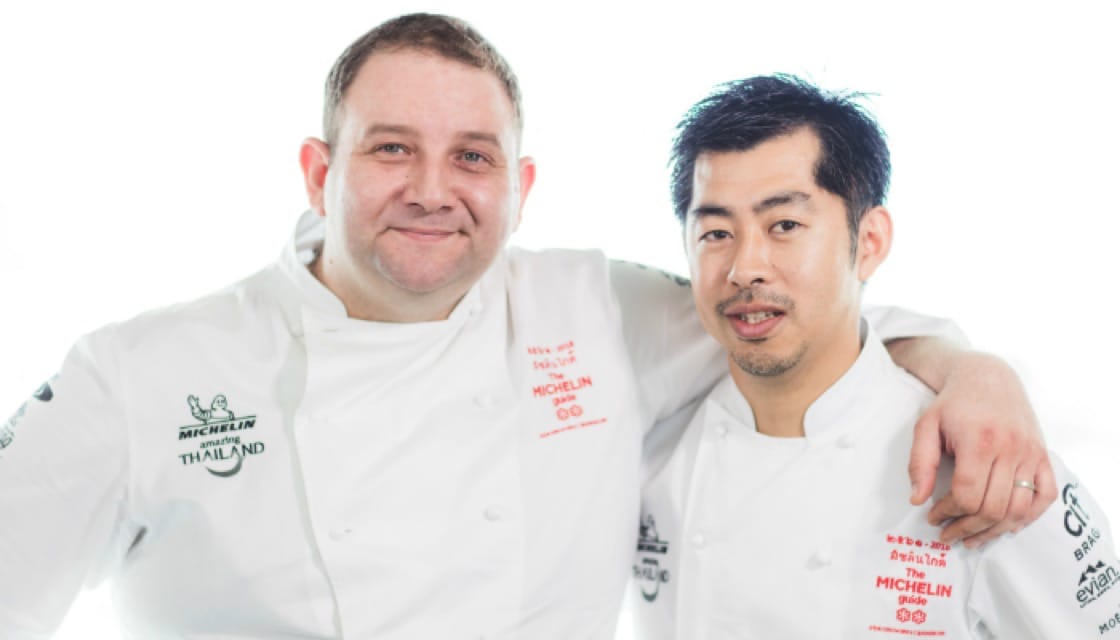 Chefs Arnaud Dunand-Sauthier (left) and Ryuki Kawasaki are both masters of classical French cuisine and friends in the kitchen.

Bangkok Calling
For both chefs, moving to Bangkok was more serendipity than design. Chef Ryuki didn't plan on coming back to Asia, but when the opportunity arose, he was ready for a new challenge. “I like to work in small restaurants and concentrate on quality.” he explains. Mezzaluna's thirty-five seats and his team of twelve cooks and three pastry chefs are a far cry from the army of kitchen staff he led as Gagnaire's chef de cuisine in Las Vegas where he served hundreds of diners a day.

When he was contacted by a headhunter to interview for a job that was “a little far away”, Chef Arnaud had never sent a CV and never left Europe. He recalls with a laugh that the hiring process in Bangkok was “a little comical, because my English wasn't extraordinary.” Today in private the chefs still converse in French, a language that Chef Ryuki had to learn when working in France. “All my French comes from the kitchen,” he said modestly, in French.

It was love at first sight for Chef Arnaud and Le Normandie, but he had to rebuild everything from the ground up. “I arrived here and fell in love with the restaurant,” says Chef Arnaud. He hired and trained a young all-Thai team for his kitchen, a fact which he is very proud of. He also sources quality ingredients, mostly from France where he still maintains close working relationships. Making annual trips to visit all of his suppliers is a crucial step in ensuring he gets the products he needs.

Pigeon, turbot, organic vegetables, and almost everything on the menu “I buy fresh, exactly like I would in France, except that I am 12,000 kilometers away, said Arnaud. “What he chooses is the best of the best,” confirms Chef Ryuki. “In the same way, I use products from Japan, including Murakami beef from my home in Niigata Prefecture.”

Two Stars and Beyond
Both chefs admit they felt confident the work they were doing was worthy of recognition from Bangkok's first Michelin Guide.

“Having worked fifteen years for Bocuse, Robuchon and Gagnaire, I know what the standards and quality are, so I wasn’t surprised when I got a Michelin star, but I was surprised to get two,” admits Chef Ryuki.

“I am proud and happy to have two stars, and I push myself to ensure that my customers are happy,” said Chef Arnaud. “I think the difference between a two-star and a three-star is a recognizable identity. I'd like someone someday to look at my dish and say that's an Arnaud Dunand.”

Has winning two stars created a rivalry? “I don't think he's a competitor,” says Chef Ryuki. “I respect his cuisine and he respects what I am doing. We'll help each other reach the next level.”

For more information about the first Michelin Guide Dining Series held on March 27th in Le Normandie and on March 28th at Mezzaluna, click here.

Here's what our inspectors say about Le Normandie at the Mandarin Oriental Hotel, Bangkok (Two Michelin Stars)
Since opening in 1958, Le Normandie at The Mandarin Oriental has earned a reputation as a premier destination for those looking for sophisticated French cuisine. The restaurant was refurbished in 2015 but certain elements - like floor-to-ceiling windows overlooking the Chao Phraya River and elaborate flower arrangements filled with local flora - remain the same. Superb ingredients, refined techniques, and well executed combinations of flavours and textures ensure its reputation is deserved. Service is impeccable.

Here's what our inspectors say about Mezzaluna at The lebua Hotel, Bangkok
Perched on the 65th floor of the Lebua Hotel, Mezzaluna offers sky-high and breathtaking views. Toast to the high life at Sky Bar before settling in for a gastronomic journey. The accomplished chef and his team deliver European delights with Japanese precision in five- and seven-course set menus, along with some surprises. The flavours are balanced and sophisticated, and the food is creative and technically precise. A wine list of substantial proportions and prices accompanies.