Egged on by chants of “Girl power! Girl power!”, the eight female chefs helming eateries awarded stars by the 2019 Michelin Guide took to the stage, posing for a group photo shot cementing their status as bona fide culinary successes …

The chefs — ranging from a 73-year-old street food legend to a 31-year-old whose restaurant opened its doors mere months ago — represent a renewed creative force in the upper echelons of Thai cuisine, links in a food chain that has traditionally relied on the hard work and know-how of generations of Thai women.

“Thai cuisine has always been driven by Thai women,” said Chef Pim Techamuanvivit of the Michelin star-winning Nahm at the launch of the 2019 guide, “so it’s great that you’re seeing the spotlight shine on Thai women, and it’s great that Michelin is really searching out and looking for really non-cheffy Thai food. But to me, it’s not about returning Thai cuisine to Thai women or anything. It’s always been with us.” 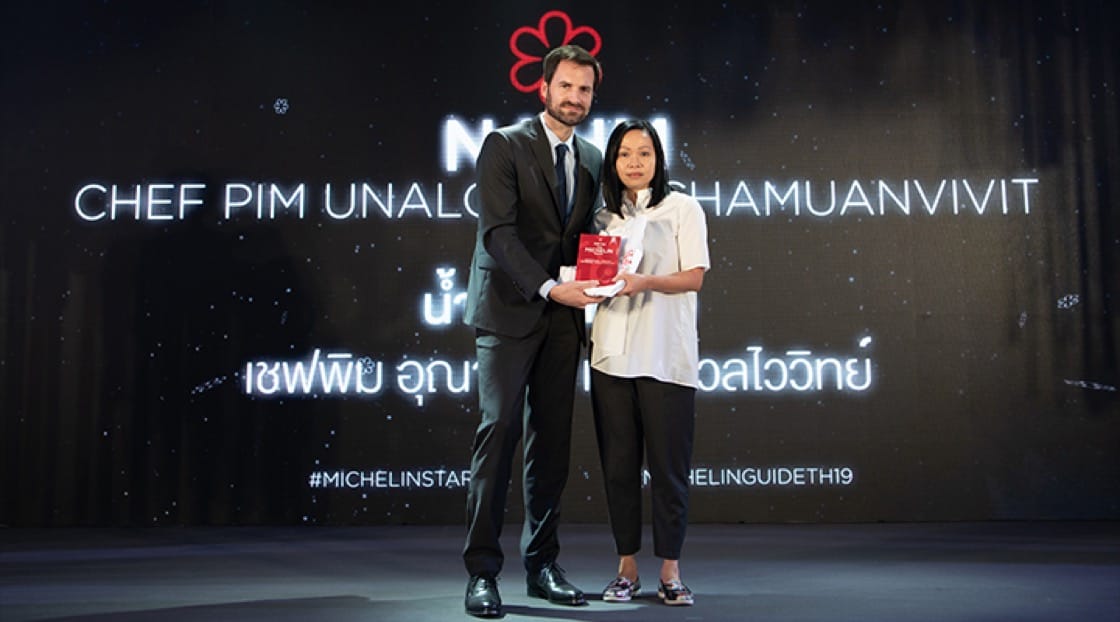 Women have played a big role in Thai culinary history back to the days of Maria Guyomar de Pinha, better known as “Thao Thong Geep Ma”. A Japanese-Bengali-Portuguese woman born in Ayutthaya during the reign of King Narai, she was made a slave in the kitchens of King Phetracha, where she is credited with introducing a wealth of Western-inspired dishes to the Thai cooking lexicon like “foy thong” (golden threads) and curry puffs.

That culinary tradition, passed on by word of mouth from generation to generation, can still be glimpsed today in the work of chefs like Chanchawee Sakunkan (better known as “Aunt Dang”) of Michelin Bib Gourmand restaurant Krua Apsorn, who keeps local cooking traditions alive through her food.

“It is not worth it to take shortcuts because you can tell it in the taste,” she said. 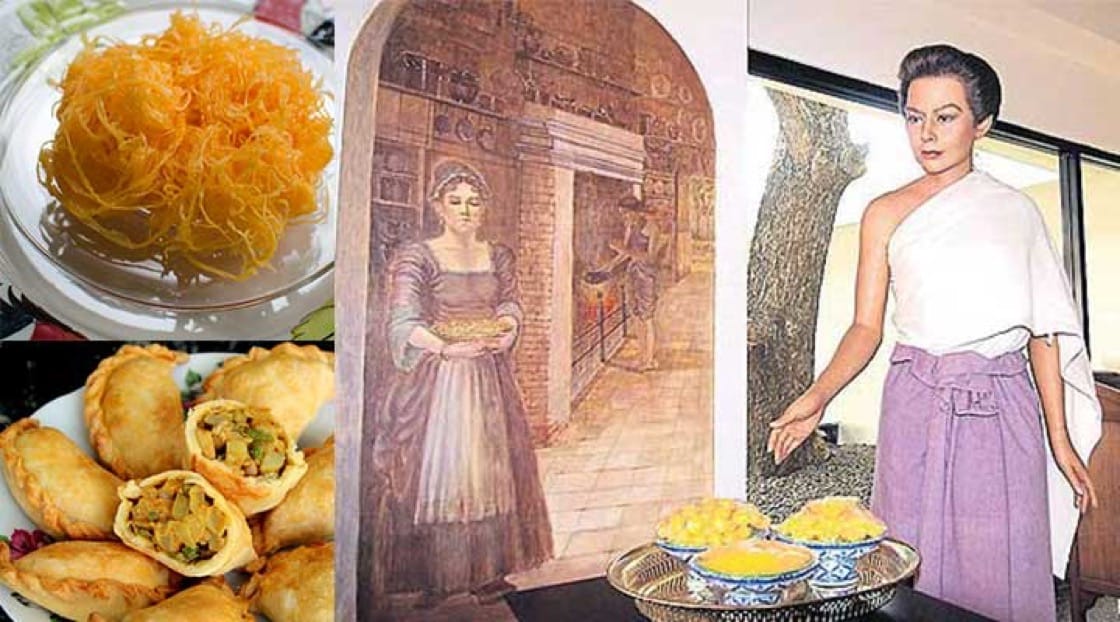 Back at the launch event, Chef Pim cuts off her chat with reporters in order to take a selfie with Supinya Junsuta of the Michelin-starred street food shophouse bearing her nickname, “Jay Fai”. For the 73-year-old, her second year with a star promises to be far easier than her first, when customers began to queue outside of her restaurant almost overnight, eager for a taste of her bracing tom yum soup or impeccably rolled crabmeat omelettes.

“In the first seven days of getting the star last year, I lost 10 kilogrammes,” she said, still fresh from a night spent talking until 4 in the morning with a coterie of visiting Italian chefs. “But now, I have my system. I know when to eat, when to go to the bathroom, how to prepare for the day. Then by 2pm, I don’t stop working until 1 in the morning.”

Taking Jay Fai’s place in her inaugural year in the guide is Chef Banyen Riengsantia of newly- minted Michelin star restaurant Suan Thip, where traditional dishes like “gaeng kii lek” (cassia leaf curry) reign supreme. “I was very surprised!” she said. “When they told me, I was saying, are you joking? I never thought that I would ever be in the Michelin Guide. But I am very happy that it happened.”

Also debuting on the guide’s pages is Ruean Panya’s Chef Pannee Ganisthanaka, whose lon pu (coconut and crabmeat relish) and deep-fried prawns are attracting a bigger crowd than ever before. “So many people have come in, it’s been quite dramatic,” she said. “I had heard a bit about Michelin before, but I didn’t really know what they were all about. Now, I feel only gratitude for them.” 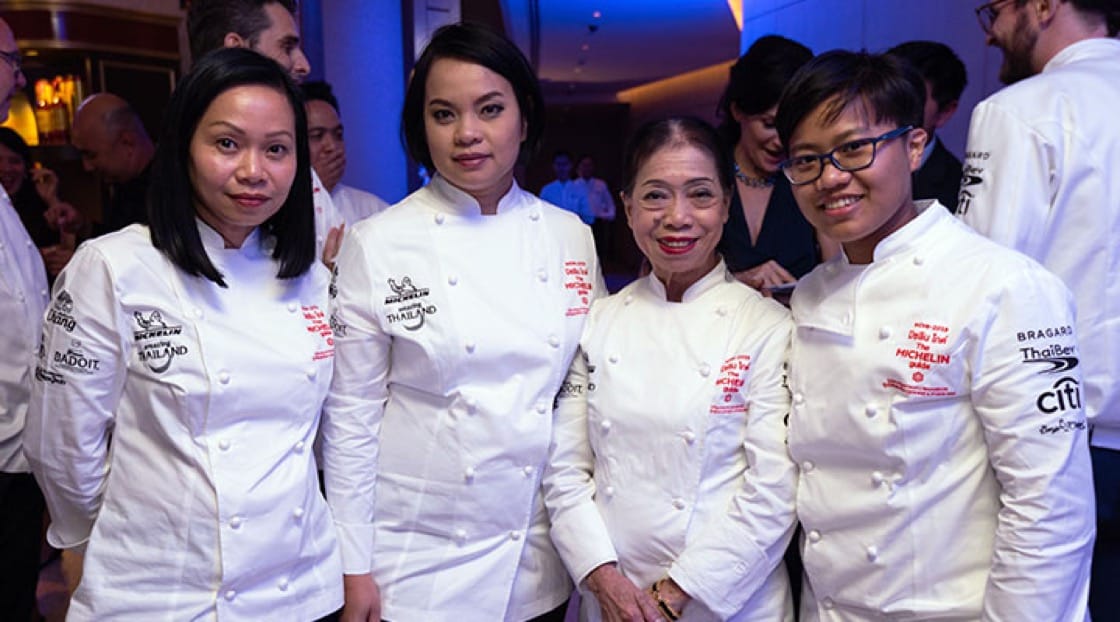 The growing number of nods toward Thai female chefs helps illustrate the growth in women chefs’ ranks worldwide. The US National Restaurant Association estimates that the number of female-owned establishments in America has risen by more than 50 percent over the past decade, while the number of British female chefs has risen by a third since 2016, according to data from the Office of National Statistics.

“It’s like, come on women,” laughs Chef Sujira “Aom” Pongmorn, whose way with local ingredients like rice paddy crab and wild tea leaves has earned her restaurant Saawaan its first Michelin star. “We can be a leader now. Who run the world, right? Girls.”

All the same, while growth is there, it remains slow. “Let’s call a spade a spade, women are different than men,” said Chef Garima Arora of Michelin star restaurant Gaa, pointing out that women frequently have to choose between having a family or succeeding in their career, but can rarely do equally well with both.

“Our needs are different, our aspirations are different. We need to make societies, our economies, that include women, not exclude them. That is the real story we should be talking about, not about women in the workplace. We’re already here.” 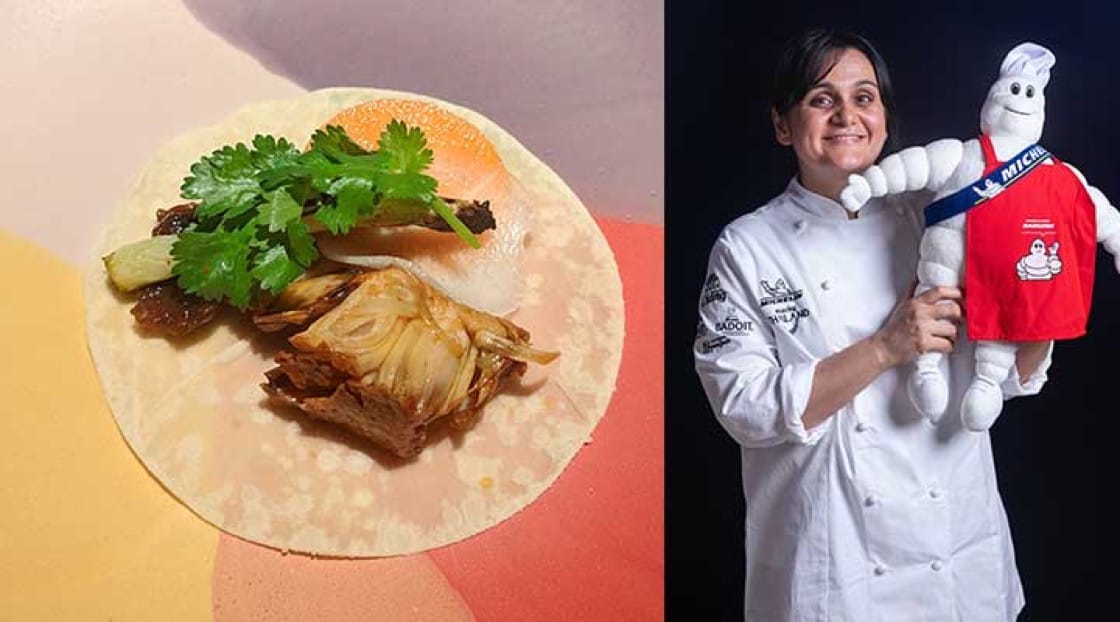 With Gaa awarded a Michelin Star in the 2019 Thailand edition, Chef Garima Arora made history by becoming the first Indian female chef to get a Michelin Star.

Perhaps it is easiest when family life and work are intertwined. Chef Bo Songvisava of Michelin star restaurant Bo.lan, which is run jointly with her husband Dylan Jones, says life in the restaurant and with family are basically the same thing. “Our kids share their precious time in our kitchen. They even help out and are proud,” she said. “We scoped down the size of Bo.lan so that we can give our family quality time as much as we give to our guests. My family is now a priority, especially when they are six and three.”

Chef Bee Satongun of Michelin star restaurant Paste says organisation is integral to keeping the work-life balance intact. “When you decide as a woman to go into this field, you need to be more dedicated and organised with your time,” she said. “The kitchen means long hours, as everyone knows, and then your baby needs you as well … It’s a lot of balance.”

The long hours as a chef haven’t deterred Chef Bee’s daughter, Sydney, from thinking of joining the ranks of the next generation of Thai female chefs. “She already says she wants to be a chef, so I don’t have to do anything!” Chef Bee says, laughing. “You know, she said to me, ‘Mom, how many stars are you gonna get this year?’ She already knows about all of this.” 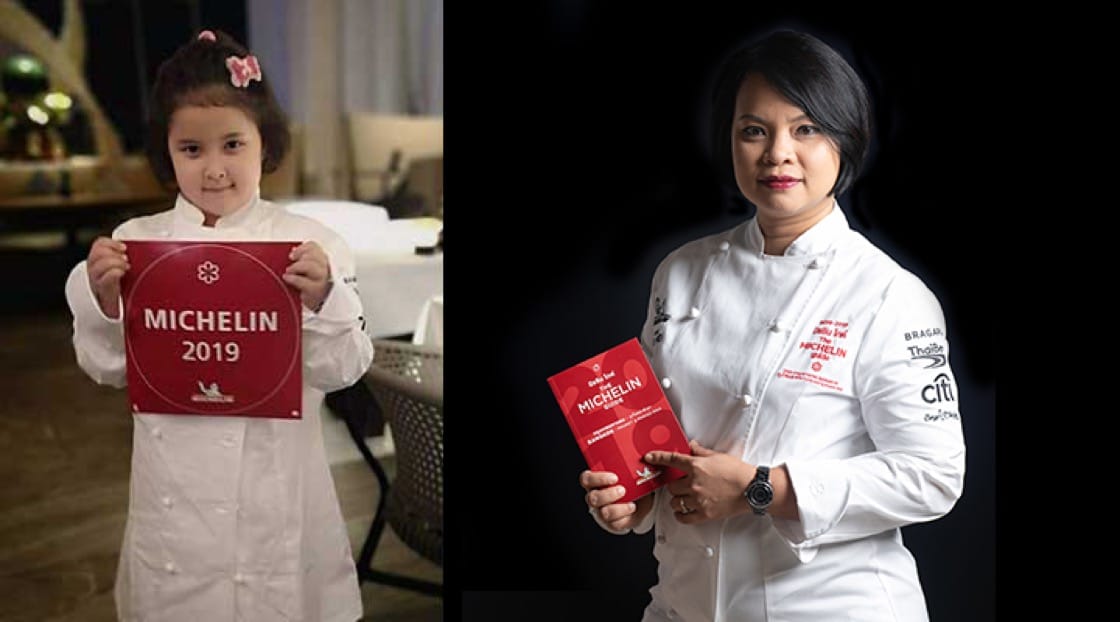 Here's what our inspectors said about Gaa (one Michelin Star)
Modern eclectic cuisine that blends traditional cooking and innovative techniques is served here. Locally sourced ingredients are transformed into something unexpected. Diners choose between the 10- and 14-course tasting menus which are changed quarterly to reflect seasonal specialties. Signature items include chicken liver mousse and cauliflower with caramelised whey. Wine and juice pairings are available.

Here's what our inspectors said about Nahm (one Michelin Star)
After establishing her reputation in San Francisco, chef Pim is now at Nahm to pursue her passion for Thai cuisine in her homeland. Maintaining the restaurant's legacy of quality cuisine, Pim has added her own influences and flavours, which have taken the menu to another level. Every dish also displays extra creativity and attention to detail. Must-tries include the intense and aromatic red curry duck with snake fruit and sour yellow eggplant.

Here's what our inspectors said about Paste (one Michelin Star)
The striking interior is dominated by a spiral sculpture made from hundreds of silk cocoons, floor to ceiling windows, and unusual curved booths that offer privacy. The designed-to-share menu draws inspiration from royal Thai cuisine and uses century-old cooking techniques with ingredients often sourced directly from local growers. Signature dishes include roast duck with nutmeg and coriander; fragrant hot and sour soup with crispy pork leg; and yellow curry from the Gulf of Thailand. Service is attentive but not overbearing.

Here's what our inspectors said about Saawaan (one Michelin Star)
'Saawaan' means 'Heaven' in Thai, which is exactly where Chef Aom wants to take you through her authentic Thai cuisine. Available only in a set 10-course menu, dishes are full of creativity and well executed, providing a truly special journey through Thai flavours, culture and art. The seasonal ingredients are locally sourced, such as organic rice paddy crab from Sing Buri, or squid from a small fishermen's village in Krabi.

Here's what our inspectors said about Jay Fai (one Michelin Star)
Jay Fai is a place that both taxi drivers and foodies wax lyrical about and it's easy to see why. Wearing her signature goggles, the local legend that is Jay Fai continues what her father started 70 years ago and makes crab omelettes, crab curries and dry congee.

Here's what our inspectors said about Suan Thip (one Michelin Star)
Beyond the bustle of Bangkok's busy streets, stepping into Suan Thip feels like entering another world. Its lush garden of trees and small ponds is peaceful and pretty, while a Thai-style pavilion is the perfect setting for weddings and celebrations. Inside, the relaxed vibe continues with views to the riverside, while the refined cuisine is inspired by royal recipes. Many of the staff have been here for decades; even the chef is second generation.

Here's what our inspectors said about Ruean Panya (one Michelin Star)
This family run restaurant, which blends food and art, is a hidden gem. It's spread across four houses; the relaxed mood gives the impression of dining at friends, while painting-filled interiors add a gallery feel. Owner Pannee does all the cooking herself; her attention to detail and the complexity of flavours make her dishes worth the wait. Mud crab coconut dip or 'Lhon Pu' and toasted giant prawn with salt are highlights.

Here's what our inspectors said about Bo.lan (one Michelin Star)
Chef couple Duangporn Songvisava (Bo) and Dylan Jones (lan) have been serving royal Thai dishes to much fanfare for nearly a decade. The heritage of the cuisine is respected, but there is a touch of modernity in the presentation. Real care and effort is put into the ingredients and flavour, along with a zero-carbon goal - choose from two degustation menus that demonstrate the chefs' passion. The attractive and intimate villa is charmingly run.

“While cooking, Dad, who I trust wholeheartedly, never said ‘You shouldn’t do this or that.’ That gave me confidence to pursue a culinary career.”

With her family roots steeped in northern Thailand and Laos, it’s no surprise that Chef Bee Satongun is opening a second branch of Paste in the charming UNESCO listed city of Luang Prabang.

Two months after the whirlwind launch of the first-ever MICHELIN Guide in Bangkok, chefs are looking ahead to a year of improvement, new restaurants, innovation and maybe more stars.

The recent arrival of the MICHELIN Guide in Bangkok has once again thrusted Thai cuisine into the international spotlight. With 7 of the 17 Michelin Starred restaurants in Bangkok serving Thai food; 4 are headed by female chefs. On a quiet corner table near the window of the newly crowned Michelin starred restaurant (Paste), we ask Chef Bee Satongun what cooking means to her and her views on Bangkok’s dining scene post Michelin Guide’s arrival.