With the help of MICHELIN Inspectors, we’ve put together some dos and don’ts for eating Japanese omakase and listed where to get the best omakase experience in Bangkok.

In many ways, an omakase course is like a tasting menu where the freshest ingredients of the season are served to the diners. Derived from the Japanese verb ‘makaseru’ (to entrust), the term omakase refers to entrusting the chef to serve you what he deems best for the meal. An omakase course consists of nigiri, sashimi, and sometimes a cooked dish which showcases the beauty of the seasonal ingredients. Like any other fine-dining culture, there are a few omakase faux pas every diner should be aware of.

Understanding Omakase
Few dining experiences are as revered or as intimidating as omakase, a form of Japanese dining where guests leave themselves in the hands of a chef and receive a meal which is seasonal, elegant, artistic and uses the finest ingredients available.

True omakase experiences are up close and personal with many restaurants seating only eight to ten diners at a time, while the chef prepares food in front of you and observing your every expression when you eat.

In many ways, omakase is a spiritual companion to kaiseki, the elaborate multi-course Japanese meal built around seasonality, quality ingredients and simple preparations. While kaiseki is a highly ritualised meal with a specific ebb and flow, omakase changes with each occasion, sometimes with the chef making decisions about what to cook mid-course.

The truth of omakase lies in the word itself—directly translated, it means "I leave it up to you." 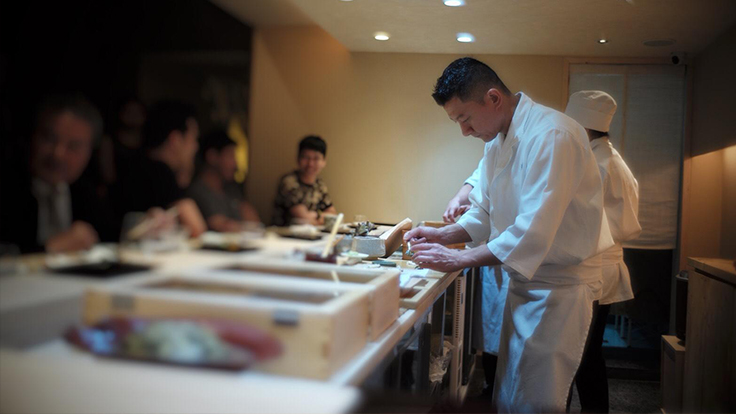 Here’s a list of the best Japanese Omakase Restaurants in Bangkok
Ginza Sushi Ichi (One MICHELIN Star)
Centrally located in the Erawan mall, this sushi restaurant belongs to a group that started in Tokyo and now has branches in Jakarta and Singapore. To maintain the quality, produce is delivered straight from markets in Tokyo every 24 hours. There are two dining rooms with counter seating, so every customer gets a bird's-eye view of the chefs in action. Of the four set menus, the Botan and Omakase are the most popular. Service is charming.

Sushi Misaki (MICHELIN Plate)
Chef Masahiro Misaki was lured to Bangkok from Tokyo's Ginza to set up Sushi Misaki. Here, the fish is delivered three times a week and all the prep done pure Tokyo-style. His playful personality keeps it fun and relaxed, while the popular counter bar, seating 10, mixes up the seating options. The décor too is a mashup between Thai and Japanese but it's no matter, as food is the real hero. Bookings are recommended.

Sushi Masato (MICHELIN Plate)
After honing his craft in Tokyo and building his reputation in New York City, Masato Shimizu opened his eponymous omakase sushi bar in Bangkok. Housed on a quiet lane, Sushi Masato is hard to find and only identified by a small sign in Japanese. Once inside, the intimate space and elegant interior create a tranquil feeling. The team of inspired chefs use ingredients sourced from Japan and share their passion for food with customers at the intimate chef's table. Advanced reservations are mandatory.

Sushi Tama (MICHELIN Plate)
Seiji Sudo is the well-known chef who moved here to helm this 6-seater restaurant, where only one omakase 'Sho'-style menu is served. During the meal staff are on hand to explain each dish, leaving the chef to really focus on preparation, which utilises a wide variety of cooking techniques. The differing textures can sometime seem playful but flavours are always clear and consistent. Enjoy the signature soup with sushi rice.

Tempura Kanda (MICHELIN Plate)
This is one of the first omakase places in the city, which means placing your order in the hands of the chef. But don't let that worry you - the meticulous chef has several years of experience working in Japanese kitchens, while the rest of the staff have at least two. The tempura uses only seasonal vegetables, as well as seafood. Décor-wise the interior sticks to a simple script, with a marble-topped counter adding some charm. Booking is essential. 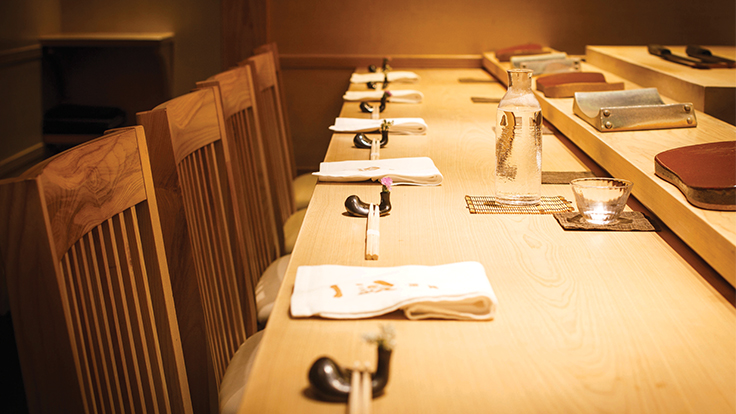 Ginza Sushi Ichi has been the only Japanese restaurant awarded a MICHELIN Star in the MICHELIN Guide Thailand for two consecutive years.

Bib Gourmand Behind The Bib Ayutthaya
Dining Out 1 minute

Vegetarian Bangkok vegetables
All articles of Dining Out

Devout sushi lovers listen up. Three MICHELIN Stars Chef Kenji Gyoten is in town and you wouldn’t want to miss his Edomae sushi.

Delicately fried tempura, slices of tender Hida beef, mind-blowingly fresh bites of nigiri— here’s where to get the best Japanese food in Bangkok and Phuket.