The First Day We Got Our Stars: Ikuya Kobayashi

Ikuya Kobayashi has a boyish face and a shy laugh, and standing behind the counter of Sushi Saito in Hong Kong, he looks almost too young to be the head chef of a world-renowned restaurant.

In truth, he is young. Born in 1988, the 30-year-old has been an apprentice of the “God of sushi”, or Sushi Saito’s founder Takashi Saito, for just eight years. But with sheer tenacity and practised skill, he’s received the stamp of approval from his mentor and was then chosen to helm the new Hong Kong outpost. Under his charge, Sushi Saito was awarded two Michelin stars in the MICHELIN Guide Hong Kong Macau 2019 — proving his worth and living up to his mentor’s affirmation in one fell swoop. 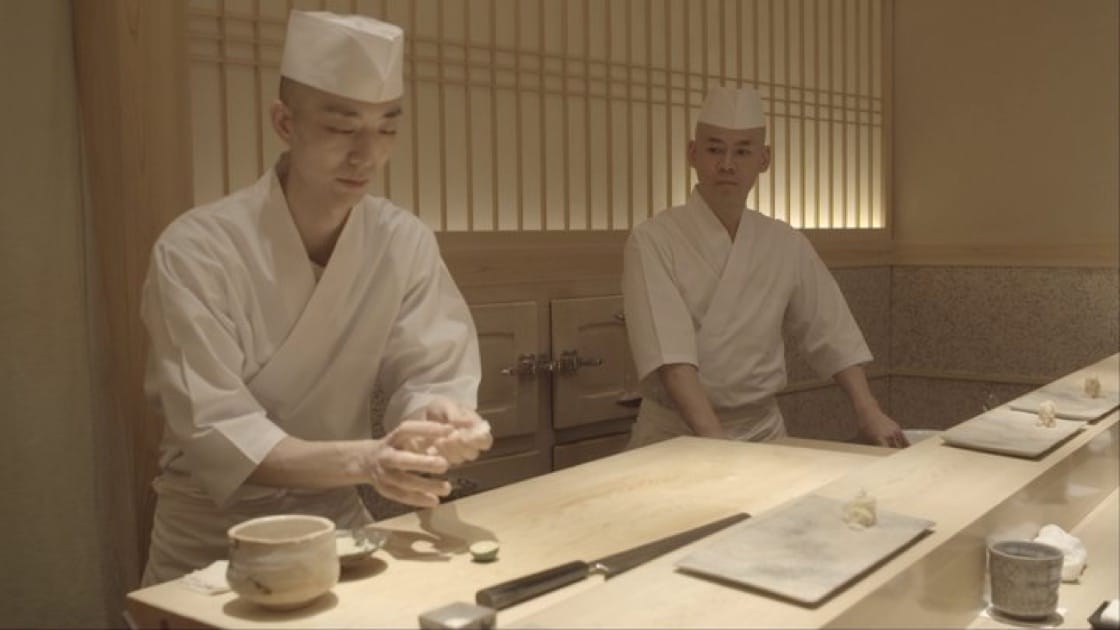 At Sushi Saito in Tokyo, Kobayashi is Saito’s trusted right-hand man.
Behind The Sushi Counter

Recalling his journey to becoming a sushi chef, Kobayashi says that he was originally trained in French cuisine but when he had an opportunity to watch master sushi chefs at work, he was utterly amazed by their artistry and incredible skills and poise. “Since then, I knew I wanted to become a sushi chef.”

With that, he enrolled in culinary school and immersed himself in Japanese cuisine. Around the time he was due to graduate, Saito paid a visit to the school looking for recommendations for promising students to work with him. Kobayashi says: “He wanted someone tough and hardworking enough to join his team. Then, my teacher referred me to chef Saito and so I started my career at Sushi Saito.”

The first two years in Sushi Saito, Kobayashi was relegated to cleaning and serving tea, but his determination and perseverance soon gained him the trust of his mentor, bit by bit. Gradually, he started learning different kinds of techniques, working his way up to become Saito’s second-in-command and earning a place behind the sushi bar, serving guests.
Advertisement
Advertisement 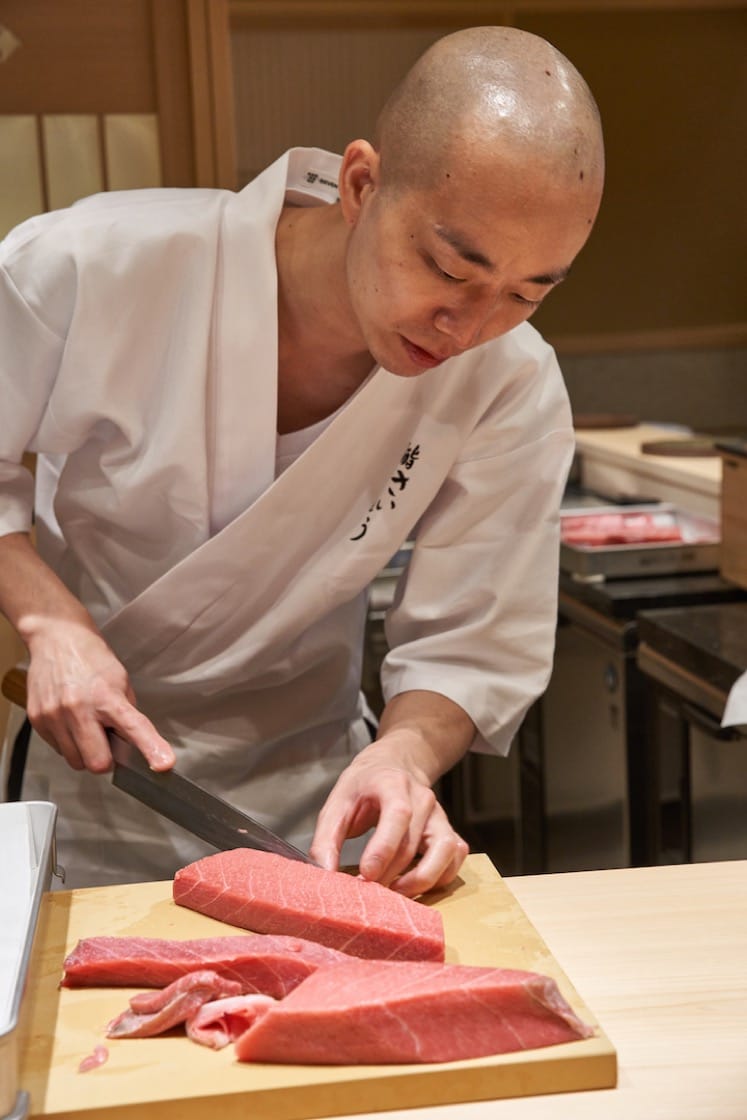 Ikuya Kobayashi helms Sushi Saito in Hong Kong.
A Day In The Life Of A Sushi Master

Describing his days at Sushi Saito in Tokyo, Kobayashi says: “We normally start at 8.30am but everyone always arrives before 8am to start cleaning the kitchen. Once chef Saito is back from the market, we organise the ingredients and start prepping all the fish and seafood. Two hours before our lunch service, we start to prepare the shari (sushi rice). At 11.30am, we would have everything ready for chef Saito to check and taste.”

After lunch service is training time. The chefs take the time to practise the fundamental skills, from chopping spring onions to prepping fish using cheap fish from the market. At around 4.30pm, the team would then start prepping for dinner service at 6pm. “We usually finish at 11.30pm. That is our usual 16-hour work day, every day.”

Kobayashi admits that the tough lifestyle has led to thoughts of quitting. “I still remember after working at Sushi Saito for the first year, I wanted to quit. However, chef Saito told me I should not give up. So, I pushed myself to continue and have become one of the longest-serving staff in the team.” He guesses that it was his perseverance that led Saito to select him to helm the Hong Kong outlet.

He reckons that his role is similar in both countries. “Every day I check for quality and serve guests by making sushi at the sushi counter.”

As for the most important lesson he’s learnt from his mentor, he says: “It would be how chef Saito treasures every single guest, no matter their background and status; he still serves with his best and treats everybody as well.”

The same spirit has been imbued in Kobayashi’s creations. “I put my soul into everything I do, from prepping the fish to preparing shari, from making a piece of nigiri to serving every single guest. I want to pass on my passion to every guest through every single piece of sushi.” 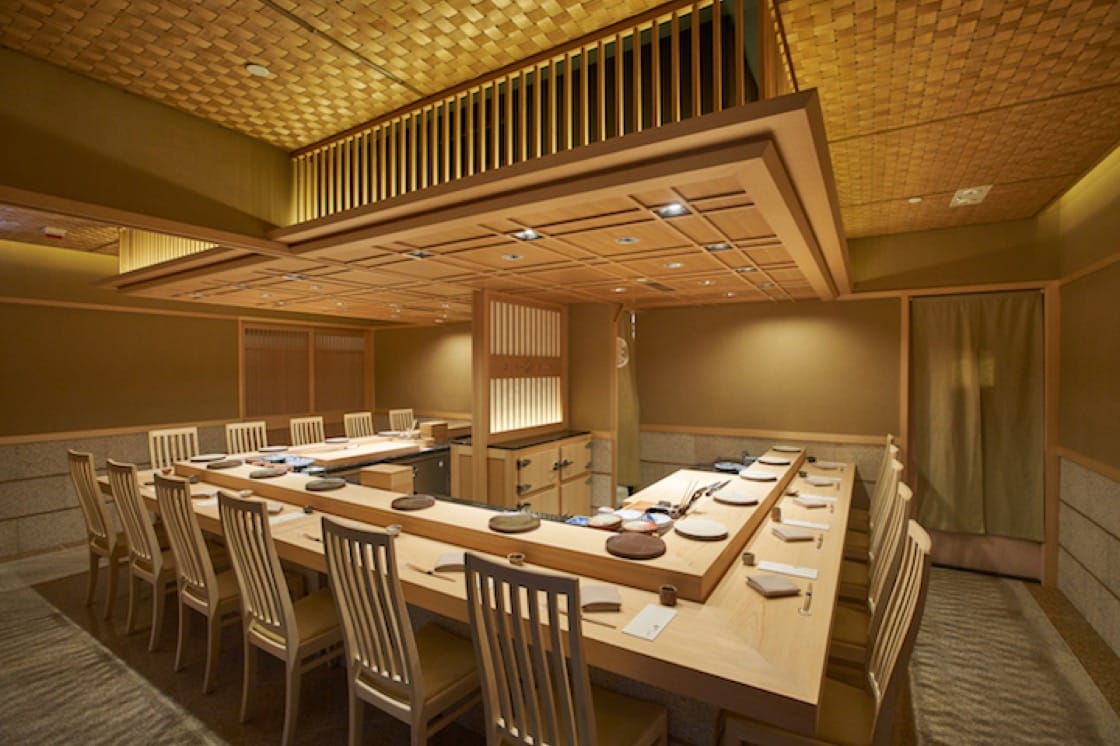 Sushi Saito is located on the 45th floor of the Four Seasons Hotel in Hong Kong.
When was your first encounter with the MICHELIN Guide?
When I was in culinary school, I heard about MICHELIN Guide but I did not have much idea about what it was until I started working under chef Saito and, when he got three stars, I finally realised it was a big deal.

What was your feeling when your restaurant received not just one, but two Michelin stars?
That was a really nice surprise to us as we had only been open for eight months.

How did you celebrate?
I had a wonderful time with all the great chefs at the MICHELIN Guide Hong Kong Macau Gala Dinner. Afterwards, I celebrated quietly with my wife. I always prefer a more low-profile celebration; it’s a very Japanese thing.

How does the MICHELIN Guide influence your career?
Throughout my career, I have been working under chef Saito and his three Michelin stars. As chef Saito says, the most important thing is to give every guest the best, make sure our guests enjoy our sushi and are happy with our dining experience, nothing more than that. The recognition of the MICHELIN Guide lets us know we are on the right track.

What suggestions would you give to young cooks who want to get a Michelin star?
I am not in the right position to answer that as the two Michelin stars we got really belongs to chef Saito. However, as chef Saito reminds us all the time, it is not about aiming for the stars, but to want to give our guests something delicious to enjoy, to keep on giving our best and never give up.
RELATE: What The Inspectors Say about Sushi Saito
This article was written by Mandy Li and translated by Rachel Tan. Click here to read the original version of this story.
Advertisement
Advertisement