This year’s durian season has opened with a spike in supply as a bumper crop of the King of Fruit is streaming in from Malaysia.

Over the past two weeks, durian sellers have received a bonanza of durians in truckloads from Johor, Pahang and Penang, thanks to favourable weather, a peak flowering season for durian flowers and lower demand during Ramadan. The main durian season in Singapore is typically from June to September.

This boom in supply has led to prices being slashed by up to 50%. The popular Mao Shan Wang durian, which is well-loved for its bittersweet creaminess, is now priced at around $20 per kilogramme. It is typically priced at $30 per kilogramme. 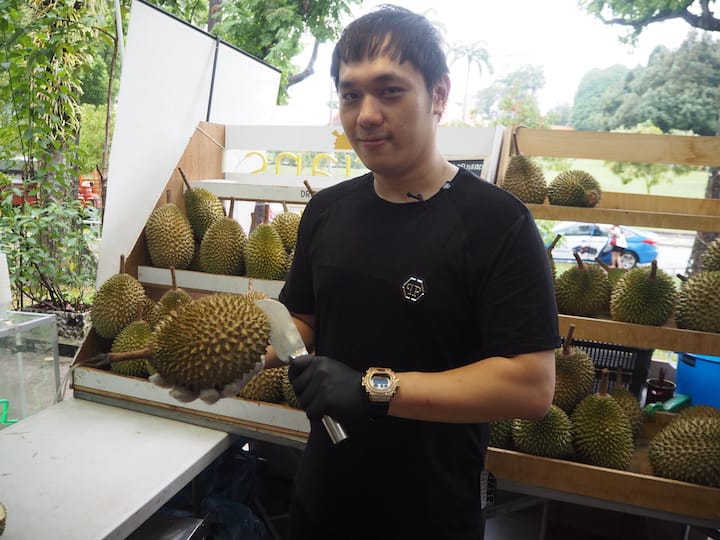 Charles Phua, managing director of Dr Durian, brings in about six varieties of durians, from D13 to Mao Shan Wang. (Photo: Kenneth Goh)
With the drop in durian prices, durian fans have been flocking to fruit shops to satisfy their ardent craving for the pungent fruit. With so much buzz over durians, herein lies a thorny issue: how to select the durians and know that you are getting the real deal.

It can be intimidating, at times, when you are selecting your durian while durian sellers are pressuring you to make a snappy decision or shooting daggers at you. Shedding some light on “durian-buying etiquette” is Charles Phua, managing director of Dr Durian, a two-year-old durian shop, which brings in about six varieties of durians, from D13 to Mao Shan Wang. The 30-year-old former e-commerce sales manager is part of a new generation of durian sellers who are modernising the trade with hip packaging and a social media and online presence.
Advertisement
Advertisement

The easiest litmus test of a durian’s freshness is to scratch its stem gently with your fingertips. If the stem reveals a fleshy and leaf-green interior without much effort, it is a sign that the durian had fallen off the trees within the last 24 hours.

The smell wafting from the fruit is also an indicator of its freshness and taste. Request the durian seller to hold up the fruit and sniff along the seams and split lines along the top part of the durian that is closer to the stem. Phua explains: “Smell the top part of the fruit or as close to its stem as possible as the top husk is much thinner than the bottom, which allows the smell of the fruit to penetrate through easily.”

In general, there are two types of smells from durians. If the scent is fresh and reminiscent of green leaves, it is a sign that the durian flesh is sweet. If there is a slightly pungent smell, it could point to some bitterness in the flesh. If a durian does not emit a smell, it means that is unripe. If the aroma is too intense, it is a sign that the fruit is overripe. To prevent yourself from getting poked by the durian spikes when sniffing, place your hand on the durian before you bring your nose close to the fruit. 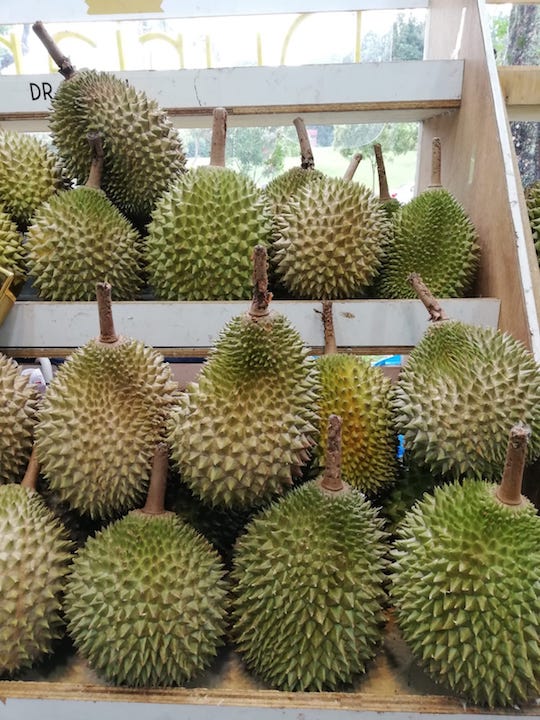 3. Look At The Shape Of The Fruit

Contrary to popular belief, a perfectly oval and rounded durian is not always the best. One should give odd-shaped fruit a chance too. Odd-shaped fruit can come in slightly curved and crescent shapes.

Although an odd-shaped fruit contains fewer chambers and flesh-covered seeds, the flesh can be more flavourful and intense, with a meatier and creamier texture. Phua adds that bigger is not necessarily better. He adds that the optimum weight of durian is 1.5 to 2kg, which yields the best flavours.

4. Listen Out When The Durian Seller Taps On The Fruit

Durian sells are often seen tossing the fruit around their gloved hands and tapping it repeatedly with an offset spatula. The main aim of this “toss and tap” action is to check which parts of the fruit is ripe. Phua says that if a durian is ripe, it should be “sound like hitting a drum”, as the fruit is more hollow with gaps of air inside the fruit. Listen out for tapping sounds when the seller shakes a ripened durian as the seeds should have loosen up. 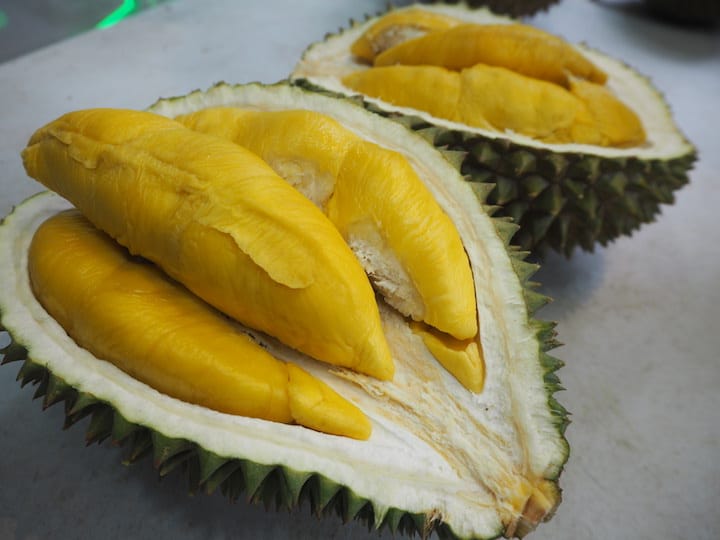 Look out for the colour and texture of the durian flesh after the durian seller has plied it open for you. (Photo: Kenneth Goh)
5. Appearance Matters

After the durian has been plied open, look out for the colour of the durian flesh. If it is bright yellow, the meat is usually sweet, such as those of D24 durians. If you spot greyish shades at the sides of the flesh, expect the meat to have a tinge of bitterness. It can be found in Black Pearl and some Mao Shan Wang varieties.

Use a glove to plod the flesh: it should be soft, springy, slightly sticky and almost custard-like. Instead of touching the flesh-covered seed, Phua advises customers to sample it to decide if one is satisfied with the quality of durian.

6. Do Your Homework Before You Buy

Phua advises buyers to have an idea of the flavours they desire from durian (varying shades of sweet or bitter) and textures (creamy or fibrous). Also, come with an open mind to try other varieties, aside from the usual Mao Shan Wang and D24.

To guard against being cheated, Phua advises customers to look up on comments left by customers on the company’s social media sites and in public forums. Watch and observe the durian sellers when they are taking out the flesh-covered seeds from the husk and pack them into boxes.
RELATED: Guide To Durian: Know The Difference Between Mao Shan Wang And D24
Advertisement
Advertisement