Michelin has announced the closely-watched MICHELIN Guide Bangkok, Phuket and Phang-Nga 2019 Selection. In its second edition, the world-renowned guide recognises 27 dining establishments in Bangkok and Phuket — 23 of them are awarded with one star each and four attain two stars each.

Sühring, a contemporary European restaurant in Bangkok, is elevated to a two-star rating after it was lauded with one star last year. The restaurant joins three other two-Michelin-starred restaurants — Gaggan, Le Normandie and Mezzaluna on the list.

Popular Thai shophouse restaurant, Jay Fai, retains its one-star accolade and is the only street food eatery in the honour roll.

Chefs from dining establishments that received stars in the MICHELIN Guide Bangkok, Phuket and Phang-nga 2019 selection.
Gwendal Poullennec, International Director of the MICHELIN Guides, says: “This year’s guide is a reflection of the growing talent in Thailand’s culinary scene with many new restaurants added to the selection, including 13 specialising in Thai food, reinforcing Thailand’s reputation as a go-to destination for gastronomy.”

He adds: “With Thailand’s Andaman Sea offering an opulence of refined ingredients and endless culinary inspiration, it’s no surprise that Thailand’s south is home to one of the most innovative restaurants in our selection.

“Furthermore, the very coveted club of Michelin two star restaurants widens in Bangkok with the addition of Sühring who have built on their success of last year.”
Advertisement
Advertisement


Thai cuisine is prominently featured among the new one-starred restaurants — seven out of 10 restaurants in the list serve Thai cuisine. Contemporary restaurants include Le Du, which received a Michelin Plate last year and Saawaan, which uses local Thai ingredients such as organic rice paddy crab from Sing Buri and squid from in Krabi.

Another new one-star restaurant is crowd favourite Methavalai Sorndaeng, which is known for dishes such as crispy rice noodles in sweet and sour sauce, and spicy lemongrass salad served alongside with live 1980s Thai music and views of the Bangkok's iconic Democracy Monument. 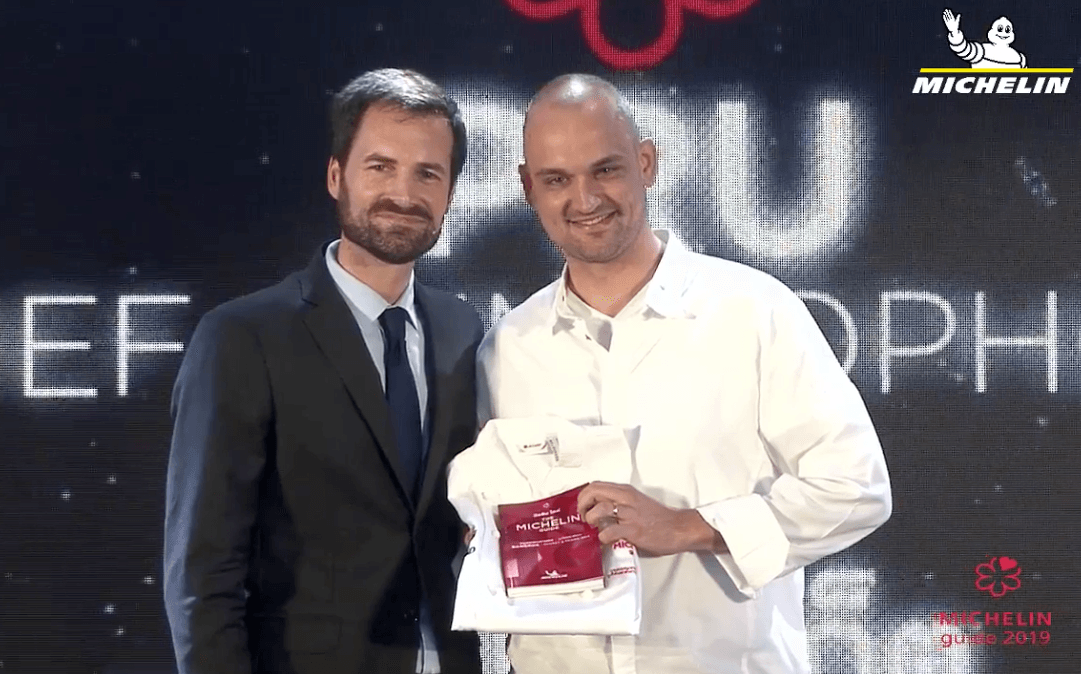 PRU's head chef Jimmy Ophorst receiving the restauran's one-star accolade from Gwendal Poullennec, International Director of the MICHELIN Guides.
The MICHELIN Guide Bangkok 2019 also extends its reach to two Southern regions, Phuket and Phang-nga for the first time. In Phuket, innovative restaurant Pru receives one Michelin star. The restaurant, which is situated in a luxury resort, uses many ingredients from its 96-hectare organic farm and uses milk sourced from Krabi to make its in-house butter.

Restaurants with one Michelin star

Behind The Bib Michelin Guide
Dining In 3 minutes