Upscale Chinese restaurants used to be the go-to venues for Hong Kong diners to mark celebrations of memorable occasions - but no longer. Western steakhouses, too, can provide a sense of grandeur worthy of your big day. These five steakhouses in Hong Kong offer extra indulgences for the meat-lover, while providing unique qualities for an unforgettable dining experience. 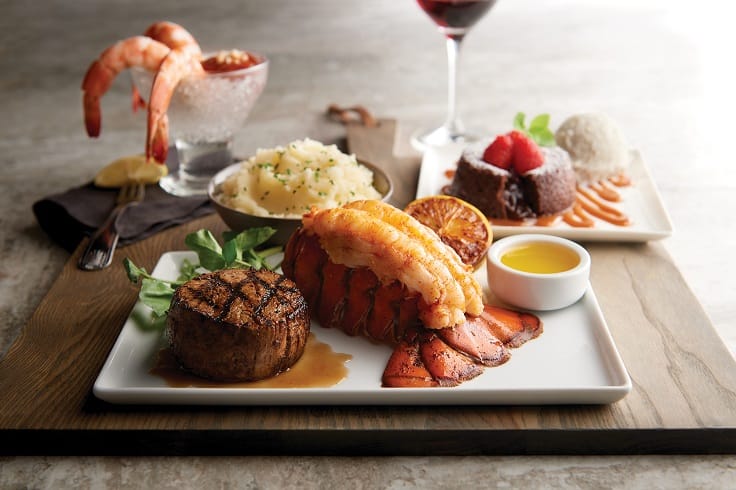 This waterfront steakhouse in Tsim Sha Tsui is endowed with sweeping views of the Victoria Harbour, whose beauty is echoed by the restaurant's refined interiors. Seats are abundant to accommodate groups of various sizes, but if you are crowd-averse, reserve a table during the lunch hour for a quieter environment and cheaper food.

The menu encompasses different cuts of aged grain-fed beef from the US and signature seafood dishes such as Jumbo Lump Crab Cake and Jumbo Shrimp Cocktail.  Highlights for meat lovers include the porterhouse steak, signature cut prime New York strip, finished off with Morton’s legendary hot chocolate cake. Nothing goes better with the captivating night view than that. 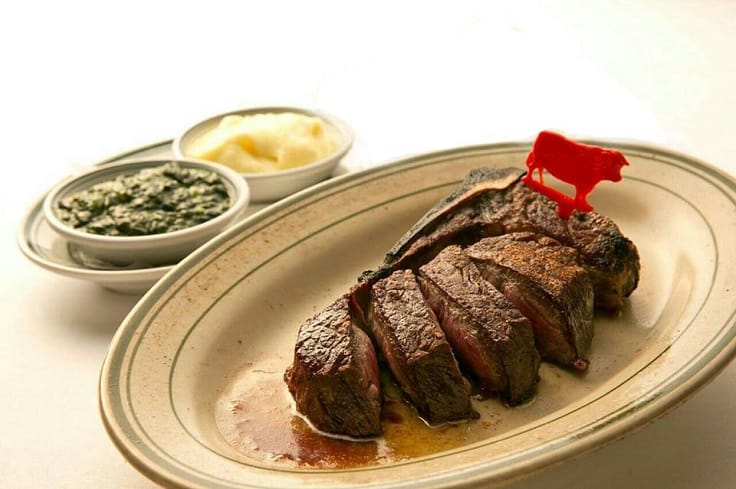 The Central branch of Wolfgang's Steakhouse by Wolfgang Zwiener carries on the restaurant chain's reputation for meticulously dry-aged steaks. Made of prime USDA beef from the US, the steaks are matured in the in-house dry-aging room with rigorous temperature control. Other than the 28-day dry-aged beef, the Beverly Hills Chopped Salad, Lobster Mac n’ Cheese, and homemade Wolfgang’s Cheese Cake are must-orders.

Tables can cater to two people to up to a dozen in the simple, wood-based dining space. The outlet also has a bar area for a post-dinner night cap. 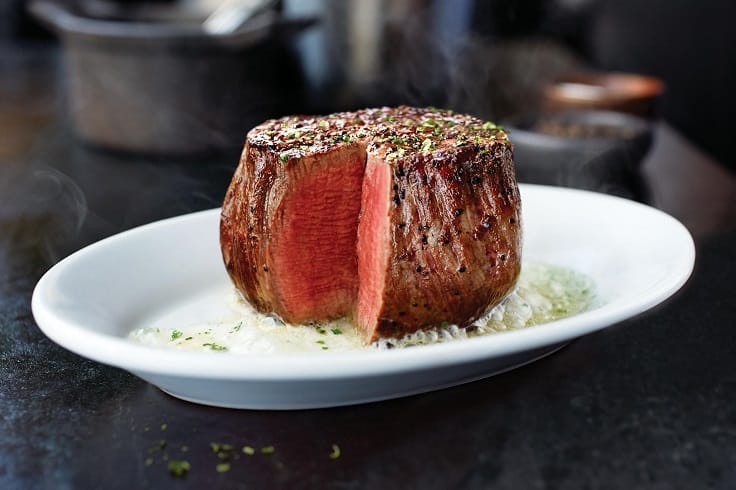 Ruth’s Chris Steak House (Admiralty): A Taste of the Classic

This steakhouse chain originated in New York more than a half century ago, and continues to draw regular patrons today for its timeless feel. The Admiralty branch is kitted out with vintage theme, its interior dominated by textures of oak wood. There are seats for every occasion, as the vast dining area is fitted with a bar table, high tables for two, booths for four and large tables for group dinners.

Food-wise, the classic ribeye is highly recommended, alongside the Barbecued Shrimp and Sizzlin’ Blue Crab Cake. 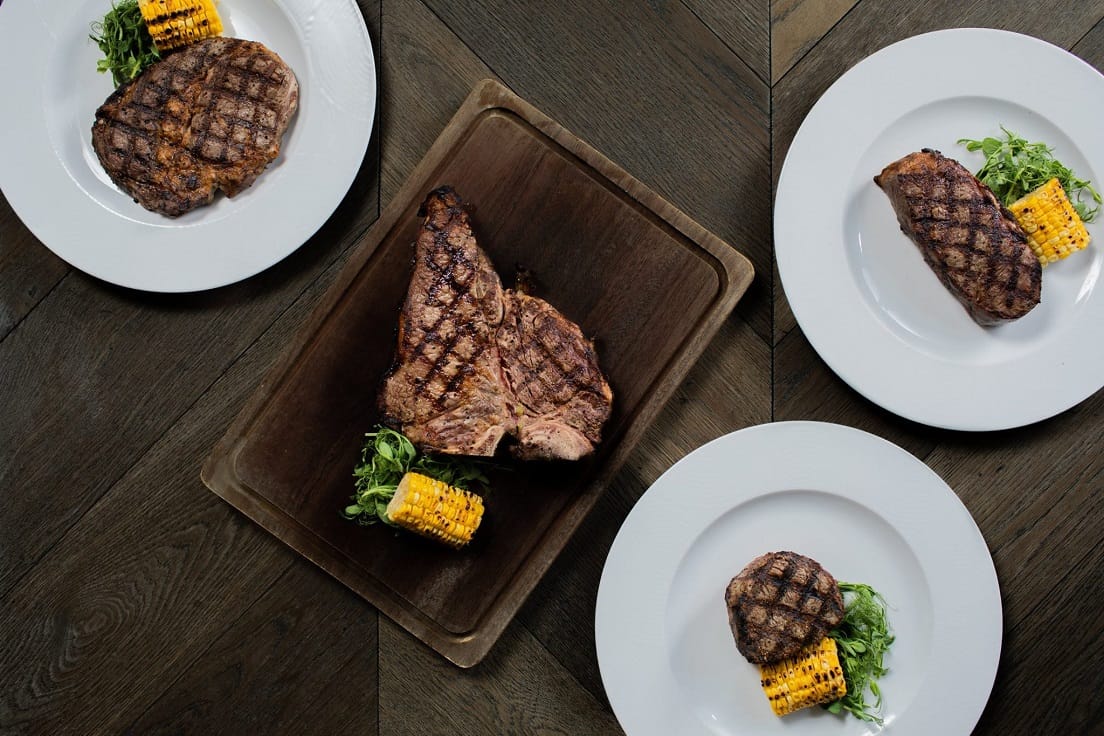 Porterhouse may be located along Hong Kong's notoriously boisterous Lan Kwai Fong bar strip, but it is a world of difference once you step through the restaurant's doors. The dining room is decked out in chic and understated tones of gold and white.

Porterhouse offers reasonably priced lunch and brunch sets. Its weekend Surf and Turf options are popular: you get to taste a large variety of food for around HK$600 per head. The a la carte items include a wide selection of meats, cuts and ageing methods. For the uninitiated, the "Chef's Blind Tasting" option will get you a selection of 3 cuts of beef, and you can taste either the same cut from a different breed and country, or different cuts from the same animal. 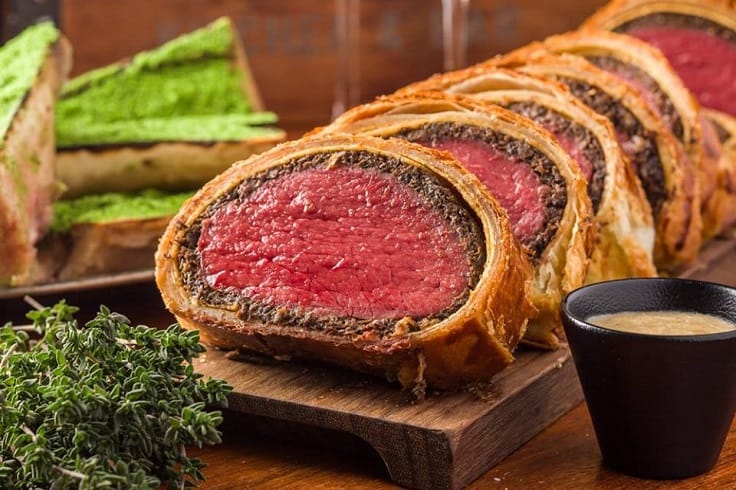 Hong Kong is by now no stranger to the culinary philosophy of Gordon Ramsay, whose maze Grill at Harbour City is his third restaurant in the city. The environment is minimal and classy, flush with black and wooden tones, while the floor-to-ceiling windows and alfresco seats fully showcase the allure of Victoria Harbour.

Meats come in a wide array of preparation styles, including Ramsay's trademark Beef Wellington. Dine here in a bigger group so you can share more hearty dishes such as the Traditional Ploughman’s Pork Pie, the Special Confit Duck and Watermelon Salad, and quality steaks cooked over charcoal in a Josper grill. From the dessert menu, the Steamed Syrup Sponge as well as Coconut and Dark Chocolate Cremaux are crowd-pleasers.

This story is written by Joe Chan and translated by Vincent Leung. Click here to read the original article.
Advertisement
Advertisement