Think twice before you slurp up your next bowl of pho as the dish has a rich background that reflects Vietnam's cultural heritage.

Pho – that delicious Vietnamese beef noodle soup – has been on the rise lately, not just in Asia, but across the world. It’s no different here in Hong Kong as more than a few pho specialists have popped up over the last few years. In fact, one of them, Brass Spoon in Wan Chai received its first Bib Gourmand accolade just in October last year, attesting to the quality of the options we get here.

“Pho is a deceptively simple yet complex dish that is considered by many as the national dish of Vietnam,” explains Vietnamese-American chef Peter Cuong Franklin. The chef and founder of Anan Saigon Restaurant in Ho Chi Minh was in town this past May at the invite of Test Kitchen to present his new dishes.

A quick glance at a bowl of pho could explain why it’s often mistaken as simple. 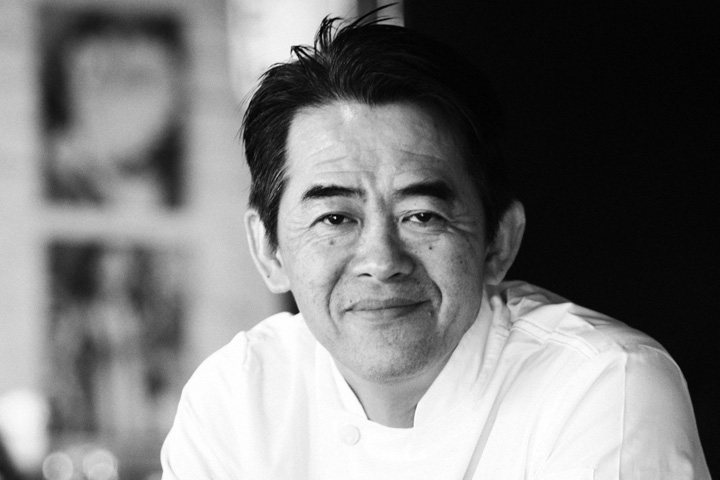 Chef Peter Cuong Franklin.
“One can dissect pho into three major essential elements,” says Franklin. “The beef broth which forms the basic foundation of the dish, the rice noodles which constitute the body and the green herbs and garnishes that gives the dish its unique taste and individual character.”

In truth, the broth is a masterpiece of complexity that’s similar to a French beef consommé. “It’s generally made by simmering beef bones, brisket, flank steak, charred onion, and spices, taking a full day or even overnight to prepare properly,” explains Franklin.

Cultural Influence
This comparison is not without basis as Vietnam is at the crossroads of various cultural influences. As such, a bowl of pho is more than just a culinary creation; it is the expression of multiple aspects of the Vietnamese identity.

“Due to the millennium of Chinese rule and nearly a century of French colonialism, Vietnamese language, art, culture and cuisine have been profoundly influenced by China and France,” says Franklin. 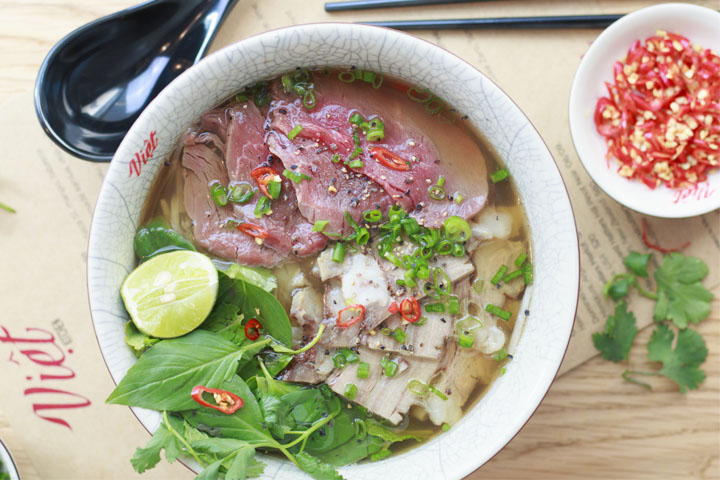 A bowl of pho from Viet Kitchen.
When it comes to pho, the chef believes that it started out as noodles in chicken or pork broth but the well-loved beefy version only came about after French colonisation when the meat was introduced into local diets.

Then, there’s the fact that it’s enjoyed with chopsticks – a consequence of Chinese rule – and one that’s resulted in Vietnam being the only Southeast Asian country to use chopsticks as daily utensils.

Even the name of the dish is said to have either Cantonese or French origin.

“Some suggest that the word phở is based on the Cantonese pronunciation of the character “fan” for rice,” says Franklin. “Others contends that phở was borrowed from the French word “feu” as in “pot-au-feu”, a classic French dinner with boiled beef and vegetables.”

How To Make The Perfect Beef Pho
Cantonese, French or indigenous, there’s no denying that the broth is the soul of the bowl. 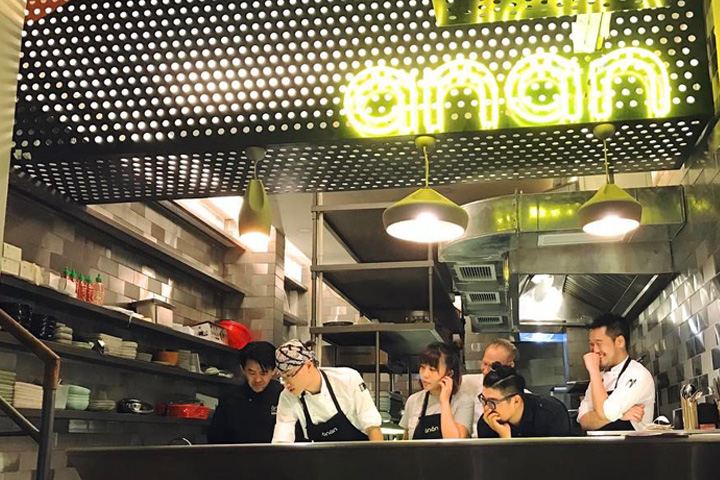 The team at Anan Saigon Restaurant, Chef Peter Cuong Franklin's Ho Chi Minh restaurant. Photo credit: Anan Saigon
“The stock is then flavoured using the high grade fish sauce such as those from Phu Quoc Island in Vietnam, known for producing some of the best fish sauce in the world,” says Franklin. “The result is a clean and flavorful soup broth with a hint of spice.”

An excellent bowl of pho should also use rice noodles made from quality rice grains which gives the right texture and taste. “These days, this type of noodle is found only in quality noodles shops mostly in the north of Vietnam,” explains Franklin.

Such ingredients aren’t the easiest to source in Hong Kong, and while the chef is now based in Ho Chi Minh, it’s something he’s had to deal with as he was based here as he founded and run Chôm Chôm Private Kitchen as well as Viet Kitchen before moving to Vietnam.

“I have to work with local producers in Vietnam to bring in specific ingredients such as Vietnamese fish sauce and fresh herbs that are not available in Hong Kong,” he explains.

“Like any great dish, a great bowl of pho is all about balance and harmony of the essential elements.”

There isn’t a lack of top level restaurants, bars and cafes to check out in Malaysia’s capital.

Chef Jose ‘Chele’ Gonzalez of acclaimed Gallery Vask in the Philippines takes us through the flavours of his adopted home.

Here's where to get your fix of this punchy cuisine.

The Tourist's Guide To Nasi Padang

Heading to Indonesia anytime soon? Here's a guide to what's on the table across the archipelago.