The Chinese Executive Chef at Four Seasons Hotel Hong Kong Chan Yan-Tak served up deep-fried fish skin with salted egg yolk during a Chinese New Year event. Its crunchy texture, alongside the gooey paste of salted egg yolk, easily won over the hearts of the guests. This snack will also show up on the menu of Michelin three-star restaurant Lung King Heen from now on. 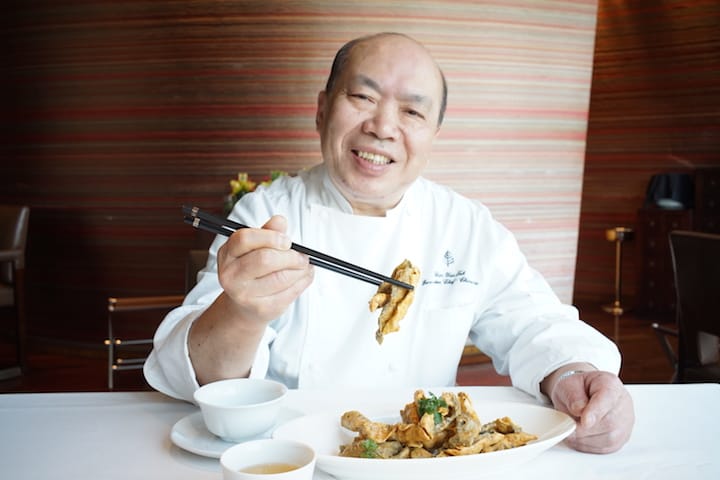 “We’ve had prawns, pork ribs, grouper in salted egg yolk sauce in Cantonese cuisine. The only twist this time is the use of fried fish skin,” Chan said. He chooses the fish skin from Vietnamese basa fish. The skin is found in many markets in Hong Kong. After purchased, it just needs to be stored in a dry and dark place, and is ready for cooking, no advanced preparation required.
As for salted duck egg, Chan hinted that it might be in short supply at a specific time. “During late summer, early autumn, high quality salted duck eggs could be less readily available because a large quantity of them would be bought for mooncake production.”

Chan told us he was inspired by Singapore when he created this dish.

“We have a group of customers from Singapore who come to Hong Kong for conferences several times every year. Based on the famous street food there, we would prepare some afternoon snacks for them. Last year, they wanted to have deep-fried fish skin with salted egg yolk, so we made it for them. They really satisfied with the fish skin we made, vacuum packing all the leftovers to bring back home.”
Advertisement 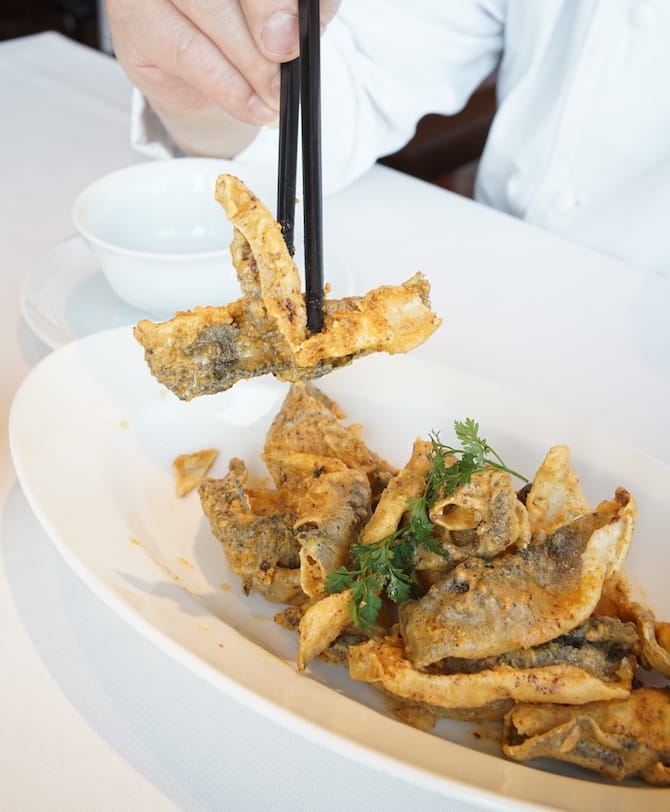 The Hotter the Better
Chan doesn’t go easy on the use of egg yolk. It’s where a large part of the dish’s flavour comes from. His version is indeed eggy. The yolk appears in the form of a sandy sauce sticking to the fish skin. It tastes especially well when eaten hot, right after deep-fried.
Flavour-wise, Chan has total trust towards his colleagues.
“The first time we made the dish, we sent it to our colleagues working in the office for their opinion. They all said it tasted great. Our recipe never changed since then.”

While we were here, Chan also shared with us the meticulous process of testing new items. To better understand their own products, a dish would be tasted at various points – when it’s just cooked, 15 minutes later and half an hour later. For most Chinese dishes, high temperature is always the additional ingredient that turns them up a notch.

“Sometimes we rely on our colleagues at the front of the house to remind diners to finish the dishes quickly,” he added.

Any reader who attempted dishes with a salted egg yolk sauce at home would know the most difficult part is to create a sauce strong enough to be glued on the main ingredient. According to Chan, you just have to shake off the doubt in your mind and be generous with the amount of oil.

“Butter and vegetable oil give the salted egg yolk paste a more liquid texture, so it would adhere to the ingredient. It does make the dish more oily, but there’s no other way to do it. More often than not, good food isn’t the healthiest,” Chan said.

Photo credit: Clarence Chan
This story was originally written by Clarence Chen and translated by Vincent Leung. Click here to read the original version of this story.
Advertisement
Advertisement