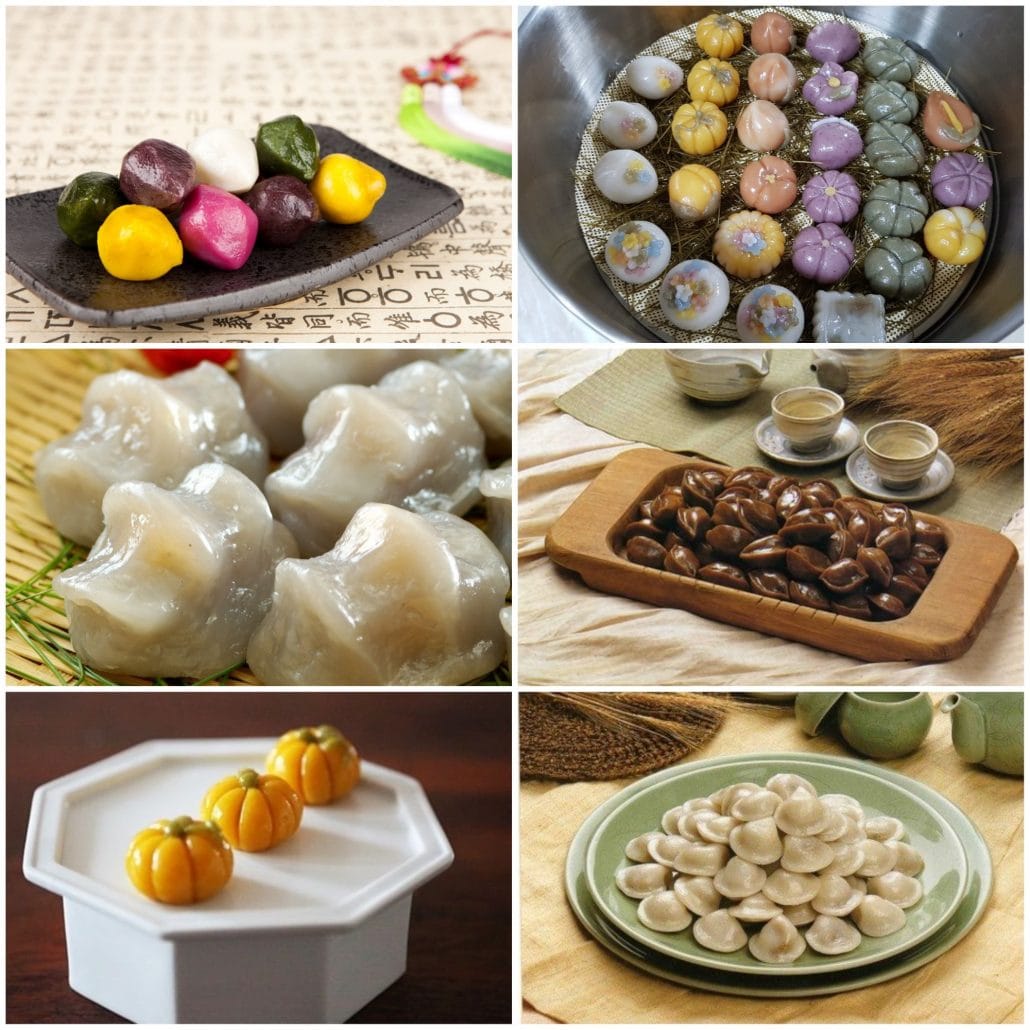 It’s that time of the year again – that transient autumn season with its impossibly blue skies, invigoratingly refreshing crisp air, and pleasant daytime temperatures that compel even the most sedentary to venture outdoors. It truly is the most beautiful time of the year to be in Korea. Autumn also brings with it Chuseok or Hangawi (Mid-Autumn Festival), the biggest holiday of the year on the national calendar, together with the New Year.

In the old days, Chuseok was a celebration of abundance and family, an occasion to give thanks to the ancestors for the year’s bountiful harvest. Although the original meaning and purpose of the holiday has been diluted in modern times, Chuseok nevertheless brings people together, and like most celebrations, tasty holiday treats take center stage.

In China and many other part of Asia including Malaysia, Indonesia, Singapore and Vietnam, mooncakes constitute a central part of the Mid-Autumn festival experience. Just as the full moon-shaped pastry is indispensable to the holiday, so is songpyeon to Chuseok in Korea. Songpyeon is a golf ball-sized rice cake in a crescent moon shape with a sweetened center that commonly features ingredients such as toasted sesame seeds, honey, red beans, mung beans, chestnuts and jujubes.

Traditionally, songpyeon are prepared at home by members of the family and shared amongst friends, relatives and neighbors. The basic dough for songpyeon require mixing non-glutinous rice flour–prepared with newly-harvested rice–with salt and boiling hot water. Adding hot water instead of cold results in a much smoother and chewier texture once the rice cakes have been steamed. The dough forms a substantial wrap around the filling of choice and shaped like a half moon.

Many stories describe why songpyeon is in the shape of a half moon. The most widely accepted explanation is that Korean ancestors thought the round-shaped full moon could only wane while a half-moon would fill up—a sign of abundance and prosperity–as the days went by.

Homemade songpyeon are traditionally steamed over a layer of young pine needles—picked and cleaned ahead of Chuseok–which impart a delectable fragrance to the rice cakes as well as imprinting a delicate comb pattern on their surface. Pine needles also prevent the rice cakes from sticking together during the steaming process as well as preventing them from spoiling thanks to the presence of a chemical compound called terpene.

On the morning of Chuseok, Koreans prepare an elaborate spread as part of the ancestral ritual. Songpyeon, which symbolizes the fruit of the heavens, was placed on the table along with other foods, including newly harvested fruit (of the earth) and taro (fruit of the underground) as a sign of appreciation and gratitude for the year’s harvest.

Although they are a Chuseok staple, all songpyeon are created equal; the shape, size and ingredients of Songpyeon vary by region. The following is a guide to the different types of songpyeon found across Korea.

Seoul-style songpyeon are colorful and small. Osaek songpyeon or five-colored songpyeon are traditionally dyed with natural colorants such as omija berries, gardenia seeds, mugort and grape juice. The rice cakes are filled with an assortment of ingredients including toasted sesame seeds and honey, sweetened mung bean or red bean paste.

Potato and acorn are staple crops in the Gangwon Province, so it comes as no surprise that the locals in this rugged mountainous region have traditionally made songpyeon with potato starch and acorn powder. When steamed, the potato songpyeon become half translucent. The songpyeon also have a distinct shape as well. They tend to be flat and have ridges from pressing down with the fingers; imagine what a small ball of dough would look like after having been gently squeezed in your fist. 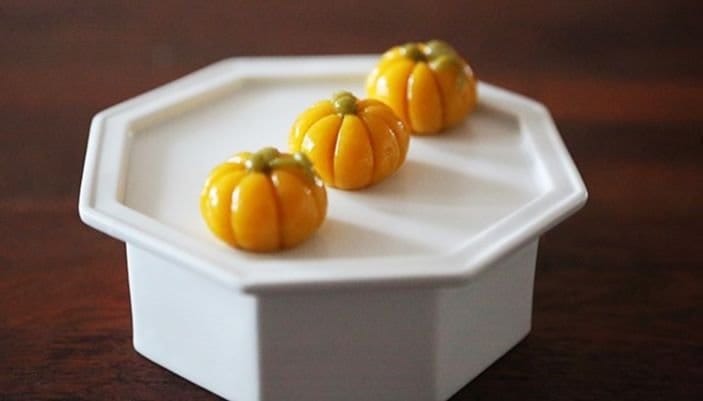 Chungcheong Province is know for its sweet pumpkin songpyeon, made with newly harvested autumn pumpkins. The pumpkins are sliced, dried and ground into powder. The pumpkin powder is mixed with non-glutinous rice powder and hot water to form the dough. Fillings can include chestnuts or roasted sesame seeds. Pumpkin songpyeon are visually appealing as they are made to look like mini pumpkins.

Gyeongsang Province-style songpyeon tend to be large and rustic looking, far from the dainty sophisticated rice cakes eaten in Seoul. The dough is made by mixing non-glutinous rice flour with the sweet and slightly bitter kudzu powder while the filling is commonly made with sweetened kidney beans or red beans. 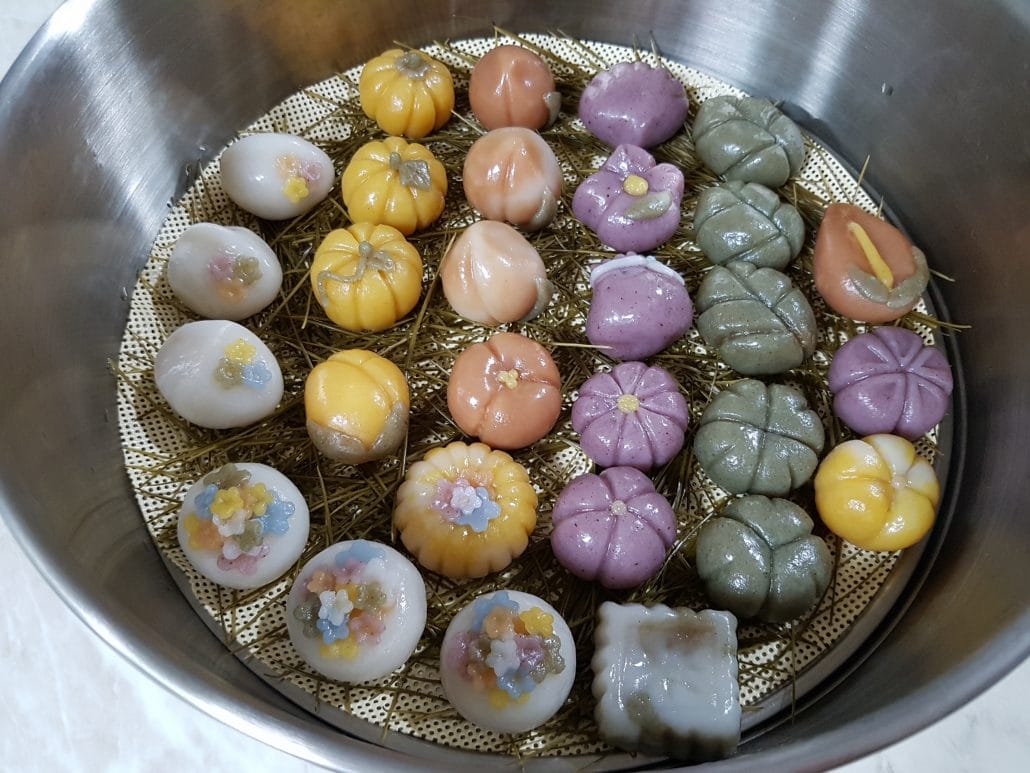 Jeolla Province is known for its beautiful flower songpyeon dyed with natural colorants such as omija berries, gardenia seeds, pine endodermis, mugwort or fruit juice. Each piece is elaborately made by hand or pressed into a mold to resemble flowers.

In Jeju Island, the traditional choice of ingredient for songpyeon filling is sweetened peas. The shape of Jeju-style songpyeon are reminiscent of a flying saucer. Some variations make the center concave to make it resemble a volcanic crater. It is common to pan-fry songpyeon in oil after steaming them.