Makgeolli, that milky alcoholic beverage Koreans have a soft spot for. Although similar beverages exist outside of Korea, most notably in Japan, makgeolli is a uniquely Korean drink, and the common customs associated with drinking makgeolli an integral part of the Korean food culture.

What exactly is makgeolli? Makgeolli, also referred to as takju (meaning ‘cloudy alcohol’), is Korean fermented rice wine. It is traditionally made with three ingredients: rice, a wheat-based Korean fermentation starter called nuruk and water. Other grains such as barley, wheat and corn are commonly used as well.

People who have actually tried makgeolli use words like “sweet”, “slightly sour”, “fizzy”, “thick”, “refreshing”, “grainy” and “chalky” to describe its characteristics. All true – to varying degrees – depending on the recipe. The taste of makgeolli is determined by a number of different key elements, including the type of nuruk and grains used, the ratio of grains to nuruk to water, fermentation temperature, fermentation period and the presence or absence of additives such as sweeteners. For instance, makgeolli made with glutinous rice tastes naturally sweeter than makgeolli made with non-glutinous rice. 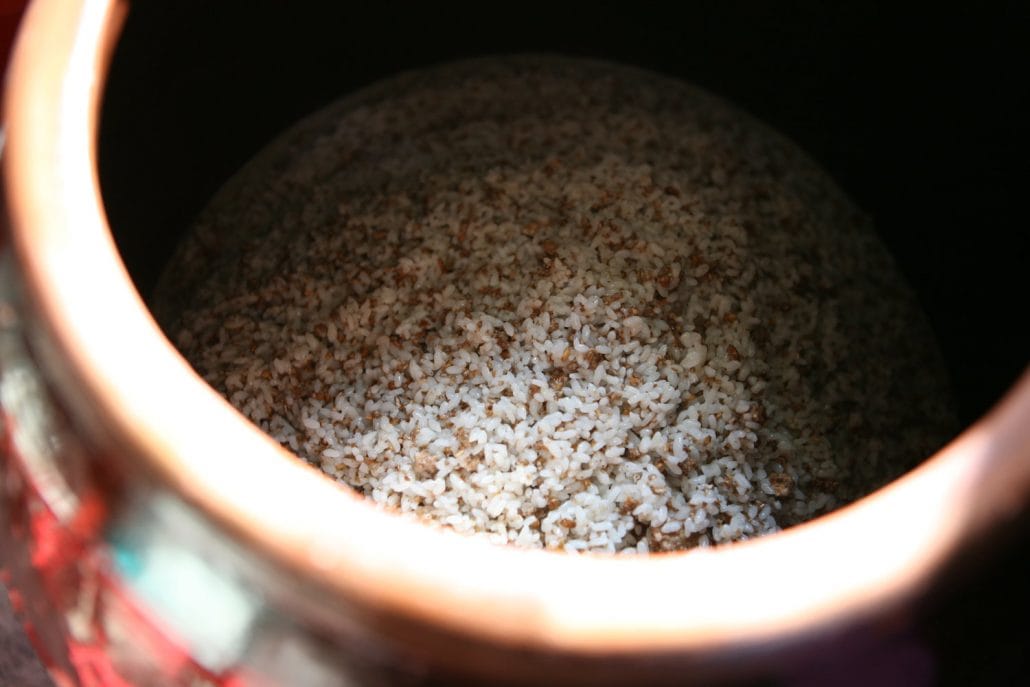 The most basic single fermentation makgeolli recipe requires mixing steamed rice–called godubap–with nuruk and water. The concoction is poured into a sterilized vessel, covered with a porous lid (to allow carbon dioxide to escape during the fermentation process), and left to ferment in a relatively cool area. Depending on the temperature, you will have makgeolli in about seven to ten days. The final step is to separate the alcohol from the solid residue by straining it through a fine mesh cloth. Because the alcohol is squeezed out from the residue, the final product ends up being milky white and cloudy.

Pretty simple to make, yes, but there are some important rules to follow when brewing makgeolli. One of them is temperature. Too cold and the fermentation will not start; too warm (above 25 degrees Celsius) and the concoction will turn into vinegar. Another important factor that can make or break makgeolli is a sterile brewing environment; one careless mistake and you will run the risk of spoiling the whole batch. 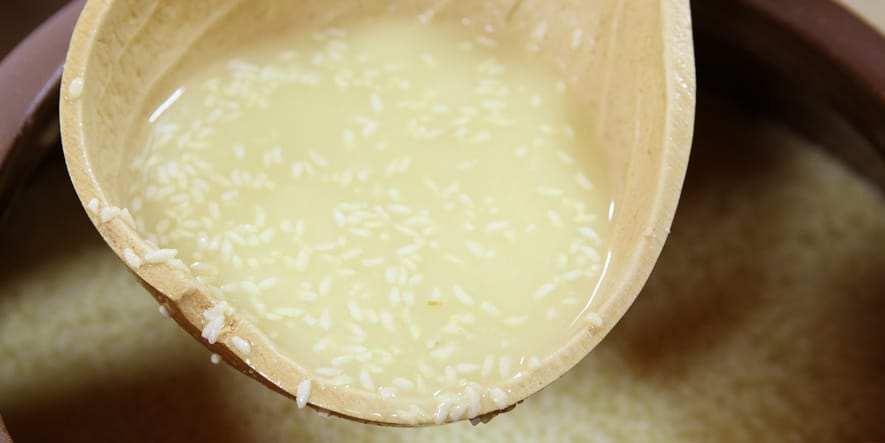 Makgeolli is good for you

Aside from the alcohol, the bulk of makgeolli is pure nutrition. Other than the 80% water and 6-8% alcohol, makgeolli is made up of 2% protein (includes 7 out of 8 essential amino acids), 0.8% carbohydrates, 0.1% fat and 0.6% dietary fiber (compared to 0.8% in tomatoes), along with vitamins B and C, lactobacilli and yeast. Makgeolli is unfiltered, so it contains high levels of lactic acid and lactobacillus bacteria – 10 times the level in yogurt. The beverage is also effective in quenching thirst, invigorating the metabolism and relieving fatigue. 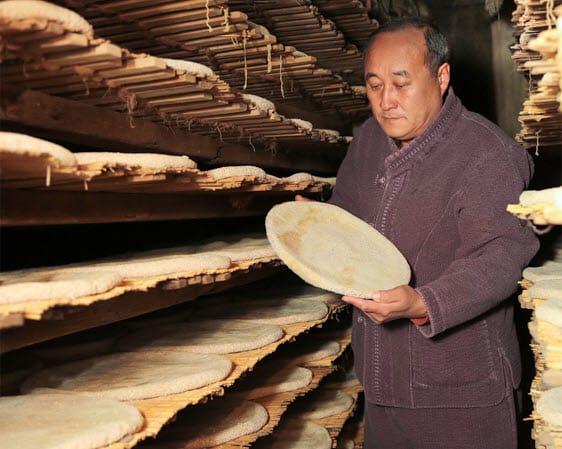 Makgeolli is Korea’s oldest alcoholic beverage. Historical records show that Koreans have been drinking makgeolli from as far back as the Goyreo Dynasty (918-1392). In fact, makgeolli was one of the most commonly consumed alcoholic beverages of the time. In his poem titled “The White Brew”, scholar Yi Kyu-bo (1168-1241) muses over makgeolli – the only drink he could afford to indulge in during his days as a commoner and the one drink he didn’t have the freedom to enjoy once he became a high-ranking court official. In the 40-volume ‘Illustrated Account of an Official Mission to Korea during the Xuanhe Reign’ written by Xu Jing (徐兢), an envoy from China’s Song Dynasty who stayed for more than a month at the Court of Goryeo in 1124, he states, “Goryeo people brew alcohol using non-glutinous rice as glutinous rice is unavailable here. The alcohol content is high, so one gets drunk quickly and sobers up just as quickly…Commoners don’t have access to the good-quality alcohol produced by the government, so they brew their own that is unsavory and murky in color.”

Like all aspects of culture at the time, drinking had been strictly segregated on the basis of social status, and makgeolli was a cheap brew made with surplus crops favored by farmers and the working class. Because of makgeolli’s low alcohol content and refreshing carbonation, it was customary–even until recent times–to serve farmers and laborers makgeolli during their break from intense labor. 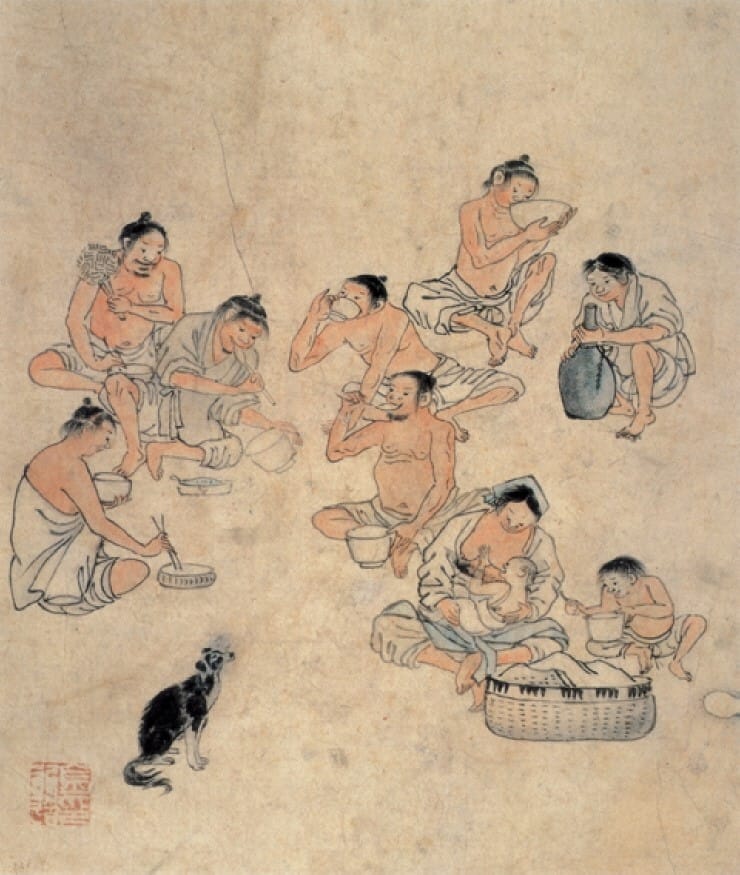 Up until 1988, makgeolli was the undisputed national drink of Korea, dominating the industry by 80%. But as the Korean society became increasingly more modernized and westernized, especially after the 1988 Seoul Olympic Games, people’s preference for alcohol changed as well.

As the demand for lager beers grew, so did the reputation of makgeolli as an old and unfashionable beverage. By 1995, makgeolli consumption had plummeted to an unprecedented single-digit level, continuing to drop to the 4-percent level in 2002. There seemed to be no end to makgeolli makers’ long nightmare.

Then, 2009 happened. Makgeolli made an unexpected comeback thanks to the emergence of new craft makgeolli recipes and clever marketing schemes that appealed to the younger generation. Millennials, who previously shunned makgeolli as a cheap and old-fashioned drink, came to embrace it.

The new-found fame of makgeolli also gave birth to “makgeolli bars”. With their sophisticated décor, an extensive list of craft makgeolli, and modern bar food offerings that extended beyond the staple bindaetteok, pajeon and tofu kimchi, these establishments succeeded in garnering a new generation of makgeolli fans. Makgeolli samplers – also something wildly new at the time – were not only elegant to look at, but also fun to drink and made attractive photographs for the social media.

That year, makgeolli sales–counting exports–surged by 48% year-on-year and went on to post a further 58% growth in 2010. Korea’s makgeolli consumption had surpassed the 10-percent level for the first time in 16 years. 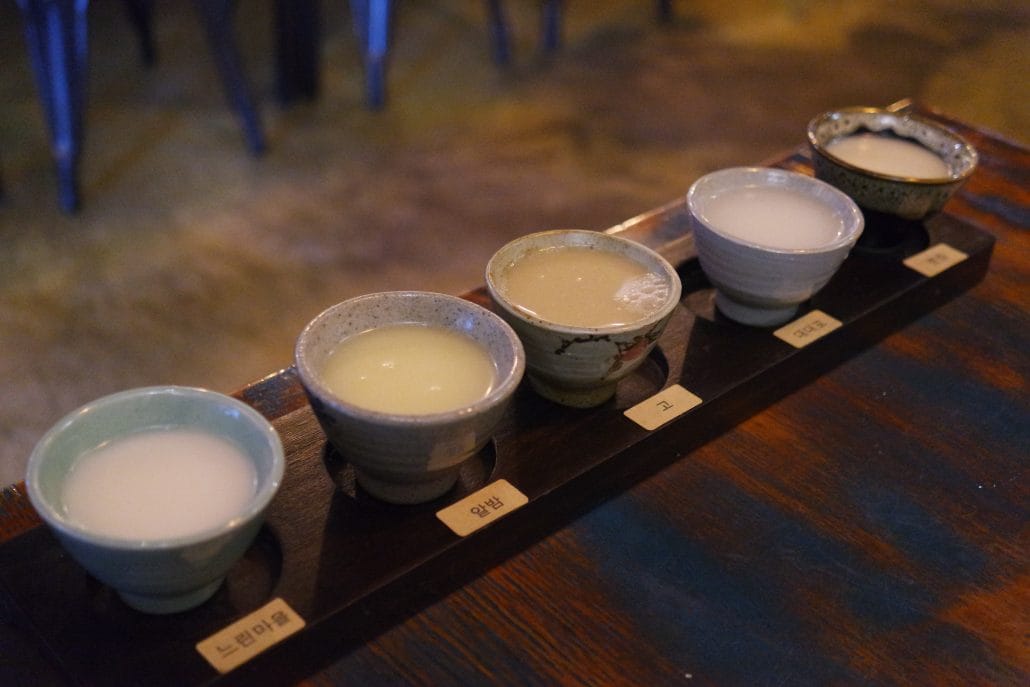 According to official records, there were 2680 licensed breweries in Korea in 1961. That number dropped by half in 1990 and continued to decline into the 21st century.

From 1965 until 1992, makgeolli production was highly regulated by the government. The percentage of grains used (based on the year’s surplus crops), alcohol content and distribution were all controlled by the tax office. But that ended in 1992 when the government eased regulations and allowed independent breweries to control production. Currently, there are 760 licensed breweries in Korea that produce over 2,000 varieties of makgeolli, each with its own unique blend of ingredients.

Similar to the way craft beers and wines are pervading the Korean market, traditional drinks — of which there were once more than 300 kinds before the Japanese occupation– are slowly regaining their foothold. In February, 2016, the government amended a liquor tax law to allow restaurants and microbreweries to concoct and sell their own alcoholic beverages. The revised law significantly lowered the bar for small-scale traditional brewers to enter the market by including traditional drinks in the list of microbreweries with a production capacity of 1,000 to 5,000 liters.

The consumers’ perception of makgeolli is changing as well. Makgeolli is no longer associated with the coarsely fermented farmer’s brew served in bright yellow nickel silver kettles in dingy old drinking holes. In 2017, makgeolli is an expression of history, pride, integrity, heritage, knowledge and tradition – a tradition that has become more relevant now than ever before. 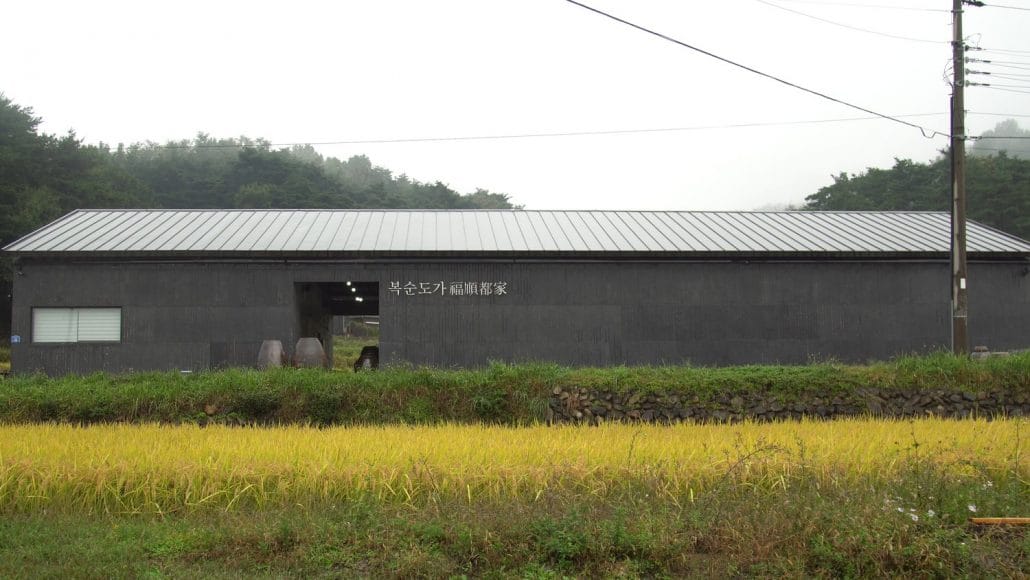 Boksundoga Brewery in Ulsan, on the southeastern coast of Korea

How to Serve Makgeolli

Makgeolli should always be served chilled. Drinking vessels tend to be on the smaller side – usually bowls made of ceramics, glass and even nickel silver.

The story of Soseoul Hannam is a narrative of flavors

From BBQs to soups, these dishes are how Koreans love to indulge in pork