Gimjang: Ain’t No Party Like a Winter Kimchi Party 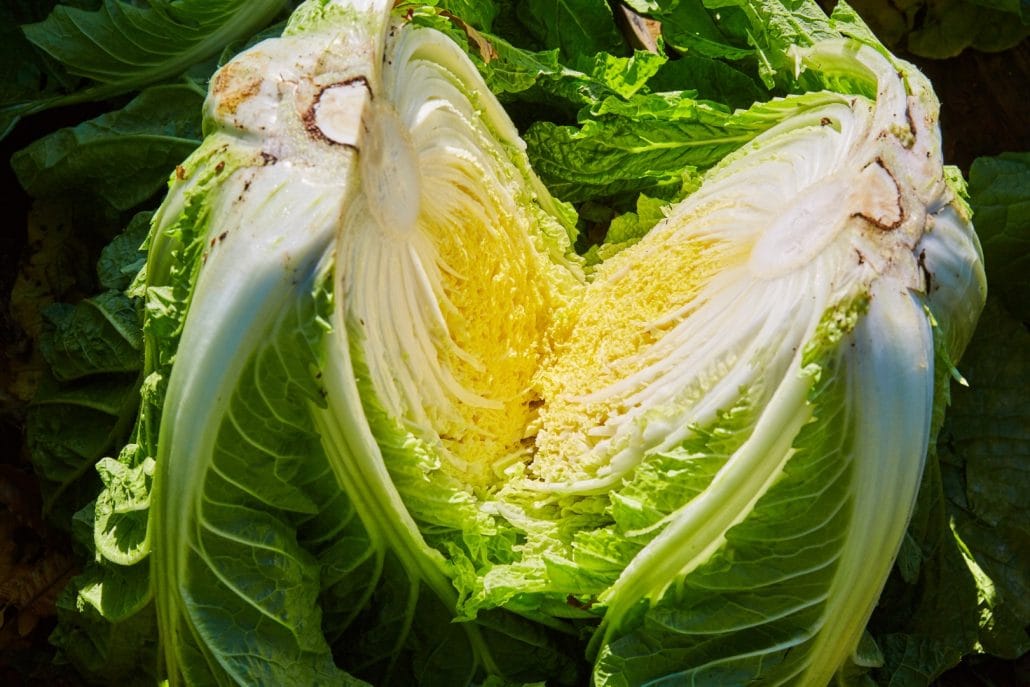 It is that time of year again. With the onset of winter, Koreans collectively roll up their sleeves to engage in a timeless ritual called gimjang.

Gimjang refers to the practice of making large quantities of kimchi—the fantastically sour, funky fermented vegetable side dish that accompanies every Korean meal—to consume through the frigid months. By “large quantities,” I mean as many as a hundred up to a couple of hundred heads of Chinese cabbage depending on the size of the family. It is a labor-intensive undertaking as the entire process is done manually and, oftentimes, squatting down.

Long before the invention of modern refrigeration, fresh produce was hard to come by during winter, and freezing temperatures made the laborious task of kimchi preparation considerably more challenging. So families and communities developed a practice of coming together to make enough kimchi to last until the following spring.

Thanks to modern technology and advanced farming methods, fresh produce is available all year round these days. But Koreans continue to purchase enormous quantities of cabbage in preparation for gimjang come November. While the younger generation prefers to buy pre-made kimchi, gimjang is still easily one of the most important family events in Korea after Seol and Chuseok.

In many ways, kimchi is more than just a beloved local dish; it is an integral part of Korea’s culinary fabric. The cultural importance of gimjang was even recognized by UNESCO when it listed the tradition as an Intangible Cultural Heritage of Humanity in 2013. 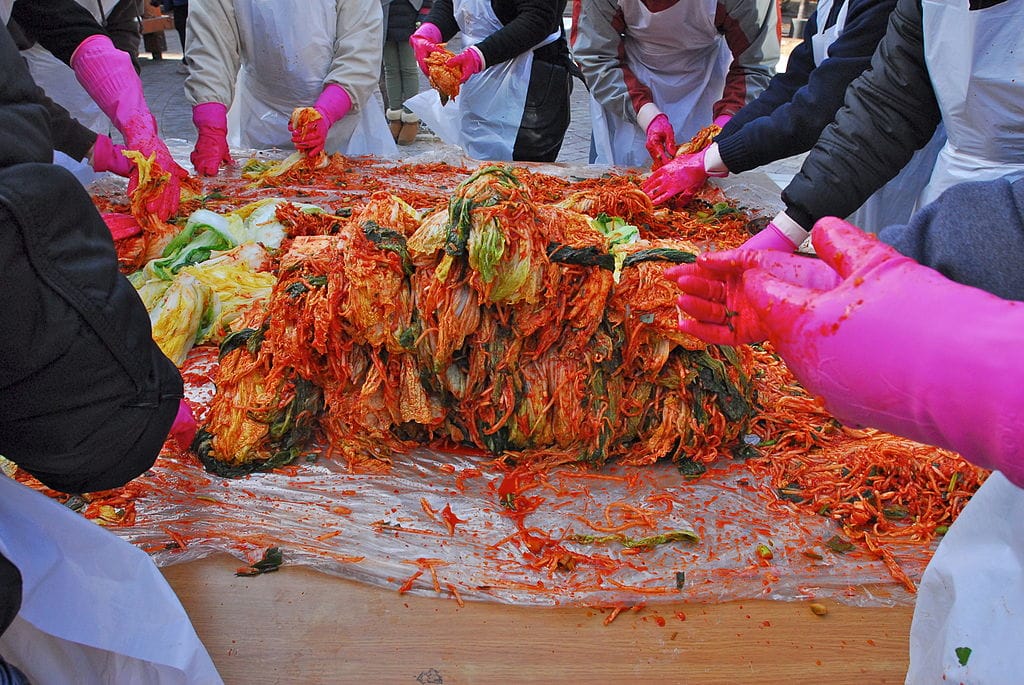 The ideal time for gimjang is when the average daytime high stays below 4 degrees Celsius and the average daytime low dips below the freezing point. If the temperature is too warm, kimchi will ferment too quickly and if the days are too cold, it will freeze. This year’s gimjang season is well underway and it will continue until late December for those in the warmer regions.

The first written record of gimjang is found in 13th-century literature penned by Lee Kyu-bo, an esteemed Goryeo Dynasty (A.D. 918 – 1392) scholar. Lee writes, “Radish pickled in soy sauce is good for three months in summer and salted cabbage for nine months in winter.” As the text shows, the earliest form of kimchi was nothing more than vegetables simply pickled in brine, soy sauce, or soybean paste. No mention of chili peppers here.

‘Eumsik Dimibang,’ one of Korea’s earliest cookbooks dating back to 1672, describes kimchi as a pickled vegetable dish containing pheasant meat and jepi (Korean peppercorns). Again, there is no mention of red chili peppers being part of the dish. This is because chili peppers were only introduced to Korea towards the end of the 17th century, and it was not until the 18th century that they made their way into kimchi.

Today, the most basic cabbage kimchi recipe calls for garlic, ginger, green onions, white radish, gochugaru (Korean red chili powder), jeotgal (salted and fermented fish or seafood), glutinous rice paste (or other types of starchy paste), salt, and sugar. The ratio of each ingredient varies from household to household. Each family has its own kimchi recipe, passed down through the generations – from grandmothers to mothers and mothers to daughters. Hence, no two versions of homemade kimchi will taste identical. 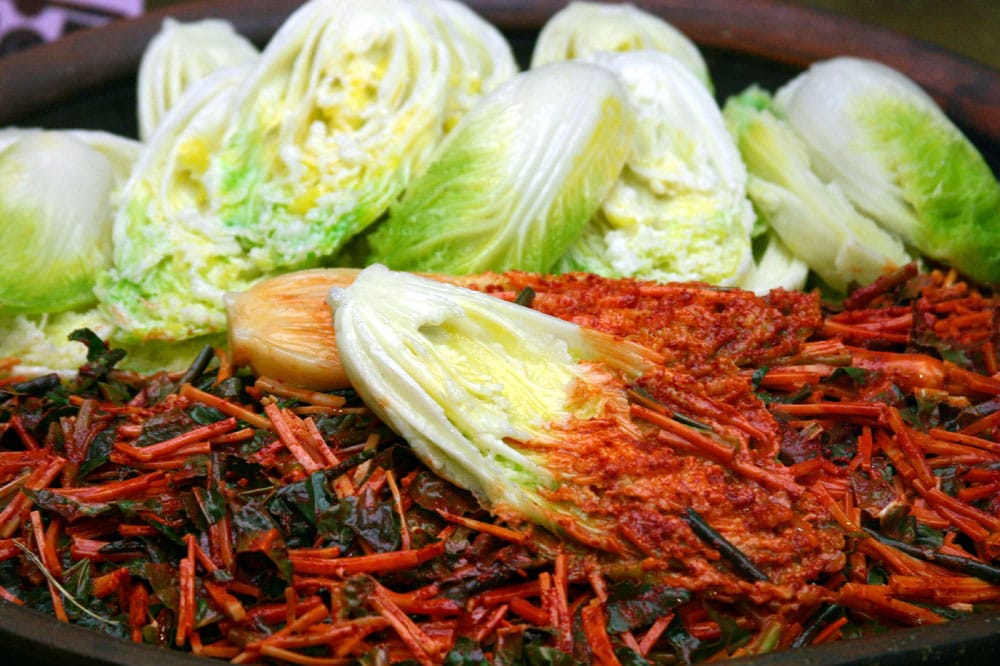 Each recipe dictates the presence or absence of certain ingredients, as well as their specific ratio. Some recipes call for, say, saeu-jeot (salted shrimp), while others list myeolchi-jeot (salted anchovies) as a key ingredient. Many households use a mixture of both. Of course, that is not to say that jeotgal used in kimchi is limited to just shrimp and anchovies; there are so many different varieties of fermented seafood in Korea. Fresh raw seafood, such as oysters, octopus or seasonal fish, may also be added to kimchi. My mother, for instance, throws in some sweet-fleshed prawns for good measure. Flavorful stocks are often utilized to add an extra depth of flavor to fermented kimchi. The stocks can be prepared with dried anchovies and kelp, and even ox bones. A chef I know likes to add the pulp of homemade yuzu syrup–instead of sugar–to his kimchi which imparts a delightfully zesty fragrance. Buddhist monks in mountainside temples make supremely flavorful vegan kimchi without the addition of animal-derived products.

In the old days, Kimchi was fermented in earthenware vessels called ‘hangari’ which were buried underground to ensure a constant temperature. Nowadays, every Korean household owns a kimchi fridge (or two). 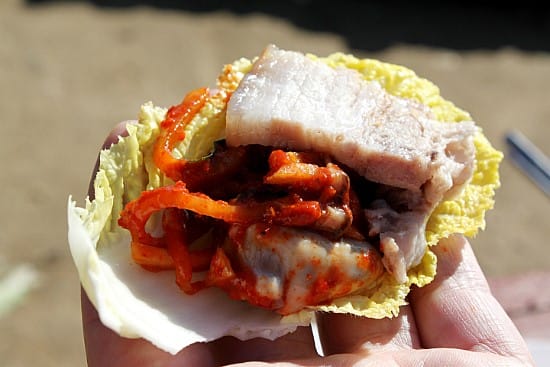 Sharing is the core spirit of gimjang. After a full day of washing, salting, rinsing, chopping, mixing and stuffing, a feast is sure to follow; steaming hunks of boiled pork belly are sliced and served with fresh oysters, leftover cabbage leaves, kimchi filling, and fresh kimchi. Both brined and fresh cabbage leaves make wonderful vessels to wrap the fatty pork in; smear some of the spicy garlicky kimchi filling on the pork and you have an edible parcel of joy.

At the end of the day, exhaustion will have overtaken you and your back will be aching from the hours of hunching over pungent vegetables, but your heart will be full from sharing with your loved ones and your mind at peace knowing that your kimchi fridge is fully stocked for the winter.